Colombia: A Country Torn Between Peace and Corruption

In Colombia, it is no secret that laws and rules there can be bent and moved around, especially with a couple of bills in your hand. Drivers know that getting stopped by road police is not really a problem, and that in the vast majority of cases, getting out of a ticket for any infraction should cost no more than a smile and 20,000 pesos (US$10).

For the past decade, Colombia has not only faced the horrors of a half-a-century-old civil war but also corruption from its armed forces and governing elites. 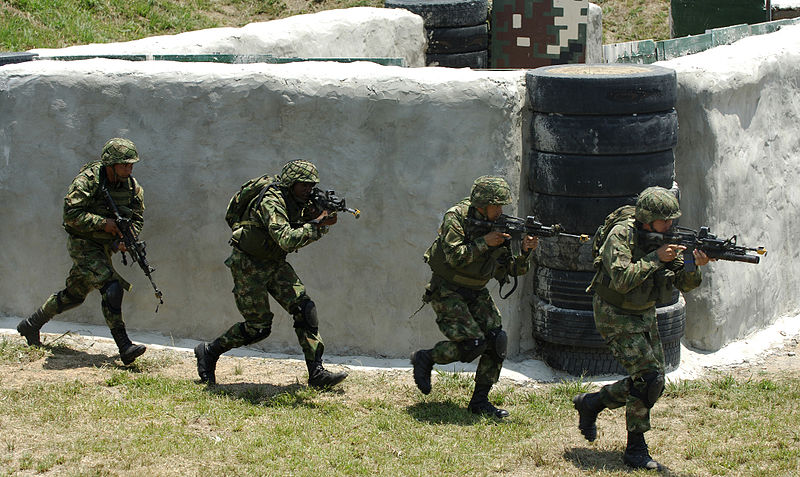 Special Forces During a Demonstration

Huge percentages of governmental funds designated for city development, healthcare, and schooling, seem to always be “lost”—or rather, stolen—by public officials who inflate the cost of the programs and then pocket the difference.  Mayors, city council members, and senators have become ludicrously rich while there is still no progress for the country’s lower classes. And impunity is common for the wealthy or powerful, who rarely pay penalties for their crimes, even when they are caught.

Most troubling are the corruption networks inside state bodies such as the Colombian Armed Forces. As in many countries, the population appreciates the military as the country’s defenders—a role even more important to a citizenry that has experienced civil war.

The army has had undeniable successes over the past decade. Ten years ago, traveling around the country by car carried a very serious risk.  Huge areas were controlled by Colombia’s Armed Revolutionary Forces (known as FARC), a guerilla armed forced group associated with narco-terrorism. Then, virtually every Colombian knew someone who had been kidnapped.

Today, thanks in large part to the military, traveling risks are lower, kidnappings are rarer, and FARC has lost a lot of power.

However, the armed forces and those in command continue to invoke the specter of FARC to accumulate and abuse power while escaping accountability.

The country’s gratitude and patience may be coming to an end, however.

As far back as 2008, one of the most egregious human rights violations in Colombia’s history came to light when citizens learned that innocent men, mostly from rural areas, were being killed by Colombia’s military. 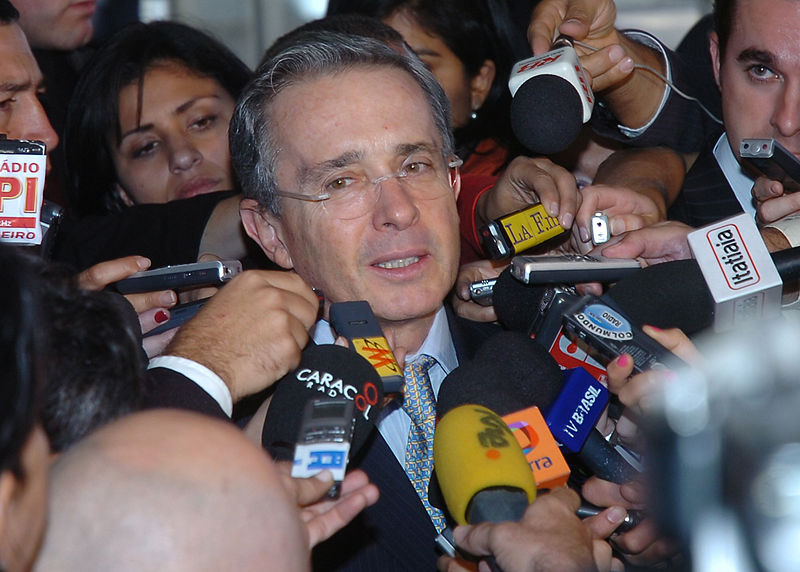 Former President Alvaro Uribe, Talking to the press in 2008

Under Alvaro Uribe’s administration the armed forces needed to show they were successfully going after the FARC. To improve the body count numbers, they began passing off murders of innocent peasants as successful attacks on guerrillas.

More than 5,000 such murders have been confirmed. Officials have attempted to justify these deaths by using the euphemism “false positives” to describe the horrendous crimes, implying, “oh, we just made a mistake.”

Latest Scandal Inside the Military

Probably the most damaging of the published conversations was between the former armed forces chief, General Leonardo Barrero and Colonel Robinson Gonzalez, now in prison awaiting trial in connection with the murders of two civilians.

Barrero is heard saying: “Don’t let those (expletive)(prosecutors) (expletive) you over… Form a mafia to denounce and make counter-allegations against prosecutors who are probing us and all that (nonsense)”.

Colombian president Juan Manuel Santos sacked Barrero after the transcripts were published. But the fact remains that conversations like this one reflect an abominable lack of awareness about severity of the extrajudicial killings, as well as what truly went on inside the armed forces. 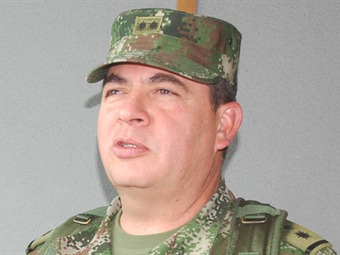 The transcripts also revealed that despite being charged with crimes as serious as murder, the officers imprisoned in 2008 received unimaginable privileges. The very fact that they had cellphones inside their jail cells is illegal in itself, but what the recordings exposed is much more troubling.

One of many examples is Colonel Gonzalez, whose personal phone records reveal his time in jail entailed very little inconvenience. He had personal cars and drivers , and could leave the prison when he pleased, including three weeks in December of 2012 when he spent the holidays with his family.

Gonzalez has been recorded talking to his junior officers, who offer him rifles to sell or arrange the purchase of guns—adding arms trading to the list of crimes being committed right under the government’s nose.

In the past month, more than a dozen generals from the police, air force, and army have been dismissed or sent into retirement. The move to sack essentially the entire military leadership can be seen as an overly simplistic “quick fix” to a much deeper issue, of government and military corruption.

Implications for the Peace Negotiations

For almost two years now, the government and FARC have engaged in peace negotiations in Havana, Cuba. This effort has been extremely controversial, with public opinion torn down the middle.

Some believe in achieving peace through diplomatic channels, and are willing to allow some impunity if it means ending the war and dismantling the guerrillas.

Others are adamantly opposed, including the Armed Forces and former president Alvaro Uribe, who has constantly bashed Santos’ administration. A large segment of the public is also either opposed or skeptical about the negotiations, including those who believe that FARC should pay for what it has done.

After hearing the leaked recordings, it is much easier to understand the real reason why the military is so opposed to the Havana peace talks: firstly, because they are enriching themselves though the conflict, but more importantly, because that would mean that they too will be scrutinized and held accountable for war crimes and human rights violations.

The only real solution to the very deep-seated corruption issues will require leaders to stop focusing on political ends and silencing the public with “quick fixes” that allegedly target guerilla groups but lead only to further crime, murder, and corruption.

How is a mother, whose 16-year-old son was killed by the very men who swore to protect him, meant to react after listening how the murders are paying their sentence? 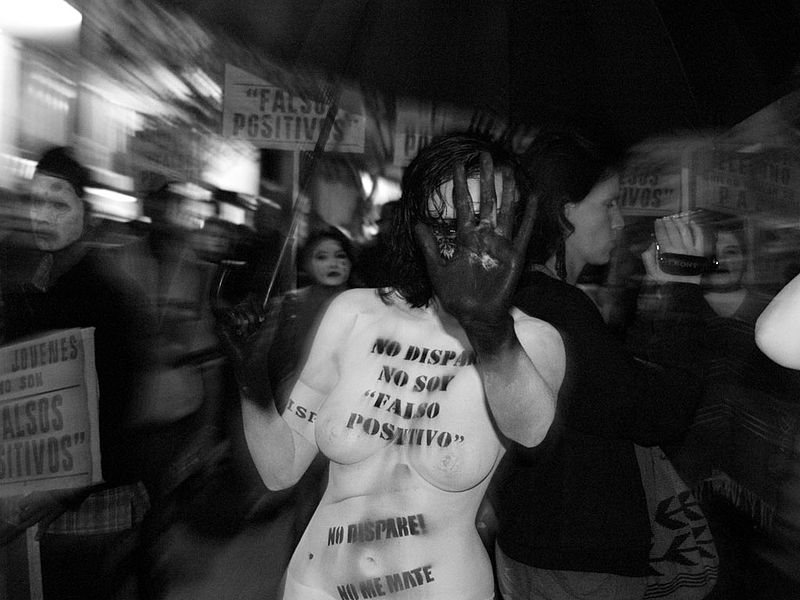 Protest by artists and victim's mothers, against the "false positives" in Bogota

Below is an excerpt from a letter sent to President Santos on February 20th by a group of victim’s mothers:

“Mr. President, if we must give our lives in seeking that the state give us what we deserve, we are willing to accept that sacrifice, because our love for our children is greater than your terror. Because we will no longer accept humiliation from your government, as it covers up or rewards the murderers of our loved ones.”

Their outrage should be shared by every last Colombian, who should demand a final end to the vicious cycles of impunity and flexibility for whomever has either money or high ranking.

Sadly however, Colombian’s have always seemed to suffer a kind of political amnesia that has prevented the people from demanding accountability, but even worse, has perpetuated the same elites and political groups in power.