Myanmar security forces appear to be using surveillance technology sourced from European and North American companies against civilians who have spent months protesting against a military coup. 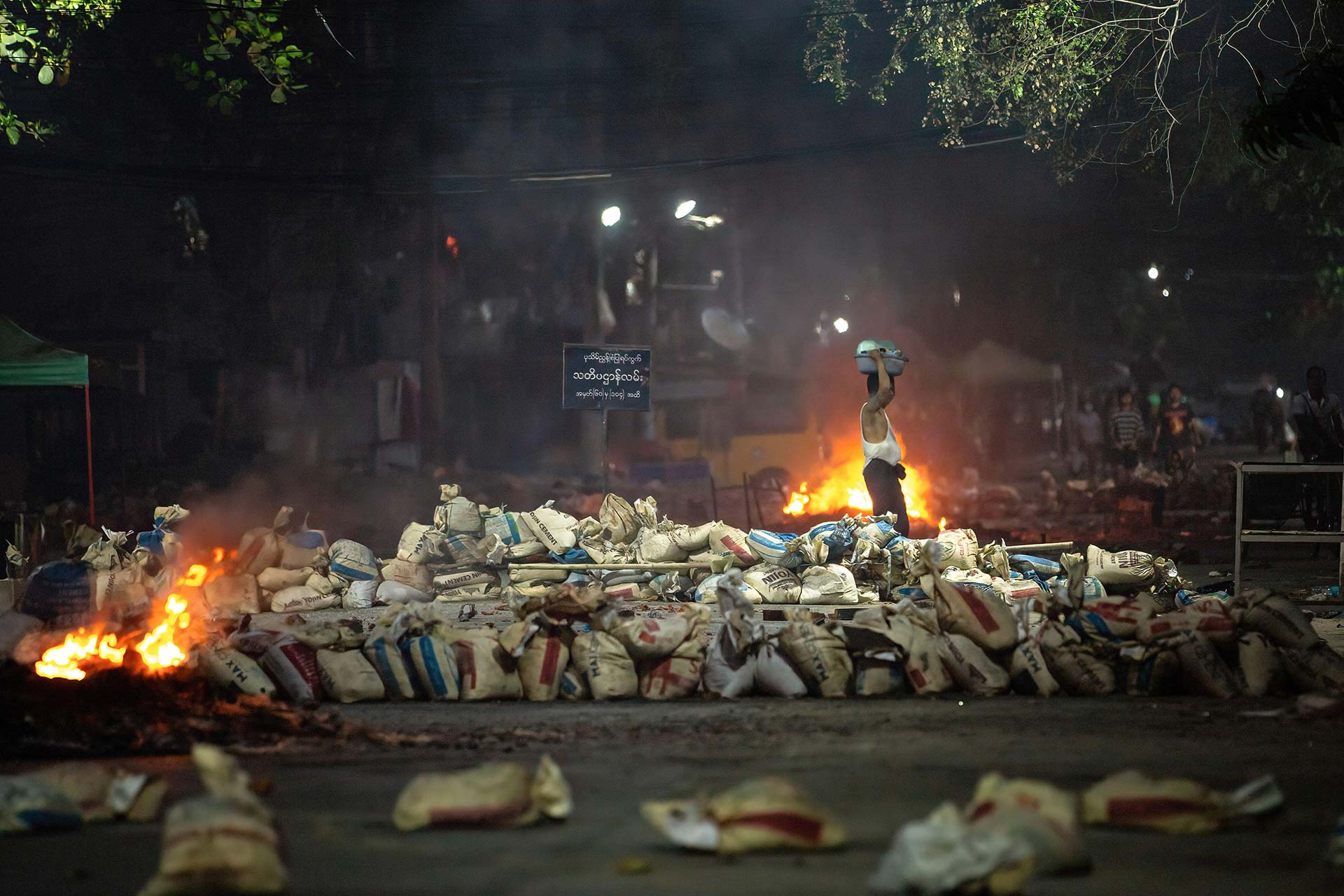 Protestors barricaded a street in Yangon on March 27, 2021, in a showdown with police who used live ammunition and tear gas. (Credit: Sipa USA/Alamy)

At least 863 people have been killed by security forces since the February 1 power grab, which ended Myanmar’s decade-long experiment with democracy after almost half a century of unbroken military rule.

On Monday, ousted civilian leader Aung San Suu Kyi, who has been in house detention since the military seized control, faced her first day of a closed-court trial on what critics say are trumped up charges designed to stop her holding office.

Almost 5,000 people have been arrested, charged, or sentenced as part of the crackdown on nationwide protests, according to the Assistance Association for Political Prisoners, a Myanmar civil society group.

Some of them may have had information extracted from their phones by security officers using digital forensic technology bought from Western companies before the coup.

“After seizing the phone, they check all of the data on the detainee’s phone. They even check people’s phone on the bus or vehicles in their checkpoints. They check Messenger, Viber, Facebook status,” Ko Ting Oo, a pro-democracy activist, told Canada’s Globe and Mail newspaper.

The revelations are based on leaked Myanmar government ministry budgets and other documents, as well as interviews with technology experts and people detained by security forces. The documents were provided by the activist group Justice For Myanmar to the surveillance newsroom of Lighthouse Reports, which initiated an investigation by several media organizations including OCCRP.

Two Canadian companies, OpenText and Magnet Forensics, told the Globe they had sold digital technology that can extract and decrypt deleted data and other information. The sales took place before the coup, and do not appear to have violated Canada’s arms embargo. Both companies said they have since halted further sales.

The type of digital forensic technology acquired by Myanmar security forces is used by police and other authorities around the world to target criminal networks. But rights advocates warn that such tools can be dangerous in the hands of agencies such as those in Myanmar, which have been using brutal methods to quell dissent.

“This type of technology ends up being used adjacent to torture and other serious human rights violations,” said John Scott Railton of Citizen Lab, a technology, security, and rights research center at the University of Toronto.

“For example, the information gleaned from phones through the use of digital forensic tools may be used to convict a human rights defender or a journalist of crimes in their jurisdiction,” he told OCCRP.

One detainee told journalists that police assaulted him and then demanded he unlock his phone.

“When they first caught me, about 30 just beat me up quite badly. They also dragged me on the road for about 100 meters and I think I lost consciousness,” he said.

Police could have extracted information from his phone using technology made by Sweden’s MSAB, The Intercept reported.

The company said it had sold the equipment to Myanmar’s civilian police force. Leaked 2019 budget documents show that funds were allocated to a cybercrime office of the Ministry of Transport and Communications, which collaborates with police.

Sales made by some companies could violate the European Union embargo against providing equipment to Myanmar’s military that could be used for repression, including so-called “dual use” products that have both civilian and military functions, Italy’s Domani newspaper reported.

Among the 40 Western technology companies in the leaked budgets is Italy’s SecurCube. The company had previously said it did not sell directly to Myanmar, but intermediary firms that purchased SecurCube technology appear in the documents, according to Investigative Reporting Project Italy (IRPI).

An Al Jazeera documentary on the program 101 East sheds further light on how the Myanmar military is using digital surveillance, abductions and covert interrogation facilities.

Just months before the coup, OCCRP reported that Myanmar’s military had been stepping up efforts to acquire equipment ranging from German-made software to military and civilian planes manufactured by the European aerospace giant Airbus. After the military seized power, one company said it had cancelled a contract with the military to refurbish an aircraft with “VIP configuration” features.