Russian oligarchs around the globe are facing sanctions, and all eyes are on the vast wealth of Vladimir Putin’s inner circle. Besides the glitzy French villas and multi-million-dollar superyachts docked in Barcelona and Monaco, this mega-rich crowd is known for its private jets.

OCCRP has long tracked the flight paths of the powerful, but as more countries block Russian flights from their airspace, plane tracking is more useful than ever before in helping us monitor sanctioned individuals and examine their next moves.

What is plane tracking?

OCCRP investigators who track planes are looking at two things:

Identification is often the more difficult step, because it’s common to use shell companies and other secrecy mechanisms to conceal the true ownership of assets like planes. That’s where #2 comes in: Tracking a plane’s whereabouts can help identify who uses it, and lead us to its owner. Matching a plane’s movements with proof that a person of interest has been in the same areas can be a crucial piece of the plane-tracking jigsaw.

Why does OCCRP track planes?

OCCRP follows the money of the world’s corrupt. This involves tracking down the assets, including private jets, that these people have purchased with their dubious gains.

Right now we are paying particular attention to planes owned by Russian oligarchs, but registered outside of Russia. We do this to monitor whether they continue to fly freely, and to take note of where they are, or may be, headed. It’s clear that clampdowns are having an effect. For example, after the U.K. imposed new rules on Russia-connected aircraft, the Isle of Man, a popular aviation haven, de-registered at least 18 private Russian jets and helicopters. 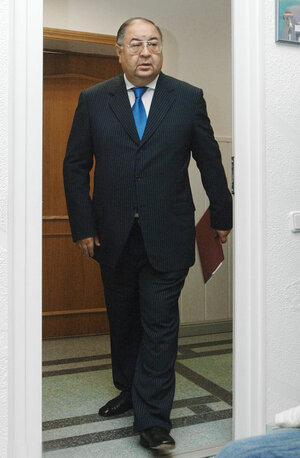 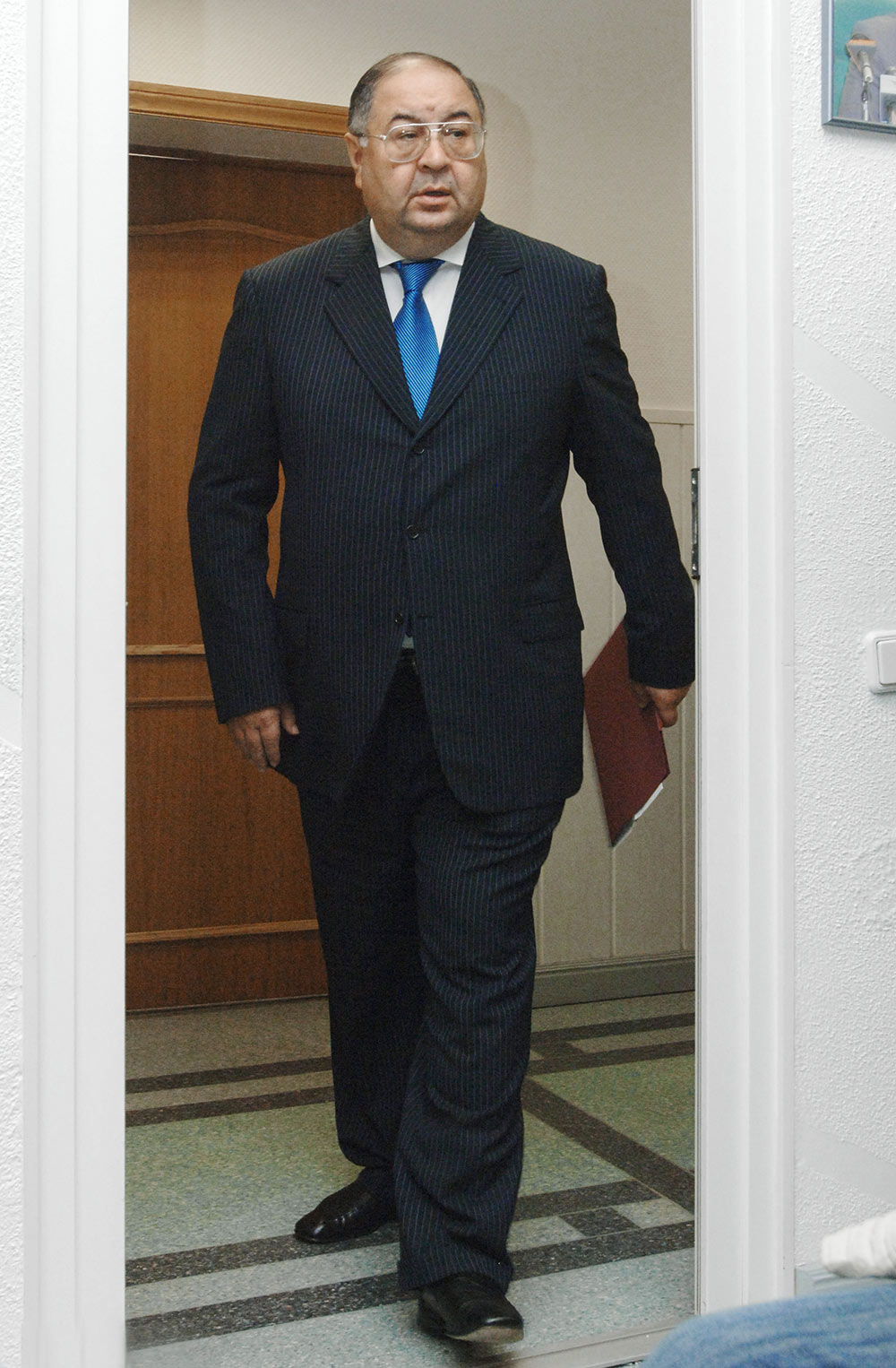 Among these is a Airbus A340 plane believed to be owned by the Russian billionaire Alisher Usmanov. It flew from Germany to Uzbekistan on February 28. Three days later, it was de-registered in the Isle of Man. Meanwhile, fellow billionaire Alexei Mordashov apparently took his Bombardier Global 6000 from the Seychelles to Moscow, and one day later it was also scrubbed from the Isle of Man registry.

We say “apparently” because, although the Bombardier Global 6000 is widely reported to belong to Mordashov, the official owner is a company registered in the Isle of Man called Springtime Limited. The firm was incorporated in 2015, around the same time the jet was registered, and has since had a revolving door of Isle of Man-based directors. Many planes have complex ownership structures designed to keep their true owners hidden.

Unlocking the key to a plane’s ownership can lead journalists to new insights. In this story, business jets linked to Evgeny Prigozhin, a close associate of Russian President Vladimir Putin, provided clues about what he was doing in Africa. We also used flight-tracking data to better understand how the U.S. government used Kenya as a launchpad for surveillance planes supporting airstrikes in Somalia.

How can I track a plane?

There are many commercial flight tracking services that allow you to trace the real-time and historical movements of commercial and private aircraft, including FlightRadar24, FlightAware, Plane Finder, and Radar Box. Giancarlo Fiorella at the investigative outlet Bellingcat has written up a detailed description of what each service offers.

These websites mostly collect signals from a public high-frequency radio band that’s primarily used by air-traffic control systems and other aircraft. This is known as the Automatic Dependent Surveillance-Broadcast (ADS-B) system.

But governments and individuals can request to have their plane’s data redacted from these services, and they normally comply with these requests. To get around such measures, OCCRP relies on data providers like Icarus Flights, from the Center for Advanced Defense Studies (C4ADS), and the OpenSky Network, both of which provide uncensored global flight tracking data. Icarus’ data goes back to 2016 and is provided by ADSB-Exchange, which dubs itself the “world’s largest source of unfiltered flight data.” 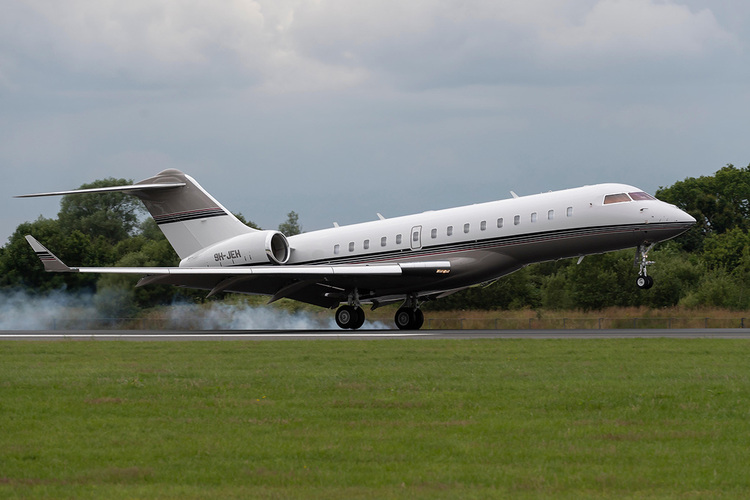 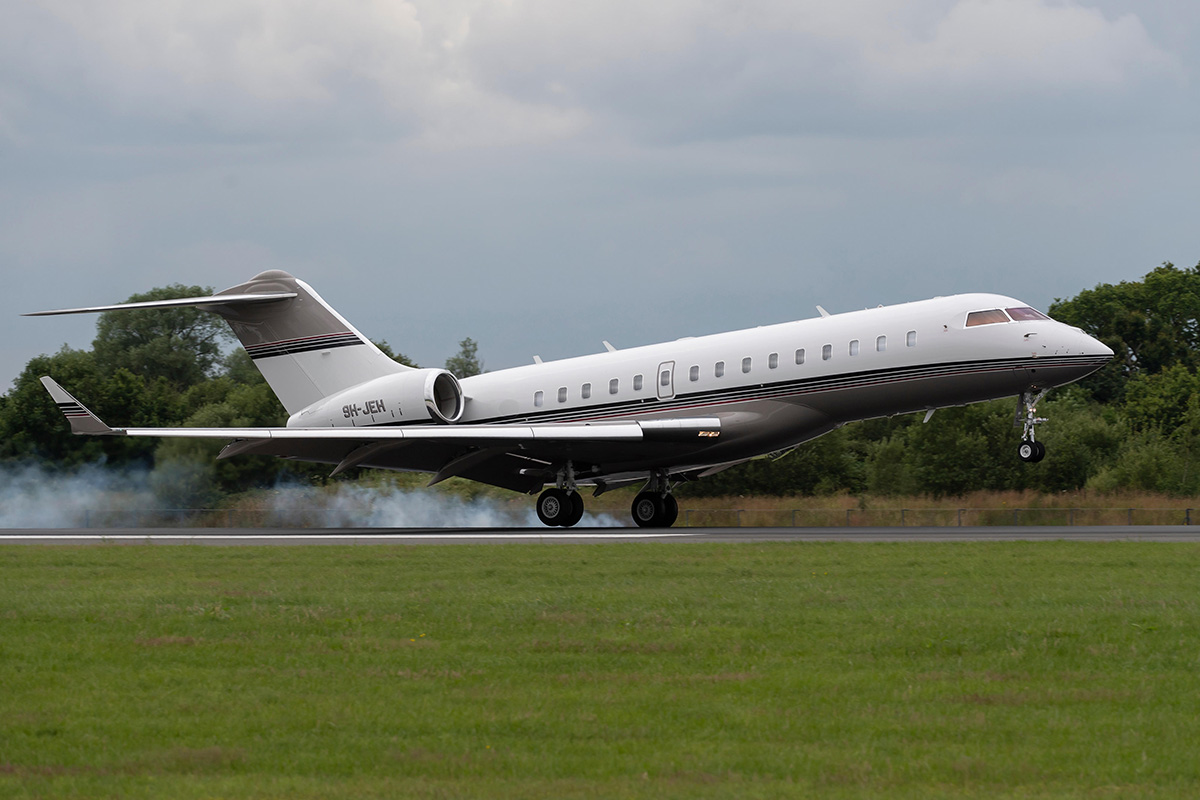 These open source providers rely on data from receivers set up around the world by hobbyists and volunteers, meaning the quality and scope of coverage varies by location. To help increase ADS-B coverage in any given location, you can volunteer to set up a receiver. If you’re interested in getting started, OpenSkyNetwork explains how you can buy, build, or get a free receiver. Similarly, C4ADS will supply ADS-B equipment to anyone who volunteers to set up a station.

A few things to note:

How do I find out who owns a plane or where it’s going?

Whether you are finding the owner of a plane or tracking where it’s been, collect as much identity information as possible. To find the owner, you’ll need the aircraft’s registration, often referred to as the tail number. This is the unique identifier, usually near the tail of the plane, which indicates where it was registered. A full list of country identifiers can be found here.

Although some places (including the U.S. and the Isle of Man) make plane ownership information available through searchable public registries, the registered owner is rarely the beneficial owner An ultimate beneficial owner (UBO) is the person who profits or benefits from a corporate entity. . Instead, it’s often a shell company, trust, or charter company. In cases like these, we need additional sources. Leaks like the Panama Papers and Paradise Papers have helped journalists link individuals to offshore companies, a number of which own private jets. Photos posted on social media are also a great way to connect people to planes. 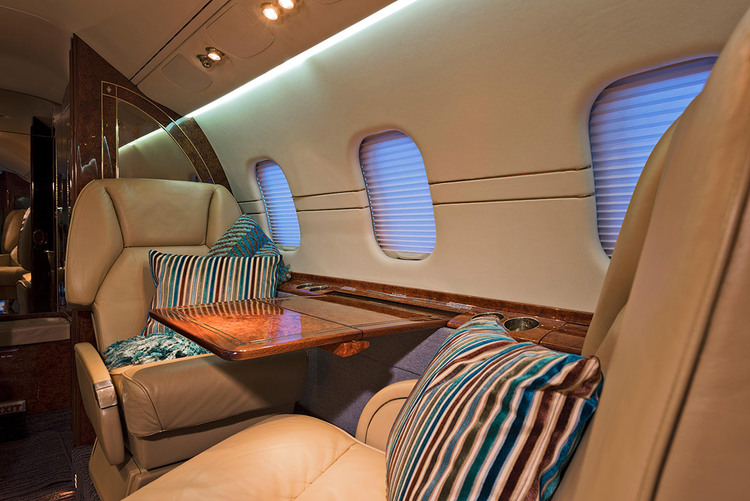 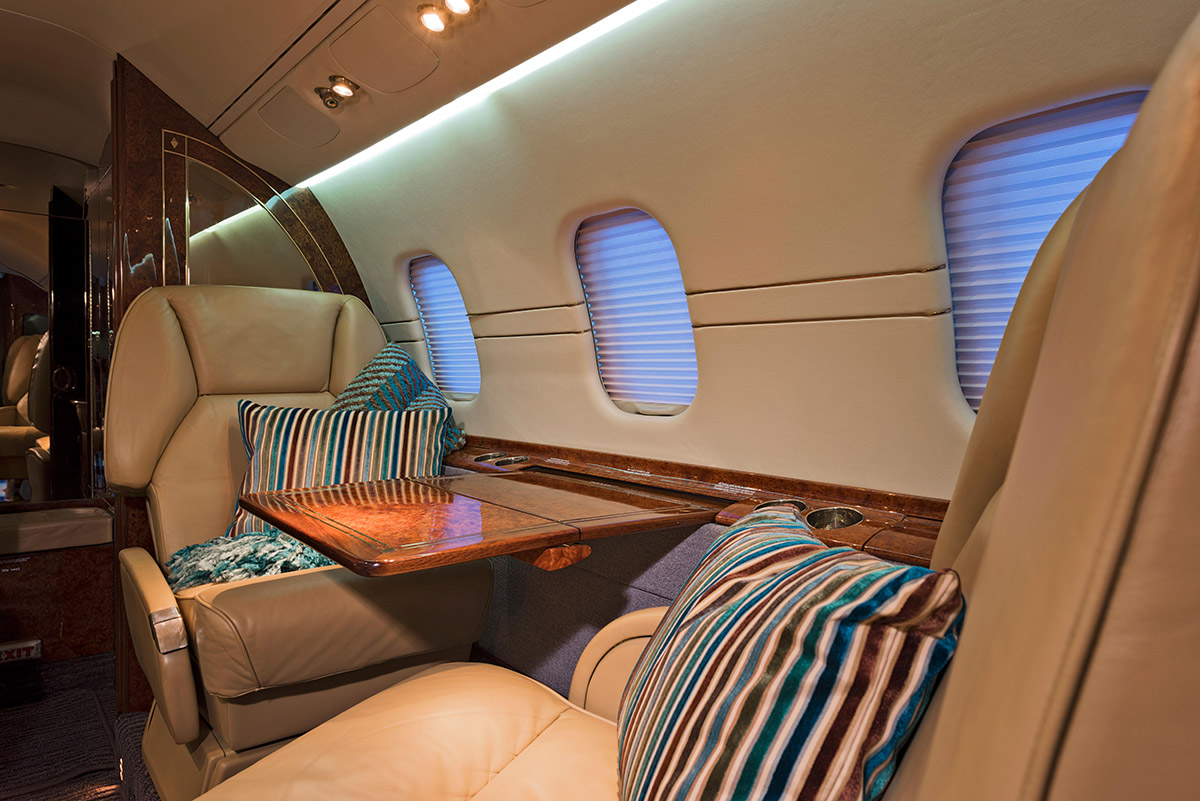 Credit: Alamy The interior cabin of a Lear 60 jet aircraft.

When a plane is registered, it is often issued a unique code for its ADS-B transponder called a Mode-S hex code, or ICAO, which provides flight tracking data such as position, altitude and speed for aircraft equipped with transponders. Since most aircraft don’t broadcast their registration numbers over ADS-B directly, most flight tracking websites link the transponder codes to registration numbers to make sense of tracking data.

As planes change owners or registered jurisdictions, identifiers like their registration and Mode-S hex code will also change. Therefore, if you’re trying to track a plane over multiple years and ownership changes, you’ll need to know the manufacturer’s serial number, the unique identifier assigned by the plane’s manufacturer. This never changes.

The last identifier you should know about is the call sign, which aircraft use to identify specific flights. For private aircraft the call sign is often the plane’s registration number, and for commercial flights it is usually the airline code, plus the flight number. You can use the International Air Transport Association website to decipher the airline codes you see on particular call signs. Keep in mind that the same aircraft can have multiple call signs in a single day, and different aircraft can have the same call sign over the course of a few days, too.

There’s no one-stop shop for obtaining a plane’s identifying information, so it’s important to use everything in your toolbox to get what you’re after. Start by Googling what you do know, and use websites like Plane Logger, Airframes, Rzjets, and Antonakis Spotters. Be warned: these sites can fall out of date or hold inaccurate information, so always try to corroborate what you’ve found with as many resources as possible. 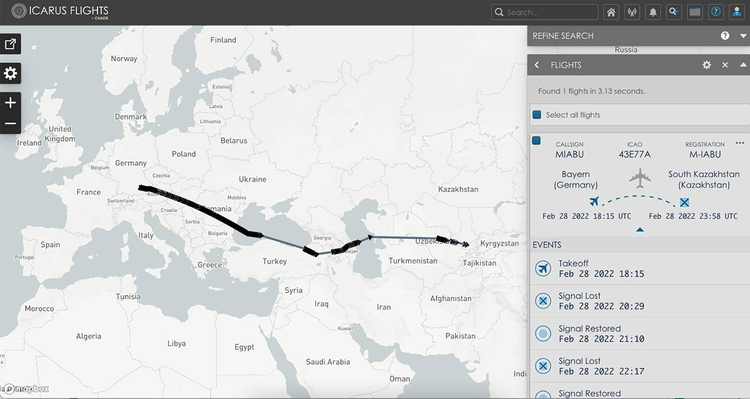 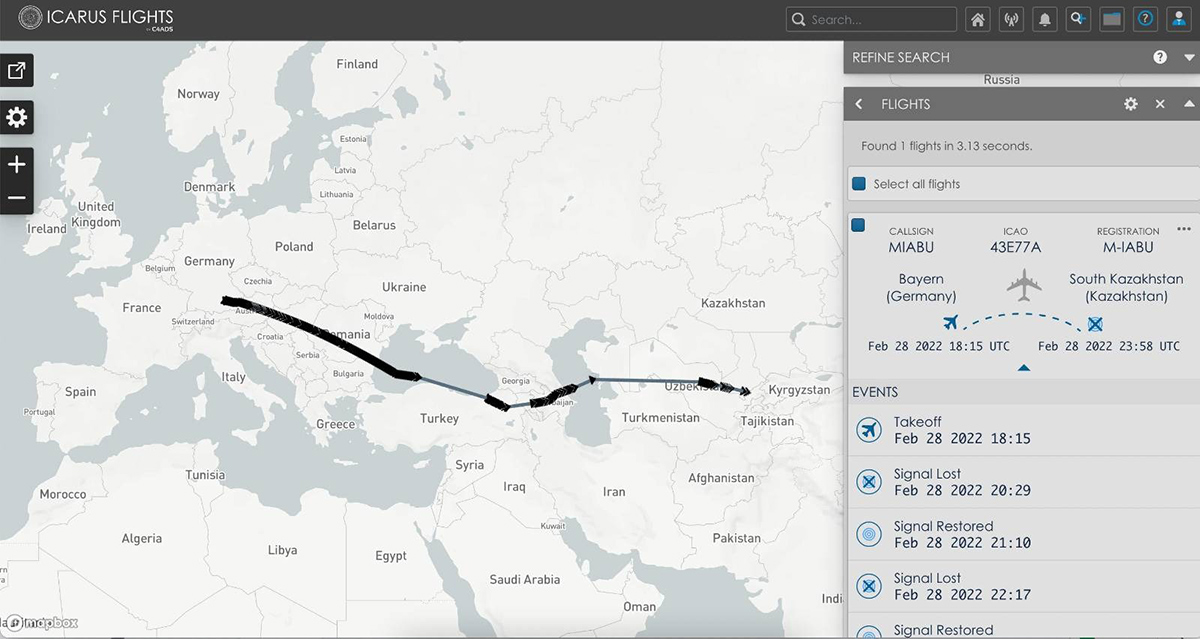 Credit: icarus.flights A plane belonging to Alisher Usmanov is seen on Icarus Flights moving from Germany to Uzbekistan.

Finally: have you tried Twitter or Telegram? There are lots of plane-tracking hobbyists on these sites who post information on aircraft they spot. These enthusiasts also often share their photos on plane spotter sites like planespotters.net and jetphotos.com. Locations, dates and times are almost always included, offering you potential gold dust as you track your aircraft.

For more detailed explainers on how to track planes yourself, the Global Investigative Journalism Network has compiled a comprehensive guide for beginners.

How does journalistic plane tracking work in practice?

We suspected that the aircraft was used by Nazarbayev himself, as part of a huge bank of assets supposedly owned by charitable foundations, but actually benefiting the ruler. But we needed to prove it.

Using only the import date and the plane type listed on the document, researchers were able to zero in on the exact plane using Icarus Flights, which lets you filter by plane type and take-off and landing location. It turns out there had been only one Airbus ACJ320neo flying around Kazakhstan’s airspace since June 2020.

Some further digging into the Mode-S ‘hex code’ of that plane showed the aircraft had been re-registered in Kazakhstan around the same time it was imported. 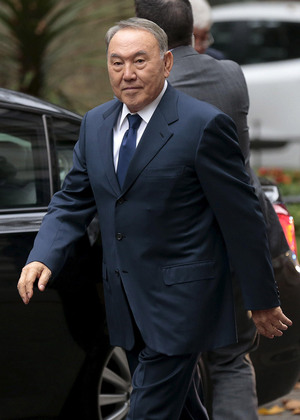 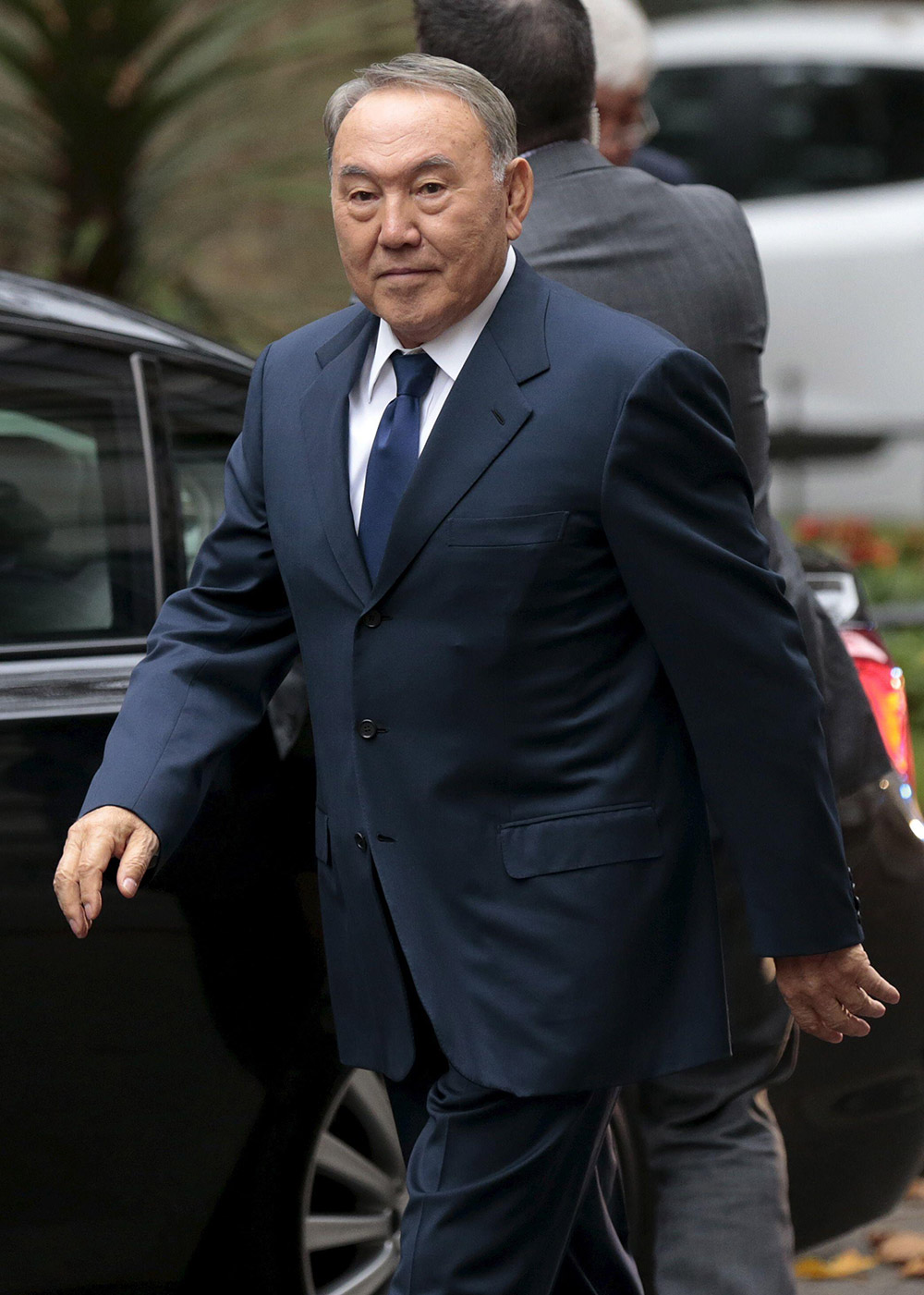 Once the plane had been identified, there was still more work to be done. We needed to know who was using it. While Icarus Flights has good data, it relies on sensors set up by volunteers, so the coverage isn’t always complete. For this particular plane, Icarus was only showing three flights total.

With this in mind, our reporters pulled flight data fromOpenSkyNetwork, which identified many more flights that the plane had taken since it was imported into Kazakhstan. This information was the ultimate smoking gun, as reporters were then able to match Nazarbayev’s official movements with three trips the plane had taken, to Moscow and within Kazakhstan.

The end result of all this plane tracking? The Airbus became a key chapter in a recent investigation on Nazarbayev’s assets.

How can I help?

Internet searches for recent images or video footage of oligarchs, or similar persons, arriving or departing from specific airports are extremely valuable. Even better, send us images or videos of oligarchs exiting or entering planes. If the plane’s tail number is visible, that’s the jackpot. Sharing information will help us develop a growing body of evidence to follow the money, wherever it may fly to.