On the night of Oct. 13, 2016, Aleksandar Stankovic’s car pulled toward an intersection in Serbia’s capital, Belgrade, sliding to a halt beside a darkened BMW where two men sat inside unseen, cradling automatic weapons. 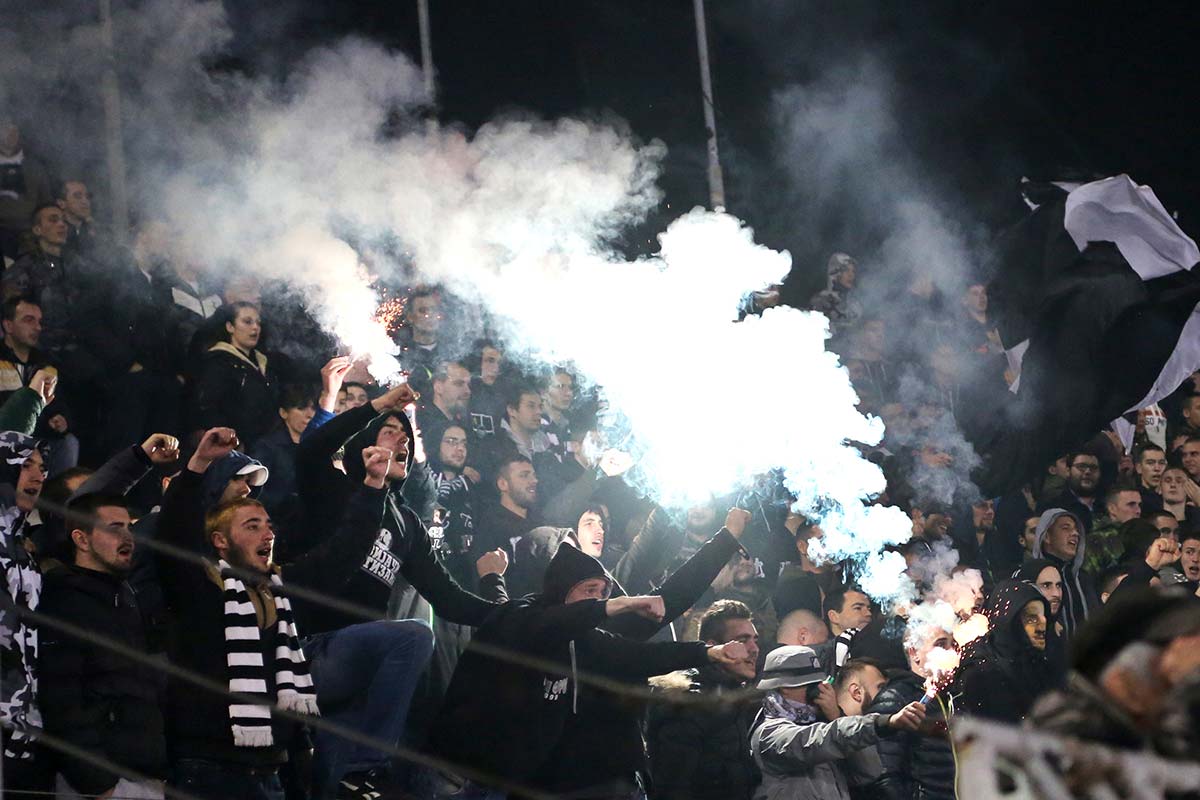 FK Partizan supporters light flares in the stands during a match in Belgrade (Photo: Aubrey Belford)

From the inside of their car, the men raised their weapons and sprayed nearly two dozen bullets at the 29-year-old, instantly killing him and wounding his bodyguard, before speeding away.

The burned out hulk of the assassins’ car was found abandoned later that night on a nearby street. The killers have not been found.

The murder of Stankovic, popularly known as “Sale the Mute,” was just the latest in a string of killings of leading Serbian football hooligans. In a country where sports fandom often meets organized crime, about a dozen prominent figures from the country’s soccer supporters’ groups have been murdered recent years. Most have perished in gangland-style killings apparently tied to crime.

Stankovic, the leader of the “Janicari,” or Janissaries, a supporters’ group for Belgrade team FK Partizan, was in many ways typical of those killed. Media reports have identified Stankovic, who led the Janissaries since 2013, as having been involved in organized criminal activity, including drug trafficking. In 2013, Stankovic was sentenced to five years and 10 months in prison for the illegal possession of firearms and for organizing a criminal group that sold drugs.

Stankovic’s killing has been pinned by the government and media on organized criminals from neighboring Montenegro, who command much of Serbia’s underworld. But despite Stankovic’s background, there is little detail on the motivation behind the killing of a relatively low-level criminal by what the Serbian government has labeled one of the top organized criminal groups in the Balkans. 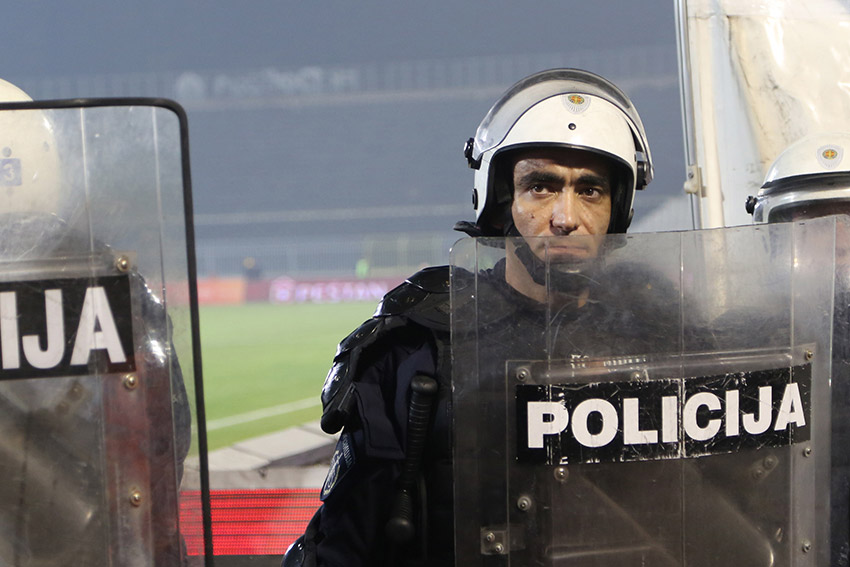 The government of Prime Minister Aleksandar Vucic has condemned Stankovic’s murder. Interior Minister Nebojsa Stefanovic vowed the day after Stankovic’s death that the government would not “allow our country to be used as a training ground for criminal activities.”

But experts and former hooligans say that tough talk hides a deeper truth that helps explain the violence: government complicity. Rather than viewing football hooligans as a threat to law and order, analysts say, government officials and security agencies use these groups of young men as political proxies, imbued with an ethos of Serbian nationalism. In return, they are left on a very long leash to carry out criminal activities.

“The politicians use the hooligan gangs for their own means, and in exchange protect them from getting in trouble,” Dobrivoje “Dan Tana” Tanasijevic, the former president of Belgrade football team Red Star, told OCCRP.

During his own efforts to reduce the influence hooligans had on the sport during the 2008-2009 season, Tanasijevic says members of a Red Star supporters’ group barged into his office, trashed the room and threatened to hurt him.

Serbian police did not respond to multiple requests for comment. 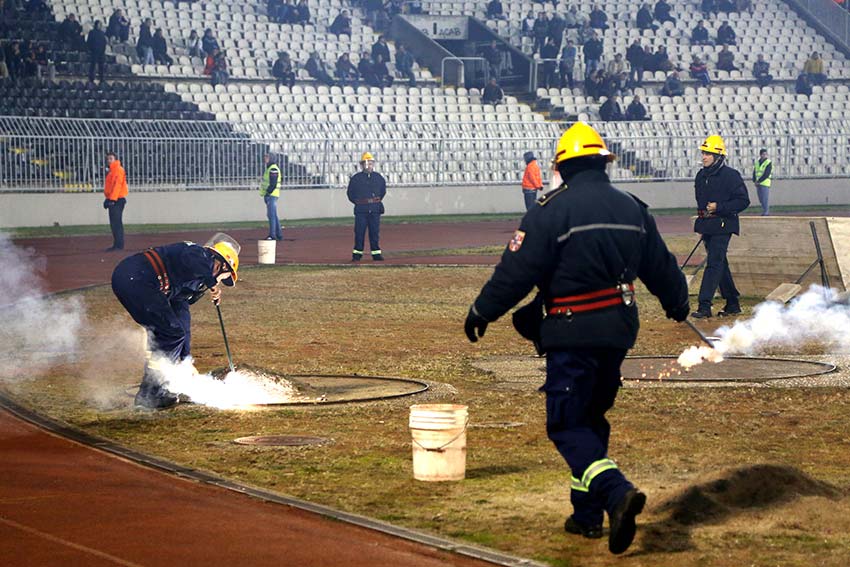 Firemen extinguish flares thrown onto the field by FK Partizan supporters (Photo: Aubrey Belford)
The impunity enjoyed by hooligans stretches back to the early 1990s, during the breakup of Yugoslavia, when football supporters’ groups served as dedicated backers of the Serbian nationalist cause championed by then-President Slobodan Milosevic, said Slobodan Georgijev, a Serbian journalist who has reported extensively on the groups.

Football hooligan groups were a recruiting ground for the ultra-nationalist “Tigers” militia of UN-indicted war criminal Zeljko Raznatovic, widely known as Arkan, the US State Department wrote in a diplomatic cable released by Wikileaks. In the years since, hooligan groups have moved into crimes including “money laundering, protection rackets and drug dealing,” the State Department said.

Hooligans have continued to play a role on the political scene. In 2000, they took part in popular protests that overthrew Milosevic, and in 2008 burned down portions of the US embassy in Belgrade following the country’s recognition of Kosovo.

Analysts say that the government of Prime Minister Vucic, which has run the country since 2014, has also heavily embraced the hooligans. The hooligans are a perfect fit for a government that rules through a combination of nationalism and populism – and which is itself not free of ties to organized crime.

Opposition figures have alleged that Vucic’s government used its influence with hooligan groups to keep them quiet during a 2015 gay pride march in Belgrade, in order to avoid previous violence and thereby boost the image of the government in the eyes of European leaders.

Hooligans who attacked and injured pride marchers during previous parades, however, have gone unprosecuted during Vucic’s rule.

“Formally, the government is ready to implement the law but, when the lights are off, it strengthens the connections with those who are able in short time to organize thousands of young people for different purposes,” Georgijev said.

The government has made halting attempts to crack down on hooligans in the past – sometimes with unintended effects.

In 2009, Serbian authorities arrested a dozen hooligans after a French supporter was killed in a clash between French football fans and FK Partizan supporters. Former hooligan Stefan Velickovic was among those convicted, and served five years in prison on murder charges.

Velickovic, who maintains that he was not involved in the death, said that the government’s crackdown was because some hooligans in the stands had begun to fight not only each other, but with members of the police as well.

“The situation was used by politicians to fight the hooligans,” Velickovic said. “They were showing how strict they were by targeting kids.” 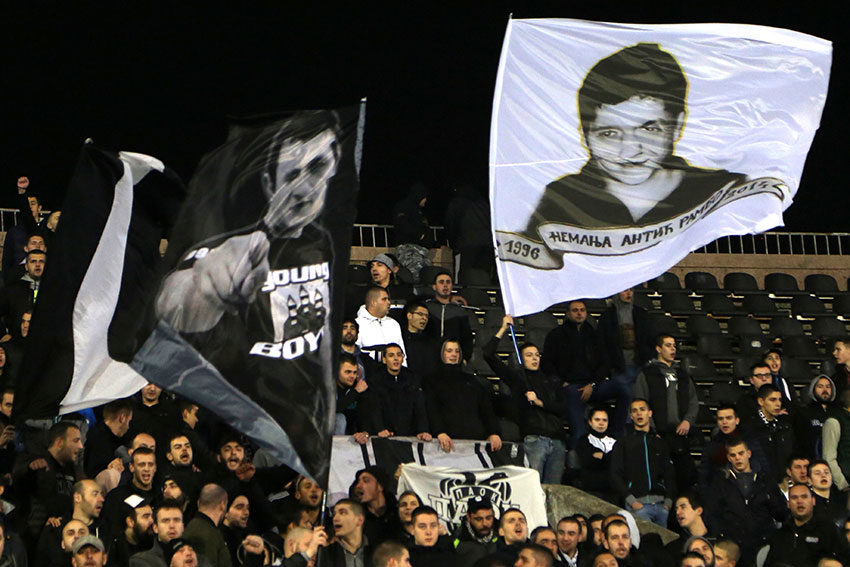 The crackdown led to a vacuum in the Partizan hooligan scene, allowing for the rise of a new group of supporters on the stands: Aleksandar Stankovic’s Janissaries.

Unlike Velickovic’s generation of hooligans, Stankovic’s Janissaries were repeatedly allowed to escape justice. After being convicted in 2013 for drug trafficking, Stankovic managed to successfully postpone his prison sentence at least twelve times before his death, citing health reasons, all the while still actively appearing in the stands.

In April 2016 Stankovic allegedly incited two of his fellow hooligans to beat the bodyguards of FK Partizan head Milos Vazura in front of live security cameras, but was never prosecuted for the attack as he himself was not caught on camera hitting Vazura or his bodyguards.

When questioned, Serbian Prime Minister Vucic defended the decision not to prosecute Stankovic.

“Should our authorities, the police, prosecution and judicial authorities act in accordance with the wishes of journalists?” Vucic asked.

In the year prior to Stankovic’s death, two other top Partizan hooligans were killed under circumstances that pointed to connections with organized crime.

In October 2015, the leader of Partizan fan group “Young Boys”, Aleksandar Joksic, was killed while selling drugs. In August 2016, Alen Kostic, the leader of Partizan fan group “Forbidden,” was shot and killed in the Belgrade neighborhood of Zeleznik. By the time of Kostic’s death, Serbian police had filed at least 15 criminal charges against him, including for theft and assault.

Similar deaths have also affected Partizan’s rival, Red Star. In May 2014, the leader of the Red Star hooligan group “Hyenas” was shot killed while sitting in his parked car as a result of a criminal dispute.

And in September 2015, Red Star hooligan Aleksandar Roganovic was killed in an ambush suspected to be over drugs. A year before his death, Roganovic was arrested for being part of a gang in the city of Novi Sad involved in street violence and shootings.

As long as football hooligans are tolerated as part of Serbia’s political structure, this kind of violence will go on, Georgijev said.

“If you seriously want to deal with hooliganism, you have to deal with Serbian nationalism, and to detach criminals from something that lies in the very foundations of any single nation in the world,” he said.

“Until then, every statement from the police or other government agency is just one more proof that nothing serious is happening.”