A senior police official in the Federation of Bosnia and Herzegovina threatened to rip a journalist’s throat out. Widely hailed as a war hero, Zoran Čegar has spent years in top positions despite repeated scandals, pointing to a pervasive culture of impunity. 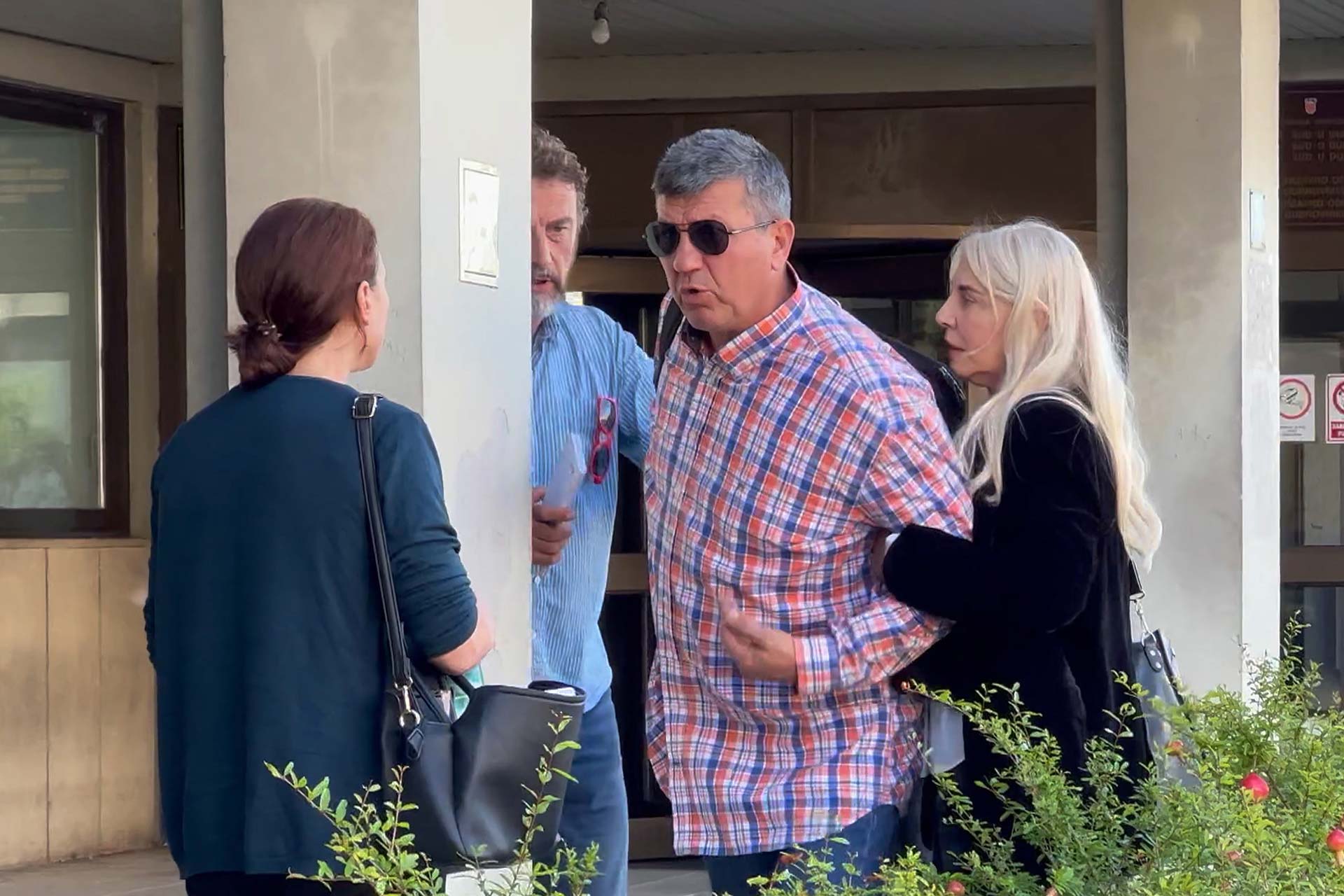 Barely restrained by his own lawyer, Čegar lunges at a CIN journalist outside Dubrovnik’s Municipal Courthouse. (Photo: CIN)

“Do you have any idea who you’re playing with, you fool? Don’t make me rip your throat out!”

October 26 was warm and sunny in Croatia’s dreamy coastal city of Dubrovnik, but the exchange in front of its modernist Municipal Court building quickly turned dark.

Zoran Čegar, a senior police official from neighboring Bosnia and Herzegovina, was on trial that day for allegedly defrauding a local businessman. But when questioned outside the courthouse by two Bosnian reporters, the gravity of the occasion didn’t restrain him from bursting out into a series of crude threats.

“I had no proof…” the journalist replied.

“No proof that I’m a hero?” he shouted, lunging at her. A colleague tried to intervene, but Čegar pressed on, calling her a “motherfucker,” deploying an ethnic slur, and threatening to “rip [her] throat out” again.

The scene would have been shocking no matter who Čegar was. But his violent threats against journalists from Bosnia’s Center for Investigative Reporting (CIN) were all the more disturbing for having come from one of the country’s senior law enforcers.

Top officials have since called for Čegar’s dismissal, and he has been suspended while the police conduct an investigation. But it is unclear whether he will face real consequences. Over the course of his long and controversial police career — buttressed by a reputation as a heroic defender of Sarajevo in the early days of the 1992-1996 war — Čegar has repeatedly been accused of violence, misconduct, and corruption. But investigations never seemed to get far, even after he was filmed repeatedly punching a civilian in a Sarajevo parking lot earlier this year.

Many say Čegar enjoys political protection, though the internal dynamics of the country’s multiple law enforcement bodies are difficult for outsiders to understand. What’s certain is that his continued influence — just three years ago, he was a candidate to head up the Federation of Bosnia and Herzegovina’s entire police force — demonstrates a culture of impunity in Bosnian law enforcement that hasn’t abated with the passing years.

The issue is a pressing one, with the European Union getting closer to approving Bosnia and Herzegovina’s candidacy for membership even as it makes clear that rule-of-law reform is near the top of its wish list.

International attention has recently focused on the country’s Serb-majority region, Republika Srpska, where nationalist leader Milorad Dodik has repeatedly threatened secession, but Čegar’s latest provocation highlights the serious problems that remain in the country’s other major entity, the Federation of Bosnia and Herzegovina. The last comprehensive international effort to reform its law enforcement apparatus ended years ago. 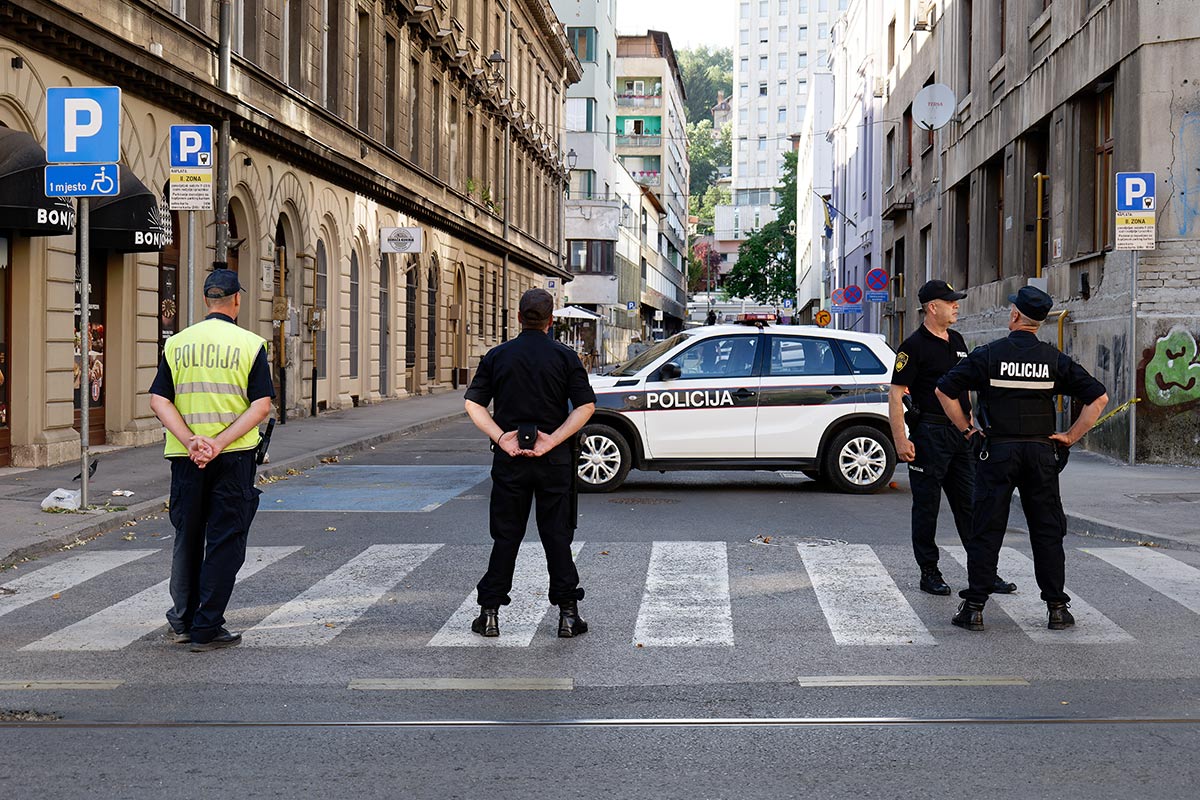 A CIN investigation into Čegar, published days before the courthouse confrontation in Dubrovnik, seems to say it all.

In “The Double Life of Officer Čegar,” journalists used court records and interviews with witnesses to expose how the senior police official had spent years engaging in apparently fraudulent business dealings.

In case after case, former friends or business partners accused Čegar of deceptive practices, including manipulation through misleading contracts and failing to make promised payments. Their stories converge on one common tactic: Instead of paying in cash, Čegar preferred to acquire valuable properties — and in one case, a boat — by offering to exchange them for assets he did not actually own.

Among the men allegedly defrauded by Čegar was Dragan Vikić, his old wartime commander, who claims Čegar gained control over a parcel of land that Vikić paid for. Vikić is a legendary figure who even features in a patriotic rock song, but he was unable to prove his case against Čegar in court.

Another case, involving a villa Čegar allegedly appropriated through a deceptive power-of-attorney document, is still in litigation.

And one alleged victim of the police official didn’t even try the courts. Mehmedalija Žmirić, a businessman from whom Čegar obtained a country estate with an artificial lake, two houses, and a horse stable, left for Germany without reclaiming the real estate he said had been taken from him practically at gunpoint.

“It was an armed purchase,” Žmirić told reporters, explaining that Čegar had implicitly threatened to have him investigated for growing marijuana. He ended up giving up his holdings to Čegar at a rock-bottom price.

Though that case never went to court, CIN journalists found that Čegar used fraudulent documents to secure his title to the property. 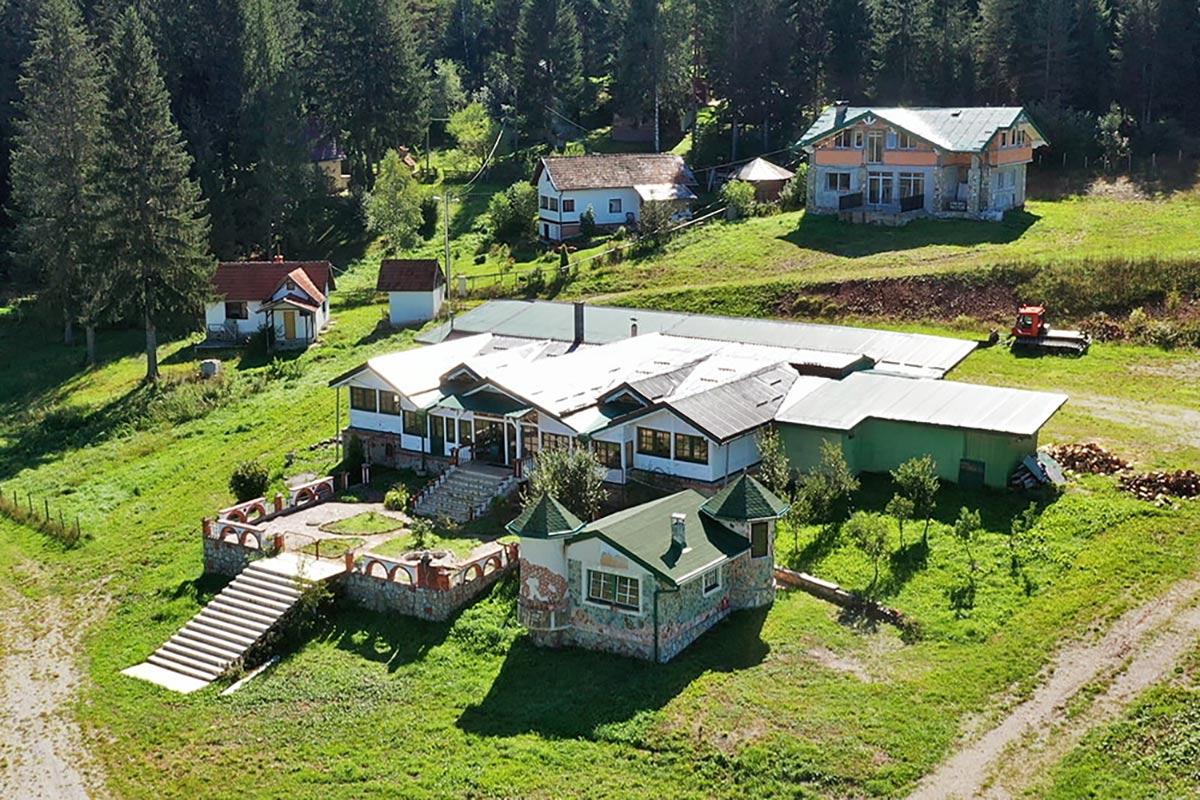 The property Čegar obtained, allegedly by misusing his position, on the Nišići plateau, north of Sarajevo. (Photo: CIN)

When contacted by reporters about these allegations, Čegar hardly bothered to deny them, instead resorting to threats: “I know everything,” he said, adding that “various people” kept him informed about the journalists’ whereabouts.

Although Čegar has never been convicted of any crimes, his ownership of properties across the country — including a luxury villa and a multi-story house in Sarajevo, apartments in other towns, and the countryside estate he allegedly stole — are difficult to explain given his official salary. As he admitted in court, he earns just 3,200 Bosnian convertible marks per month: around $1,600.

“What CIN reported was not common knowledge,” said Aida Čerkez, a longtime local journalist and keen observer of Bosnian cultural and political life. (She is also a news editor for OCCRP.) “It’s not one of those cases where an investigation reports what everyone already knows. This is new stuff and they did a great job.”

For her, Čegar represents a class of men who may have fought bravely in defense of their city, but whose continued presence in the halls of power had become harmful.

“He was someone who Bosnia needed during the war, violent and resolute,” she says. “But very soon he became a menace.”

Jasmin Mujanović, a Bosnian political scientist, views Čegar in similar terms. “He’s part of a generation … of wartime figures who have put themselves on a pedestal that is not appropriate in a democratic society where we’re all supposed to be equal under the law,” he says.

For many members of the broader public, Čegar is still best known for his war record and his decision to stay and defend Sarajevo even though he was not a Bosniak. In a December 2007 interview with a Croatian daily newspaper, he is described as “one of Sarajevo’s war legends” who helped prevent the Serbs from occupying the city in 1992. In one story circulating in Sarajevo, Čegar helped rebuild Bosnia’s police force at the beginning of the war, when it was left devastated by the sudden departure of a large portion of its Serb staff. 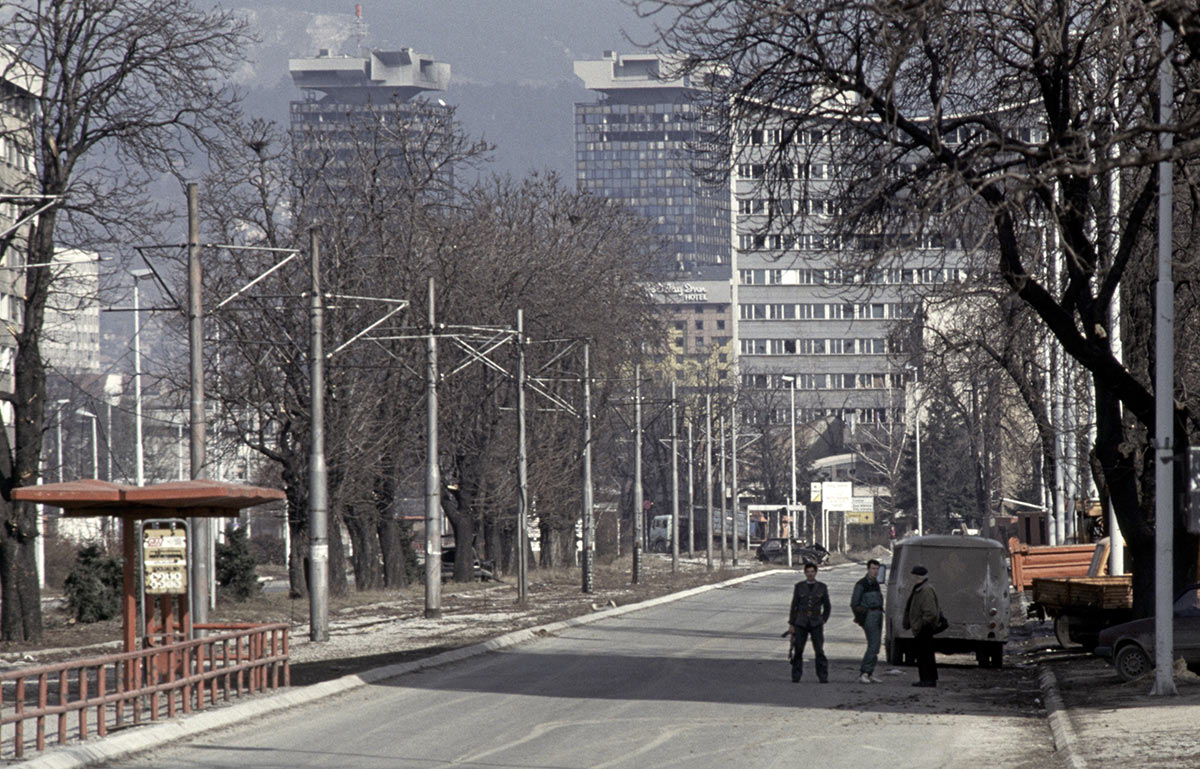 But others question the extent of his role. CIN reported that he left the country soon after the war began, spending many of the ensuing years in Germany and Australia.

A number of observers highlight another side of his reputation, noting an incident when, in retaliation for the arrest of members of his family, he rounded up Serb civilians and had them detained at the city’s Zetra sports hall; only intervention by other officials secured their release.

The controversy didn’t end there.

As early as 2003, shortly after returning from his years abroad, Čegar was at the center of a media storm for “violent and inappropriate behavior” after allegedly barging into a parliamentary meeting.

At around the same time, according to documents obtained by CIN, Čegar’s own police agency investigated him for alleged extortion and blackmail. But he was never charged, and the case was shut down after being interrupted by another scandal.

In 2007, after learning that he held Australian citizenship under the false name Tommy Brown, the police dismissed him for having a double identity. However, he was later reinstated after a court ruled in his favor and eventually reached the higher position he now holds: head of the Uniformed Police Division of the Federation of Bosnia and Herzegovina’s Police Administration.

After the latest scandal this January, which involved Čegar punching a young parking lot attendant, he was publicly denounced by the Federation of Bosnia and Herzegovina’s Interior Minister — but not dismissed. And CIN’s reporting made it clear that Čegar’s superiors did not even know he was facing serious fraud accusations in Croatia, a dismissable offense.

With Bosnia and Herzegovina having held elections in early October, specialists say that Čegar’s fate may be decided during the torturous process of forming a new government.

“He may become an elaborate bargaining chip,” said Mujanović, the political scientist. “But the general phenomenon [he highlights] is that police are insufficiently transparent and accountable,” he added.

This is important not only in terms of Bosnia’s aspirations to join the European Union, but for the well-being of its own citizens: “In terms of security and stability you want to have maximum transparency, maximum civilian oversight, and maximum accountability baked into [law enforcement] organization and operation,” he said.

Čegar’s case shows that there’s a long way to go.

The Center for Investigative Reporting (CIN) is OCCRP's member center in Bosnia and Herzegovina.