The United Nations has paid out tens of millions of dollars to Syrian companies linked to war profiteers, human rights abusers, and sanctioned figures linked to the Bashar Al-Assad regime, a new study shows. 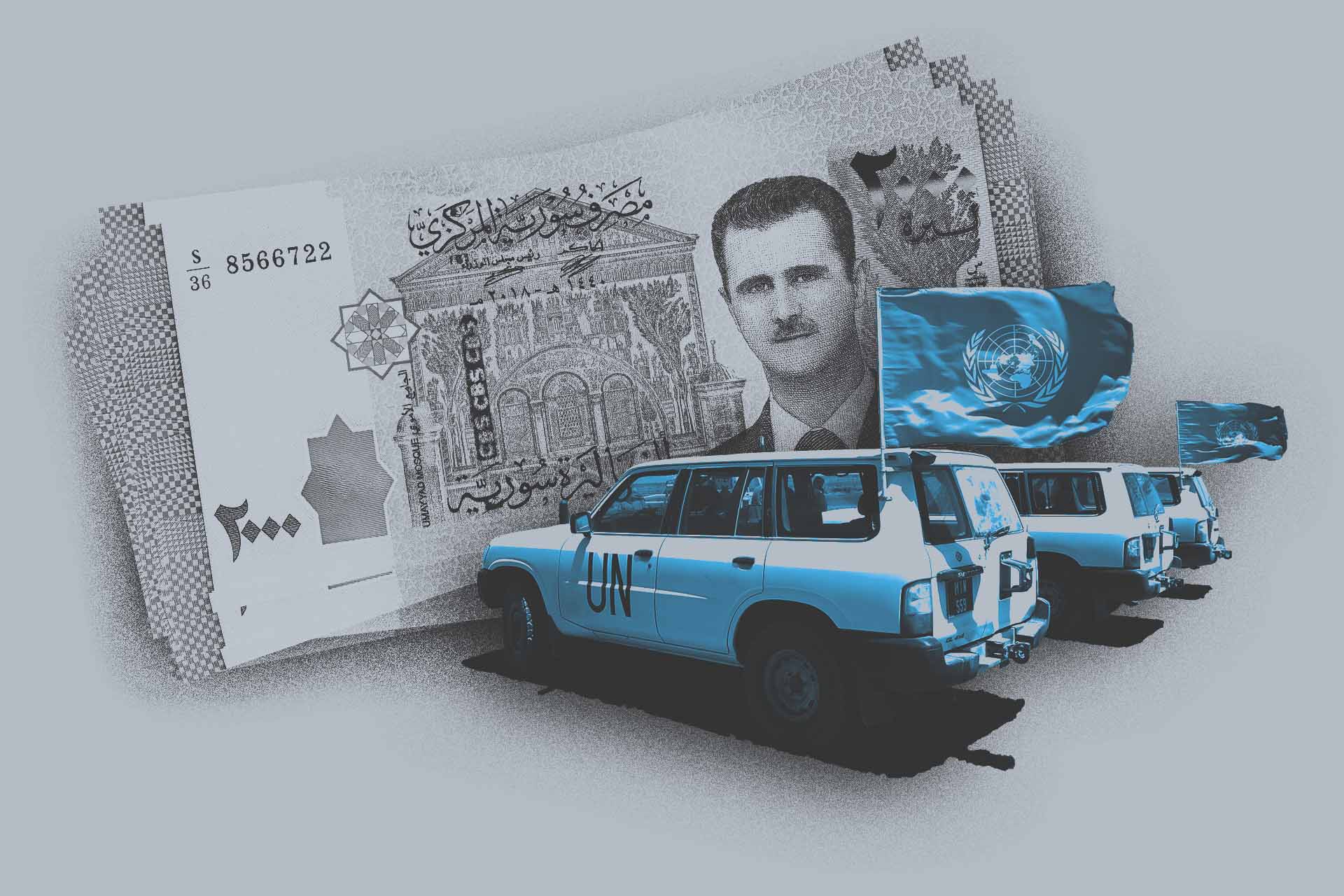 The United Nations paid out roughly $137 million to Syrian companies linked to human rights abusers, war profiteers, sanctioned people, and other figures connected to the Bashar Al-Assad regime in 2019 and 2020, a new study has found.

Among the companies that received U.N. procurement money in Syria was one owned by a sanctioned militia leader linked to a massacre outside Damascus and another owned by the family members of a businessman who allegedly profited from trading the rubble of buildings shelled by government forces, the study said.

“When humanitarian assistance is systematically abused and distorted, under the pretext of protecting the neutrality of humanitarian operations, it may become a dangerous weapon in the hands of the government against its people,” the report’s authors wrote.

The U.N. has long been known to contract companies linked to the Assad regime, which has overseen a decade-long civil war that has killed hundreds of thousands of people and forced around seven million to flee their homes. 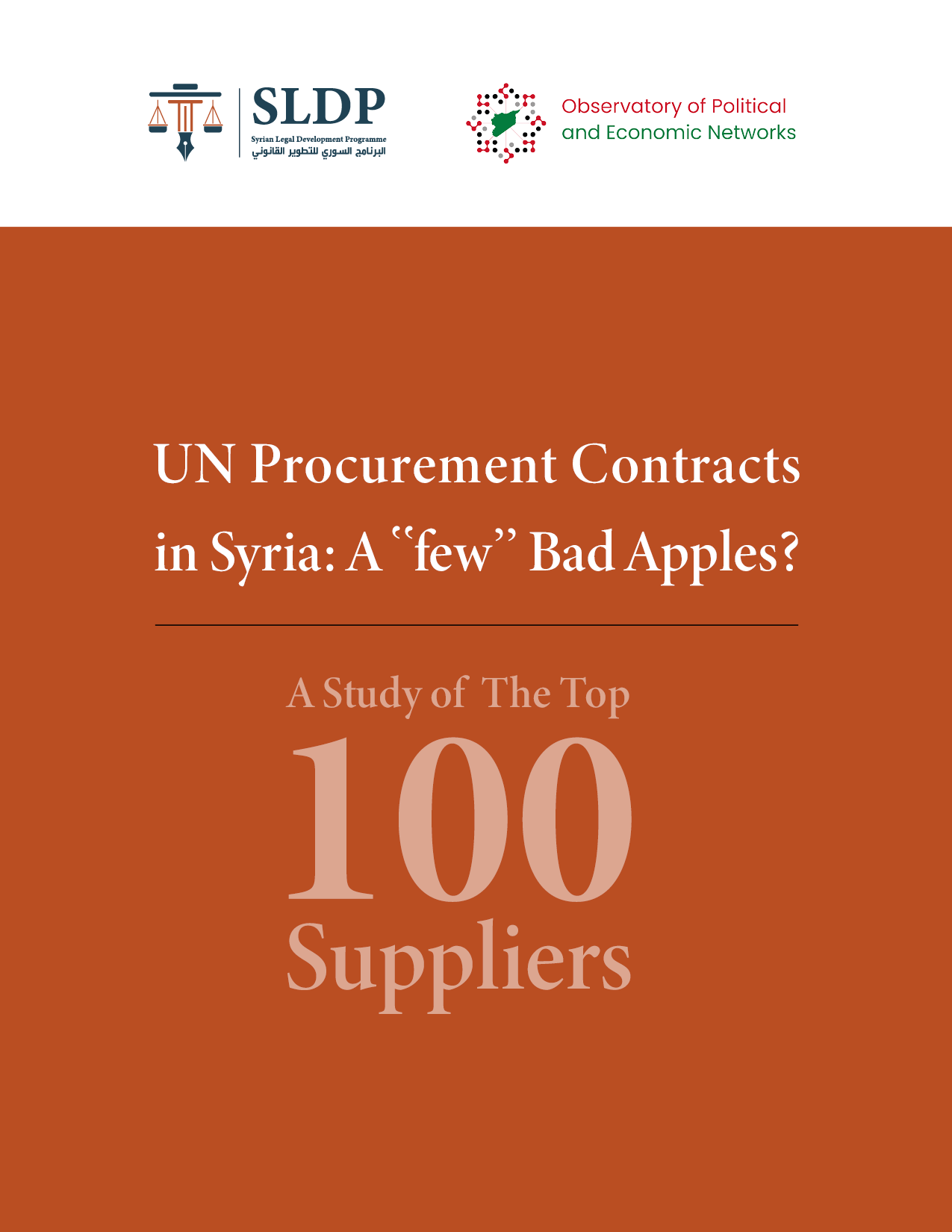 Click here to read the full report.U.N. staff have spent tens of millions of dollars staying at the Damascus Four Seasons hotel, which is partly owned by regime-allied businessman Samer Foz, for instance. The United States sanctioned Foz in 2019, saying he had “leveraged the atrocities of the Syrian conflict into a profit-generating enterprise” and was “directly supporting the murderous Assad regime.”

But the new study — published on Tuesday by the London-based Syrian Legal Development Program (SLDP) and the Observatory of Political and Economic Networks (OPEN) — was the first major attempt to analyze just how much U.N. procurement money is going to human rights abusers or figures who are sanctioned or connected to the Assad regime and the conflict.

In total, the United Nations paid out around $406 million in procurement spending in Syria in 2019 and 2020, covering a wide variety of goods and services such as food, accommodation, medical equipment, security, training, IT services, chemicals, and office materials. About $75 million went to companies which were not identified for “privacy reasons” or “security reasons.”

Of the remaining amount, the report analyzed the money that went to the U.N.’s top 100 known suppliers in Syria — and found that about $137 million went to what the report called “high” or “very high” risk companies, including those owned by war profiteers, sanctioned people, and prominent regime allies.

Reporters from OCCRP and its media partner, Syrian Investigative Reporting For Accountability Journalism (SIRAJ), assisted with research, were granted advance access to the report, and carried out their own analysis of the U.N. procurement database, which corroborated many of the report’s key findings. They also found examples of problematic disbursements before 2019.

In one of the more striking cases, about $1.4 million in UN funding was also provided to the Syria Trust for Development, a foundation established and run by Syria’s First Lady Asma Al-Assad, in 2015 and 2017, ostensibly for emergency shelter and “non-food items,” according to the U.N. Financial Tracker Service.

Carsten Wieland, a German policy adviser and author of a book about humanitarian aid in the Syrian conflict, expressed alarm at the findings.

“It is very appalling that there has not been sufficient due diligence inside the U.N. where these organizations came from, or are a hidden arm of someone else,” he told OCCRP.

Francesco Galtieri, a senior U.N. official based in Damascus, said that the United Nations provided assistance “with strict adherence to humanitarian principles of humanity, neutrality, independence, and impartiality.”

He said that internal due diligence procedures had been strengthened over the past two years and that donor states could ask for details of contracts through a formal audit process. The U.N. also continuously reviews allegations and “disengages” if evidence suggests “the involvement of vendors and suppliers in proscribed practices,” he said.

“All U.N. agencies apply diligent effort to ensuring an in-depth understanding of the breadth of factors relevant to conflict sensitivity and due diligence practices in Syria, to ensure that programming and related operational procedures are risk aware and do no harm,” Galtieri told OCCRP.

The Rise of War Profiteers

Syria’s government has maintained a tight grip over the economy for decades, with allies and relatives of the ruling Assad family dominating key sectors such as telecommunications, infrastructure, and real estate.

Since the 2011 uprising and the ensuing civil war, the Syrian regime has become even more reliant on a new class of war profiteers and proxies to help it skirt sanctions and maintain control over its last few remaining sources of foreign currency.

At the same time, Syria has become one of the world’s largest recipients of humanitarian assistance. Since 2011, over $40 billion of aid money has flowed into the country, more than half of that through the U.N., according to researchers.

The SLDP and OPEN study shows that many in the regime’s inner circle have benefited from this influx of cash.

For instance, a company called Desert Falcon LLC, run by pro-regime commander Fadi Ahmad, received over $1 million in 2019 and 2020 from the U.N. children’s agency UNICEF and its refugee agency for Palestinians, UNRWA, under a variety of categories including “apparel,” “office equipment,” “electronics,” and “manufacturing components.”

In 2012, Ahmad, also known as Fadi Saqr, took command of the pro-government National Defense Forces militia in Damascus. The following year, the militia took part in a massacre of dozens of people in the Syrian capital’s Tadamon district.

Desert Falcon’s co-owner is Bilal Al-Naal, who has been a member of Syrian parliament since 2020. Another company owned by Naal, Al-Naal LLC, received over $1.2 million in funds, also from UNICEF and UNRWA, listed under categories including “apparel,” “paper materials,” and “medical equipment,” the study found.

Another company, Jupiter for Investments SA, which received over half a million dollars from UNICEF for “management and admin services,” is owned by relatives of regime ally Mohammad Hamsho, including four who are under sanctions. Hamsho, who is also sanctioned by the United States and the European Union, has been accused of trading in the rubble from destroyed homes and acting as a front for Assad’s brother, Maher, who heads the army’s elite Fourth Armored Division.

Cham Wings, a Syrian airline sanctioned by the United States, received over half a million dollars from the World Food Program, the study said. The airline was also sanctioned along with its owner and chairman by the European Union for exacerbating the refugee crisis on the borders of Belarus in 2021 and 2022, but the sanctions were lifted earlier this year. 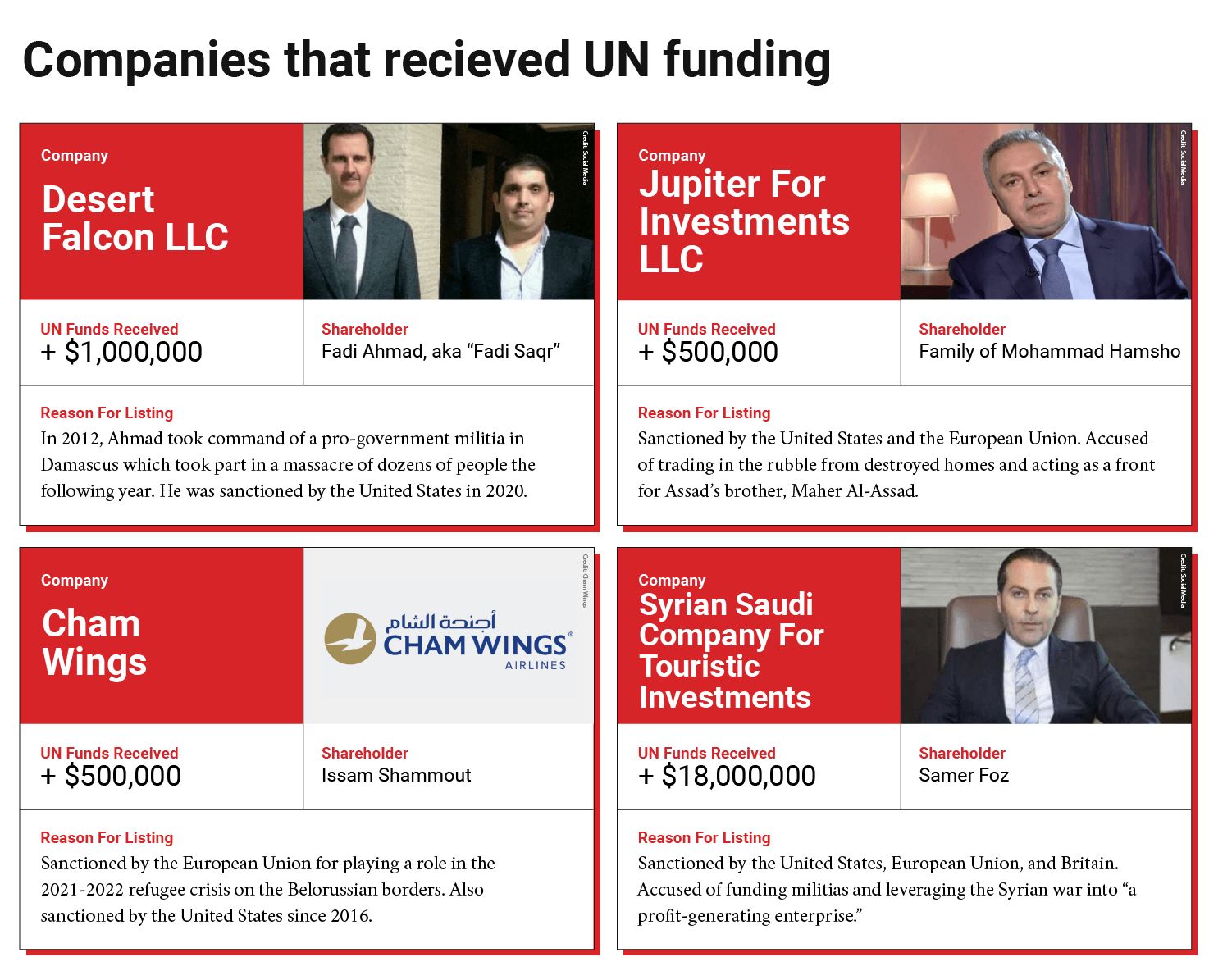 A variety of other companies receiving U.N. funds were linked to the Assad family, including multiple relatives and partners of Assad’s cousin, the sanctioned business tycoon Rami Makhlouf. Many of Makhlouf’s assets were stripped and he was put under house arrest in a conflict with Syrian authorities over the past two years.

Earlier this month, the Associated Press separately reported that staff members at the U.N.’s World Health Organization in Syria had accused their boss of mismanaging millions of dollars and using the agency’s funds to buy gifts for Syrian government officials.

The influx of foreign currency brought by humanitarian aid spending is a boon for the Syrian government, which has struggled to procure cash amid international sanctions, the collapse of its most productive economic sectors, and a financial crisis in neighboring Lebanon.

U.N. agencies that spend money in Syria are required by the government to exchange currency at the official exchange rate, which is far below the black market rates. Karam Shaar, the co-author of the report, said that in his research he found the U.N. exchanged some $340 million at the official rate in 2020, which was on average 50 percent lower than the black market rate that year.

The differential resulted in $170 million of “diverted” donor money, although it is not exactly clear how or where the government diverted these amounts, he said.

The SLDP and OPEN study analyzed about $294 million in procurement funding, representing the amount that went to the U.N.’s top 100 suppliers in Syria in 2019 and 2020, and including companies that are fully private or those with both public and private shareholders.

Drawing on business directories which rely on the official Syrian gazette, as well as news websites and social media, they divided the suppliers into four levels of risk, based on a guide written by SLDP and Human Rights Watch. 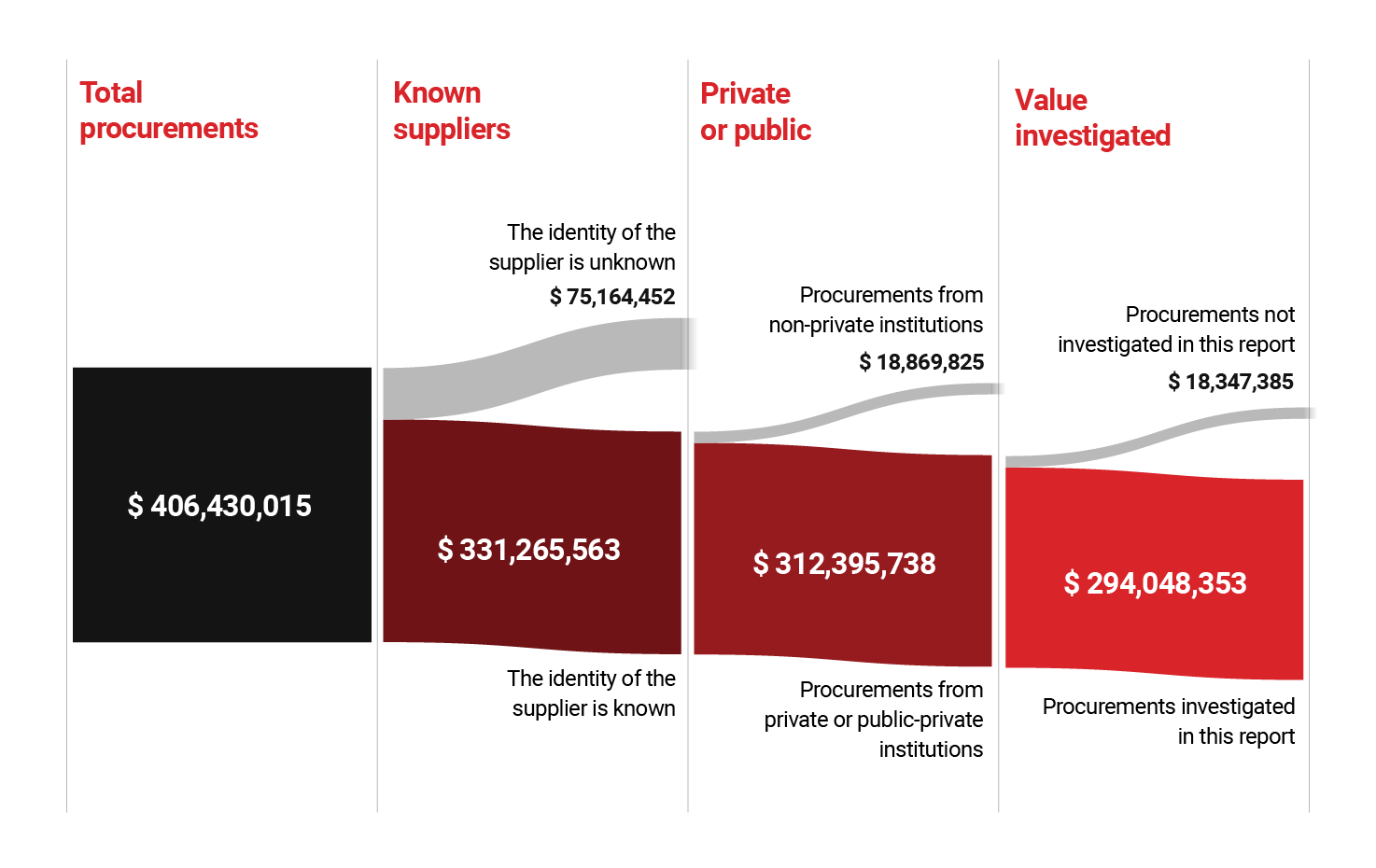 “Very high risk” companies included companies with links to human rights abuses, paramilitary groups, the private security industry, the destruction of civilian property, the development of land where people were forcibly displaced, and support for the Syrian armed forces and government since 2011.

“High risk” included companies which have received Syrian state contracts or held monopolies over certain sectors, were owned by members of parliament or other local officials, had donated to Syrian entities, or taken part in economic blockades of opposition-held areas. 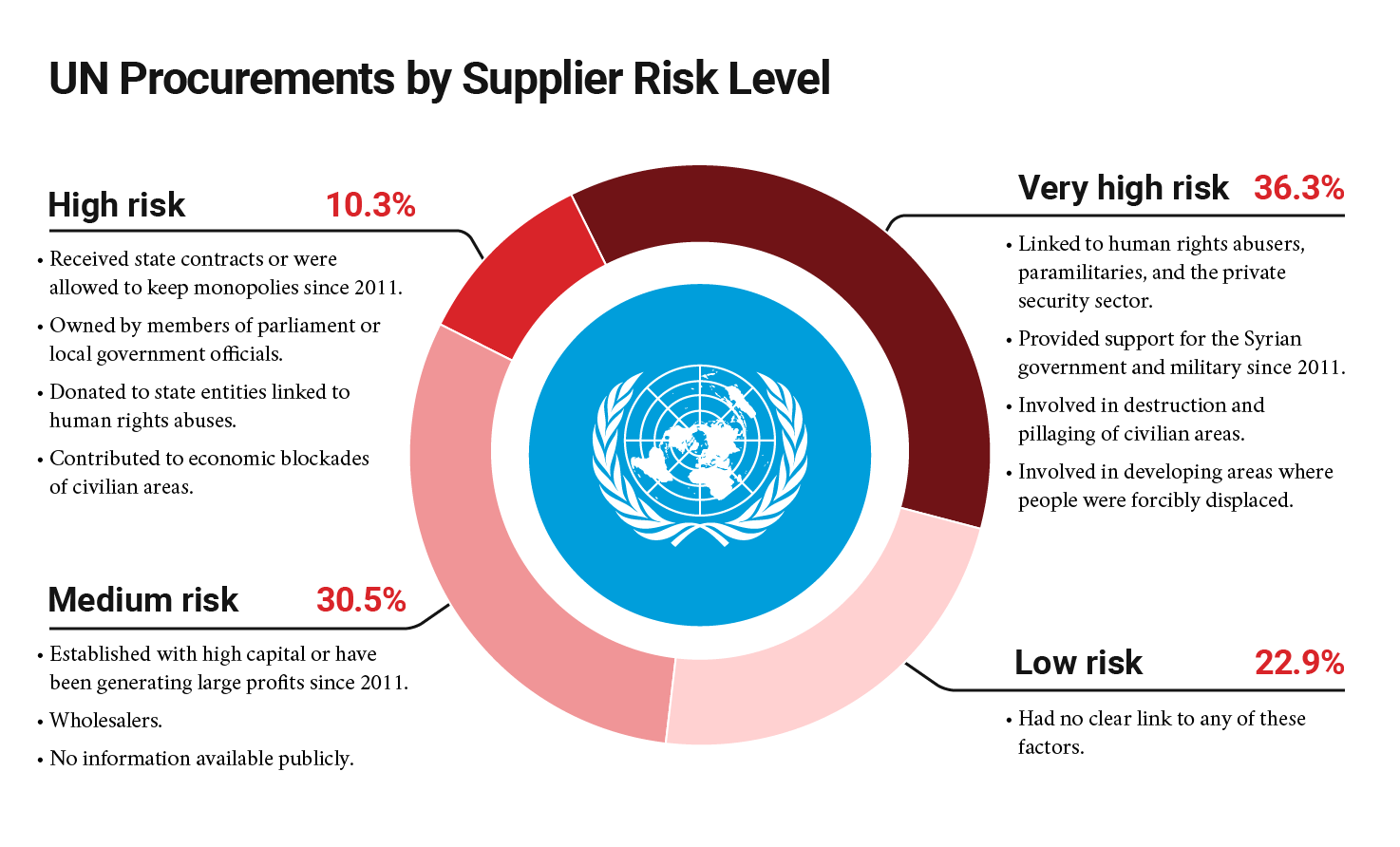 Wieland, the policy adviser, said that thorough reform would be needed to get out of the “neutrality trap” and make sure that U.N. money was not going to suppliers like those listed in the report.

“It is something so tricky, and so politically relevant, that it has to come from somebody so far up,” he told OCCRP. “This has not been done. I have not seen any real will to tackle such issues.”