For eight years, Chinese property developer Chen Runkai used hundreds of wire transfers to move tens of millions of dollars into accounts at Canadian banks –– a technique experts say is a hallmark of money laundering. 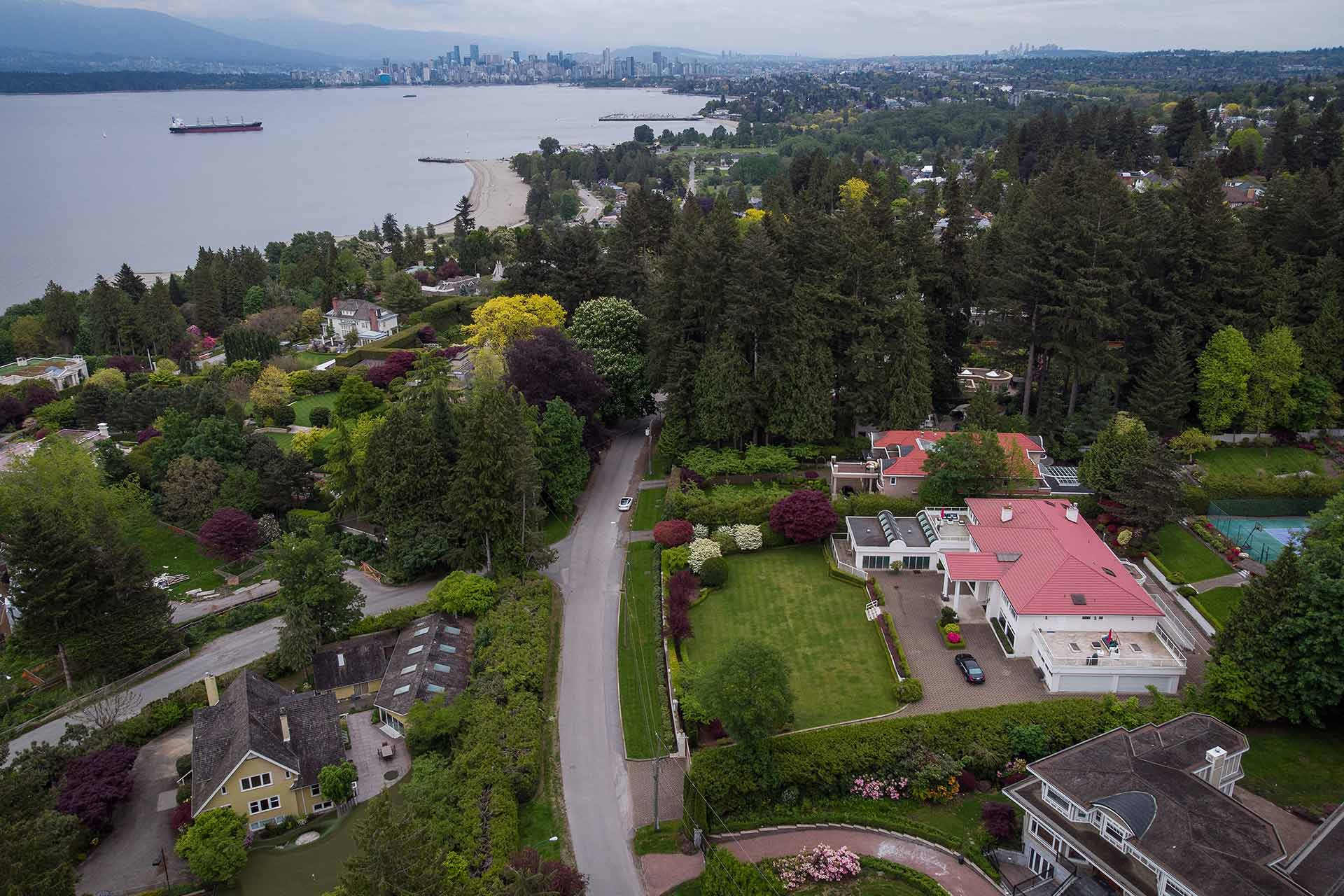 Chen and his daughter both own mansions on this street in Vancouver’s Point Grey neighborhood. (Photo: Darryl Dyck for the Toronto Star/OCCRP)

Yet Canada's biggest banks –– including the Royal Bank of Canada, CIBC, TD and the Bank of Montreal –– all accepted the money without flagging it to the country’s financial regulator.

Only one financial institution acted: The Vancouver arm of Switzerland's UBS bank filed a suspicious activity report in 2012 after noting massive flows of unexplained money into a Chen family account.

"All kinds of alarm bells should have gone off,” said Garry Clement, a former Royal Canadian Mounted Police superintendent focused on proceeds of crime.

"It almost gives the impression they're asleep at the switch… It just shows that the system is broken," added Clement, who is now chief of anti-money laundering for VersaBank.

At a time when governments are wrestling with the impacts of illicit foreign funds entering overheated real estate markets in Vancouver and Toronto, the unquestioned flow of Chen's money has raised concerns about the due diligence and rigor employed by Canadian banks when it comes to anti-money laundering detection and reporting.

The Toronto Star and OCCRP reached out to banks that received Chen’s funds and asked why the money flows did not trigger concerns or formal reports to authorities. The banks each said they could not comment on individual customers. They added that they take their anti-money laundering obligations seriously, have implemented controls, and comply with all regulations.

The story of Chen –– how he moved to Canada from China in 2006 with modest means, then accumulated tens of millions of dollars and luxury homes in Vancouver, while facing charges in his home country for alleged bribery –– was detailed in a recent investigation.

The mysterious source of Chen's conspicuous wealth, and its movement to Vancouver where he now lives with his family, has been the subject of an investigation by Canada's financial intelligence unit, as well as a probe by a British Columbia commission studying the impact of money laundering in that province.

In 2012, the year Chen's financial transactions were first flagged by UBS, his daughter bought a mansion with a tennis court and swimming pool near the beach in Vancouver for 14.7 million Canadian dollars. She paid for it without a mortgage, while listing her occupation as "student." Chen bought a CA$15.6 million mansion on the same street in 2016.

"He was successful in obtaining and making a lot of money in real estate development in China without being involved in corruption," said Lorne Waldman, a Toronto immigration lawyer representing Chen. "He didn't do anything wrong."

A Flurry of Transactions

UBS closed Chen's account in 2012 due to a lack of explanation about the source of the funds, according to a report the bank filed to the Financial Transactions and Reports Analysis Centre (Fintrac), Canada's financial intelligence unit.

The high volume of transactions in a short time was a sign of a money laundering technique called "layering," in which "complex layers of financial transactions are used to obscure the source of the ownership of funds," reads a UBS suspicious transaction report.

But Chen had little trouble finding major Canadian banks to receive millions from China using the same methods, the documents show. None of them flagged the transactions to Fintrac.

In August 2020, British Columbia’s Cullen Commission issued summons to 11 financial institutions in Vancouver asking for information on any transfers made to Chen and his family members from overseas accounts since 2009. Responses from major banks revealed transfers totaling nearly CA$170 million over eight years. The sources of the transactions were three Hong Kong currency exchange companies, and one individual.

The Bank of Montreal received CA$83.7 million between 2009 and 2016, the records show. In 2013 alone, CA$52.2 million arrived in a Chen family account through 101 transactions. The following year, another CA$28.4 million moved to the accounts in another 59 transactions.

TD told the Cullen Commission it received CA$16.4 million to Chen family accounts via 43 transfers between 2011 and 2014. "We continue to believe that we complied with our regulatory obligations at the time," a spokesperson told the Star and OCCRP.

Experts say Canadian banks have moved more slowly on fighting money laundering than many of their international counterparts.

"Unfortunately, these issues weren't taken seriously enough for such a long time in Canada," said James Cohen, executive director of the national chapter of the advocacy group Transparency International.

"Canada was just lagging for so long on the issues...It's tough to say if it is better (today). There's definitely more public attention. So one would hope that the banks are stepping up efforts."

Although the banks that received funds for Chen told reporters they had strong anti-money laundering controls, Clement, who reviewed the Cullen Commission documents, questions how they could have let so many suspicious payments through their systems.

"Our banks, although they've spent, I would say multi-millions of dollars on systems, they're still falling down in a number of areas," said Clement. "In a case like this, you have to ask, how could...you overlook filing a suspicious transaction report?"

"You have to ask yourself, is it a case of greed trumping ethics?"

The suspicious account closed by UBS in 2012 nominally belonged to Chen's mother, for whom he held power of attorney. A UBS client adviser initially questioned Chen's mother about the source of the funds, according to the Fintrac report. She said they were the proceeds of a land deal in China, but could provide no further details.

The UBS adviser later questioned Chen, who was the "ordering client on electronic funds transfers" on the account, the documents show. He was "unwilling to provide any satisfactory documentation confirming legal title over the land...or in relation to any land sale transaction."

Mary-Jane Bennett, a Vancouver-based former criminal lawyer recently commissioned by Toronto's Massey College to investigate and write a report on money laundering, says Canada is well behind countries like the U.S. and U.K. in detecting and reporting suspicious financial activity.

"I found it interesting that the one bank that did question this money is that Swiss bank," she said. "They probably had a much lengthier, detailed history with money laundering than we have here in Canada."

Cohen, of Transparency International, says there has to be accountability –– not just for the alleged money launderers, but for the system that allows them to flourish in Canada.

"Our law enforcement and prosecutorial services on the financial crime front have been really understaffed and under-resourced for ages." 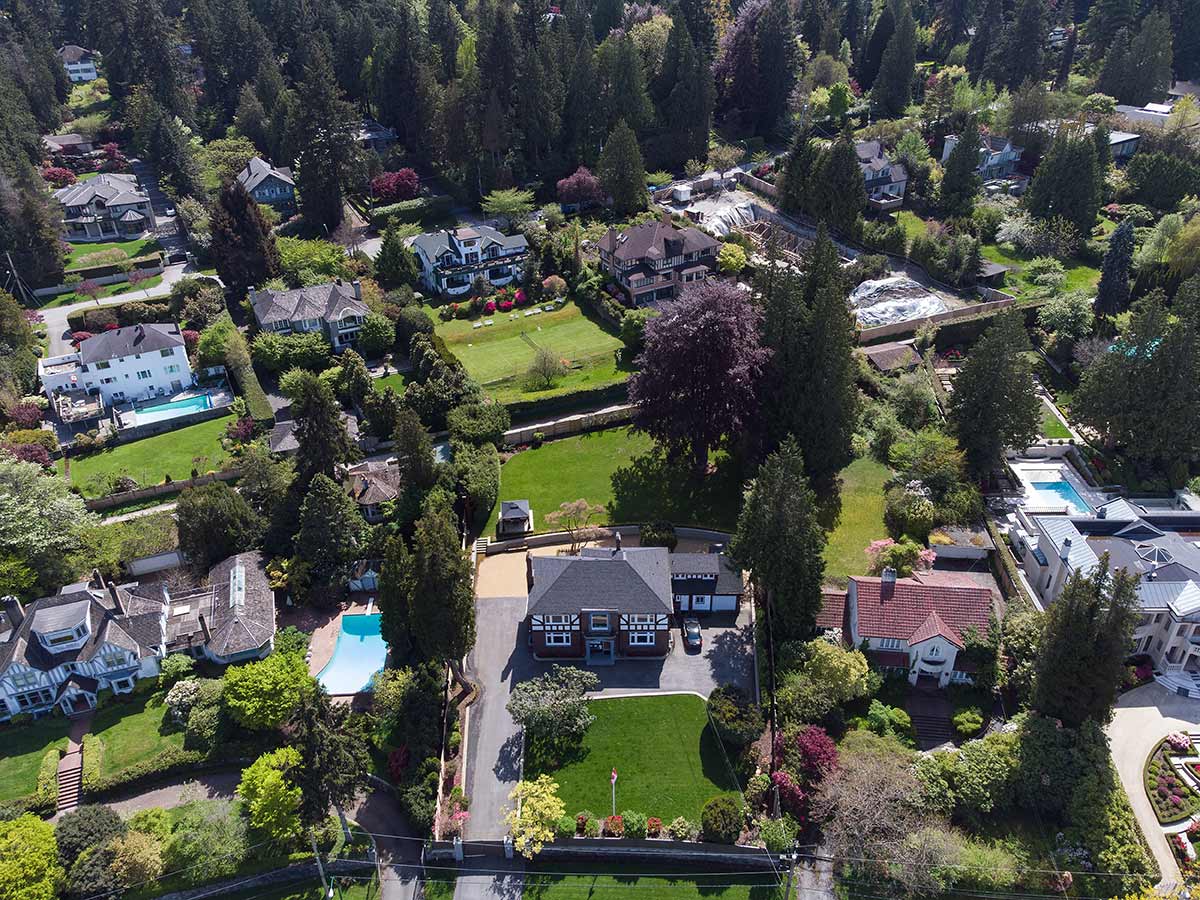 Had Canadian banks probed the sources of funds coming into Chen family accounts, they might have discovered what Cullen Commission researchers found: Most of Chen's money moved through offshore entities connected to a Hong Kong family with links to organized crime.

Members of the Fang family run a network of companies, jewelry shops, and currency exchanges in Hong Kong and Macau, according to a case study that was one of more than 1,000 exhibits of evidence to the Cullen Commission. 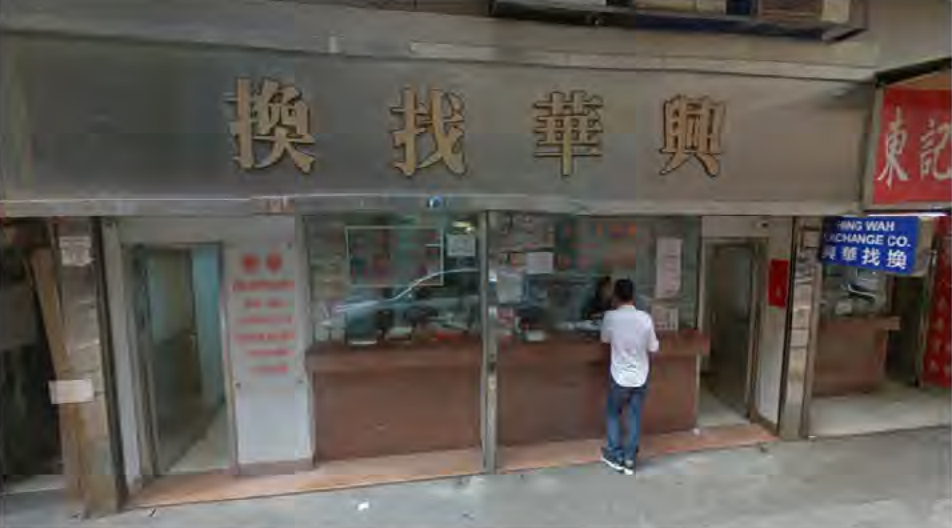 The Hing Wah Currency Exchange in Hong Kong is owned by a firm that transferred funds to Chen. (Photo: Cullen Commission)

Two firms in which Fang was a director transferred millions of dollars to Chen accounts in Canada. The case study says the Fangs "are connected to a large number of companies in Hong Kong," which publicly list "little or no information about their operations."

That's a "really, really common" set-up for illegally moving money out of China, said Christine Duhaime, a financial crime expert who noted that the government limits individuals to transferring US$50,000 overseas per year, but allows companies to send larger amounts.

To get around these restrictions, scores of private firms will be set up with banking access in both Hong Kong and mainland China so that personal funds can be sent in the guise of a business transaction.

“It looks like they’ll be doing a normal commercial transaction with a private company, when in fact all it is is an underground banking transaction,” said Duhaime. “The company’s services really are about taking the money out of China for a fee of 5 to 20 percent.”

The model is also commonly used in so-called “gambling junkets,” she said: underground networks that bring mainland Chinese gamblers to Macau or Hong Kong and give them cash to gamble with. By the time they leave the casinos, gamblers are often heavily indebted to organized crime figures.

One Fang family member, who transliterates his name into English as Fong Siu Lok, has links to gambling and organized crime figures through a Macau jewelry shop he runs, according to Cullen Commission research.

The store, Christine Jewelry, shares the same corporate secretary as a gambling junket run by Lin Szeto Yuk, who also goes by the English name "Christine." She is a "gaming tycoon sometimes referred to as the 'big sister' of Macao's gambling world," reads the case study.

Lin is widely reported to have a close relationship with Wan Kwok-koi, or Broken Tooth Koi, an infamous leader of Macau's 14K triad, who is wanted in Malaysia and reportedly in hiding. The U.S. Treasury Department sanctioned Wan in 2020, citing alleged involvement in criminal scams, including corruption and bribery.

Chen's lawyer, Waldman, said his client had no knowledge of the Fang family's alleged connections to organized crime. He added that strict limits on moving money out of China force people to make transactions that look suspicious, but really aren't.

"There are often reasonable explanations, especially when you're dealing with countries like China, where there's restrictions on transfer of foreign currency, as to why people transfer money in the way they do," said Waldman.