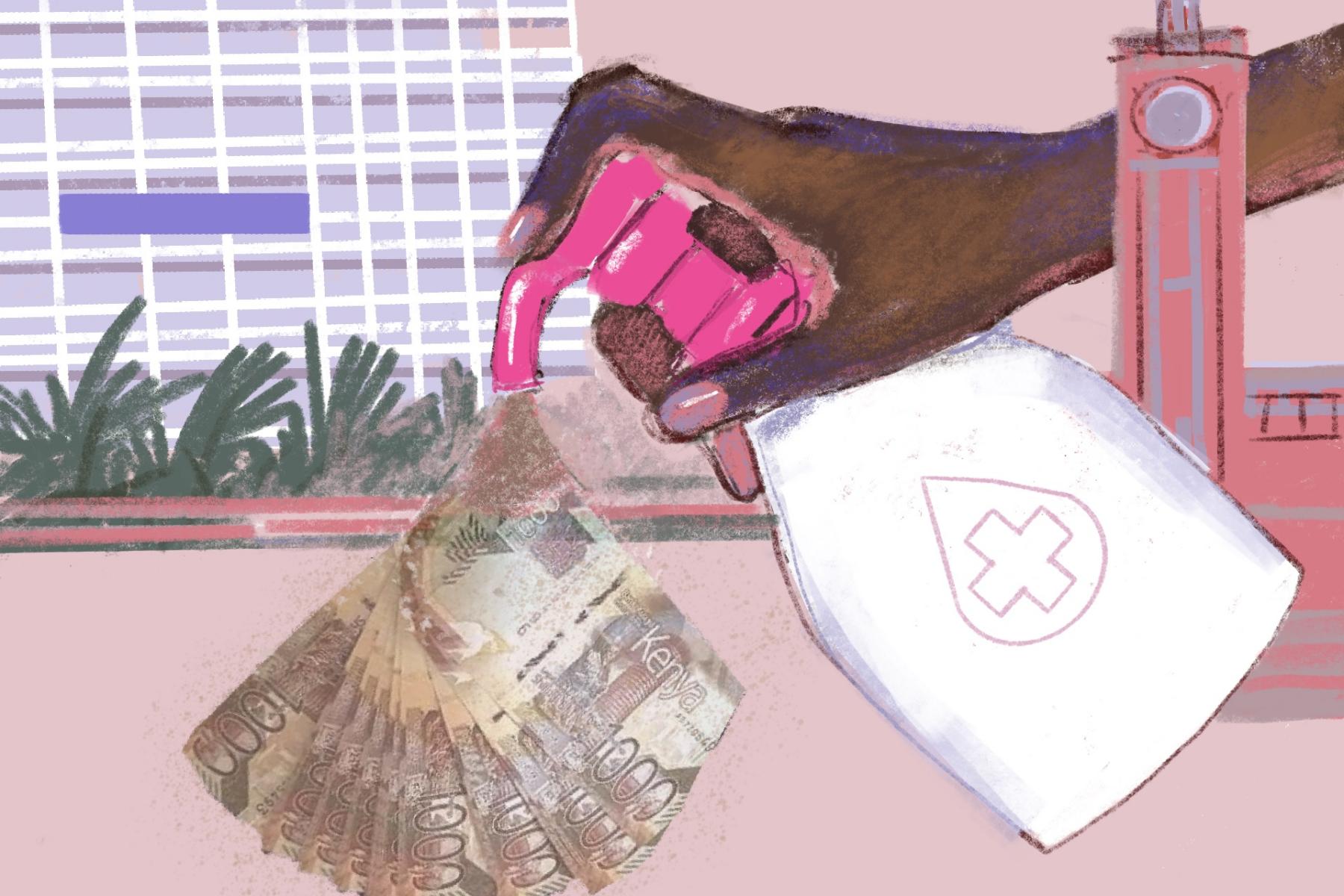 In June, Kenya’s President Uhuru Kenyatta announced a lofty goal: vaccinating the entire adult population of 27 million against COVID-19 by the end of the year. But a long-time problem –– the lack of functioning medical facilities throughout the country –– left many skeptical.

The lack of clinics is not for want of spending.

In 2016, Kenya’s Ministry of Health paid over US$10 million to private companies to deliver and install shipping containers repurposed as portable clinics, to improve healthcare access for marginalised populations in the urban centers of Nairobi, Mombasa, and Kisumu. For the next four years, the 100 containers sat near the Mombasa port while government agencies investigated how an obscure Kenyan company won a hyper-inflated contract to supply them.

Some time last year, the container clinics were moved from their storage place. Yet journalists could only locate a handful of them, and not one is operational.

Kenyans are used to seeing procurement scandals in the news, stories about billions in public funds paid to ghost companies for goods and services that never materialize. But they rarely learn who is behind the schemes, or why they’re so common.

When OCCRP member center Africa Uncensored acquired a leak of 25,727 public procurement records that spanned nearly four years and eight government agencies, reporters set about digging through the data. They identified companies linked to public officials, while seeking to understand the systemic loopholes that enable endemic fraud and embezzlement in Kenya.

Procurement contracts are now “commonly referred to in Kenya as ‘budgeted corruption,’” according to John Githongo, an anti-corruption activist and whistleblower, who added that there have been no consequences for the political elite involved in the plunder.

“Unfortunately it has been a defining characteristic of the Jubilee (Party) regime, and very sadly the health sector has been predated upon more than others,” he said.

The Jubilee Party did not respond to a request for comment on this story in time for publication. 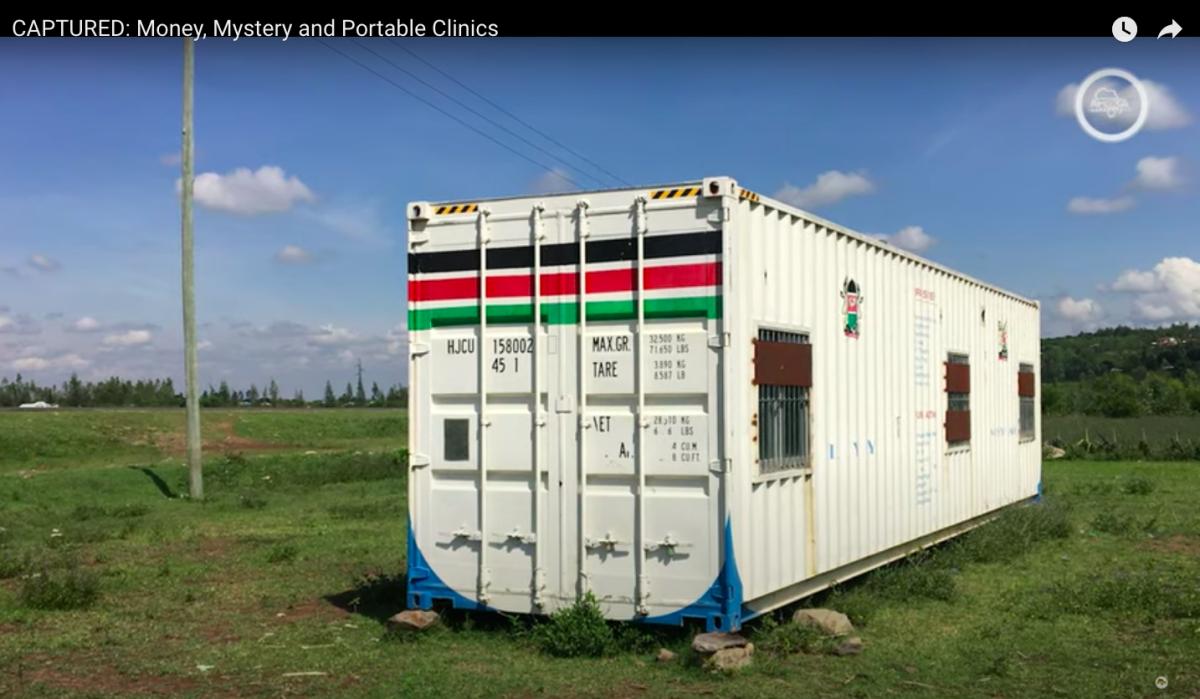 Reporters located one of the mobile container clinics purchased by the Ministry of Health. Credit: Africa Uncensored

While Kenya’s Ethics and Anti-Corruption Commission has been pursuing the case of the hyper-inflated, non-operational portable clinics for five years now, police have made no arrests and no one in power has been officially implicated in the $10 million scheme.

“It is totally out of the question that they would get the contract without the involvement or assistance of a public official. It just doesn’t work like that in Kenya,” said Githongo, who blew the whistle on another public procurement embezzlement scheme in 2002, which is still under investigation.

In the leaked data, reporters found previously undisclosed business links between the obscure company that supplied the clinics, Estama Investment Limited, and public officials, including a charity headed by Kenyan First Lady Margaret Kenyatta called Beyond Zero. They also discovered two former members of parliament in the company network, and a current lawmaker who is under investigation for money laundering in a separate embezzlement scheme.

The director of Estama and Beyond Zero both declined to comment on the investigation. The Ministry of Health did not respond to questions.

This isn’t the only suspect procurement process exposed in the leak.

An earlier investigation revealed that board members of a government corporation were awarded tenders worth millions of Kenyan shillings related to the construction of two dams, intended for one of Kenya’s most water-stressed regions. Reporters showed that their companies continued to benefit even after being outed by Kenya’s Department of Criminal Investigations.

In another, reporters identified two obscure companies belonging to a niece of a powerful MP, Rachael Nyamai, who had oversight of the health ministry’s spending at the time the contracts were awarded. The companies, which had no history of delivering medical supplies, appear to have been paid $240,000 to do just that. One of the companies, Tira Southshore, was also awarded a mysterious $43 million agreement to supply hand sanitizer, according to the government’s procurement system. Reporters were unable to confirm whether the money had been paid, and Nyamai declined to answer questions.

A separate investigation showed numerous contracts belonging to companies owned by Frank Mithika Linturi, a controversial senator from Kenya’s Meru County (more on this below).

Kenya’s legal anti-corruption framework doesn’t ban public officials from doing business, and has very broad standards for what could be considered conflict of interest when it comes to public tenders. For example, a public official can hold shares in a company that wins a government contract, but cannot have a controlling interest.

“They played around with the law quite interestingly,” said Harriet Wachira, a program coordinator at Transparency International-Kenya, referring to the loopholes enshrined in the 2013 Leadership and Integrity Act.

There are several efforts now underway that would strengthen the legal framework around conflict of interest and other corrupt practices. Last year, Kenyan authorities started collecting beneficial ownership information, which will be accessible to law enforcement agencies. Senator Farhiya Ali Haji recently introduced lifestyle audit legislation that would target unexplained wealth. And the Attorney General’s office is actively reviewing a draft bill that would significantly strengthen conflict of interest standards, according to a 2019 version seen by Transparency International-Kenya.

“If all these laws come together the anti-corruption landscape would change completely,” said Wachira. “It would make very serious strides in sealing the loopholes.”

A peculiar phenomenon of Kenya’s procurement system is the awarding of contracts to companies that don’t produce the goods they promise to deliver, and have no track record of providing the services required. Inexplicably, they are paid by government agencies to procure goods and services from other companies.

This was the case with Estama, which purchased the shipping containers from a Chinese company, as well as the two companies owned by Nyamai’s niece, neither of which produce the medical supplies they were paid for.

It was also a red flag in the controversial $630 million Managed Equipment Service government project that was meant to get much-needed medical equipment to Kenya’s 47 counties. Using the leaked data, Africa Uncensored revealed that the government paid obscure Kenyan companies to procure the medical equipment from foreign suppliers.

Linturi, the controversial senator, is linked to at least 14 companies, whose services range from insurance to pharmaceuticals to furniture supply. One of his companies, Atticon Limited, which started as a construction firm, was awarded a $1.1 million contract by the Office of the Deputy President in 2016 to supply honorary medals.

Former employees told reporters that the senator’s company received the inflated contract and then procured the medals from Dubai. They also said the senator employed fraudulent tactics to win the tender, using multiple companies he owned to bid against each other, creating an illusion of competition.

Linturi, who did not respond to questions from reporters, was briefly detained, reportedly on fraud charges, three weeks after the Africa Uncensored investigation was published.

The issue of middleman companies winning public tenders “for things that they’re not remotely qualified for, or have the capacity to supply” is “something that we have seen over and over again,” said TI-Kenya’s Wachira, citing various procurement scandals, including recent headline-grabbing stories about COVID-19 supplies fraud.

Current regulations require the awarding agency to do due diligence on the companies bidding for tenders, but there is no independent oversight or enforcement, according to Wachira.

In the case of the honorary medals, Linturi used multiple companies to bid on a tender from an office where his romantic partner was the chief of staff. Mariane Kittany told reporters that it’s possible he used their relationship to influence the tender.

“If you really want to award the work to a friend of yours there is no law that they can come after you with, to say that this person has no capacity,” said Wachira. “Legally there is no penalty for not conducting due diligence.”

The majority of questionable contracts reporters identified in the leaked data were so-called “blanket purchase agreements,” which are typically reserved for trusted vendors who provide recurring supplies such as newspapers and tea, or services such as office cleaning.

But blanket purchase agreements in Kenya appear to provide fast and vague transactions, with minimal scrutiny.

“A blanket agreement is something which should be exceptional, in my view,” said Kenya’s former Auditor-General, Edward Ouko.

The leaked data lists more than 2,000 such agreements, however, committing about $1.7 billion to non-competed, single-supplier contracts in the span of 42 months. Among these were the contracts awarded to Nyamai’s niece, and the inflated contract to Estama for portable clinics.

“Procurement laws require that BPAs [blanket purchase agreements] be used in very selective circumstances,” said Kwame Owino, a Kenyan policy expert. “These contracts are kept out of the public space so we can't see whether the price is reasonable.”

Leaked data analysis indicates that the Ministry of Health has issued more blanket purchase agreements during public health emergencies, such as the Ebola outbreak in 2015.

An audit of contracts awarded during the 2020 COVID-19 pandemic also concluded that the Kenyan Health Ministry’s procurement agency engaged in multiple irregular procurement methods, including issuing retrospective single-source contracts, and choosing companies with no history or qualifications.

In July, Kenya’s Auditor General Nancy Gathungu and Controller of Budget Margaret Nyakang’o appeared before the senate to confirm yet again what has been flagged by watchdogs for years: The government’s procurement software system is prone to “fraud, error and non-disclosure of revenue.”

Gathungu went further, alleging that the Integrated Financial Management System (IFMIS) is manipulated “deliberately to hide information” from auditors at the close of the financial year.

Nearly two decades after IMFIS was implemented in Kenya to improve efficiency and reduce corruption in public procurement, the system that was championed by President Kenyatta in his previous position as head of Treasury, as well as the World Bank, has become an efficient vehicle for the theft of public funds.

Red flags raised by a previous auditor general identified numerous problems with the system that could be exploited by unscrupulous procurement employees and ministry officials. As early as 2016, auditors found duplicates of the same vendor, each potentially with a different bank account, duplicate and ghost login IDs, and remote access for some system users.

Reporters’ analysis of the leaked data also revealed problematic patterns, like people accessing the system outside of working hours, as well as hundreds of duplicate transactions. 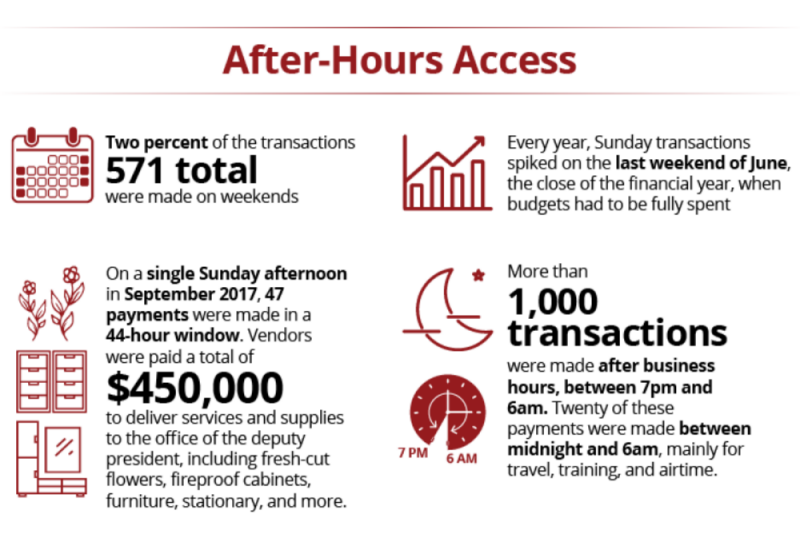 Last year, the government quietly moved to overhaul IFMIS, according to TI-Kenya’s Wachira, who follows the developments on the civil society side. Advocates say there’s been a notable shift at the National Treasury on anti-corruption efforts since 2019, when its former leadership was dismissed in connection with a procurement scandal.

It’s unclear when the overhaul will be completed, and the results of a re-engineered procurement portal remain to be seen. Ironically, the tender awarded to a consortium of companies for technical work on IFMIS is being challenged as an unqualified supplier.

As always in Kenya, a lot will depend on political will –– the “soft system” as the World Bank calls it –– to use the software without corrupt intentions.

“There is a human element to the system,” Kenya’s previous top auditor Ouku told reporters. “If the human element is also not working as expected then the system cannot be perfect.”