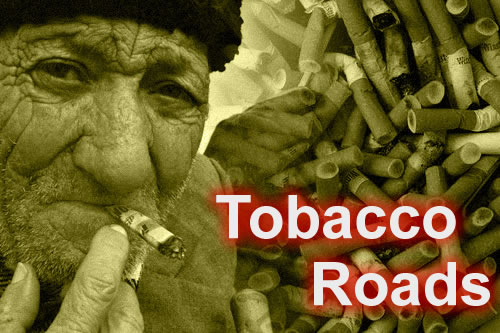 Tobacco is staining the Balkans

While much of Western Europe and the US try to rid their public places of cigarettes and keep children away from tobacco, Southeast Europeans continue to puff away at some of the highest tobacco-use rates in the world.  Up to 50 percent of the population in some parts of the region smoke.

The massive public health problems that will arise from this are not surprising, as the adverse health effects of tobacco are well documented.  But in other places around the world, the tobacco industry at least provides the beneficial offsets of plentiful tax revenues, jobs and regional trade.  This is not the case, however, in Southeast Europe, where smuggling and corruption cancel even those benefits while at the same time enriching organized crime and corrupt politicians.

Bosnia-Herzegovina, for example, loses an estimated $200 million per year in cigarette tax revenues to smugglers and crooks. Worldwide, tax losses could amount to $50 billion, according to the Framework Convention Alliance, a consortium of non-profit groups seeking to stop smuggling. A recent World Health Organization report from 2007 indicates that between 30 and 50 percent of the cigarettes consumed in the region may be illicit.  That compares to 8 to 9 percent in Western Europe, which is still a large number.  Smugglers and illicit manufactures were responsible for the trade of 600 billion cigarettes worldwide per year, the Alliance said.

The smuggled cigarettes in the region often come from Ukraine and Montenegro, a county run by organized crime heavily involved in illegal cigarette smuggling, according to Italian prosecutors. They also come from illegal tobacco factories operating in the region, such as one that was recently shut down in Grude in the Herzegovina region of Bosnia and Herzegovina.  The business of counterfeiting cigarettes is now the “fourth or fifth biggest competitor,” to Phillip Morris International, the overseas arm of the largest tobacco company in the world, said a representative of the company.

Pressure from the European Union has failed to shut down the duty free shops even inside the borders of new EU members Bulgaria and Romania.  Through these shops, huge amounts of cigarettes are laundered and then smuggled into Western Europe.  The shops make no economic sense and are hotbeds of criminality and organized crime, say police and prosecutors.

In Romania, for example, the Minister of Transport’s brother controls lucrative duty free shops that are routinely raided by authorities for illegal sales. The public face of the Ukraine ruling party owns the cigarette wholesaler warehousing illicit smokes, and in Moldova, politically connected figures that control a minority stake in the state tobacco monopoly remain hidden behind a shield of official secrecy.

In Geneva, representatives of some 130 countries met in February of 2008 to agree on a treaty to stop smuggling and counterfeiting.   The Illicit Trade Protocol, an effort of the World Health Organization, may in its final form provide for international cooperation in investigating and prosecuting cases, tracking tobacco products and increasing penalties. The process will be completed in 2010.

Over seven months, a team of investigative reporters found evidence of a massive smuggling road that channels cigarettes from the Balkans to Europe.

The trade is irresistible because taxes and costs have remained low in Southeast Europe while soaring in the West. A pack of Marlboros bought for €0.50 in Ukraine can be sold for €7 in London. Estimates by the European Commission say 8 to 9 percent of the cigarettes consumed in 25 EU countries over the past few years were illegal.

“Tobacco smuggling is the result of many things, supply, demand, price,” said Luk Joossens, European tobacco control expert for the World Health Orgnaization. “In the Balkans it is facilitated by organized criminal gangs and corrupt governments.”

The smuggling is an economic drain. Smugglers underprice and thus undercut local state tobacco factories.  In recent years, most have lost their market shares to foreign brands and smuggled cigarettes, which has lead to job losses. These losses have a trickle down effect on tobacco growers.  For example, in Herzegovina, where tobacco has been cultivated since the Austro-Hungarian Empire ruled the area, only a few families still grow tobacco where there once were hundreds.

Struggling state companies themselves have been lured into tobacco smuggling.  For example, the Financial Police in Bosnia and Herzegovina found that the state owned Tobacco Factory Mostar was selling cigarettes at prices below their production cost to businesses connected to Stanko Subotić, aka “Cane”, the fugitive Serbian businessman who has been indicted on tobacco smuggling related charges in Bari, Switzerland and Serbia. Another state company is under investigation for smuggling.

Bigger than most private enterprises, cash rich and willing to kill or bribe Balkan officials who don’t go along, the power and political influence that cigarette smugglers now wield is difficult to ignore.

The widow and son of disgraced former Serbian leader Slobodan Milošević, once a key figure in the trade, are now embroiled in a messy cigarette smuggling scandal that continues to rock the nation. Italian prosecutors issued an arrest warrant at one time for former President and Prime Minister of Montenegro, Milo Đukanović, for his smuggling activities.  It was dropped because he had diplomatic immunity. Dozens of high and low level politicians and law enforcement officials have been implicated in the trade throughout the region.

As testimony to their power, smugglers act with near impunity.  On the Bosnian border with Montenegro, smugglers have brazenly built private roads across borders to avoid detection.  Montenegrin officials ignore this trade, while Bosnian officials fight an uphill battle to control their borders.  Police throughout the region are making significant efforts in many places, but they are mostly ineffective.

In large part, this is because those involved such as Subotić have so far eluded capture. Subotić remains free, even as fresh December indictments in Belgrade illustrate how he headed a complex network that has evolved almost into a state institution, engulfing a former customs chief, high ranking interior officials and senior Croatian policemen.  He is believed to have sought refuge in Montenegro, where he has good relations with state officials.

Citizens can even order illegal cigarettes directly on the Internet from dozens of countries.  One exporter advised reporters from Romania how they can help get the illegal cigarettes through customs by illegally marking the packages and splitting shipments.

Customs and border police from Serbia to Albania and Croatia to Bosnia have stopped shipments at ports from China. They have busted illegal factories and seized more than 350 million cigarettes in the first six months of last year, a rise of almost a third from the previous year, according to the Southeast Europe Cooperative Initiative, a regional law enforcement agency. Still, law officers complain that the flow of cigarettes is relentless.