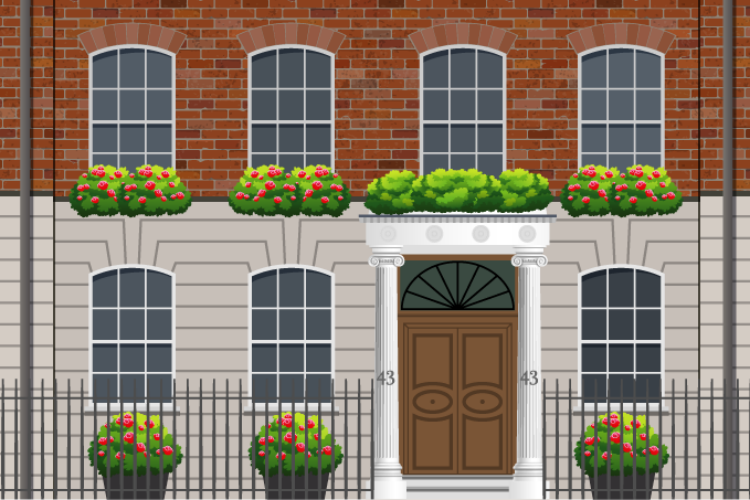 The London property at the heart of a dispute involving Lithuania’s Vladimir Romanov. (Credit: Edin Pasovic/OCCRP)

Vladimir Romanov, on the lam from Lithuania, is suspected of robbing his own bank. Investigators say evidence contained in the Paradise Papers leak of offshore financial data points to how it was done.

The story starts with a small patch of ground on the outskirts of Lithuania’s capital city of Vilnius. It was supposed to be developed into a modern residential neighborhood, funded by a €10.3 million (US$ 15.62 million) loan from Romanov’s bank. The money was used instead to buy a £14.9 million ($29.6 million) property in London at 43 Grosvenor St., Mayfair. The ultimate beneficiary of the deal was Romanov’s niece, Julija Goncaruk.

Romanov has been hiding in Russia since 2014, and a legal battle is still raging over the cash sunk into that London property, according to Lithuanian investigators. Among the claimants jostling for a piece of the spoils is a company that appears to be tied to Romanov’s inner circle.

A Bank With a History

Romanov was long one of the most flamboyant personalities in the Lithuanian financial universe. He owned a football club in Scotland and a basketball team in Lithuania. In both cases, he was famous for sacking coaches and other impulsive actions. 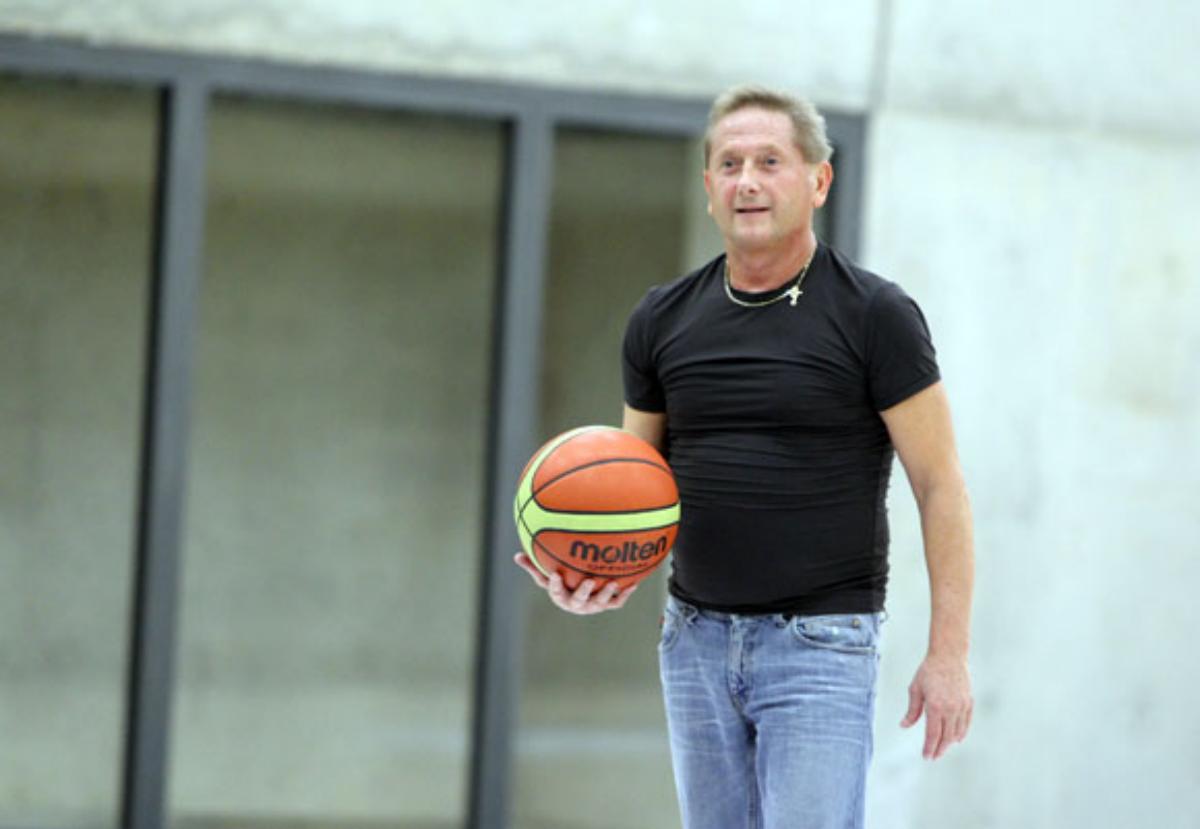 But Romanov didn’t make his money in sports or politics; he made it in banking.

His Lithuanian bank, Ukio Bankas, surfaced in several money laundering investigations, including allegations that it handled some of the Russian money stolen in a scandal uncovered by the late Sergei Magnitsky. Ukio became infamous in 2013, when Lithuania’s Central Bank revoked its license and took it over. A criminal case was launched into alleged embezzlement, and Romanov departed Lithuania for Russia, where he has been granted asylum.

Lithuania cited “harmful actions” by Ukio Bankas’ shareholders as the principal reasons for intervening. Authorities feared that the financial institution, already on the brink of collapse, was being systematically stripped of assets by the people running it.

Ukio Bankas hit the headlines again after the Panama Papers investigation was published in 2016. Romanov’s bank appeared to be one of the financial institutions used for the benefit of Sergei Roldugin -- a close friend of Russian President Vladimir Putin -- who appears to have amassed impressive wealth without any detailed explanation.

Lithuanian law enforcement confirmed that the Panama Papers data was accurate and Roldugin’s offshore companies used banking services provided by Ukio. Kestutis Jucevicius, then the director of Lithuania’s Financial Crime Investigation Service, said that Roldugin-related operations have indications of money laundering. However, he said, Lithuanian law enforcement can’t do much about it, since the money swiftly left the country’s jurisdiction.

Daniliskes is the small patch of land outside Vilnius that was supposed to be transformed into a modern residential area in 2008. According to leaked documents prepared by Lithuanian law enforcement, Ukio Bank lent €10.3 million (15.62 million $) for the plan to a Lithuanian company called Tristanas, owned by Ilja Jaroslavskis, a long-time associate of various Romanov-related companies.

But within days, Tristanas wired the money to England. The company never laid a single brick in Daniliskes. Instead, it went into liquidation a few years later.

This is where the Paradise Papers come in. That’s the name for a leak of 13.4 million documents from two offshore services firms based in Bermuda and Singapore, as well as from 19 corporate registries maintained by governments in secret offshore jurisdictions.

The documents, which surfaced more than a year after the similar Panama Papers scandal, were obtained by the Süddeutsche Zeitung and shared with the International Consortium of Investigative Journalists (ICIJ), which in turn organized a collaborative investigation with dozens of outlets across the world. The group included the Organized Crime and Corruption Reporting Project (OCCRP) and its Lithuanian partner, 15min.lt.​

According to the leaked correspondence of the Bermuda-based law firm Appleby, the Tristanas’ loan from Ukio was funneled to a bank account in the United Kingdom belonging to Vintage Holdings Ltd., an Isle of Man company owned by Julija Goncaruk, Romanov’s niece.

Lithuanian law enforcement says that money and other funds from Romanov’s Lithuanian business was used to buy a building in Mayfair, an exclusive neighborhood in central London.

Vintage got almost £15 million ($29.6 million) from Ukio and related companies in Lithuania, according to law enforcement, most of it from the now-abandoned Daniliskes development project.

In late 2013, Lithuanian investigators moved to seize the London property, but Vintage Holdings sold the building for £21 million ($35 million) before authorities could complete the legal work to claim it. Law enforcement froze the account where the proceeds landed, though some £5.4 million ($9 million) had already been withdrawn. That left just £15.6 million ($19.89 million) under authorities’ control. Recipients of the missing £5.4 million are unknown.

Lithuanian investigators say there is a second asset in the UK that has been frozen in connection with the alleged embezzlement of Ukio’s funds.

Although they would not identify the specific property, it appears to be a £4.2 million ($5.35 million) flat at 19 Rose Square, Fulham Road, about two miles from Buckingham Palace. Goncaruk appears to have moved her business, Meunier Ltd., from 43 Grosvenor St. to 19 Rose Square.

The property looks more like a luxury flat than an office.

A number of claimants say they have a right to the £15.6 million that came from selling the Mayfair property. One is Ukio Bank, which made the original loan. Although it is now bankrupt and under state control, its administrators are seeking to recover whatever funds they can.

Another claimant is Exclusiva General, a company based in the British Virgin Islands (BVI) tax haven, which claims Vintage Holdings owes it money. The Lithuanian law firm Motieka & Audzevicius teamed up with Appleby, the Bermuda firm, to represent Exclusiva’s claims.

According to documents provided by Motieka & Audzevicius, the man behind Exclusiva is Tomas Lesciukaitis, a former law enforcement officer from Lithuania with ties to the Romanov network who has testified in court that he counts one of the country’s most notorious criminals (Saulius Velečka, nicknamed “Cucumber” in Lithuanian)
as a friend.

Since 2012, Lesciukaitis has worked as a public procurement specialist for a municipal company in Kaunas, one of Lithuania’s largest cities. He is also a manager and shareholder in a couple of private companies.

A reporter for OCCRP asked Lesciukaitis where he got the money for the stake in Exclusiva he says entitles him to the frozen millions in London. In a written statement, he said he couldn’t comment due to the ongoing criminal probe into the alleged Ukio embezzlement. He also refused to say if he really is the man behind Exclusiva.

One of the leaked Paradise Papers emails indicates Exclusiva might actually be owned by Olga Goncaruk, Julija’s mother and Romanov’s sister.

Reporters for OCCRP asked Motieka & Audzevicius for comment. The law firm says the statement by Julija Goncaruk should be disregarded.

“No one has seen evidence that Ms O. Goncaruk owns that company. It is therefore difficult to consider such statements as anything but imaginary,” said Ramunas Audzevicius, a partner in Motieka & Audzevicius.

Audzevicius declined to say whether Lesciukaitis truly owned Exclusiva, saying that his law firm has “an obligation to not disclose information entrusted to us.” Audzevicius also wouldn’t disclose his clients’ identities. He also rejects any possibility that Romanov or his relatives are the real owners behind Exclusiva General.

“According to the understanding of our foreign colleagues, which I have no reason to doubt, Mr. V. Romanov does not stand behind Exclusiva General,” Audzevicius said.

“Our clients are those few lucky ones who, after the bankruptcy of Ukio Bankas, won cases against Mr. V. Romanov and Ms. O. Goncaruk personally and have enforceable court decisions recognized beyond Lithuanian borders,” Audzevicius explained.

An OCCRP reporter reached Romanov’s niece, Julija Goncaruk, by phone. “Who’s calling?” she asked in Russian. Upon hearing that the caller was a journalist, Goncaruk hung up and didn’t answer any further calls. Recent attempts to contact her were unsuccessful.

Investigators say Goncaruk, her uncle, and her mother are all suspects in the criminal case into embezzlement from Ukio Bank. Lesciukaitis, the official owner of Exclusiva General, is a “special witness.” The designation is similar to the term “person of interest” in Western countries, meaning someone who hasn’t been arrested or charged, but may have useful information or other significance in a case.

The battle over the millions likely stolen from Romanov’s bank is still simmering. The ongoing criminal case involves 18 suspects allegedly connected to stripping assets from Ukio, and in October, Lithuanian law enforcement officials asked their Russian counterparts to assist in questioning Romanov.

The £15.6 million in remaining proceeds from the Mayfair property’s sale remains frozen.