A masked man holds up a blank sheet of paper in front of the committees of the Verkhovna Rada on Oct. 1 in a successful protest to kill a law to criminalize libel.

After public pressure killed an attempt in parliament to criminalize libel last October, many on both sides warned the battle was not over. Those forecasts appear to be coming true.

Renat Kuzmin, Ukraine’s first deputy prosecutor general, openly called for criminalization of libel as early as next year. If the parliament dominated by the pro-presidential Party of the Regions agrees with Kuzmin and passes such a law,

critics say it would mean the death of free speech and free press in Ukraine.

“Every attempt to impose criminal liability for defamation is a direct threat for professional journalists, who try to expose bribery, corruption and nepotism in Ukraine,” reads a March 20 statement by the International Federation of Journalists, responding to Kuzmin’s initiative.

In a 12-page opinion article entitled “The Technology of Defamation,” published on March 16 in a niche Kyiv-based Law and Business weekly, Kuzmin argues that defamation is harmful and cites recent events in Ukraine.

Many of Kuzmin’s arguments in favor of libel criminalization relate to criminal cases against imprisoned Yulia Tymoshenko. Kuzmin is leading an aggressive effort to prosecute the former prime minister for various crimes in what Western leaders have called a selective application of justice.

In his article, Kuzmin considers such criticism as nothing less than defamation designed to exert pressure on the country’s court system and, therefore, extremely harmful. The tenor of the article is that Ukraine’s law enforcement, particularly its courts, should be immune from criticism.

After all “the divine nature of the judiciary is emphasized even in the biblical texts,” writes Kuzmin, heavily seasoning his arguments with quotes from the Bible.

According to Kuzmin, some of the examples of defamation in Ukraine include the 2004 Orange Revolution that resulted in the Supreme Court decision to hold a repeat second round of presidential elections that cost then-Prime Minister Viktor Yanukovych the presidency.

The Tymoshenko case and public protests against the court decisions fall under the same category in Kuzmin’s line of thinking. “This is an ominous tendency, which can destroy Ukraine’s judiciary, if it’s not stopped,” he writes.

A significant part of the op-ed is dedicated to “defamatory” actions by Western politicians. The definition appears to be broad and include any statements by European Union and U.S. officials calling on the Ukrainian government to stop prosecution of political opponents.

“As an example of intimidation, one could cite the U.S. Senate resolution 446 on Ukraine, which talks about sanctions against those involved in Tymoshenko’s imprisonment,” Kuzmin says. “You cannot omit provocations and attempts to illegally arrest (me) in the U.S., (the) first deputy prosecutor general of Ukraine, in order to stop the investigation into the murder of member of parliament Yevhen Shcherban, and intimidate Ukraine investigators and judges.”

In October, Kuzmin had his U.S. visa revoked for violating its conditions. The U.S. authorities said he traveled to the U.S. to question a key witness in a new case he was investigating against Tymoshenko while using a tourist visa. He was then denied a new visa to visit the United States earlier this year. 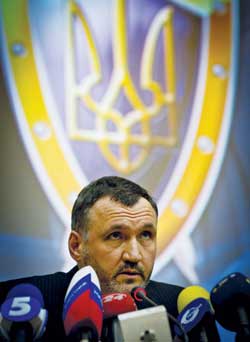 In his op-ed Kuzmin specifically mentions “defamatory” remarks against him made by Anders Aslund, senior fellow at Washington-based Peterson Institute for International Economics and Steven Pifer, the former U.S. Ambassador to Ukraine. In both cases, Kuzmin writes, the reason for the criticism is Aslund’s former and Pifer’s present affiliation with the Brookings Institute, a leading U.S. think tank.

“These sorry politicians have got to be asked whether their fiery speeches are caused by their former and present employments with Brookings Institute, where such a person as Victor Pinchuk is a member of (the international advisory council), whose father-in-law Leonid Kuchma is accused by the entire world of murdering Georgiy Gongadze.”

Kuzmin also engages in a personal attack when explaining why Elmar Brok, head of the European Parliament foreign relations committee, is also joining the chorus of Kuzmin’s critics.

“One could ask about the leisure time of head of European Parliament foreign relations committee accompanied by escort girls and large volumes of alcohol at a nightclub in Kyiv’s Troeshchyna (an outskirts residential area).”

In conclusion, Kuzmin proposes to include the article on defamation to the Criminal Code, which is due to be considered by parliament in early 2014, based on his analysis of “criminal codes of European countries and the problems faced by the Ukrainian justice system.”

Within days of its publication, Kuzmin’s views on libel criminalization caused a wave of sharp criticism both in Ukraine and internationally.

The “media community understands that corrupt officials will punish not the brazen writers who really spread out false information,” says the union statement. “It’s the honest journalists, who expose bribery, corruption, nepotism, criminal schemes the government is involved in that will get prosecuted.”

Meanwhile, Arne Konig, president of European Federation of Journalists, urged officials not to use the outdated libel legislation in some European states as a model.

“Journalist organizations like the EFJ, but also international organizations like the Council of Europe and the Organization for Security and Cooperation in Europe are trying to put an end to criminal procedures for defamation across Europe,” said Konig. “Our message is clear: criminal libel laws are not only disproportionate, but they also have a chilling effect on the willingness and ability of journalists to do their job effectively.”

Ironically, Ukraine named protection of freedom of speech and, particularly, decriminalization of defamation among member states, one of its priorities during its OSCE chairmanship this year.