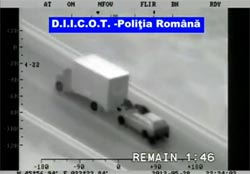 A viral video showed Romanian thieves trying to rob a truck while it was moving at high speed.  But the men behind the attempted theft have lived their own fast and furious lives thanks to the Romanian authorities repeated leniency.

The end of the road for Sile the Money Lender this time was literal – a German highway near Frankfurt where he was arrested running away from a guilty verdict back home in Romania for organized crime, racketeering, prostitution and more.

Sile, actually Vasile Balint, 44, who has under older brother Ion Balint, 48, helped build one of the biggest organized crime networks in Bucharest, spent time in a German jail before being shipped to Romania late last month (July 24) where prison awaits him. Again.

He faces five and half years this time. In five previous convictions for major crimes that go back some 25 years, Balint has already spent about 11 years behind bars, more than his brother and others in the gang. But that punishment pales besides a listing of his crimes, which have continued unabated.

The Organized Crime and Corruption Reporting Project (OCCRP) has found out why. Combing through court records, OCCRP has discovered that a weak and overly gentle Romanian judicial system plus the quirky mercy of two presidents from completely different regimes, Nicolae Ceausescu and Ion Iliescu, helped Balint escape justice and expand the illegal network.

The Romanian system is not designed to keep career criminals out of circulation for long.  Criminals convicted of multiple offenses serve only a single term for their one crime carrying the longest sentence. Plus, as Sile The Money Lender has learned, they can win early release even from reduced sentences if they behave well in prison or the country’s leader is feeling celebratory.

Had he, instead, been held to the punishments attached to each of the crimes he has been convicted of, Sile the Money Lender would not be hitting the road again for at least another 261 and a half years.

The Balint brothers got worldwide attention a few months ago when members of their criminal clan were filmed daringly trying to rob a truck going full-speed down a Romanian highway. Organized crime and terrorism police released the real life "Fast and Furious" video and it was broadcasted widely.

If that was the clan’s latest caper, it is harder to identify Sile The Money Lender’s first crime. OCCRP found court records showing he was sentenced to five years in March 1989 for multiple burglaries. But those documents identify him already as a repeat offender.

The March 1989 verdict mentions that the gang’s members had previously been freed from jail on Jan. 26, 1988, on Nicolae Ceausescu's 70th birthday. The former dictator had a custom of letting people go free on his birthday.

“Ceausescu used to sign such decrees either on Aug. 23, (the Romanian National Holiday,) or on his birthday,” said Romanian historian Stelian Tănase. ”More frequently on his birthday, as he wanted to draw attention upon himself.”

In the six months, after Ceausescu released him, from late January through mid July 1988, when police arrested them again, the gang led by the brothers raged through Bucharest burglarizing 50 homes in a thoroughly planned operation. They would scale balconies, break open doors and steal anything that could be sold on the black market of Communist Romania: bedspreads, carpets, lamps, watches, coffee packs, bars of soap, gas cylinders, VCRs, cassette recorders, head phones, photo flashes, gold necklaces, leather jackets, and fur hats.

The March 1989 records show that Sile The Money Lender, then just out of his teens, had masterminded nine burglaries, for which he was sentenced to eight years. And in a separate trial he and his brother also were convicted of involvement in 41 other burglaries for which each got five years.

The brothers came to illegality early. They were born in Ferentari, the gloomiest neighborhood of the Romanian capital, a rundown corner of the city, mainly inhabited by Roma. Older brother Ion shares a similar nickname -- being called Nutu the Money Lender. Their nicknames– appear to have been inherited from a grandparent famous for that activity.

Police records show that the younger Balint dropped out of school in the fourth grade and not long after fathered two children. The more ambitious older brother finished the eighth grade and was a qualified driver. 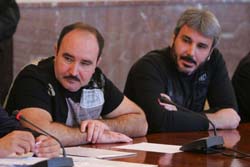 Despite their impressive array of burglaries, by Jan. 16, 1990, the two brothers were again freed – a gift from the country’s new democracy. Romania’s first post-Communist leader, Ion Iliescu, to celebrate the  collapse of the old regime opened the gates for inmates.

The Balint brothers went back to jail four years later – this time for violence, extortion, blackmailing and kidnapping. In August and September 1994, acting as “collectors”, they harassed and mugged two families, taking their cars, money and jewels. They savagely attacked a third family with swords and clubs on the streets of Bucharest.

However, while the Balints were sent to court immediately afterwards, they were released just three months later as the trial unfolded– incredibly, because they were deemed not a big threat to society. Two years later, in 1996, the case reached a first guilty verdict and moved on, to the Tribunal of Bucharest, when the Balints appealed.

There was no retrial, however, because their entire court file and even the indictment simply disappeared from the archives. It is hard to call this mishap an accident. Another court file – concerning other members of the clan, including the Balints’ sister, Angela Stoica, being tried for pimping vanished in the same manner in the same year.

Prosecutors needed almost six years to reopen the case – after gathering and putting together all the evidence of the 1994 crimes. In the meantime, some witnesses withdrew their testimony – some citing rumors of threats and others saying they did not remember the case. . That made the investigation linger more, but the brothers were finally convicted in July 2004 and sentenced to six years in prison. 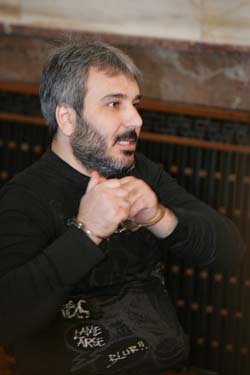 The clan had other legal difficulties, records show. In 1995, Sile The Moneylender was sentenced to two years for using a fake passport in the name of “Cristian Neacşu”. while trying   to cross the Russian-Polish border in 1992. His appeal of that charge lingered until 1998. At that point, Nuţu The Moneylender tried to bribe judges to buy his brother’s freedom, with the help of another notorious mobster, Dănuţ Udilă. He was ready to pay $100,000 USD to get his brother’s sentence postponed or canceled, though he wound up shelling out half that when he realized Udilă intended to cheat him.

In a statement to prosecutors he said: ’’I thought Dănuţ Udilă had more and better-placed connections than me and I turned to him hoping he could solve my problem.” But the problem remained unsolved and Sile The Moneylender went to prison in September 2001.

He served 15 months of a two-year sentence then was released for good behavior in December 2002.

The trial of 30 defendants

In 2003, the two brothers were again free and used the opportunity to develop their business, moving into prostitution and extortion. Relatives and associates helped them coordinate a criminal group of about 200, prosecutors estimate. In 2004, about 30 of them wound up in court in one of the largest investigations prosecutors had ever undertaken to dismantle the clan. The final verdict came from the Supreme Court of Justice, in March 2008, and saw Sile The Moneylender being convicted to 13 years in prison.

While the crimes he had been convicted of actually added up to a punishment of 45 years, 13 would still have been a heavy sentence in the Romanian legal system – if he had actually served it.

But since, Sile The Money Lender was already in prison, serving the six years meted out to him in 2004, authorities merged the newer sentence with his older one, meaning just seven years were tacked on to the six he was already serving.

Thanks to these built-in-indulgences of the law, he should have stayed in prison until 2017. But he didn’t even do that. In December 2011, the judges set him free on probation, in consideration of his improved social behavior and again concluded he was no longer a danger to society.

The family welcomed him home to Ferentari with a memorable feast, according to press accounts. But freedom did not last long again.

In May 2012, another court ordered him to serve the full 13-year sentence for felonies perpetrated in 2003. But again it sounded worse than it really was. He was told to serve out the time he got off for good behavior.

But that’s when he took off and Romanian police issued an international arrest warrant leading to his capture in Germany and return to Bucharest.

For all that effort, with good behavior he could be out again by 2017. Or earlier.

Here is the list of Sile Cămătaru’s criminal sentences, starting from the most recent: 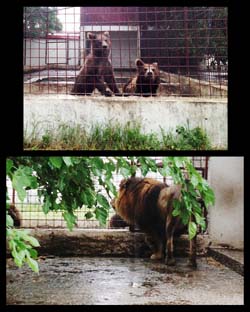 Nutu Camataru keeps a lion and two bears in the backyard of his house in Bucharest/photo: Matt Sarnecki

The estate of Nutu Camataru is barricaded within the stray dogs, beltway prostitutes and languishing apartment blocks of the notorious Ferentari neighborhood of southwest Bucharest. The compound’s walls surround a bizarre scene. Near the driveway, two brown bears prance around in a cage. An adjacent enclosure houses two lions. Further down the driveway, past an equestrian field, a barn-like structure houses a variety of exotic parrots. A constant stream of vehicles – a tinted BWM sedan, a Harley Davidson motorcycle, a motorized scooter – stream in and out of the estate’s gate.