The head of the Appeals Court in Kosovo, Sali Mekaj, was placed under house arrest yesterday while he is investigated for misuse of authority. 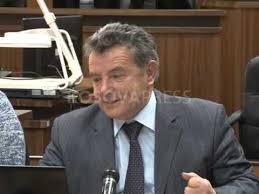 Sali Mekaj. Photo: Kosova Press.The Special Prosecution of the Republic of Kosovo said Tuesday that a 48-hour detention order had been issued on July 20 for Mekaj, on suspicion of “abusing official position or authority” and “trading in influence.”

Another suspect, a woman identified by the prosecution only as V.G., was also detained on that date in connection with the judge’s case on suspicion of bribery.

The judge appeared before the Basic Court on Wednesday and Thursday for a hearing on whether to extend his detention. Media were barred from the hearing.

Mekaj’s passport was seized as a security measure.

Albanian news agency Bota Sot identified the woman as Vlora Gorani, who was allegedly attempting to persuade Mekaj to release two people: her husband, who is detained on suspicion of incitement to murder and attempted murder, and another person suspected of narcotics offenses. Gorani also had her passport confiscated and is under house arrest.

Local expert Belul Beqaj told Balkan Investigative Reporting Network (BIRN) that the arrest of such a high-profile figure “could mean a process of cleaning the judiciary of the obstacles that have brought it to the pitiful state it is currently in.”

Lawyers for both suspects have denied the allegations against them.