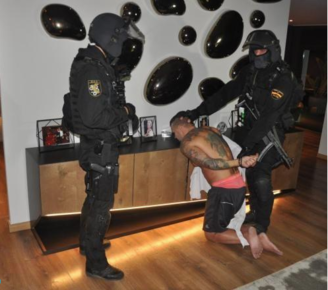 Spanish police arresting a suspect (Photo: Europol)Operation Beautiful is the result of a year-long investigation targeting the largest Spanish drug trafficking group in the Levante area, in the east of the country.

The arrests and seizures were made over one year with the final ones carried out in late September, with more than 200 Spanish police officers descending on 13 houses, arresting 42 people in Alicante, Valencia, Madrid and Barcelona.

In one search, police say they discovered €1 million (US$1.08 million) hidden in a panic room belonging to the person they believe to be the group’s ringleader.

Those arrested face charges of laundering over €7 million ($7.6 million).

Authorities claim the group behind the drug trafficking ring was “particularly violent,” and the investigation spurred the alleged gang members to become more reckless - leading to their arrest.

Europol says the gang had a variety of highly structured groups, such as a security team in charge of surveillance and even a group which impersonated police officers and committed violent crimes.

According to Las Provincial, one of those arrested was the former sports director of Club Deportivo Dénia - a Valencian football team.

Operation Beautiful comes on the heels of another large seizure in Spain, with almost 700 kilograms of cocaine found in Malaga.

In that case, police say four people were arrested and suspected of using shipping routes between Morocco and Spain to bring in cocaine, which was then dispersed and sold to the rest of Europe.