Former President Viktor Yanukovych’s opulent residence only had one major contractor: a development company called AVK, with an intriguing history.

Its ownership was disguised behind a proxy. The company’s purpose and operations were as murky as the waters of the lake where the firm’s company files were unceremoniously dumped when Yanukovych fled Ukraine.

The company spent like there was no tomorrow, and a lot of the cash went for things that had nothing to do with construction, such as luxuries for Yanukovych and his family. It ran its business as if it were immune to any prosecution or reach of controlling authority, as if the good times would last forever. 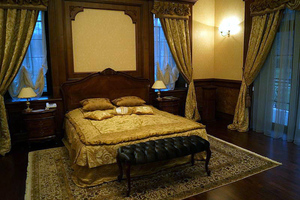 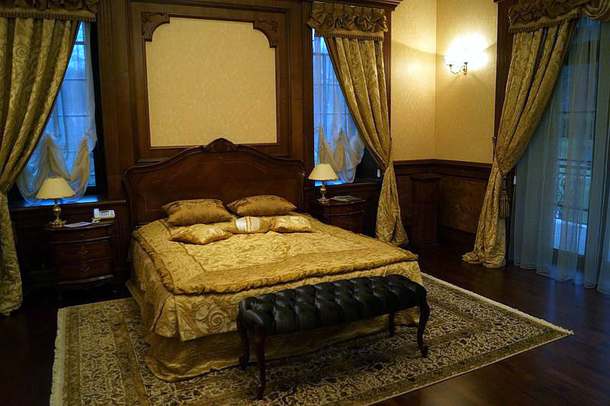 The documents give a glimpse of the monies lavished on Mezhygirya.

Between 2010–2011, the contractor sent multiple invoices to Tantalit, a real estate management and construction company that on paper was the formal owner of Mezhygirya. The invoices were tied to numerous contracts and commissions given to the firm during the years of active construction of the 140-hectare presidential estate. Many of the invoices are for work that is not similar and ranged from procuring decorative woodwork to conducting media monitoring.

And the sums were not small. When decorative woodwork was commissioned for the billiards room of the main house, typically referred to as Honka, the bill was €1.6 million (US$ 2.2 million). Wooden elements elsewhere in the house cost€2.7 million (US$ 3.7 million). Tens of thousands of dollars were spent on bathroom accessories, making the rooms so over the top that the common reference for them has become“the golden toilets.”

Money was lavished on the grounds as well. According to one contract, Hr 2.5 million (US$312,000) was paid for “improvement of the embankment.”There are hundreds of similar contracts.

A few dozen other contracts involved much bigger sums and more questionable expenditures, such as a media monitoring contract worth Hr 60 million (US$ 5.3 million).

Natalya Ligachova, head of the nonprofit organization Telekritika, says that even the most sophisticated type of monitoring of both regional and national media, employing top professionals, will not run over US$20,000.

The source of AVK’s cash

As the main contractor, AVK received much of its money from Tantalit. But plenty came from other companies allied with the ex-president’s close circle, dubbed “the Family.” Millions were paid to AVK by Dom Lesnika and the charity foundation, Revival of Ukraine, for “services provided according to contracts.”

The most interesting part of the income was identified in payment declarations as “infusions from investors” Including Ukrbusinessbank, or UBB, which appeared frequently. In August of 2010, for example, AVK received Hr 26 million (US$3.25 million) from UBB.

According to Ukrainian Forbes, Ukrbusinessbank is controlled by the ex-president’s elder son, OleksandrYanukovych.

In 2009, one of the shareholders of this bank was Eduard Prutnik, who was adviser to then-Prime Minister Yanukovych in 2002-2005, and his right-hand man. Until May 2010, the bank’s top manager was SerhiyArbuzov, who then moved on to be National Bank governor and first deputy prime minister under President Yanukovych.

VitaliyShabunin, Head of the Board of theAnticorruption Action Center, a watchdog agency, says that considering AVK’s statutory capital of Hr 4.54 million (US$400,000), and the number and nature of its financial transactions, it’s pretty clear what it was used for. “As we are talking about millions of hryvnias – this is laundering, 100 percent,” he said. It is common when laundering money to issue contracts for work that cannot be easily traced such as vague business services.

The whims of a rich company

Some of AVK’s expenses have little relation to construction. The company paid Hr 79 million (US$9.9 million) to prepare the sale of what was referred to as a “culture and heath center”. A study of the market for medical equipment cost AVK a whopping Hr 96 million (US$12 million). Another market analysis of public housing cost Hr 45 million (US$5.6 million).

All these services were paid for in October-December 2010, less than a year after Yanukovych became president in February.

Some services were purchased more than once. For example, the public housing market study was commissioned three times on the same day from different companies, and the total costs were nearly Hr 200 million (US$25 million).

The total expenditure in this three-month period was well over a billion hryvnias (US$125 million). Anti-corruption expert Shabunin says, “These transactions are a cash-out service, basically. Even just those (salvaged) certificates are enough to send (some officials) to prison for life.”

Many of the companies that received payments have already disappeared. Moreover, their official activities had nothing to do with the services they rendered to AVK.

For example, the three companies Belite Prim, Blumarine Bud and DESA LTD, founded in a short space of time in 2010 just weeks before receiving cash from AVK, have already ceased their business activities. The closure of at least one of them was handled by a company that also received money from AVK.

Another recipient, NS Bright LLC, was registered at a non-existent address. Yet another one, ARS – Alliance LLC, was actually a firm that recycled scrap metals. The general prosecutor’s office, which received the original documents, is investigating just how much money may have disappeared.

AVK and its clients

Officially, AVK received its commissions for Mezhygirya from Tantalit LLC, which was registered in the name of SergiyKlyuyev, a Parliament member of the Party of Regions and the brother of the former head of the Yanukovych administration.

Tantalitrented 129 ofMezhygirya’s 140 hectares. Officially, the former president owned only 1.8 hectares. The rest was the property was owned bythe charitable foundation, Revival of Ukraine.

The proxy owner for Tantalit in 2011-2012 was PavloLitovchenko, but the list of owners changed a number of times.

Ukraine’s Information Resource Centre, a database of companies, lists Cherkasy resident Dmytro Sidlyarenko as the owner of AVK. The company closed down on March 15, 2012, but Sidlyarenko remains co-founder of two TVchannels, TRK Soyuz-TV LTD in Zhytomyr and TRK Rivne1 LTD in Rivne.

Officially AVK was registered in Kyiv, on 4 Zakhidnylane. But actually this address belongs to a branch of the state-owned Pension Fund in the Solomyanskiy district of the capital. “Nobody rents space here,” a surprised security guard says. “There are a lot of different companies around us. But their addresses are different. I have never heard about this company.”

Sidlyarenkocan be traced on the Internet from a time. Heposted a resume and was looking for a job, stating he was looking for “opportunities for career growth” and a salary of US$ 900 per month. But the owner of the phone number listed on the resume says they have no idea who Sidlyarenko is.

Before Sidlyarenko, the official owner of AVK was VitaliyVladlenovuchSakhatskiy. Until recently, a man with that name had been working as head of the construction department of the state company that managed government-owned residences and other properties. He has not been seen at work for some time, though.