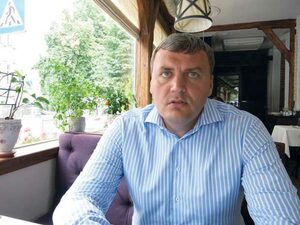 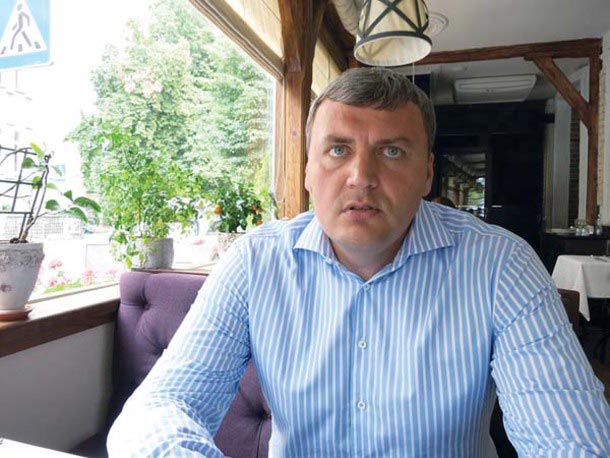 The empire of overthrown President Viktor Yanukovych extended beyond his billion-dollar Mezhyhirya estate.

He also kept residences in the Carpathians and Crimea and luxuriant hunting estates in the vicinity of Kyiv. He collected cars and made sure his travel was fast and comfortable with personal helicopters and a plane. He held receptions with expensive champagne and other pricey treats.

All of the luxuries were courtesy of Ukraine’s taxpayers, bought and maintained through the state Asset Management Department, known in Ukrainian as DUSya. During Yanukovych’s four-year presidency, the department was managed by Andriy Kravets, 41, a reclusive operative nicknamed “Yanukovych’s caretaker.”

Documents Yanukovych left behind at Mezhyhirya when he fled on Feb. 21 show that Kravets was far more than a caretaker. He was a key person in running the ex-president’s empire, a confidante with the power to appoint the right people to the right places.

Now, like the president and many other disgraced top officials of the former administration, he is gone.

Where Kravets comes from

“I would also like to know where he is,” his mother Lyudmyla Bytsiuk told reporters by phone. When the ex-president escaped to Russia, Kravets and his wife, Maryna Pelykh also disappeared.

Kravets did not respond to requests for comments for this story, either to direct calls to his mobile phone or through intermediaries.

A native of Komsomolsk in Poltava Oblast, Kravets started out as an electrician’s assistant in the early 1990s. Later he started and headed a number of firms in Kremenchuk and Cherkasy, engaging in a range of fields from fuel to the financial sector.

“He had a network of fueling stations,” said Yuriy Pelykh, secretary of the management board of the state building company UkrBud and a former in-law to Kravets’ wife. “I would not say that his business was not going well. But he sold it there and they moved and rented an apartment in Kyiv. I helped him get employment” at a house-building company called Merkuriy in Brovary, a suburb of Kyiv.

The Merkuriy company, while Kravets’ first step in Kyiv, lasted only a year. In 2004, he landed two jobs, as head of the Zoryany cinema and head of Ukrbudinvest company. By then, Zoryany was the site of congresses and meetings for the Yanukovych-led former ruling Party of Regions. Ukrbudinvest, meanwhile, started to get involved in the construction of Mezhyhirya near Novi Petrivtsi, some 15 kilometers outside of Kyiv.

Mezhyhirya was officially a culture and health center, but over time it was transformed from a modest state dacha into a sprawling presidential manor on 140 hectares. A charity foundation, Renaissance of Ukraine, commissioned some of the work and became the proxy owner of part of the land where the residence stands.

Kravets was elected to Parliament on the Party of Regions list in 2007,and he grew closer to Yanukovych. At this time, Yanukovych, then prime minister, acquired another property – a hunting estate in Sukholuchya, near Mezhyhirya.

Yanukovych’s government approved a decision to transfer the Dnipro-Teteriv forest to a state committee on forestry, which then transferred 17.5 hectares to TOV Dom Lesnyka, a shell company linked to Yanukovych.

This company has several ties to Kravets. Its official address is Office 16, 90 Kirova St., Brovary. The building was built by the Merkuriy construction company and the office itself belonged to Maryna Pelykh, Kravets’ wife.

While Mezhyhirya was taking shape, work also was being done on a Crimean property that would eventually become Yanukovych’s residence at the picturesque Aya Cape.

In the summer of 2007, state-owned property in the Crimea was purchased by Arktur-Krym, a firm founded by UkrKyivResurs, which was registered at the same Brovary office as Merkuriy. Arktur-Krym also received 3.5 hectares by the sea in Crimea.

At the same time, Kravets’ Ukrbudinvest also thrived. In 2007, the company built the Akula office center in Donetsk, which filled with companies owned by Yanukovych’s elder son, Oleksandr. Oleksandr Yanukovych and Kravets were linked in this and other ways. 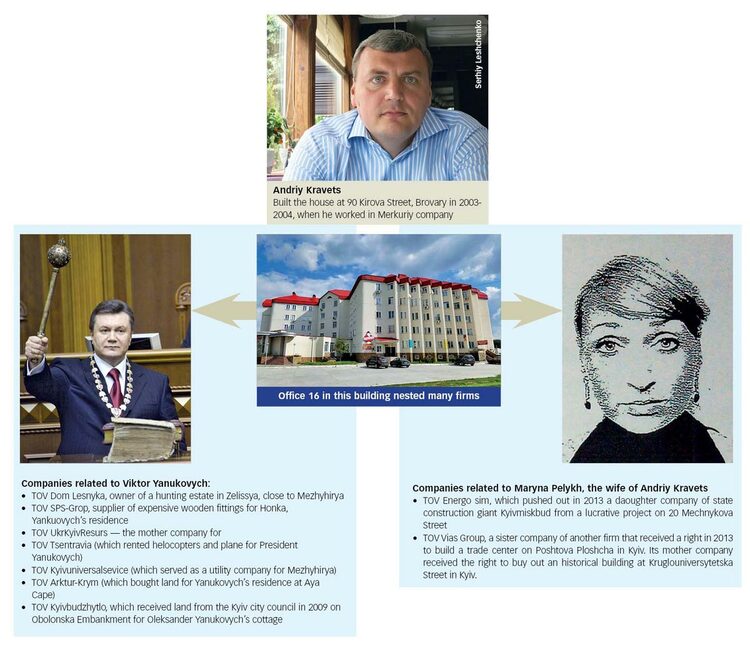 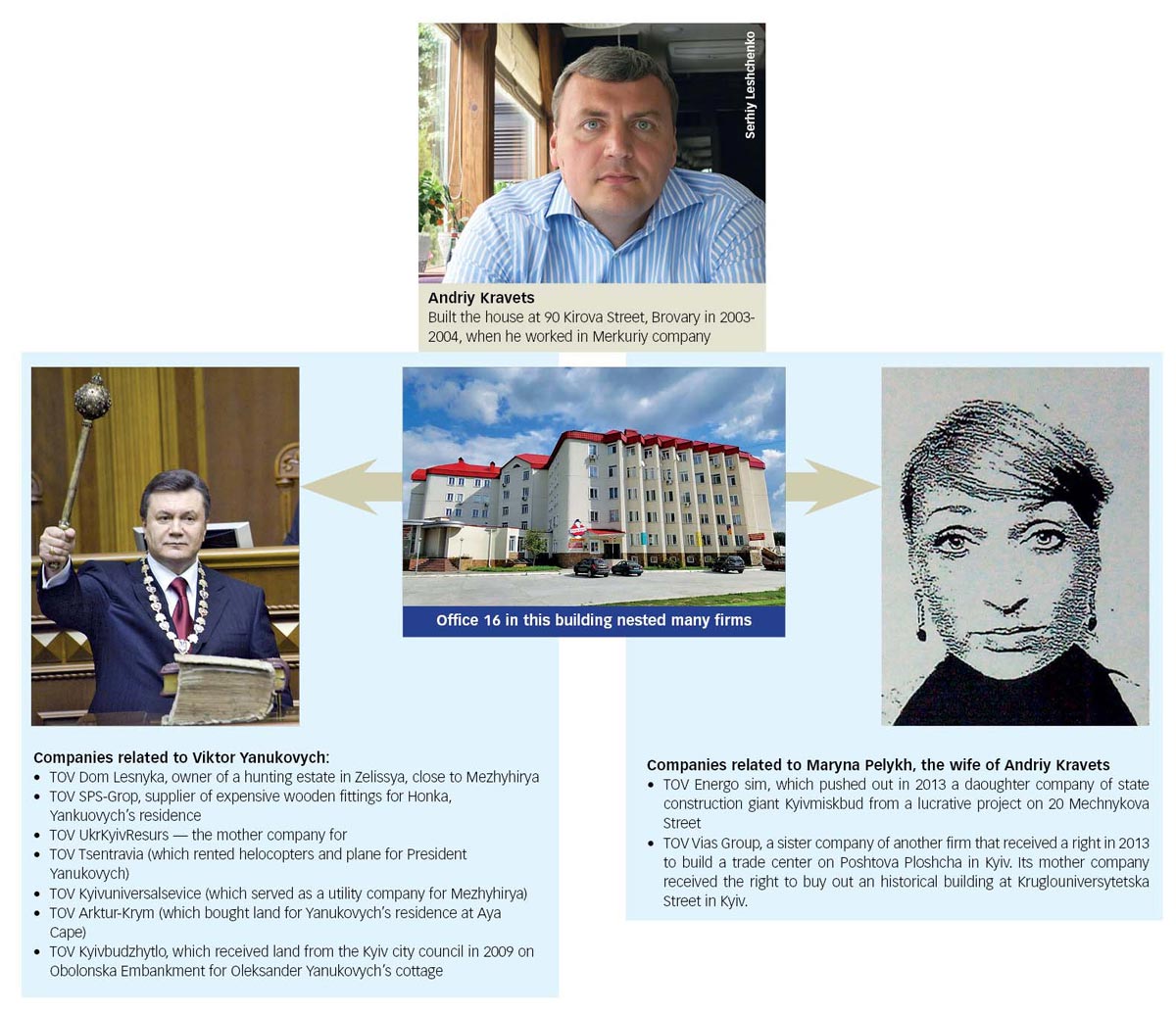 Kravets was becoming a confidante of the former president and his family about this time. They trusted him with money as evidenced by payment orders that show Kravets received $5,000 per month from Yanukovych’s main company, Tantalit, for hospitality-related expenses. The money was spent on birthday presents for officials.

One payment order shows that Anatoliy Chub, then-head of the Main Department of Communal Property of Kyiv, and Irena Kilchytska, a deputy Kyiv mayor, received presents. The list of recipients is heavy on officials from the mayor’s office and the Kyiv City Council.

In October 2009, the Kyiv City Council voted to transfer a plot on the prestigious 33 Obolonska Embankment to Kyivbudzhytlo for a cottage. Oleksandr Yanukovych got a house here, according to Mezhyhirya documents. Kyivbudzhytlo has one founder — Dom Lesnyka, a Yanukovych company also located at 90 Kirova St. in Brovary in the office belonging to Kravets’ wife.

The year 2010 was a watershed for Yanukovych and Kravets. Yanukovych was finally elected president, six years after the 2004 Orange Revolution denied him the post.

Kravets became head of DUSya. From that point on, Kravets took care of the president’s whims – at taxpayers’ cost.

They kept the president in style, from the 75 sets of tableware for Crimean presidential dachas that cost Hr 400,000 (US$ 33,600) to a Hr 331 million (US$ 27.8 million) upgrade of the National Center for Radio Surgery at Feofaniya, a clinic that only treated top government officials.

The Feofaniya medical center was one of the few topics that Kravets discussed publicly. “In the Feofaniya clinic, a radiological center will start working. It will work for the whole country, not just officials, and it needs serious financing,” Kravets told the Segodnya newspaper in December 2010.

The founder of the leasing company, Centeravia, was Ukrkyivresurs — the company that founded TOV Arktur-Krym, which acquired land on behalf of Yanukovych. In effect, budget money to rent helicopters for the president went into his private pocket.

Good for Yanukovych, good for friends

Companies tied to Kravets and Yanukovych generally did well from contracts with DUSya. For example, in December 2012, one of DUSya’s daughter companies, Chaika, commissioned construction of a dairy farm in Chernihiv Oblast. Almost Hr 91 million (US$ 7.6 million) was paid to Ukrbudinvest, which was once headed by Kravets.

His first employer’s company, UkrBud, got a contract in autumn 2010 to reconstruct a publicly owned building in the prestigious Kyiv suburb Koncha-Zaspa, and paid more than Hr 14 million (US$ 1.1 million) for it. Yuriy Pelykh, the head of UkrBud, says everything was honest.

Kravets’ wife Maryna Pelykh was also useful to Yanukovych. Her phone number was listed in at least one notebook maintained by Yanukovych’s personal guard in Mezhyhirya and her company’s three cars were on the short list of 50 that could freely enter the territory of the president’s private residence.

Her company in Brovary officially housed companies related to Mezhyhirya. Two of her own firms were also registered there.

Pelykh firms over the past three years received a handful of plots and properties in elite parts of Kyiv: a site for a trade center on Poshtova Ploshcha (which was recently reversed by the court); an historic mansion on Kruglouniversytetska; a site for a construction project close to the Pivdenny railway station, and other sites on Mayakovskiy Street and in Svyatoshino district; a plot on Peremohy Prospect; another one close to the Klovska metro station; one on Khreshchatyk Street and another one along the main street’s Passage area.

This business empire still exists, but few want to talk about Pelykh.

“I spoke to her for the last time on Feb. 22. Marina Arkadievna (Pelykh) called and asked me to go to the Zoryany (cinema) and watch the people who organized a takeover. I could not hear her well. There was background noise. It seems she was in a plane,” one of the Zoryany workers recalls.

On June 18, Ukrainian journalist Serhiy Leshchenko wrote on his Facebook page that Kravets was back in Ukraine. But YanukovychLeaks could not independently verify this or locate him.

Maksym Opanasenko is a Ukrainian journalist with the YanukovychLeaks project, a project to document alleged corruption in the administration of President Viktor Yanukovych, who was overthrown on Feb. 22, by the EuroMaidan Revolution.