by Ana Poenariu
Tweet this Share this on Facebook DONATE
Above: Raoul Cizmasiu, survivor of a fatal coal collapse in the Lupeni coal mine. Credit: Ana Poenariu

When he regained consciousness, Raoul Cizmasiu felt no pain. Just an overwhelming desire to escape.

The last thing he remembered was the coal falling from the ceiling of a tunnel in the Lupeni coal mine, half a kilometer below the surface.

He looked around and saw rats closing in on the dead body of his friend Iulian a few meters away. Cizmasiu crawled over and chased them away with his headlamp.

Then he heard Florin. He pointed his lamp in the direction of the voice and saw that half of his colleague’s body was buried in coal. His head was caught between two collapsed pillars.

Cizmasiu had no chance of reaching him.

“Get me out of here! Raoul, help me, I have a little girl at home,” he still hears Florin’s voice echoing in his head, even two months after the October 5 mining accident.

While he waited for rescue, Cizmasiu thought of death. “I thought about puncturing my femoral artery to make sure I’d die quickly,” he said.

It took rescuers 13 hours to reach the trapped men. 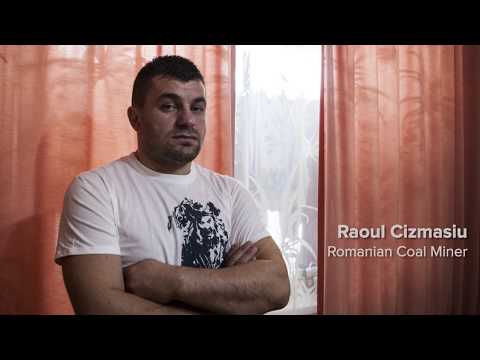 Florin Ioan Suciu died in the hospital 24 hours later. He was 44. Iulian Codlean was buried on his 40th birthday a few days later.

Cizmasiu survived, but despite receiving therapy, he is a broken man. Apart from Florin’s begging, another question haunts him: Why? “Everything, everything in my head is reduced to this question,” he says.

Any way he turns it, he comes to the same conclusion: The poor quality of the pillars that supported the ceiling were to blame. They were old and due for a replacement.

The state-controlled company that handles the mines in the area ordered new pillars from its old supplier, Gerom International, last year.

For half a million euros, Gerom was to deliver new pillars and other safety equipment, but the firm went insolvent the same year the contract was signed. This year the state company organized a new tender. This time, the winner was a company called Gamiatricos, which agreed to deliver new pillars, some imported from Poland, for nearly €510,000.

But when the pillars arrived in September 2017, workers found that they would fall apart when they picked them up. Moreover, according to local investigative journalist Ramona Rosulescu, while the delivery papers said they had been imported from Poland, small stamps engraved on the pillars said they were produced locally.

Who could have pulled this off?

Rosulescu, who dived deep into the matter, thinks she knows.

Publicly available data shows that, from its founding in 1994 until 2006, Gerom had been owned by Aurelian Serafinceanu, the former prefect of the county where Lupeni and other mines are located.

Although the shareholders of the company have been secret since 2006, Rosulescu believes it still belongs to Serafinceanu, who she says is “a good friend of Gabriel Oprea, the former interior minister.

The pillars saga is not new in Romania’s mountainous Jiu Valley and its four coal mines.

In 2014, several miners told DIGI24, a national TV channel, that pillars were often taken out of the mines, repainted, and returned to the pits as if they were new. They also noted a general lack of safety equipment.

The management of the state company in charge of the mines denied the miners’ claims and accused DIGI24 of being sent by an opposition party.

Cizmasiu, who grew up in a family of miners and has been working in the mine since he was 18, saw this himself on that fatal day.

He first noticed little pieces of coal falling from the ceiling and one of the hydraulic pillars leaking close to the valve. He rushed to refill it with water and emulsion, but more coal started to fall and the other pillars gave in.

“Run!” he screamed at the other ten miners in the tunnel and started running himself. Eight made it out, but Cizmasiu and his two colleagues remained buried.

The word “colleagues” has a different meaning among miners. They’re more like comrades or brothers.

“If we were three and had one biscuit, we would split it into three small pieces,” he says, describing the closeness that develops hundreds of meters below surface. Iulian is gone, and among other things, bad pillars caused his death, Cizmasiu is convinced.

“If the pillars were good, it wouldn’t have been possible for such a large area to collapse,” he says.

Two months after the accident, a communique from Societatea Complexul Energetic Hunedoara SA, the state-owned mining company, remains plastered to the gate of the Lupeni mine. It says the CEOs want to assure miners that their safety is a priority.

Cizmasiu received 10,000 lei (€2,155) in financial aid from the government and 1,600 lei (€345) for his medical treatment, but what he and other miners really want is to be assured of their safety when they climb down.

“Everyone has children, we all have families. We all want life to end in a natural way, not like this.” he says.

The Energy Minister himself promised new pillars, but even if he keeps his word, it’s too late for Iulian. Never again will the two friends drink a cup of coffee together before work. Never again would they share their water and lunch down in the pit.

It was too late to share the little chocolate bar Cizmasiu found in his dying colleague’s backpack on that terrible day down in the mine. He ate it alone, and then used a box from Iulian’s respirator to dig his way towards his rescuers.

As it turns out, even in death, Iulian may have saved his life. “Something will be missing forever,” he says, remembering his friend.

There have been two more accidents in the mines of the Jiu Valley since October 5.