by Marine Martirosyan
Tweet this Share this on Facebook DONATE
Above: Armineh Baghdasaryan, her mother-in-law, and her children in front of their new home. Credit: Saro Baghdasaryan

When Armineh Baghdasaryan knocked on the door of the local social assistance office to apply for a poverty allowance, she already knew the rumors.

Apparently, Housik Yenokyan, the clerk in charge of approving the government allowances, was asking applicants for bribes before he would grant them assistance.

Armineh thought this was just village talk. “I didn’t believe them,” the 31-year-old mother of four said. “I couldn’t imagine having to pay someone to receive a social benefit you’re entitled to.”

When she finally stood in front of him, Yenokyan was clear and direct: He would approve her application for an amount equal three months of the benefit, a total of 112,500 drams (US$ 232).

“I was startled,” Armineh recalled.The desperate mother called her husband, 32 year-old Marat, and told him of the clerk’s request.

Life had been kicking the young family around for too long, exposing them to hardships over which they had no control.

They were poor when they fell in love at an animal farm in Arzini, northeast of Yerevan, where he worked as a livestock breeder and she milked cows.

Raphael, their eldest son, who is now five, was born there.

After two and a half years in Arzni, the couple moved to another village nearby to work for a Yazidi farmer. But that lasted only until November 2016, when the farmer emigrated to Europe and the two had to move on. They settled in another village to live in a bakery and take care of the owner’s animals in a barn next door.

Occasionally Marat cleaned barns in the neighborhood for the equivalent of just a few dollars. The monthly poverty allowance of 37,000 drams ($77) they requested from the state would have been the family’s only stable income.

The bribe was another hardship – but this time, it was one they had control over.

Armineh told Yenokyan, the clerk, that they would refuse to pay.

In response, he decreased his demanded price to two monthly allowances.

But again, Armineh’s answer was a steadfast no.

Soon Hetq, a local investigative reporting outlet,ran the story. And now it was Yenokyan who knocked on the family’s door to ask them to retract their claims and say that it had all been a misunderstanding.

That’s when he got his third “no.” With no poverty allowance, the family’s four children hadn’t eaten for days.

But the tables had already turned.

Yenokyan’s boss, Levon Poghosyan, the head of the Agency of Social Assistance, summoned Armineh to his office for a meeting. Afterwards he wrote a letter to Hetq, saying that she had told him that the article describing the bribe was inaccurate.

When contacted by reporters again, Armineh gave a completely different account of the meeting, to which she had taken her five-year-old son, Raphael.

She said Poghosyan had asked her denounce the article in writing, and that she had refused. He had yelled at her so much that Raphael got scared and burst into tears.

The police never managed to launch an effective investigation – though Hetq’s efforts to encourage them to do so did lead to a comical episode in which two officers lost their jobs.

The outlet’s editor-in-chief, Edik Baghdasaryan, who is not related to Armineh Baghdasaryan, posted a story about the demanded bribe on Facebook.

In his post, he tagged Ashot Aharonyan, a senior police official in Yerevan, to get his attention.

Instead, the editor was contacted by a police department near Armineh’s village - a level in the police hierarchy well below Aharonyan’s. The chief of the station and a colleague had a puzzling request:

Would the editor be so kind as to provide them with Aharonyan’s phone number? In effect, the officers were asking a journalist for their own superior’s contact information.

Baghdasaryan posted this odd request on his Facebook wall, again tagging Aharonyan. After that post, the local police chief and his colleague were fired, although the chief was reinstalled several months later.

But where the system had failed, common people have stepped in.

After reading the story, a reader launched a crowdfunding campaign that raised $3,000 and 105,000 drams ($217) – just enough for activists to buy the family a house and even to furnish it.

It is from that new warm home that Armineh is now urging Armenia’s poor to follow her example.

If officials turn out to be too powerful, she says, “contact journalists and the police.”

“There is no need for families like mine to ever bribe anyone,” the young woman appeals. “Resist!” 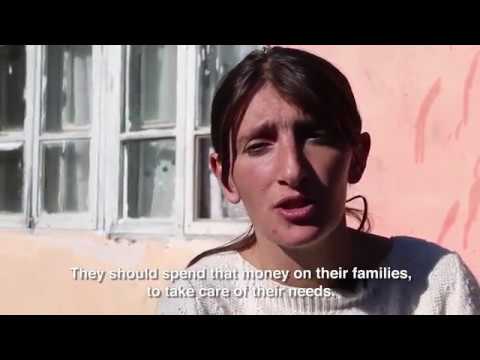