“Laundromat” is a name OCCRP has assigned to a particular type of financial device set up primarily in developing countries.

They are all-purpose financial tools that can be used as a cost-effective money laundering system, to move money offshore, to hide or obscure ownership of assets, to avoid taxes or customs fees, or to simplify or avoid local paperwork. In the worse cases, Laundromats can be used for financial fraud. A Laundromat is essentially a network of offshore companies with bank accounts. These companies (sometimes referred to as “technical companies”) exist only on paper — they have no offices, sell no products, and have no staff. And though they look independent, in reality they are the nodes of an interconnected system.

To protect the Laundromat’s real operators, the companies involved are formally owned and operated by proxies — people who don’t exist or who have no idea their names are being used. In some cases, their identities have been stolen. In others, they’ve agreed to sign the documents for money.

Let’s say a corrupt official has figured out how to steal money from a government agency. The Laundromat allows him to funnel it abroad and disguise its illicit origins.

The first step is wiring the funds into one of the Laundromat nodes. To make the transaction look legitimate, a fake invoice is usually created to justify it, such as a bill for computers.

The Laundromat node then splits the money up, combines it with other funds from other users, and wires it to other nodes in the network, again using fake trade deals to explain the transfers. This process may be repeated several times. Finally, the money is transferred from the last node back to the original user (minus a commission), usually into the user’s own offshore company in another country. Because the money can’t be traced, it can now be used for ordinary purchases or investments.

In Russia and other former Soviet republics, such systems were often set up in the 1990s and 2000s, and were used by legitimate businesses to bypass government regulations and customs duties. Most often it was used to move money offshore, to buy products or to buy assets abroad. These transactions were often not strictly legal but compliance standards were low compared with today, and enforcement of laws less rigorous.

Who sets up a Laundromat?

Previous Laundromats identified by OCCRP (the Russian and Azerbaijani Laundromats and the Proxy Platform) were set up by banks, frequently in the Baltics, or by organized criminal groups. OCCRP even uncovered some instructions written by Latvian banks on how to use the systems.

In the Troika Laundromat case, the system’s 76 known nodes were set up by employees of Troika Dialog, once Russia’s top private investment bank. (It was bought by Sberbank in 2012).

The proof? Troika companies made hundreds of payments to a company registration agent in Ireland.

Was this Laundromat set up by the management of Troika Dialog and its principal partner, Ruben Vardanyan?

We don’t know. Whether he knew of the scheme being run by his bank is not clear. There is no definitive evidence that he did.

Vardanyan says such arrangements were common practice at the time, that everything Troika did was legal, and that it didn’t behave substantially differently than other banks. He also said that, given Troika’s large size, he didn’t always know about all the deals the companies Troika created were engaged in. There is no evidence that he or Troika have ever been investigated by authorities for wrongdoing related to the Laundromat, and no charges are known to have been filed or contemplated.

It’s clear Troika employees operated the Laundromat, given that many of the fake transactions were initiated by emails sent from company addresses. Documents show Troika paid for the company nodes and set up the system.

Vardanyan interacted with some of the nodes in the system himself. For example, he received more than $3 million from Laundromat companies to pay his credit card and tuition for his children’s school. His signature was found on one document related to the Laundromat, in which he gives a loan to a company in the network.

Compliance standards at the time, and the dysfunction of the Russian economic system in the 1990s and 2000s, would have made it difficult for any businessman to follow all the rules and remain successful. Many corners were cut by many people..

Are the transactions in a Laundromat illegal?

This is a very complex question, and it’s up to prosecutors to determine whether any laws were broken. But which prosecutors, and which laws? The Troika Laundromat involved people in Russia wiring money to bank accounts in Lithuania operated by companies in (say) the British Virgin Islands. Each jurisdiction has its own definitions of money laundering and tax evasion which determine whether a crime may have occurred. In addition, though laws are national, many of these transactions were international.

The bank accounts themselves were often denominated in U.S. dollars, rubles, euros, or Swiss francs. Countries where these currency trades must be settled often take jurisdiction over such accounts. This means that a given transaction may come under Russian, American, EU, or Swiss jurisdictions. Because they used fake paperwork to cover the transactions, the Laundromat companies or nodes were most likely acting illegally in some or all jurisdictions.

However, in many cases, a Laundromat user may have been engaged in legitimate business, and simply found that using such a system was easier than more regular or official channels.

Prosecutors will need to look at these transactions, but they may find the the statute of limitations has expired.

What do we know about where the money went?

In some cases we know where the Laundromat money went: yachts, luxury cars, estates. But in many cases we don’t. The system’s users often had their own offshore companies, which are hard to trace. There is evidence other, previously discovered Laundromats may have also used the Troika Laundromat (for example, some Troika Laundromat companies sent or received money to nodes of the Azerbaijani Laundromat).

The very purpose of such systems is to obscure the ownership of money that goes through them. The fact that some of the money commingled with funds from other users also makes it more difficult to trace.

In some cases, reporters were able to track transfers with a high degree of confidence, and this is reflected in the stories.

What type of checks should the banks have done?

The bank accounts known to have been used in the Troika Laundromat and obtained by OCCRP and 15min.let were all at Ukio Bankas in Kaunas, Lithuania. We don’t know why Ukio was selected (Vardanyan said it was just one of about 20 banks that Troika Dialog worked with). What’s clear is that the bank had a dismal compliance record. In fact, it was shut down in 2013, in part because of its poor compliance history.

Bank compliance officers are supposed to examine transactions and decide if they appear suspicious. Many of the Troika Laundromat transactions were highly suspicious, and should have been flagged. For example, a given Laundromat company might be trading computers one moment and food the next. There was almost no evidence that these companies ever did any real business. It would have been easy to ask any of them for a utility bill, a rental contract, or any other supporting documentation that would prove they were more than mere shells. But there is no evidence that Ukio compliance officers ever did this.

AAt one point, prompted by a Western bank where Ukio had a correspondent account, a compliance officer at Ukio asked about a contract that had been signed and then cancelled. The contract stipulated that if one party reneged, it would have to pay hundreds of thousands of dollars in a cancellation fee. The compliance officer complained that he didn’t understand the deal, but was told by Troika Dialog that the contract is as it is. The compliance offer accepted this explanation and passed it on, ignoring the fact that this was the 16th consecutive cancelled contract between these parties. That fact alone should have qualified as suspicious.

What’s wrong with rich people moving money around this way? Who does it hurt?

Laundromats are problematic for many reasons.

First, some elements are likely illegal and have been used to evade taxes, hide assets, and launder money.

When users evade taxes or customs fees, the state is deprived of badly needed money — especially when the Laundromat users are people who are most able to afford them. Why should rich and well-connected people who can afford the services of an investment bank benefit when an average businessman cannot?

The situation also creates an unfair playing field, making the goods and services of corrupt operators cheaper than those of good businesspeople who responsibly pay their taxes and customs fees.

When a Laundromat hides ownership of assets, the effects depend on why. There are legitimate reasons do so. In countries like Russia, showing legitimate wealth can get you in trouble with greedy people in positions of power. Corporate raids are still a regular occurance. Your family could be kidnapped. So it makes sense to hide what you own, either offshore or locally.

On the other hand, some people try to hide assets they’ve purchased with stolen funds. One way investigative journalists or police can catch corrupt officials is by looking at what they own and comparing it to their legal incomes. If these assets are successfully hidden, the public may never know there’s a problem.

In the most blatant cases, Laundromats help launder ill-gotten money — literally making crime pay. These funds can disappear into offshore accounts and never be found. Almost every developing country struggles to trace and recover stolen assets. When Russia’s leaders fall — and some day some of them will — local authorities will almost certainly go after what’s been stolen from them. Those assets will be much harder to track down when there’s a convenient system to help hide assets.

Opaque money is also opaque power. Money that has passed through the Laundromat may show up in other countries to bribe local officials, buy positive news coverage, or empower extremist groups. It’s best to know whose money is whose.

Click below to hear Louise Shelley, director and founder of George Mason University’s Terrorism, Transnational Crime, and Corruption Center and author of the book “Dark Commerce,” talk further about the corrosive influence of dark money. 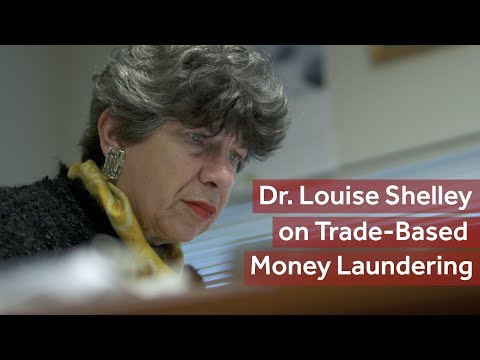