The hang glider pilot insisted it was a routine flight, and that strong winds had blown him over the border from Hungary into Ukraine. But the man arrested by Ukrainian authorities last July, with his flight suit and night-vision gear, looked suspiciously like other hang-gliding smugglers along the border — smugglers who take off from Ukraine, fly into Hungary, and each drop as much as 100 cartons of contraband cigarettes.

Ukraine is home to some of the world’s cheapest cigarettes — at $1.05 per pack — making the country a bonanza for smugglers, whether by glider or more mundane pathways on the ground. Cars and trucks filled with Ukrainian-made Marlboros and Viceroys get waved through border checkpoints by customs guards who seem more than eager to accommodate, for a price. Loads also move by bus and train, bound for other European countries where high taxes make packs cost as much as $5 (Germany) or $10 (United Kingdom).

The backbone of this underground commerce — the acquisition of the cigarettes themselves — is by far the easiest part of the entire operation. The world’s four leading multinational tobacco companies, Philip Morris International, Japan Tobacco International (JTI), Imperial Tobacco, and British American Tobacco (BAT), have produced billions of excess cigarettes in Ukraine, fueling a teeming black market that reaches across the European Union. Today, Ukraine is rivaled only by Russia as the top source of non-counterfeit brand cigarettes smuggled to Europe, EU officials say. 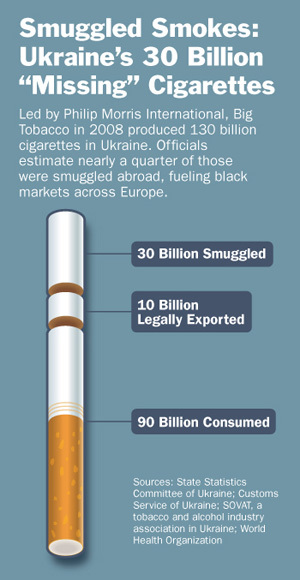 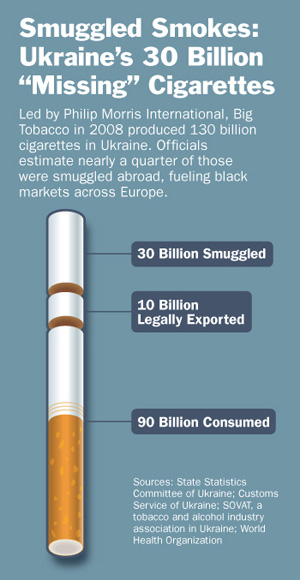 The numbers tell the story. Each year, Ukraine’s cigarette consumption and legal exports top 100 billion sticks, according to Ukraine’s Ministry of Health. Yet in 2008, tobacco companies manufactured and imported nearly 130 billion cigarettes — 30 percent in excess of what the local market can consume. These “extra” cigarettes disappear in the market, feeding an illicit trade that is worth, conservatively, $2.1 billion annually. Ukrainian cigarette production, meanwhile, has steadily risen since 2003, according to an analysis by ICIJ of data compiled by SOVAT, a tobacco and alcohol industry association, and Ukraine government statistics. In fact, cigarette production in Ukraine increased one-third between 2003 and 2008 — from 96.8 to 129.8 billion — with JTI and Philip Morris leading that trend.

What happens to those 30 billion “lost cigarettes”? The huge surplus has reached such proportions that it has become a parallel industry, experts say, with all sides benefiting from it, from manufacturers to organized crime gangs who control the black market. In addition, hundreds of thousands of Ukrainians, Romanians, Hungarians, and Poles along the border rely on the trafficking of cigarettes for their livelihood, buying the cheap smokes in Ukraine and unloading them tax-free in European countries where prices are far higher.

Distribution of smuggled “discount cigarettes” with Ukrainian excise stamps is also flourishing on the Internet through numerous Moldova-based online stores, which deliver them to customers worldwide.

“Tobacco companies are benefiting from selling to smugglers,” says Kostyantyn Krasovsky, head of the tobacco control unit of the Institute of Strategic Research at Ukraine’s Ministry of Health. “They sell it to them at the same prices they sell to legal wholesalers.” Krasovsky adds that in dealing with smugglers, tobacco companies can potentially gain extra profits when a batch is confiscated by customs and destroyed. “It’s even better for them; another smuggler will come and buy the same quantity.”

Even after recent hikes, cigarette taxes in Ukraine remain among the lowest in Europe. The low price of Ukrainian cigarettes means high profits for smugglers, who have pushed the product all over Europe. Enforcement is lax at best; most big seizures of smuggled Ukrainian smokes take place not in Ukraine but in neighboring Romania, Poland, and Hungary. 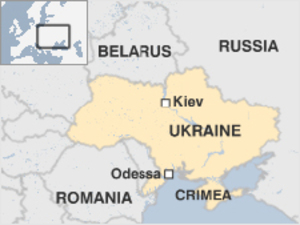 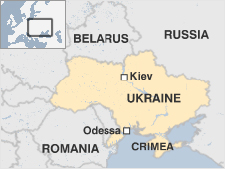 “The former Soviet Union, particularly the most populous countries such as Russia and Ukraine, represented a massive opportunity for the tobacco companies. Men were already smoking in large numbers but the companies knew they could push many more women to smoke, and they did,” said Dr. Anna Gilmore, a senior public health researcher at the University of Bath, in the UK, who has written extensively about the tobacco industry in the former Soviet Union. “As a result, Eastern Europe is now one of only two regions in the world where both numbers of cigarettes sold and profits are increasing (the other region is Asia), and this makes it extremely important to the industry.”

The Tobacco Atlas, published by the American Cancer Society and the World Lung Foundation, identifies Ukraine as one of the countries with the highest annual rates of cigarette consumption per person in the world: 2,526 cigarettes.

The tobacco companies, for the most part, acknowledge that they are churning out more cigarettes than the local market can absorb, but they say they sell only to licensed distributors and periodically reduce the output of certain brands that are popular among smugglers. Beyond, that, they claim, it’s up to law enforcement to prevent smuggling. “Objectively, we know that our brands produced in Ukraine are found in Europe,” said Dmytro Redko, JTI’s director of corporate affairs in Ukraine. “We do our best to prevent such shipments, although we can’t halt them completely. That is the function of the [Ukraine] government.”

JTI, which is owned in part by the Japanese government, manufactures some of the brands that smugglers cherish the most, including Ronson. Redko says his company is constantly decreasing production of Ronson, though he would not disclose the exact figures of this brand’s output. In 2008, JTI manufactured roughly 37 billion cigarettes in Ukraine, roughly 30 percent of the nation’s total production. According to Redko, when JTI bought British manufacturer Gallaher in 2007, it also inherited what he called Gallaher’s “outflow” issue — smuggled cigarettes — and the company has since tried to correct it.

BAT also has had its share of troubles in Ukraine despite the fact that the company’s output in Ukraine has declined 30 percent since 2003. In a 2007 corporate report the company acknowledged that it had to cease production of its Pall Mall brand in the country after an audit showed that “local production was not proportionate to local demand,” and cigarettes were widely being smuggled to Germany. BAT stated in the report that the company’s actions helped reduce the smuggling of its products from Ukraine by 3 billion cigarettes in 2005 and 2006. “It is our belief that if all manufacturers took this approach, outflows from Ukraine could be significantly reduced,” BAT’s chief of anti-illicit trade, Pat Heneghan, told ICIJ in an e-mail. 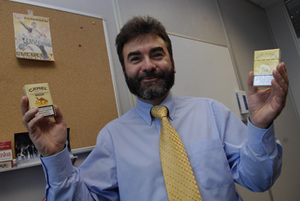 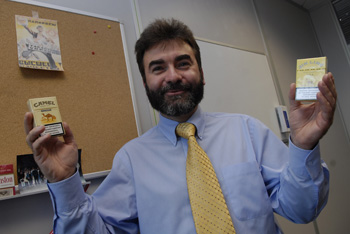 Philip Morris, maker of Marlboro, is the top producer of cigarettes in the Ukraine, with 44 billion sticks manufactured in 2008 — an increase in production of more than 85 percent since 2003. Marlboro, EU officials say, remains the number one brand seized in Europe. Ukrainian law enforcement officials say that Philip Morris’ brand L&M is routinely seized at the border. Philip Morris International’s director of brand integrity, Andrew Robinson, told ICIJ that the country does indeed have “an ongoing problem of diversion of genuine products from Ukraine into the EU,” but, he stressed, the company’s production is commensurate with demand. Robinson added that Philip Morris has implemented a sophisticated system of product tracking and tracing in Ukraine, and that it actively cooperates with law enforcement to prevent smuggling.

Imperial Tobacco officials declined to comment for this story. In 2008, Imperial manufactured more than 30 billion cigarettes in Ukraine, according to industry and government statistics, the third largest production after that of Philip Morris and JTI.

The big tobacco multinationals in Ukraine are not strangers to the smuggling business — in the 1990s the firms colluded with criminal networks to smuggle cigarettes and gain market share around the world. Since 2004, Philip Morris and JTI have settled lawsuits brought by the EU and publicly committed to fight smuggling. The agreements require both companies to make substantial payments to the member states every time their brands are seized.

Experts say, however, that only a tiny portion of all contraband cigarettes are caught by Ukrainian customs. In 2008, customs officials seized about 66 million cigarettes — less than one percent of what they believe was smuggled out of the country.

Then there’s the problem of corruption. Several of the more than 120 criminal smuggling cases prosecuted in 2008 in the picturesque region of Chernivtsi, on the border with Romania, involve customs agents who aided the smugglers, Ukrainian police say. In just the first two months of this year, three cases have been prosecuted in Chernivtsi in which customs officials “overlooked” the smuggling of 10.3 million cigarettes — more than half of them JTI’s Ronsons.

Tobacco companies say they monitor their wholesalers for suspiciously large sales of cigarettes. Smugglers, in turn, have started to split large purchases into many smaller purchases to avoid detection. “We don’t know really who is buying from the wholesalers, as these are small batches” said JTI’s Redko. 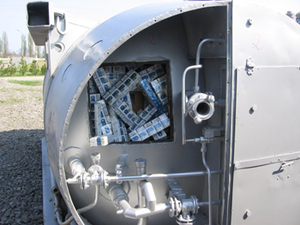 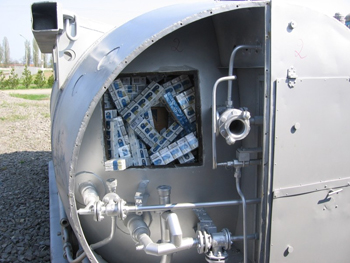 Krasovsky, of the Ministry of Health, says tobacco companies are doing little to stop smuggling. By checking the seized packs’ production dates, he said, manufacturers could monitor where cigarettes have been bought and cut off wholesalers who deal regularly with smugglers. Instead, he adds, “tobacco companies supply cigarettes to a wholesaler that has a huge warehouse in the border with Poland — it’s obvious where those cigarettes are going to go.”

Internet merchants are also making a windfall from Ukraine-made cigarettes. A Web search for “cheap Ukrainian cigarettes” yields about two dozen online stores, most of them located in neighboring Moldova. The sites offer all the well-known brands, from Marlboro to Winston, with Ukrainian tax stamps and health warnings. The price is $22 for a carton (10 packs) of Marlboro — about three times cheaper than prices in the EU. The sellers claim that they will skip customs inspections at the destination country. If customs does try to charge a duty tax, customers are advised to reject the package and ask for their money back. Also plentiful on Ukrainian Internet sites are classified ads offering Ukrainian cigarettes delivered to the EU “in large quantities,” “on constant basis” and “without any paperwork.”

One such ad, posted on January 9, 2009, offered delivery of cigarettes from Ukraine to Europe. In response to an online inquiry, a person who introduced himself as Oleh Dmytruk responded by saying that delivery of red Marlboro can be made to Germany at 18 Euros (about US$25) per carton. The minimum purchase: 1,000 cartons.

In Krasovsky’s view, the only way to halt smuggling is to make the trade unprofitable for manufacturers. He and other tobacco control advocates propose that, much like in the Philip Morris-EU agreement, tobacco companies in Ukraine be forced to buy back their seized cigarettes at market prices.

But the economics of smuggling may be too sweet for at least some tobacco companies to stop. Asked whether the tobacco industry loses money to the illicit trade in Ukraine, JTI’s Redko responded candidly: “What do you mean by loss? From the point of view of a company operating on the market, production of extra goods means extra profits.”

Vlad Lavrov is a business editor with Ukraine’s weekly newsmagazine Korrespondent. Previously, he served as business editor at the Ukrainian weekly Novynar and as a reporter for Ukraine’s English-language weekly, Kyiv Post.