The Central Bank of Montenegro cited “improper reporting” as reason for a special audit of the troubled First Bank, which is controlled by the family of Prime Minister Milo Đukanović. By The Center for Investigative Reporting

The Central Bank of Montenegro is taking the unusual step of assigning a special auditor to begin looking next month into the workings of the country’s second largest bank, The First Bank, which is controlled by Prime Minister Milo Đukanović, his relatives and a close friend.

Central Bank officials say the step has been prompted by “improper reporting.” First Bank neglected to complete a required audit on its 2008 operations on time, and in a departure from the Law on Banks, it commissioned auditors without Central Bank approval.

First Bank officials through a spokeswoman declined repeated requests for an interview with reporters for the Center for Investigative Reporting in Sarajevo (CIN). In a July 28 email spokeswoman Tanja Kaženegra said bank policy is not to “take part in any kind of pieces that are first of all based on political orientation, family rates and relations, business reports of its shareholders, or deposit owners, or credit users, or any other clients of Bank.”

The e-mail also said that most questions about the Central Bank action had been answered already when bank CEO Andrew Obolensky was interviewed by the Montenegrin daily newspaper Vijesti.

In that July 27 interview, Obolensky said “that is a weird move, because we have already found a well established audit company, PricewaterhouseCoopers, to do that job.” PwC is one of the world’s largest accounting and professional services firms with 150,000 employees in 153 countries.

“It seems that they like to conduct checks and audits,” Obolensky said. “Central Bank of Montenegro has forbidden us to approve new loans and I believe this audit will be the final step toward the approval of credit financing. We are waiting for their explanation.”

According to a Central Bank press release dated July 26, the First Bank incorrectly hired the auditing firm and only afterward requested approval.

According to Montenegrin law, banks that commission auditors without Central Bank’s approval can be fined from 50 to 300 times the amount of the minimum monthly salary in Montenegro. Statistical Office of Montenegro said there is no formula to calculate minimum salary. The country’s Chamber of Economy calculates the price of labor at €55 or €57 a month which is used as a starting point to calculate salary.

First Bank began as Nikšić Bank, a small institution in the industrial city of Nikšić. Aco Đukanović, the brother of the prime minister, bought 30 percent of shares put on sale in 2006. Milo Đukanović had earlier, as head of the privatization council, set tender rules for acquiring the bank. The acquisition by Aco Đukanović, in addition to 12 percent he already owned, put him in position to appoint four of the seven members of the board and effectively take control of bank operations.

New board members included a theater and marketing professional, a diplomat, a manager, and the owner of individual companies with close ties to Milo Đukanović and his Democratic Party of Socialists (DPS). Appointing people “with little or no banking experience and knowledge” was the first of several shareholders mistakes which, according to a new study by the Montenegrin non-governmental organization Institute Alternativa, led to bank’s collapse. CIN reporters acquired a copy of the study.

The institute that conducted the study was founded in 2007 to contribute to human rights protection and development of democracy and rule of law in Montenegro. The work, analyzing the First Bank crisis and the Central Bank’s failure to prevent it., was written by Mila Kasalica, who has experience in banking and was finance director of the Open Society Institute.

The name of the bank under the new board was changed to First Bank and a new aggressive marketing campaign promising easy loan terms was launched to attract new depositors. In 2007, through a recapitalization, the rest of the Đukanović family – the prime minister and his sister Ana Kolarević, together with some close friends, acquired shares in the bank.

As deposits grew, so did the loans the bank issued. By the end of 2007, the bank had issued nearly €409 million in loans, according to a 2007 auditor’s report, or about 97 percent of its deposits.

The institute study concludes that, “A number of chosen companies received huge loans which were not supported by adequate risk assessments and evaluation of business and development capacities of those companies. In granting credit lines the prudent control’s rules were full disregarded.”

In addition, some loans were, according to a 2007 auditor report, given to people connected with the bank. For example, in 2007, Aco Đukanović borrowed more than €1.6 million, Vuk Rajković, Milo Đukanović’s tourism business partner, €625,000, Goran Rakočević, DPS official and advisor, €300,000.

Stanko Subotić, a friend of Đukanović now in hiding and under indictment in Serbia on charges of tobacco smuggling, took out a loan to buy €20 million of land on St. Nikola Island, a resort property in 2007.

Granting loans to connected parties “automatically meant that those were high risk placements,” Institute Alternative wrote in its study.

Eventually, even the bank’s own reports point to inadequate handling of the bank’s fast growth, poor risk management systems, many unpaid loans, including Subotić’s, and huge withdrawal by depositors as the economic crisis deepened led to problems with liquidity. The bank began to have trouble handling transfers.

Obolensky, in his Vijesti interview, said the “bank was growing too quickly; we were too big…(and then) the crisis came.” He said the bank had no time to reorganize as fast growth requires.

By the end of 2008, the bank which for years had reported high profits ended up with €24 million loss. 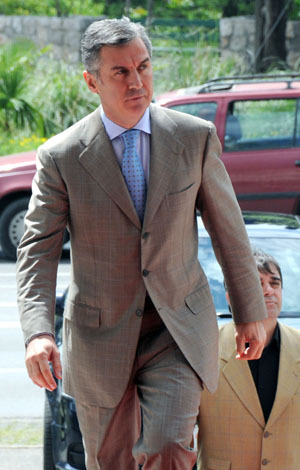 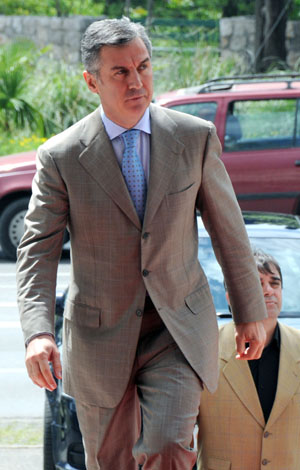 Credit: Montenegrin newspaper Vijesti Prime Minister Milo Đukanović of Montenegro has a personal stake in the bank his government bailed out.

In October 2008, when there were newspaper reports about bank liquidity problems, the Montenegrin parliament passed a Law on Measures for the Protection of the Banking System. The Law proposed by Đukanović’s government enabled the government to “make a prepayment of the total debt that the State has towards the banks, including loans for which the government gave guarantees” as well as to “provide credit support to a bank in need of additional funds for liquidity.” The amount of these loans was not to exceed nominal value of shares.

Two months later, in December, Đukanović’s government announced that, due to the international financial crisis, the government would bail out First Bank, which was the only bank in the country to actually ask for government assistance.

Just weeks before that announcement, Aco Đukanović and Elektroprivreda recapitalized the bank raising its capital by €20 million. According to the Institute Alternative’s study the transaction was completed without Central Bank’s approval and “is highly likely that a swap of debts to capital was organized.” The approval of the transaction came from the Montenegrin Securities Commission, which is not responsible for the banking business.

With nearly €47 million worth of nominal shares after the recapitalization the bank qualified for a €44 million government loan. In addition, Đukanović’s government paid off €14.4 million worth of debt to Montenegrin Railways and projects involving four other companies.

Despite the government assistance, the bank lost another €2.9 million between January and March and €894,000 between April and June, the bank’s financial reports show.

Obolensky addressed that issue, as well, in his interview with Vijesti: “Government support was relatively modest and useful for the bank, but not sufficient. I’m not sure if people here understand what governments in other countries are doing for their banks. The amount of support is in billions.”

With the government loan, new bank management was appointed. In January, the Montenegrin Supreme Prosecutor announced that the previous bank management was under investigation by the Organized Crime, Corruption, Terrorism and War Crimes Department because of a Central Bank finding that there was reason to suspect that “responsible people in this bank, with their illegal actions, have jeopardized the right of banks’ depositors and creditors.”

Finance Ministry officials told CIN that the bank has repaid €22 million of the bailout loan. The rest and interest is expected to be repaid by end of the year.