The illicit trafficking of tobacco is a multibillion-dollar business today, fueling organized crime and corruption, robbing governments of needed tax money, and spurring addiction to a deadly product. So profitable is the trade that tobacco is the world’s most widely smuggled legal substance. This booming business now stretches from counterfeiters in China and renegade factories in Russia to Indian reservations in New York and warlords in Pakistan and North Africa.

The illicit trafficking of tobacco is a multibillion-dollar business today, fueling organized crime and corruption, robbing governments of needed tax money, and spurring addiction to a deadly product. So profitable is the trade that tobacco is the world’s most widely smuggled legal substance. This booming business now stretches from counterfeiters in China and renegade factories in Russia to Indian reservations in New York and warlords in Pakistan and North Africa.

It began with a basic mathematical equation: In 1995 two scholars in Europe found that almost one-third of the world’s cigarette exports had simply vanished. Somehow, billions of cigarettes, once exported, had mysteriously gotten lost in transit.

Only it wasn’t that mysterious. Starting in 1999, a team of reporters from the International Consortium of Investigative Journalists pored over thousands of internal industry documents and uncovered how leading tobacco companies were colluding with criminal networks to divert cigarettes to the world’s black markets. Big Tobacco was doing it for profit — to boost sales and gain market share — as it avoided billions of dollars in taxes while recruiting growing numbers of smokers around the globe. The tobacco industry, as it turned out, did not merely turn a blind eye to the smuggling — it managed the trade at the highest corporate levels. 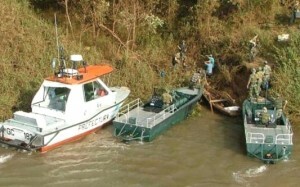 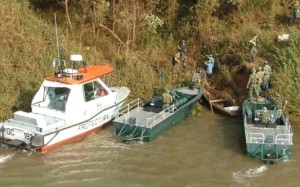 Those revelations, and others that followed, helped lead to government inquiries, lawsuits, and promises of a global treaty to crack down on the illicit cigarette trade. Since 2004, two major tobacco companies, Philip Morris International and Japan Tobacco International, have agreed to pay a combined $1.65 billion to the European Community and 10 member states to settle litigation that would have further exposed their involvement in cigarette smuggling. They have also committed publicly to help fight trafficking in tobacco. Similarly, this July, Canada’s two largest cigarette companies, Imperial Tobacco Canada and Rothmans Inc., pleaded guilty to aiding fsmuggling during the early 1990s; they are to pay a combined $1.12 billion, the largest such penalties ever levied in Canada.

Yet, despite the exposés, the lawsuits, and the settlements, the massive trade in contraband tobacco continues unabated. Indeed, with profits rivaling those of narcotics, and relatively light penalties, the business is fast reinventing itself. Once dominated by Western multinational companies, cigarette smuggling has expanded with new players, new routes, and new techniques. Today, this underground industry ranges from Chinese counterfeiters that mimic Marlboro holograms to perfection, to Russian-owned factories that mass produce brands made exclusively to be smuggled into Western Europe. In Canada, the involvement of an array of criminal gangs and Indian tribes pushed seizures of contraband tobacco up 16-fold between 2001 and 2006. “The big companies know that to some extent the golden period of smuggling is gone,” observes Belgium-based sociologist Luk Joossens, a World Health Organization expert on tobacco smuggling and co-author of the 1995 study that first alerted the world that billions of exported cigarettes had gotten lost in transit. “You have still the normal small-scale smuggling, but you also have counterfeit production, illicit manufacturing. . . and a lot of small companies that are involved. So the whole area of illicit trade has become much more complex.” Joossens also said that while Big Tobacco’s participation in cigarette smuggling in Western Europe and North America has largely been curtailed, the situation remains murky in Africa and other developing areas of the world.

This week smuggling experts, customs officials, and diplomats from nearly 160 countries are gathering in Geneva, Switzerland, to push for what has eluded governments for decades: a global crackdown on the black market in tobacco. Under the auspices of the WHO’s three-year-old Framework Convention on Tobacco Control — a global treaty to curb tobacco use — delegates will work on implementing a protocol to stop cigarette smuggling. But the proposed measures face plenty of challenges. Some countries, such as Japan, have slowed negotiations on smuggling. Meanwhile, several other countries, including the United States, have so far refused to ratify the FCTC altogether.

The stakes are formidable. Experts estimate that contraband accounts for 11 percent of all cigarette sales, or about 600 billion sticks annually. The cost to governments worldwide is massive: a whopping $40 billion to $50 billion in lost tax revenue during 2006. Ironically, it is those very taxes — slapped on packs to discourage smoking — that may help fuel the smuggling, along with lax enforcement and heavy supply. (A pack of a leading Western brand that costs little more than $1 in a low-duty country like Ukraine can sell for up to $10 in the U.K.) That potential profit offers a strong incentive to smugglers.

But it is more than lost revenue that is at risk. Illicit tobacco feeds an underground economy that supports many of the most violent actors on the world stage. Organized crime syndicates and terrorist groups such as the Taliban and Hezbollah facilitate global distribution and use the profits to finance their activities. In Canada alone, police believe that 105 organized crime groups are engaged in the illicit tobacco trade, including motorcycle gangs and the Italian Mafia. Criminal organizations “are doing more than just smuggling cigarettes,” notes John W. Colledge, who oversaw international tobacco smuggling programs at the U.S. Customs Service between 1999 and 2002. “They are engaged in human, drugs, and weapons trafficking.”

Perhaps even more troubling is the impact that smuggling has on the public health crisis caused by tobacco. Worldwide, one out of 10 adults dies prematurely from tobacco-related diseases such as lung cancer, emphysema, cardiovascular disease, and stroke. If current trends hold, tobacco will kill about 500 million people currently alive. By 2030, that figure will reach 8 million deaths a year, and with cigarettes being heavily marketed in poorer countries, 80 percent of those deaths will be in the developing world. Over the 21st century, say health experts, an estimated one billion people could die from tobacco use. 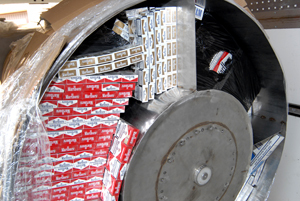 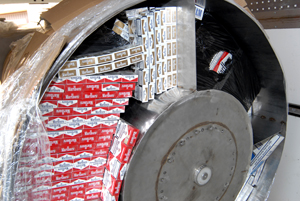 At a time when nations are increasingly trying to crack down on smoking, smugglers put cheap cigarettes into the hands of those most vulnerable — young people and the poor. In addition, the trade is pushing the supply steadily into the black market, selling cut-rate cigarettes of often dubious quality. Of special concern is the advent of a massive counterfeiting industry. Once a minor problem, today underground factories in China, Paraguay, and Eastern Europe manufacture literally billions of fake cigarettes — Marlboros, Camels, 555’s, Mild Sevens — an uncontrolled industry that law enforcement is only beginning to grapple with. Many of the smokes are made from the lowest quality tobacco, full of stem and sawdust, and spiked with unusually high levels of nicotine. Other packs contain far worse. Tests reveal that counterfeit cigarettes carry a bevy of products that could further shorten even a heavy smoker’s life: metals such as cadmium, pesticides, arsenic, rat poison, and human feces.

Despite the stakes, cigarette smuggling remains a tough crime to investigate and prosecute. Factories are set up in regions of the world with weak controls and high levels of corruption, such as the crime-ridden Russian exclave of Kaliningrad, Guangdong province in China, and South America’s notorious Tri-border area between Argentina, Brazil, and Paraguay. The distribution systems are complex, the smuggling routes circuitous and hard to track.

Smugglers take advantage of an “in transit” system used in free trade zones and other shipping centers, which allows for temporary tax suspension while the tobacco is en route to a third country. As a result of lax controls, cigarettes get “lost” along the way, with huge numbers failing to arrive at their intended destination. Cigarettes, for example, may sit for weeks in free trade zones in Panama or Dubai until they are sold. Then they pass quickly through multiple buyers in a short period of time, complicating efforts to identify where “leakages” occur. On occasion, cigarettes are even illegally sold at sea, where vessels offload them to smaller boats that take them to shore. In the Balkans, they are sold by the trunk-load to smugglers who line their cars up at the borders of the European Union. And in the United States, tobacco suppliers ship millions of the tax-free smokes to Indian reservations, where they are unloaded to smugglers, bootleggers, and online merchants.

Despite its broad impact on health, crime, and taxes, tobacco smuggling receives strikingly little attention from authorities. Lenient sentences are the norm; in some countries, cigarette smuggling is not even considered a crime. Nor is it a priority for law enforcement agencies, even in the West, which spend the majority of their resources tackling drug, arms, and terrorism cases. In the United States, for example, the Bureau of Alcohol, Tobacco, Firearms and Explosives devotes a paltry 2 percent of its personnel and budget to tobacco programs.

Eight years after its original series on tobacco smuggling, ICIJ has assembled a new team of reporters to illuminate this shadowy transnational business. Based on reporting from 15 countries, our new project looks at the influence of organized crime and terrorist groups, as well as the continued complicity of distributors, wholesalers, and tobacco companies themselves. Here, then, is our first series of articles and an interactive website that serve as the entry point to the team’s investigative work. Among our initial findings: 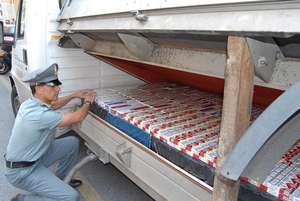 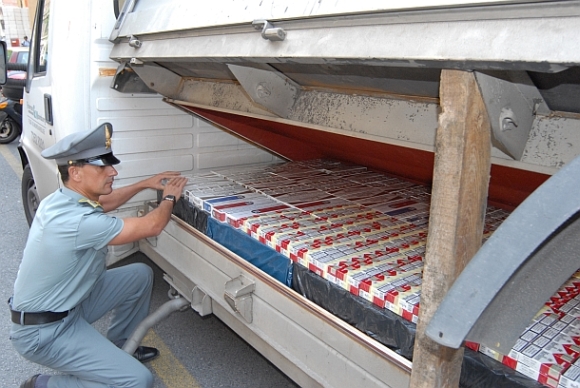 In the coming months, ICIJ will continue to unfold its investigation into tobacco trafficking. Look for new stories from the front lines of this ever-shifting trade, from the underground factories of China and America’s Indian reservations to the lawless border lands of northwest Pakistan and southeast Paraguay. In all of this, we will be looking for accountability — who is responsible for the growing trade in illicit tobacco, whether criminal godfathers, terrorist chiefs, shady distributors, or corporate executives.