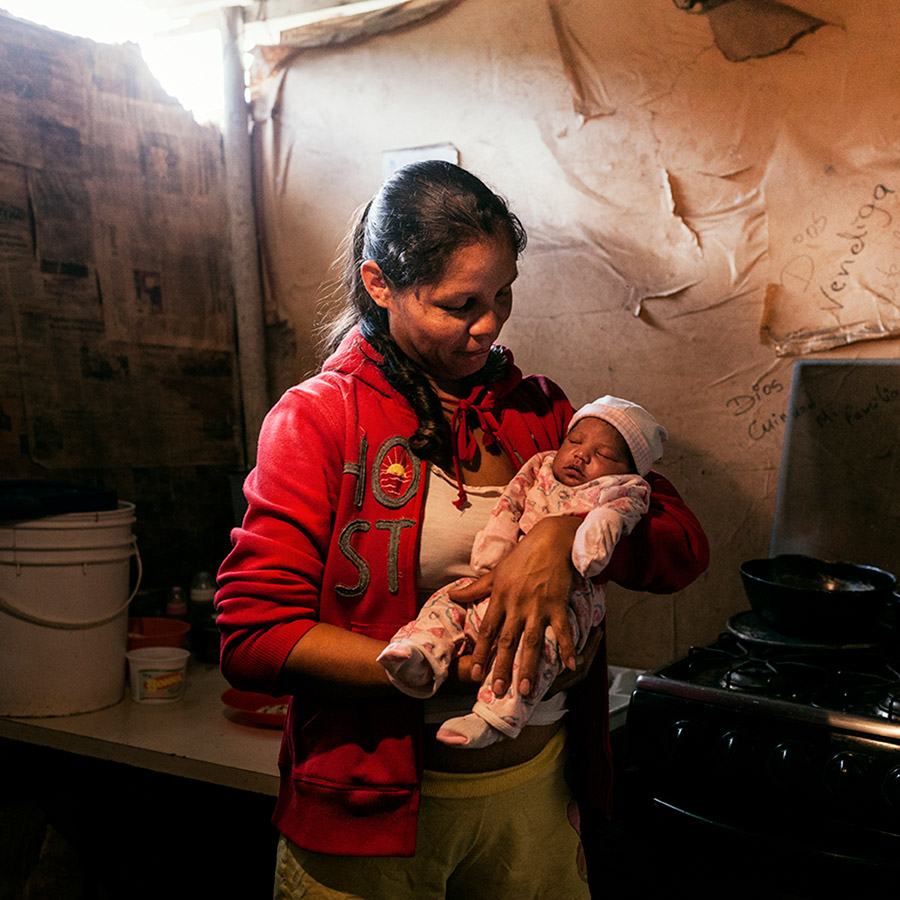 The Pain Comes after Giving Birth

Zuleima Perez’s home is up 149 very steep steps. It’s a hut made of wood and zinc sheets built on the slope of a hill in the shantytown of Negro Primero, on the southeastern edge of Venezuela’s capital of Caracas.

The house has only one room, 20 square meters with a crack down the middle of the floor. Zuleima, her husband and three children share the crowded conditions. Alexa, the youngest, was only 14 months old when reporters visited last November.

The overcrowding will soon get worse because Zuleima, 34, is about to give birth to her sixth child. She doesn’t know where this will happen, because staff at the Hugo Chavez Maternal and Children’s Hospital, where Zuleima went for prenatal care consultations, told her that they didn’t have enough resources for the delivery. They asked her to find another hospital by herself.

In a blackened pan sit the remains of the black beans they have eaten for two days. On the table lies a kilo of corn flour. In the refrigerator is a single apple with a slice missing, three onions, a bunch of spring onions, one tomato, one pepper and one cucumber.

In the refrigerator door is some milk, oatmeal and fororo (a type of millet flour). The door is rusty and must be opened carefully.

Before black beans, Zuleima’s whole family including her youngest children lived on Yucca and taro root with butter. When there isn’t enough to go round, Zuleima doesn’t eat despite her impending delivery. The family used to get assistance in the form of CLAP bags but they haven’t seen one in two months. Even when they got them, they only covered food for eight days for a family of seven.

Credit: Adriana Fernandez Loureiro / Efecto Cocuyo The family lives in a zinc hut on a hill in Negro Primero, south of Caracas.

Prenatal care is worse. Zuleima hasn’t received any vitamins — just a one-off packet of calcium pills — because the hospitals are short of supplies. She could buy them herself but they are expensive.

“I had a fever recently and I had to buy Atamel (acetaminophen), 500 bolivars each pill,” she said.

Zuleima says there are no resources at Hugo Chavez Hospital to run the tests she requires for her pregnancy. “They say they don’t have chemicals.” So she had to pay for the tests elsewhere, 115,000 bolivars, or more than half the family’s weekly income from her husband’s part-time work driving a borrowed truck.

Zuleima gave birth on Nov. 13, her birthday. Her baby’s name is Ambar, she weighed 3 kilos and was 50 centimeters tall. That same day Zuleima applied for sterilization; she realized six children are too many. Being a good “paridora” (someone who gives birth easily) is not a source of joy, she says, because she and her family are barely surviving in extreme poverty.

“When they checked, I had dilated 6 centimeters. I was giving birth and I hadn’t noticed, because I never have labor pain,” she says.

She received good care and the essentials (a disposable gown, hat, and shoes for the delivery room). Zuleima entered the delivery room at 11:20 and became a mother for the sixth time at 12:08. She stayed at the hospital for three days hoping to be sterilized.

But that never happened. Hospital staff had prioritized other surgeries, so asked her to come back in 40 days when they might have the intrauterine device available.

Credit: Adriana Fernandez Loureiro / Efecto Cocuyo Zuleima wants to be sterilized, but has not been able to undergo the procedure due to the collapse of Venezuela’s healthcare system.

Zuleima admits she never had any guidance for family planning, beyond her neighbor’s pragmatic advice: “You shouldn’t have any more children, you don’t even have any food to feed them.”

Zuleima has only 10 cloth diapers for the newborn, a gift from a relative who works at another hospital. She will use them as many times as possible, although they wear out quickly, hanging in the sun at the hut’s doorway. She bought two other disposable diapers for 7,500 bolivars each.

She will have to breastfeed Ambar and Alexa (her then 14 month-old-daughter), because she can’t afford to buy formula.

“The refrigerator is broken now, but still we have nothing to put inside, we are just eating arepas with no filling, nothing more,” she says with resignation.