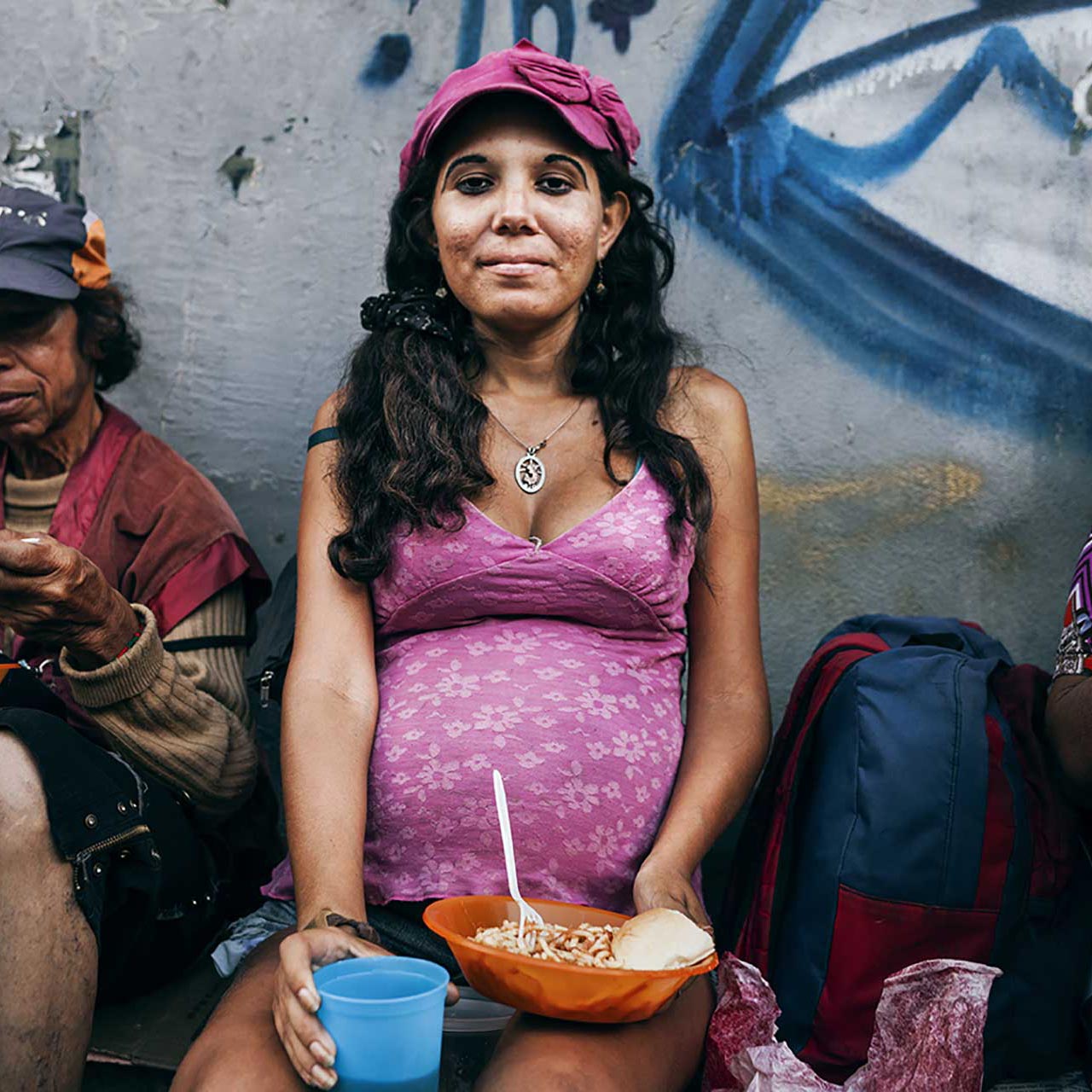 On the Streets for All to See

She is fourteenth in the line of women who sit, waiting, on a sidewalk. She stands out due to her pink hat and her eyebrows; black, painted lines that almost reach her cheekbones.

She is wearing shorts and a pair of sandals; her legs are skinny, her feet are dirty.

Three hours ago, she says, she left the shack where she lives in Caucaguita (almost 22 kilometers away) to take her place in the line that will ensure a plate of pasta, a piece of bread and half a glass of tea.

She is one of the 200 people that come every Sunday to Sabana Grande Boulevard to get food from the Jesus Camino Truth and Life Foundation. Her name is Yoanna Flores, and she is 24 years old and eight-months pregnant.

“I am here because I am starving to death,” she says.

Yoanna is a first-time mother. She has already chosen a name for her daughter: Ana Lucia. The last time she went to prenatal care consultations at the Concepcion Palacios Maternity ward in Venezuela’s capital of Caracas, they told her the baby weighs just 1.3 kilograms. “Yes, my belly is small, but everything is fine. He may weigh at least two and a half kilos,” she says.

She has no complaints about the prenatal care she has received in one of Venezuela’s main maternity hospitals, despite the fact that the hospital’s pharmacy doesn’t have the medicines and supplements she was prescribed.

“The doctors always give me a prescription, they prescribe iron, calcium and folic acid. And then I go to the pharmacy at the hospital, and they don’t have any. Same thing with the tests. …. I currently have a urine infection. They prescribed antibiotics, amoxicillin, but it can’t be found anywhere. And if there was any, I wouldn’t be able to afford it.”

When reporters ask Yoanna if she is aware of the government’s Ruta Materna program, she responds simply: “No, what is that?”

Yoanna says her husband, Richard Acosta, earns minimum wage, which is not enough for them to eat. He is 40 years old and works as a security guard in a company. “He is in the men’s line over there, we came early,” she says, gripping the plate and the glass she has just received.

Yoanna is not the only pregnant woman here this Sunday asking for food. Dayana Torres comes from the shantytown of La Dolorita in Petare, on the eastern edge of Caracas.

Dayana is 28 years old and will soon give birth to her third child at the maternity ward in Petare, where she receives prenatal care. She knows nothing about any government programs or institutions that provide healthcare for pregnant women.

She says her two previous pregnancies were easier. “There was more food before. Now we eat twice a day and very little.”She doesn’t remember the last time she ate meat.

“The father of my child moved to Colombia and I am going through a very difficult situation,” she says. “I have to go out on the street and beg for money, because in La Dolorita where I live no one helps me.

“They have not given me vitamins, folic acid, calcium and no medication in the maternity ward at Petare. But what I need most is food for my children,” she says.

Then she starts to eat and she smiles. “I have been craving pasta for a long time.”