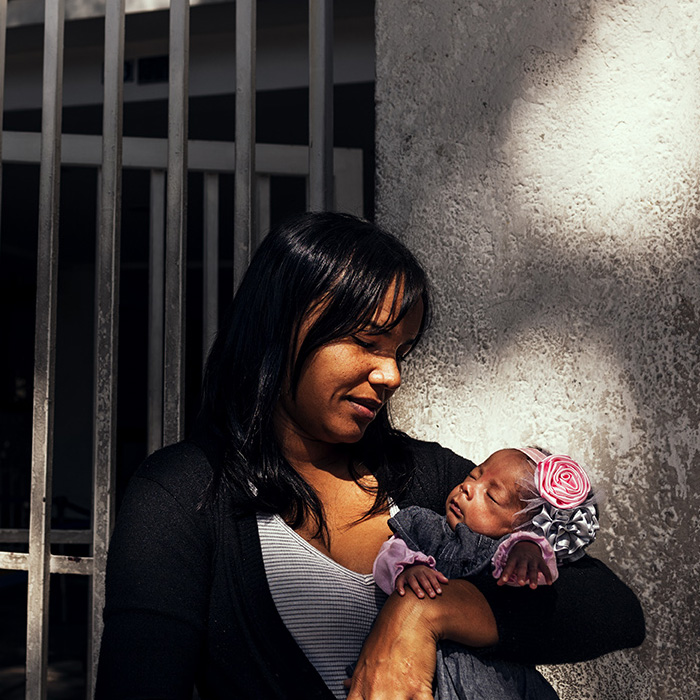 Born too soon into a world of scarcity

Although Miranda is only three months old, a doctor has already decreed she should take swimming lessons before she reaches school age.

This is because she was born in only her 29th week (11 weeks early). Not only did she weigh just 1.1 kilos; she also had a breathing problem. Her twin sister didn’t make it and died a week later after her lungs filled with fluid.

The doctor’s instructions seem minor compared to the many medical guidelines which apply to premature babies. Miranda has been lucky; she has a family and her mother was able to give birth in one of the biggest maternity wards in Venezuela’s capital of Caracas. That’s a rare privilege in a country where the number of beds available in hospitals has halved since 1995.

Her mother, Wensy Garcia, is a 33-year-old manicurist who was eagerly waiting for her daughters to be born. A first-time mother, she had been going to the physician for prenatal care in a private hospital, but her water broke unexpectedly. She had to ride around all of Caracas to get a place at a hospital where neonatal intensive care could be guaranteed for the two babies.

Wensy visited two private hospitals first. She was rejected by one because of the short length of her pregnancy; the other charged very high prices. She ended up at the Santa Ana maternity ward. “This was the only one that could guarantee incubators for the baby,” Wensy says.

Although she and her husband had to go to many pharmacies to find all the supplements she needed, Wensy never missed a dose.

Wensy lives in Petare, a large urban slum near Caracas considered to be one of the largest shanty towns in Latin America. She was able to go to a private hospital thanks to private health insurance and could even afford a balanced diet despite the high cost of living in Venezuela.

Her family, she says, achieved the impossible by providing her with protein for lunch and dinner.

She still lost weight, however. Wensy weighed 70 kilos at the beginning of her pregnancy, then dropped to 65. She ended up at 71 after giving birth, and attributes the weight loss to nausea and vomiting during the first stage of pregnancy.

The hardest part for her and her husband was going from one lab to another in the city, in search of tests the hospital didn’t have the resources to run. Several times they had to repeat the tests because doctors said the babies’ blood sample was insufficient, which meant starting the ordeal all over again.

“Every little drop of blood taken from the babies would deplete them. It was horrible,” Wensy recalls.

It all sounds painfully familiar to Argelis Miranda, 40, who delivered her daughter Anabella at 28 weeks, when she weighed only 920 grams.

Both Miranda and Anabella had to stay in the hospital for two months, during which both became infected, with a bacterium and a fungus respectively. This added new concerns for their parents, because of a chronic shortage of medicine in Venezuela. The country has only around 15 percent of the medicines it needs.

“She was already a month old and was about to be discharged from the hospital,” Argelis recalls. “She was weighing 1.2 kilos, and then she got infected at the Santa Ana maternity ward and this led to septic shock. The doctors had to resuscitate her. She lost ground, everything got complicated.”

What about the medicines she needed?

“Fortunately, most were provided by the hospital. We had to look for only one antibiotic they didn’t have.” The personnel of the Concepcion Palacios maternity ward ultimately donated the life-saving antibiotic.

“By the grace of God, the fungus didn’t lodge in her heart or any other part of the body. But there were problems with oxygen that affected the baby.” In addition, she was so premature that she suffers from retinopathy. “There are not enough blood vessels in her retina and the retina detaches. She will have to undergo several surgeries,” Argelis says.

One surgery has already been performed, thanks to a group of ophthalmologists who donate their services in Santa Ana Maternity.

Miranda and Anabella have survived their first 28 days, the most critical for underweight babies. They are already living in their homes, trying to gain grams in a country where many are losing kilos.