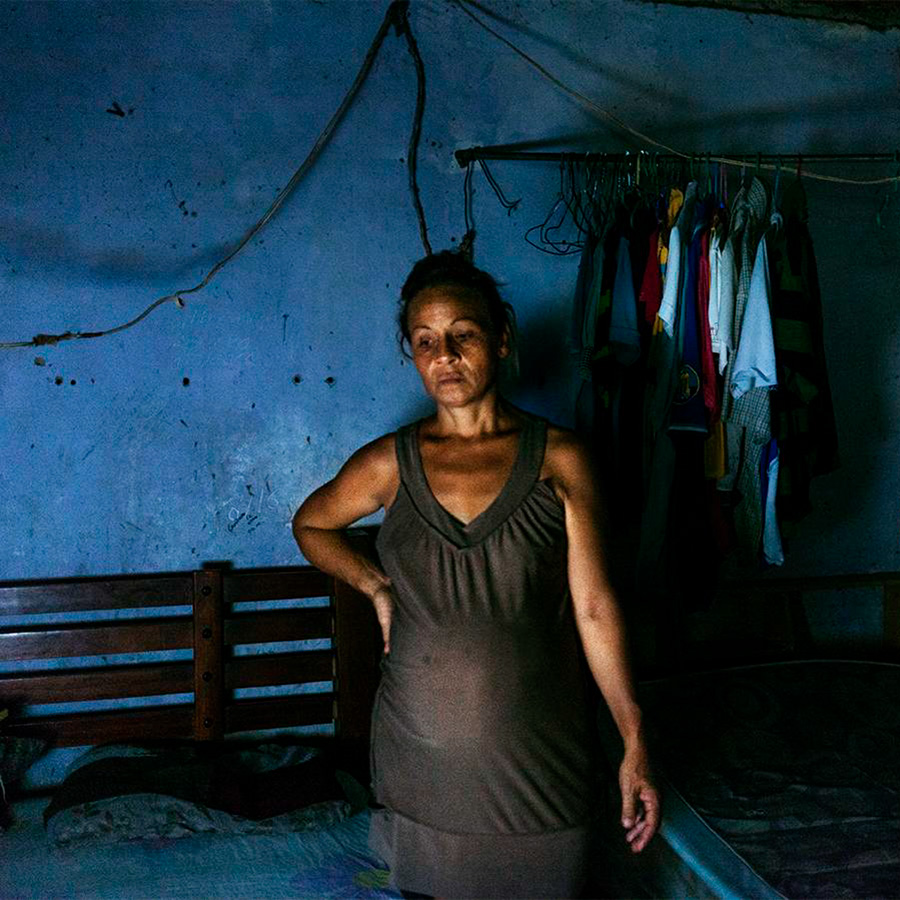 Mariluz, Angie and Maria live in a shanty town in Los Valles del Tuy region, near Caracas. Each of them is pregnant. They are as eager for public aid to protect them from the fallout of Venezuela’s economic emergency as they are to give birth.

Mariluz Urbina is resting on a wicker chair just outside her house. It’s 10:30 on a Sunday morning, in November. She hasn’t had breakfast yet. “I haven’t eaten anything,” she says. “I was going to eat an arepa [cornbread, a Venezuelan staple]”

She stops talking as the child looks out of the doorway with the plate already empty in his hands.

Their community, Tomuso Viejo, is located in the state of Miranda in north-central Venezuela. It’s a shanty town that grew up around the city of Santa Teresa del Tuy, a city in the Valles del Tuy region. Tomorrow, Mariluz, who is six months pregnant, will have to walk long dirt tracks until she gets to the main road where she can catch a bus. Buses haven’t come directly to her shanty town for months.

“Tomorrow I will go to see Dr. Maria,” she says about her second visit for prenatal care. The appointment “is in Dos Lagunas [the next town over], because there is nobody in our clinic here.” Mariluz’s neighbors confirm that nobody has worked in the Mision Barrio Adentro clinic in Tomuso Viejo for the last four months.

Mariluz was not impressed with her last visit to that clinic. “They gave me some folic acid that had expired, so I didn’t take it”.

She is 40 years old and lives with two of her six children. The others live with her mother-in-law. Her husband doesn’t have a permanent job.

She used to receive assistance through the government’s Hijos de Venezuela (Children of Venezuela) mission. This program was merged with the Gran Mision Hogares de Venezuela (Grand Household of Venezuela Mission), a more grandiose sounding but no more effective project created by President Nicolas Maduro to combine all of the state-led initiatives for poor families.

That happened in 2014. Mariluz hasn’t received any assistance from this new program. Overall, she’s just received a Christmas bonus from the government.

Food bags from the CLAP (the Spanish acronym for the Local Committees for Supply and Production) — the main food policy designed and executed by the government as a response to the economic crisis — had arrived in Tomuso Viejo two days previously. They were a week late.

They were also late in October and did not come at all in February or June. The bags contain one kilo of flour, one kilo of sugar, one kilo of lentils, two kilos of black beans, three kilos of rice, two liters of oil, two liters of a dairy formula, three packs of pasta of 200 grams each, four cans of tuna fish, one jar of tomato sauce and another of mayonnaise.

“Doctors tell me to drink juice and eat meat,” Mariluz says, and laughs. Then she adds “and fish and salad.” She bursts out laughing. Her friends join in, laughing until they run out of breath, then Mariluz continues.

“We could eat before, but not now. I tell my daughter that this baby girl is going to be born underweight.” She notes that at six months, “I weigh 60 kgs even pregnant, and that is my regular weight. The doctor has told me I have to be well-nourished, but how do I do that?”

Angie Serrano lives a couple of streets down. She is 20 years old and five months pregnant with her second child. She weighs 48 kgs; the doctor has warned her she should eat better. She has quarreled several times with the person who runs CLAP in the shanty town, demanding to be added to the list of its beneficiaries.

As soon as she knew she was pregnant, she went back to live with her mother, but they haven’t updated the CLAP census in that area since then. “I have rice, pasta and legumes for lunch sometimes,” she says. Her mother explains, “That’s if one can find those. If not, she eats arepa.”

In October, Angie started to work at the Plan Chamba Juvenil, a state-owned employment program for young adults who didn’t go to school or have a household burden. She was still waiting for her first payment.

Credit: Adriana Fernandez Loureiro / Efecto Cocuyo Mariluz’s friends and neighbors in the shanty town of Tomuso Viejo in the state of Miranda all report malnutrition and babies with low birth weight.

“I have gone to prenatal care at the hospital in Santa Teresa del Tuy, they have prescribed some tests, but I can’t afford them,” she says.

Angie hasn’t had a good follow up of her pregnancy at the clinics either. “The doctor wouldn’t accept those tests they run at Dos Lagunas,” she says, talking about the Barrio Adentro clinic. These Cuban-run facilities are small preventive clinics designed to improve health in the poorest parts of the country, but in recent times, they’ve been compelled to provide regular healthcare despite a chronic shortage of resources.

“That is a problem: private centers and other centers don’t accept tests run by the Cuban [doctors at Barrio Adentro],” says Ninoska Colmenares, another neighbor and mother in the community.

Maria Briceno lives in a house across the street. She is six months pregnant and receives prenatal care at the hospital of Santa Teresa del Tuy.

She remembers being provided with vitamins, folic acid and iron for free in the Tomuso Viejo clinic when pregnant with her two older children, who are now seven and four years old.

This time, instead of going to the clinic, she had to go to the hospital. At first, doctors told her they didn’t want to see her, arguing that she had to be seen at a Barrio Adentro clinic.

“But the one we have near our house is closed, there are no doctors there. I can’t wait for the baby to be born to be seen. I don’t want the baby to have a health problem or a deformity, which can be prevented or solved during the pregnancy.”