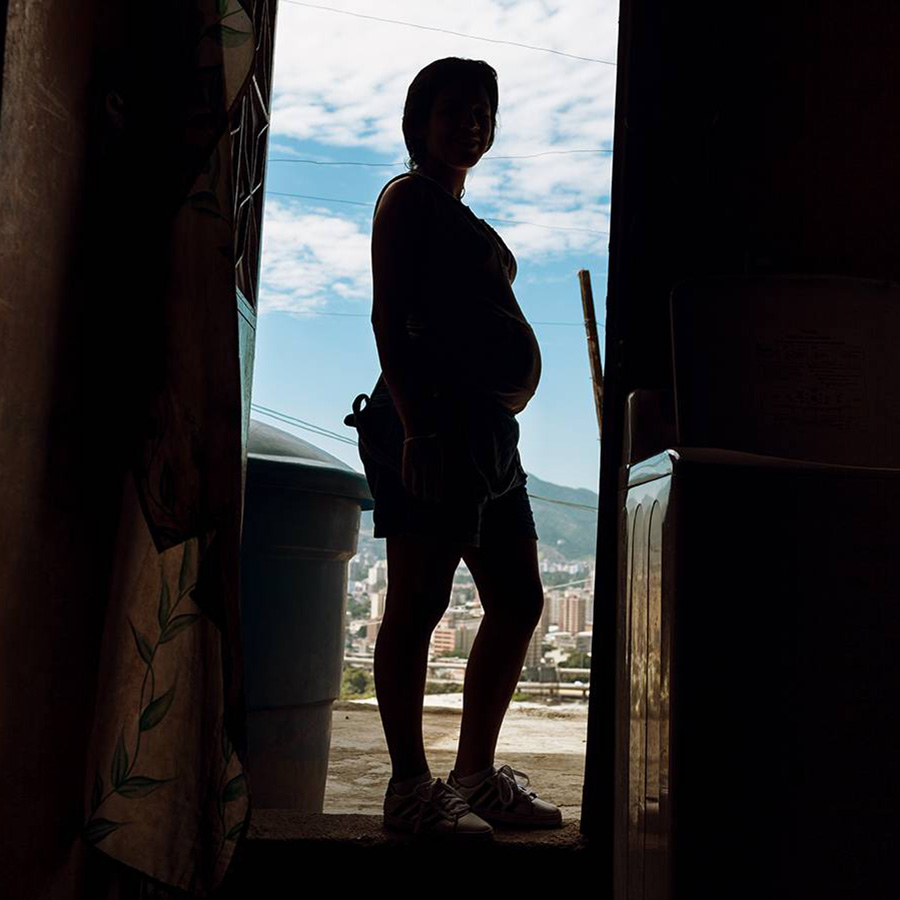 Imberly Valecillos lives at the top of the hill in La Acequia, one of the poorest areas in the shanty town of El Guarataro. It’s booming settlement with a great tradition of community organizing on the western edge of Caracas, Venezuela’s capital.

At 25 years old, Imberly is already a mother of three, and she was pregnant again when reporters talked to her last November. But this time she is without a partner. Hers was killed in an upper-class neighborhood in Caracas, after leaving a nightclub. The murder remains unsolved.

Imberly’s hardship didn’t begin with the shortage of food in Venezuela, but with her partner’s death. He was the breadwinner of the household, as he worked as a fleet assistant at a soft drink company.

At seven months pregnant, Imberly must take care of her three children, so can’t go out to work. She survives thanks to the bags of cut-price food sold by the Local Committees for Supply and Production, known by the Spanish acronym CLAP, that she receives “every 15 or 20 days.” Her family also helps out.

She gets her carbohydrates from the CLAP bags, which typically last for two weeks. The few proteins she eats are provided by her family, although they are also affected by the shortages and high prices of food. Imberly’s two older children, aged nine and six, eat their breakfasts at school.

“So with the help of my mother-in-law, my mother, and his family [her late partner’s], we can cope,” Imberly says.

She claims that her children eat three times a day and “sometimes more.” Her one-year-old daughter shows no signs of hunger, at least nothing visible; she is vivacious and has a good weight.

Imberly used to go to the doctor’s regularly during her pregnancy up until her partner died. She receives prenatal care in a Barrio Adentro clinic near her house. She says she has been given supplements (iron, folic acid, and calcium) only two out of the four times she has visited the physician.

The shortage of food has forced her to stretch supplies, especially the corn flour used to prepare arepas, a type of cornbread basic to Venezuelan meals. Sometimes she replaces the flour with fried green plantains, and that’s all she and her children have for dinner.

Imberly is worried about whether she will be able to find or afford diapers for the new baby. One pack of 20, enough for a week, costs around 140,000 bolivars; the monthly cost would be 560,000 bolivars. This is higher than the minimum wage, which was 456,507 at the time of Imberly’s interview in November 2017.

But her main concern is sugar, which has not been included lately in the CLAP bags. “I can’t afford the kilo of sugar, which costs 80,000 or 90,000 bolivars, that I need to prepare my little girl’s bottle,”she explains. Sugar alone costs a quarter of the minimum wage.

It is 10 o’clock in the morning; on the stove she is boiling lentils for lunch, along with rice and plantains. What food is inside their refrigerator?

Imberly responds simply: “There is nothing, only my sister’s chicken.”