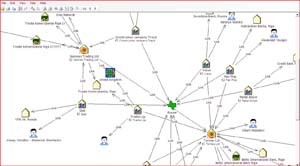 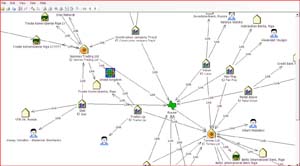 A maze of companies and proxies make a money laundering platform.

The Organized Crime and Corruption Reporting Project (OCCRP) looked at more than 500 pages of transactions at Tormex’s Baltic International Bank account. OCCRP reporters tracked down scores of companies to understand exactly who was sending or receiving money from Tormex. A large quantity of the transactions came or went from phantom shell companies were traced back to proxies – some who were willing but some who were not. Here is a sample of the findings:

In February 2008 a small Moscow company, NPP Kvadro OOO, sent US$36,584 to Tormex’s account in Latvia. NPP Kvadro was established in November 2007 and its sole shareholder and director is Aleksandr Lokatkin from Moscow.

Lokatkin is mentioned in at least two court decisions as a shareholder and director of various shell companies which were used to avoid taxes. According to the Moscow Arbitration Court, these companies don’t exist at the registration address and don’t conduct any commercial activity.

According to the Russian state commercial registry, Lokatkin was the sole shareholder and director of more than 100 companies. OCCRP looked at the activities of these companies and found that they are also phantom paper companies. The majority of the companies were liquidated within a few months of registration. Others changed their names several times. Others merged with other Lokatkin controlled companies. OCCRP tried to track down Lokatkin, but he did not answer his phone.

The same month another small firm from Moscow – Partner OOO – transferred US$40,720 to the Tormex account. The company was established in July 2007 and its sole shareholder and director was Mihail Svetlyshev. Svetlyshev, 45, is mentioned in a 2010 court ruling in connection with a small firm that was used to avoid taxes. The judge noted that Svetlyshev is the director of 169 firms, shareholder in 143 and accountant-general in 28 companies. Svetlyshev testified in court that he had never been a shareholder, director, or accountant and had never signed any documents regarding the company in question. OCCRP tried to track down Svetlyshev to ask about Partner but his phone was disconnected.

During January, 2008 another seemingly unknown Moscow company – Kom Stroy OOO – transferred more than US$1 million to Tormex’s bank account. Kom Stroy was established in August 2007 by Daniil Makogon. According to the Russian State Commercial Registry, Makogon, 25, is the sole shareholder in more than 15 companies. Makogon told OCCRP that in 2006 he worked as a courier for a law-firm, which specialized in establishing companies.

“When I started to work in this firm, they asked me to give my passport. They said it was insurance so that I would not disappear with money or documents. I was naive and didn’t pay any attention to it,” says Makogon. After a few months, Makogon quit his job and got his passport back.

“The police started to call me asking me about companies allegedly registered on my name. I was interrogated about various frauds. I understood that the people from the law-firm used my passport. I tried to find them, but their phones didn’t work anymore, and the firm itself disappeared from their office. Just today I wrote a statement in the tax inspection office, that I had never had any knowledge of all those companies that were registered with my passport,” he said. Makogon said he doesn’t remember the exact name of the law-firm.

Other persons had similar experiences. In 2008, Moscow company Fair Play OOO sent US$100,000 to Tormex. Fair Play’s owner Alexander Viuogin said he started the company in 2005 but never conducted any commercial activities. The company lay dormant he thought but in 2008 when he was filing his required annual returns, he was told by tax officials that the company had been liquidated. Viougin says he never heard of Tormex. “I have no idea how my inactive company could have transferred any money, because I didn’t even open a bank account for Fair Play,” he said.

Most of the organizations that sent money to Tormex appear to be either phantom paper companies or fraudulently used companies. Most of the owners, directors or shareholders are either proxies, unwitting people whose documents have been misused or untraceable people. Many have past records for fraudulent activities.

Yukon OOO sent Tormex more than US$10 million. According to Tormex’s Latvian bank account, the money was sent for “spare parts for electronic equipment.” There are dozens of companies with the name Yukon in Moscow, but OCCRP identified the one which sent the money. Its owner, Natalya Kletsko, 29, told authorities that she was paid US$60 to use her name. Kletsko, according to the court decision, was interrogated by Aleksei Droganov, an officer of the Department of tax crimes of the Russian police.

Droganov is on the black list of Russian officials who are forbidden to enter the US due to suspected involvement in a tax fraud case against Hermitage Capital Management and the torture and death of Hermitage’s lawyer Sergei Magnitsky. Droganov worked for Lt. Col. Kuznetsov. He was named by Magnitsky in his 2009 testimony and complaints against the police. In 2007, Droganov raided Hermitage’s offices without a warrant and, under the direction of Kuznetsov, confiscated the original formation documents and company stamps that were later used in the US$230 million fraud. Droganov searched Magnitsky’s house and arrested him one month after Magnitsky’s testimony.

Yukon used bank accounts in the Moscow-based Investsberbank (now Russian OTP bank), which belongs to the largest commercial Hungarian bank – OTP bank. The representative of the Russian OTP bank told OCCRP that information about transactions and accounts of clients is private according to law. But “today there are no claims against the bank from supervisory bodies or law enforcement,” said a representative for OTP bank.

One depositor to Tormex was Ivekta OOO, which sells car equipment in Dubna, near Moscow. OCCRP called Ivekta’s general director Dmitry Starokoshko. When Starokoshko heard the reporter’s questions about Tormex and its cooperation with Ivekta, Starokoshko answered that he can’t help us and doesn’t want to answer such questions.

According to the Russian commercial registry, Metal-Inkom was established in April 2007, just two months before its first payment to Tormex. Metal-Inkom has one director and shareholder – Elmira Kuzeeva from Rostov-on-Don, a city of one million in Southwest Russia. Kuzeeva is simultaneously director and shareholder of more than 200 companies, according to the registry. In the Russian Arbitration Court database, OCCRP found a decision where Kuzeeva acted as the shareholder of a phantom firm. According to the case, Kuzeeva was interrogated by Russian police and told them that she registered the firm at the request of somebody else. The case doesn’t specify the name of the person who asked Kuzeeva to establish the company and OCCRP could not find any contacts for Kuzeeva.

The representative of the Central Bank, which is the supervisory body for all Russian banks, wrote in an official letter to OCCRP that authorities of the Central Bank knew about the transactions to Tormex and other phantom companies.

“From 2007 until 2011 [Tormex and other] companies have repeatedly been detected conducting dubious operations aimed on withdrawing money abroad. The Central Bank always reported such transactions to the Federal Service for Financial Monitoring,” wrote a representative of the Central Bank. He also mentioned that to stop such operations in the framework of the law is very difficult. “Usually such transactions are made by the banks in correspondence with the laws on…money laundering, criminal proceeds and terrorist financing. This makes it impossible to charge the banks for violating anti-laundering legislation.”