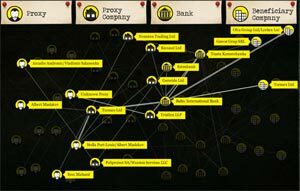 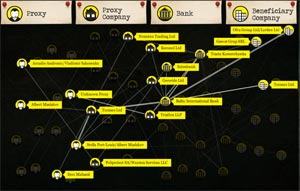 A maze of companies make up a money laundering machine.

While governments and citizens of Eastern Europe were struggling with the recent financial crisis and trying to borrow money from international financial institutions, billions of euros circulated in the region in an illegal, parallel system that enriched organized crime figures and corrupt politicians.

The system is built on hundreds, maybe thousands, of ever-morphing phantom companies. They exist on paper only and appear to be run by scores of common people, who are, in fact, simply proxies. Many are unaware that their names appear in official documents as the human face of a company. Others are naïve or don’t care.

Crime lords and corrupt government bureaucrats use these paper companies run by proxies to launder illegal billions into usable wealth. The crimes they commit don’t come back to them because of the subterfuge and unwitting proxies are left alone to face the consequences of actions they never performed.

“These methods are used to launder funds in every kind of international crime—human, drug, and weapons trafficking, financial crimes like tax evasion, which has been a cause of the current euro crisis, and terrorist financing. The current system leaves the global financial system wide open for these kinds of crimes,” said Anthea Lawson, head of the Banks Campaign at Global Witness, an international anti-corruption organization.

“One of the main findings here is that 20 to 25 percent of opiates which are being produced worldwide are being seized. When it comes to cocaine, that figure rises to approximately 40 percent. When it comes to money laundering, we are talking about an order of magnitude of 0.2 percent,” said Thomas Pietschmann, of the United Nations Office on Drugs and Crime (UNODC) Studies and Threat Analysis Section.

The Organized Crime and Corruption Reporting Project (OCCRP) has identified some of these companies involved in the laundering business.

They share common traits. They have no offices, no employees. They pay no taxes and often report no activities to regulators. Their real owners are hidden behind proxies – persons with no connection to them – who stand in as director and shareholders. They are registered by offshore registration agents known to work with organized crime. They are financial phantoms and their only possession typically is a bank account in a Russian or Latvian bank.

Some are closed now. Some have been used even though closed. Others will likely take their place.

The phantom companies, OCCRP found, are intertwined into an unseen global offshore financial platform. They come to light dimly in the arcane details of a few court cases where crimes have been detected. Otherwise, they remain private accounts at private companies doing private deals. Nobody sees the whole puzzle – just a few pieces.

“Law enforcement all over the world track corrupted officials and organized crime groups case by case. They fight against individuals, but not the system,” said Ruslan Milchenko, ex-operative officer of the Department of Tax Crimes of Moscow police, and today head of the anti-corruption center Analyses and Security. “Practically all the cases show us that criminals from completely different parts of the world use the same technologies to wire money through banks, to launder it through dozens of phantom companies and then send it offshore using front companies and nominal directors.”

“Let’s say that some partners ask us to move some money from one place to another,” he says. “We help them, but we don’t know where the money is. It’s not our business. We’re just doing a favor. Of course, this is an imaginary example.”

Romanian prosecutors say Le Duc Hoa embezzled more than US$800 million and heads Asian organized crime in Eastern Europe with connections in Russia and Ukraine. Asian crime groups use and may be some of the architects of the proxy platform.

OCCRP reporters obtained bank records from three of the interlocking companies that form part of this platform: Tormex Ltd, Sirena and Nomirex. They combed through thousands of financial transactions, volumes of banking transactions and interviews with numerous people to connect the dots in what seemed, at a first glance, a sea of random financial dealings and strange coincidences.

Users of the platform include not only Asian organized crime but also people who may be behind the corruption outed by Sergei Magnitsky, a fearless Russian whistleblower who died under suspicious circumstances in prison recently. It includes a group of Moldovan businessmen who are under investigation for fraud. It includes banks and companies involved in one of the worst money laundering cases in US history – Wachovia Bank’s alleged laundering of billions of Sinaloa Drug Cartel money.

The series “The Proxy Platform” looks at the companies, the proxies, the banks and the registration agents, who form this network.

The amounts in question are staggering. Tormex Ltd, one phantom company OCCRP tracked, was opened in New Zealand in 2007. Fifteen months later, it had logged more than US$680 million in transactions.

Much of the network was built through phantom companies and proxies in Russia. Milchenko said official figures from the Central Bank show that in 2011, 250,000 Russian firms paid no taxes and submitted annual reports reporting no activities. Simultaneously, the Central Bank found that more than 4 trillion rubles (US$130 billion) had been processed through accounts of these inactive companies.

“This is almost half of the budget of Russia in 2011,” he said. And that is just the official accounting.

“Unofficially we believe that of the 5 million firms registered in Russia, 3 million or even more are phantom companies, which don’t conduct any real commercial activities and are aimed only on money laundering,” said Milchenko.

Russia is not alone.

“Eighty percent of all the grand corruption cases we identified involved a company or a trust.,” said Emile Van der Does de Willebois, a Senior Financial Sector Specialist for the World Bank/UN Stolen Asset Recovery Initiative (StAR). “Their prevalence in these cases is very high. And these corporate vehicles themselves were both on shore and offshore,” he added, emphasizing that investigators “can’t just point their fingers to an exotic island.”