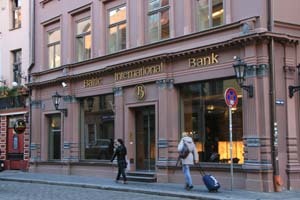 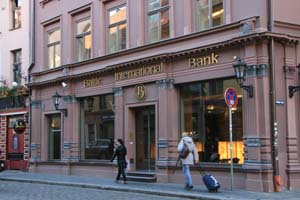 Hundreds of million of Tormex money poured through the Latvian bank.

In 2008, a Romanian who felt cheated by three Moldovan businessmen filed a civil case in an obscure courthouse in the capital of the tiny Republic of Moldova, in effect asking the authorities for help against a phantom offshore company called Tormex Ltd. Prosecutors subpoenad two years’ worth of Tormex’s bank accounts in Latvia and what they found was stunning.

It seemed that more than US$680 million a year was pouring through Tormex’s accounts.

Those bank records opened a window for reporters from the Organized Crime and Corruption Reporting Project (OCCRP) to a world where crime is measured in billions.

Tormex Limited was one of these companies in the Proxy Platform.

For over 12 months, thousands of transactions and commissions from all over the world circulated through the Tormex bank account in Latvia before they were diverted to other offshore companies.

Yet Tormex didn’t really exist. It was a phantom. It had no offices, no employees. Its director was a Russian citizen; an unwitting stand-in with no idea there was such a thing as Tormex. What Tormex did own was a bank account at the Baltic International Bank in Riga, Latvia. Who really runs the operation, no one knows, so carefully have they disguised themselves behind layers of dead-end proxies and offshore companies.

But their goal is boldly clear: launder money and hide assets. It insured that crime profits were hidden behind outward-looking legal import-export operations or consultancy and intermediary agreements. Money that flowed through Tormex has been connected to criminal activities or is simply lost in the maze of offshore companies. It is no coincidence that Tormex’s account was in Latvia, a country with one of the least transparent banking systems in the world. It is recognized as a hotbed for international money laundering.

OCCRP also found out that Tormex Ltd played a role in laundering the money for a fraudulent scheme that ultimately led to the death of lawyer Sergei Magnitsky, a brave Russian whistleblower. Two companies involved in the Magnitsky case and in the looting of the Russian state budget, Nomirex Ltd and Keronol Ltd, sent almost US$15 million to the Tormex account.

Birth of a Phantom

In February of 2007, Tormex was registered in Auckland, New Zealand by the GT Group. The GT Group was a business registration firm based in that city and already well known to law enforcement as a company that specialized in setting up untraceable offshore companies, fronted by proxies. It helped organized crime, corrupt leaders and terrorists avoid detection, launder money and evade taxes. New Zealand authorities, in fact, closed GT Group, in June of 2011. It registered companies that were later connected to illegal arms trading between the North Korean government and Iran and in deals with Hezbollah, Mexican drug cartels, Russian organized crime groups and others.

Tormex Ltd, was owned by another paper company and its director was a proxy named Stella Port-Louis. Port-Louis, 32, was a professional proxy for the Taylor network, by all accounts. She lives in the Seychelles islands off the coast of Africa far from the 577 New Zealand offshore companies, at least 90 Wyoming companies and 164 companies in Great Britain of which she has been listed as director.

Port-Louis’s directorship lasted only hours. On the company’s birth date, she signed a power-of-attorney which effectively gave control to a second-level proxy: Albert Maslakov. Maslakov, 44, a driver, lives very modestly outside Moscow. He could only imagine the amounts pouring though Tormex’s accounts in his name. In fact, he was completely unaware Tormex existed and that he was its director until OCCRP reporters contacted him.

Yet documents at Baltic International Bank indicate someone used his name and signature to open a multi-currency account for Tormex Ltd at the end of May, 2007. It recorded its first transaction in September of 2007 and its last on Sept. 3, 2008. It stayed inactive until the offshore company was terminated in New Zealand on June 22, 2010.

Maslakov told OCCRP that three or four years ago he was working as a driver in the Russian state-owned Center-Telekom, which provides telecom services throughout the country.

“One of my colleagues offered me a way to earn some money. I can’t remember his name now. I asked him what I had to do, and he replied ‘Nothing, we just need your passport details.” Maslakov remembers that he signed some documents in English, which he didn’t understand. “I’m regretting now that I did it, but I really needed the money,” says Maslakov.

Maslakov is not the only one who sold their passport details.

“There are hundreds of law-firms in Moscow, which specialize in setting up ready-made shell companies for their clients, who want to remain in the shadows. Usually law firms use poor people, who sell them passport details. The sum for one passport may vary from US$100 to US$300,” says Ruslan Milchenko, ex-officer of the Russian tax police.

Tormex opened a multi-currency account – a usual practice in the banking paradise of the Baltic state. The balance was held in seven currencies (USD, EUR, GBP, CHF, SEK, JPY, CAD), but the most significant transactions were in US dollars.

The Tormex Ltd bank account for the year of its life has more than 500 pages offering details of thousands of suspicious transactions with phantom companies in offshore jurisdictions around the world as well as with legitimate companies in Europe, USA, the Middle or the Far East.

Occasionally, payments were made to real people. A woman got €6,000 (US$8,100) at an Italian bank in Bari; another one received US$13,000 in Miami, USA. A man got US$12,000 in Chicago. All were former Soviet Union immigrants living in the West, with two exceptions: an Egyptian and a Bulgarian.

Many of the transactions appear to be commercial deals at first glance. They have descriptions and even associated contracts, reporters were told when they called the companies involved. But in only one case did the companies say they received any goods. Mostly, the contracts were cancelled after the transaction and the companies repaid for their order through a different offshore company. Some admitted the contracts were bogus. The pattern matches a money laundering operation Russian organized crime uses.

Tormex Limited also had transactions with other offshore proxy companies engaged in a similar business including Nomirex Trading Ltd, Keronol Ltd, and Melide Ltd. OCCRP found that Keronol Ltd sent almost US$15 million to the Tormex Ltd account in a short period of time.

All of these companies were established by the Taylor network in New Zealand. The companies show up on Suspicious Activity Reports, reports banks file when they suspect money laundering. These reports became the basis for a US government money laundering case against Wachovia which was accused of laundering billions of dollars for the Mexican Sinaloa drug cartel. Wachovia was fined US$50 million and it surrendered US$110 million in profit, which was the highest fine levied against a bank in the US history.

Triallon is registered in London, England, while Geowide, Ofra Group and Loritex were established by the Taylor network in Auckland. All are now closed. All had hidden ownership, and all had bank accounts in Latvia.

They are likely missing pieces of the platform puzzle.