The Security Service of Ukraine suspected that Vyacheslav Boguslayev had secretly sold more than half of Motor Sich to Chinese investors, and authorities moved to block the sale via a freezing of shares.
Read more

The sale of a Ukrainian aerospace company to Chinese investors sparked uproar in Ukraine and the U.S. over fears it would hand China control of sensitive military technology. The deal had been carried out in secret starting two years earlier.

Thanks to its Soviet-era connections this firm, Motor Sich, had become the main supplier of engines for the Russian military’s famed attack and transport helicopters until 2014 when sanctions ended those ties. But the sale raised concerns, both inside and outside of Ukraine, that the maker of some of Ukraine’s most prized aerospace hardware would fall into the hands of the Chinese government.

Motor Sich’s president and shareholder, Vyacheslav Boguslayev, a former politician, sold his company in secret: The buyer’s identity was hidden behind anonymous offshore companies, and the 2015 deal was only made public two years after the sale. When the news broke in 2017, the Security Service of Ukraine (SSU) asked for a freeze of the shares that had been sold, which was granted by a court in Kyiv.

The U.S. government called the sale “predatory” for its neglect of Ukrainian interests, and described the reported buyer, the privately-owned Chinese company Beijing Skyrizon Aviation Industry Investment Co., as tied to both the Chinese government and army. Beijing Skyrizon, the Americans said, “is actively seeking to acquire intellectual property and technology to advance key military capabilities that threaten U.S. national security.”

Now, documents from the Pandora Papers leak seen by OCCRP reveal that there was actually a maze of offshore firms behind the secret deal, and a draft agreement uncovered in the paperwork shows that it may have been facilitated by the Ukrainian offices of major U.S. law firm DLA Piper, which drafted the deal.

The Pandora Papers are nearly 12 million documents from offshore corporate service providers leaked to the International Consortium of Investigative Journalists. This story is based on documents found in the files of two of these service providers, Alcogal and CCS Trust. OCCRP obtained additional information about the deal from emails leaked from the Kyiv office of DLA Piper.

The plan seemed designed to avoid falling foul of Ukraine’s antitrust laws. DLA Piper proposed structuring the transaction so that several shadowy companies acquired large shares of Motor Sich, with the owners of these offshore vehicles used as apparent proxies for Beijing Skyrizon’s real owners. No company would have more than the 25 percent needed to trigger an anti-monopoly review.

When the sale of Motor Sich was announced in 2017, media reports said it was directly sold to Beijing Skyrizon. But that’s not what happened. The actual sale closely followed DLA Piper’s plan of splitting it between seemingly independent but actually related companies.

DLA Piper told reporters it does not comment on client matters, but follows the “highest standards of ethics and professionalism.”

Since the deal was signed, the American-based firm sold its interest in its Ukrainian firm in June. The firm remains involved in the deal, however. Press accounts have indicated that DLA Piper is one of three international law firms representing Beijing Skyrizon Aviation as it makes a bid to recover the assets frozen by the Ukrainian government. 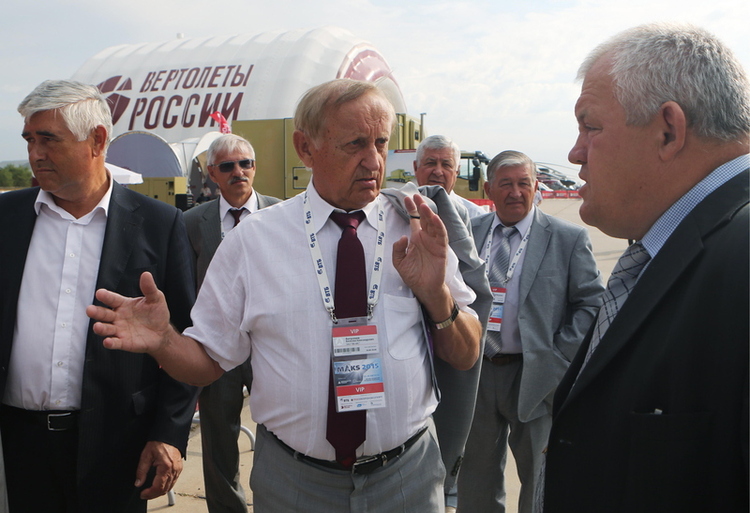 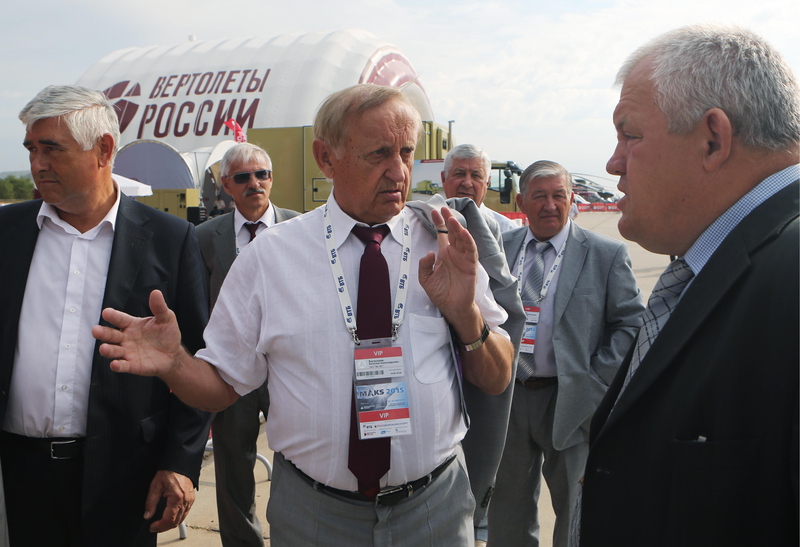 The aerospace company Beijing Skyrizon is controlled by the entrepreneurs Wang Jing and Du Tao. Wang, who reportedly has a background in traditional Chinese medicine, had previously made headlines with plans to build a $50-billion canal through Nicaragua to compete with the Panama Canal. He became the CEO of the telecom company Xinwei Technology Group Co. Ltd. in 2011.

However, according to documents seen by OCCRP, Beijing Skyrizon acquired just 9.99 percent of Motor Sich’s shares via the BVI-registered subsidiary Skyrizon Aircraft Holdings.

Most of the remaining share package was acquired by offshore firms owned by four Chinese individuals, none of whom has a public profile as a businessperson, or the apparent means to acquire significant stakes in a firm the size of Motor Sich. The individuals were connected to some of the companies whose names were outlined in DLA Piper’s draft agreement.

The documents show that one of these people, 43-year-old Li Fengju, was employed as an accountant at a small provincial company in China between 2010 and 2016, earning $15,000 a year.

Li was listed as the beneficial owner of BVI-registered Firestorm Business Limited, which in turn owned Cyprus firm Reckoner Investment Holdings Ltd. The latter firm acquired 21.7 percent of Motor Sich’s shares for $217 million. The paperwork lists the source of the funds used to buy the aerospace giant as “salary.”

Despite their seemingly modest backgrounds, OCCRP identified Li and Xu as directors or shareholders of other firms in China and Hong Kong with links to Beijing Skyrizon, suggesting they are acting as proxies for the real shareholders.

Two other offshores involved in the deal may also be fronted by proxies. Amonte Holdings Limited, registered in the BVI, owns the Cyprus-registered Likatron Enterprises Ltd., which purchased 9.9 percent of Motor Sich. Amonte’s owner is listed as Ren Jinglin. Documents for the Belize-registered Twinstar Holdings SA, which purchased 6.23 percent, show Liu Yanning as the owner. Reporters were unable to trace or contact Ren or Liu. Some of these companies are mentioned in DLA Piper’s unsigned agreement.

Taken together, the offshores owned by these four people accounted for at least $407 million of the $500 million deal drawn up by DLA Piper.

Antitrust expert Agiya Zagrebelska, who was a member of the Anti-Monopoly Committee of Ukraine (AMCU) at the time of the deal, said the buyers split up the shares between multiple ostensibly independent individuals, because if any one person had acquired 25 percent or more the transaction would have needed approval from the AMCU — which it wasn’t likely to receive. “There would have been great difficulty in receiving approval ….[in that] it has signs of a ‘killer deal,’ when one competitor swallows another competitor to get access to technology,” Zagrebelska said.

It has signs of a 'killer deal,' when one competitor swallows another competitor to get access to technology.
– Agiya Zagrebelska, former member, Anti-Monopoly Committee of Ukraine

She noted Motor Sich was of strategic importance to Ukraine, but that the country has no legal structure to check whether a foreign investments in a strategic industry should be allowed. She said the AMCU would have looked at that issue if the sale had come before them.

The chairman of the supervisory board of Motor Sich, Anatoliy Malysh, said the dispute “was now at state level” and he could not comment.

“What AMCU is looking for […] is whether there is a de facto control of a 25 plus per cent share. Formal absence of such control on paper does not […] remove the need to seek AMCU approval,” said lawyer Markiyan Kliuchkovskyi.

The deal went public in 2017, soon after the AMCU got wind of it.

According to a July 2017 letter from Ukraine’s state anti-monopoly committee, the Chinese buyer had failed to apply for antitrust clearance for the deal, despite one party — Beijing Skyrizon — appearing to have acquired more than 50 percent of the company, according to the findings of the SSU.

While the purchase was structured through several buyers, the funding for the $500million deal all came from one source: The state-run China Development Bank, which is a channel for the Chinese government’s economic strategy.

“Collateralization […] has become the linchpin of China’s implementation of a high-risk, high-reward credit allocation strategy,” says AidData, a research lab at The College of William & Mary’s Global Research Institute, in a study on Chinese development projects published last month. 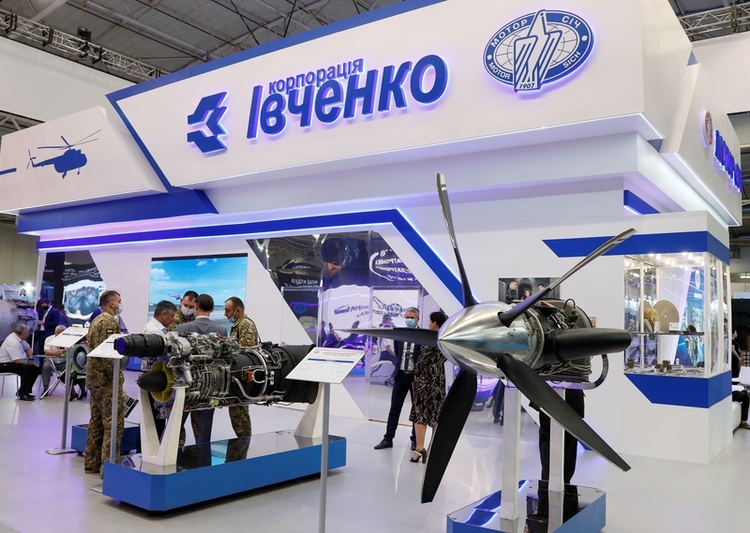 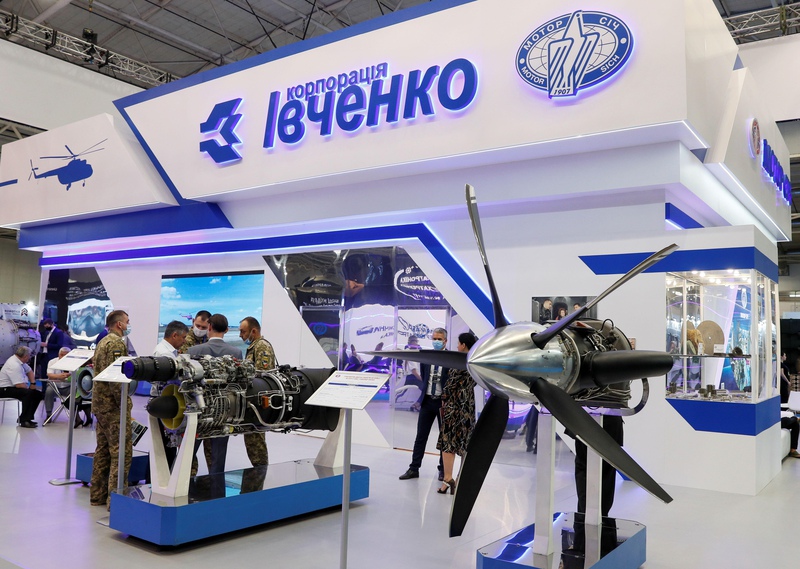 Credit: REUTERS/Gleb Garanich A Motor Sich display at an exhibit of weaponry and military equipment in Kyiv in June 2021.

When the sale of Motor Sich was revealed in Ukraine in 2017, it broke down after its legitimacy was challenged.

In September 2017, a Ukrainian court froze Motor Sich shares acquired by some offshore firms on the orders of the SSU, which alleged that the sale would cause the “destruction” of Motor Sich due to the transfer of its technologies out of Ukraine.

Beijing Skyrizon’s owners, together with the shadowy figures Li, Xu, Ren and Liu are now suing Ukraine for $3.5 billion for breaching a 1993 investment treaty. DLA Piper is representing them in court.

If the group wins their case, there is a real possibility that Motor Sich will end up in Chinese state hands, just as critics of the deal feared. By 2021, the Skyrizon-Xinwei venture was sliding towards bankruptcy. A default on the China Development Bank loans would result in China Development Bank taking control of the company, assuming Beijing Skyrizon and its partners had recovered the firm in court.

Recent activity indicates that Skyrizon and Xinwei are not in good financial health. In May, the Shanghai Stock Exchange delisted Xinwei, and in July, Xinwei put its headquarters up for sale.