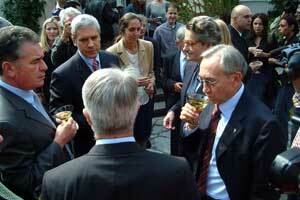 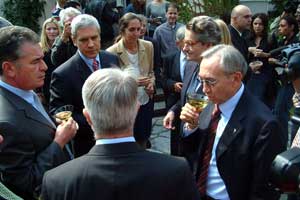 Only a decade ago, Miroslav Mišković’s Delta Bank sat on the United States Treasury list of companies prohibited from doing any business with Americans or American companies, part of a crackdown on the government of Slobodan Milošević.

Today, Mišković sits with presidents around the Balkans, influences policy across Serbia and in 2009 dined with US Vice President Joe Biden as a guest of Serbian President Boris Tadić.

It’s been quite a decade for Serbia’s first billionaire.

Mišković’s grasp on politics, consumers and the economy is enormous. In a October 1, 2007 report on the takeover of the C Market, the anti-corruption council said Mišković controlled “at least 6 percent” of Serbia’s entire gross domestic product. At the time, neither the anti-corruption council nor anyone else knew about the network of offshore companies operating out of Mišković’s Belgrade headquarters, which the Organized Crime and Corruption Project (OCCRP) found controlled tens of millions of euro worth of property.

In 2007, Forbes Magazine named Mišković as the richest Serb, with a fortune estimated at about €1 billion. The enormous wealth has been accumulated at a time when Serbia and the Serb people have faced hardship caused by war, international sanctions and internal unrest over Kosovo and other domestic issues, critics said.

At the same time, he’s built a monopoly through his Delta group on the country’s grocery market, the anti-corruption council found, but prosecutors and the state took no action.

“How does someone become one of the richest people in the world during years of sanctions, wars, poverty, inflation and all other things, while building a monopoly that affects me as a consumer,“ said Biljana Stepanović, head of the Economist Media Group in Belgrade.

“These are the basic questions that each of us is entitled to ask. Instead of answers, the company and the government grind up people like Verica Barać (president of the anti-corruption council).”

Mišković has for the most part avoided media scrutiny, and he did not respond to repeated requests for comment from the OCCRP. Delta group’s interests go well beyond Serbia. It owns a majority stake in Bulgaria’s Piccadilly chain of grocery stores, and this year announced plans to invest an additional €50 million opening Tempo shopping malls in the country by 2013. Mišković has also announced expansion plans for new retail centers in Banja Luka and has been buying land in Bosnia and Herzegovina.

But Serbia is his base, the place where his power and wealth influence politics, shape markets and, according to people who have spent a decade investigating his empire, protect him as he builds what they call a monopoly over the country’s grocery and retail space.

Delta Holding, which includes land, a major stake in the Port of Belgrade, shopping centers and automobile dealerships, employs 20,000 people, making it the largest non-government employer in the country.

Investigations into Delta and allegations of monopolies controlled by Mišković have dominated the country in the past decade, but no action has been taken.

“Everyone knows what is going on, but if officials took any steps to stop it, Mišković would just change the government,” said Barać, president of the anti-corruption council. “They have a dominant position on the market and, of course, they are abusing that position very much. Citizens of Serbia pay the price of monopoly and every article they buy is much more expensive.”

Mišković’s spending sprees are legendary, although they have been documented mostly in the foreign press. In 2006 he paid about €35 million for a mansion in Kensington, London for his son, a year after spending about €35 million for two London houses, one for his daughter, the Times of London reported on April 30, 2006.

Born July 5, 1945, Mišković grew up in Kruševac, graduated from the Belgrade School of Economics in 1971, and climbed the ladder in the former Yugoslavia’s business world as an executive of a chemical company

He briefly entered politics as vice president under Slobodan Milošević, but left the position after less than six months and started Delta M, in recognition of his initials. Soon Mišković opened Delta Bank, and by 1996 had received government permission to remove $25.98 million from Yugoslavia to unnamed offshore banks, according to archives of the Serbian National Bank that were obtained by the OCCRP.

Delta was one of many banks approved to make the transfers.

A 2001 National Bank report reviewed by OCCRP reporters accused Mišković of earning excessive profits by taking advantage of fluctuations in the price of the dinar during rampant inflation of currency during the war years of the 1990s.

Mišković could not be reached for comment, but has consistently denied having any involvement with the Milošević government. He also has denied any wrongdoing in the running of his Delta Bank, which was sold to the Italian Bank Intesa in 2005.

As Mišković became richer, threats against him increased. In April, 2001, he was kidnapped by what prosecutors believe were members of an organized crime gang. The London Telegraph reported that four armed and masked men in an Audi cut off Mišković’s car near Delta’s Novi Belgrade headquarters. He paid a ransom and was released within 24 hours.

The amount Mišković paid has been the subject of speculation, part of a pattern of rumors and innuendo surrounding his career.

For example, Serbian media at the time put his ransom at around $3 million, the kidnappers were asking for between $2.5 million and $5 million. But in the years since, newspaper and Internet reports began raising his ransom total, and today media reports uniformly put the amount at $10 million.

His kidnappers have never been caught, although police have linked the crime to the Zemun Klan, which was accused of organizing the 2003 assassination of Serbian Prime Minister Zoran Đinđić. Mišković has accused Liberal Democratic Party Leader Čedomir Javanović of profiting from the kidnapping, a charge Javanović denies.

The twisting of facts also landed Mišković in a public fight in 2007. A secret document supposedly written by the US Embassy claimed that Mišković offered to exert pressure on the Serbian government of Vojislav Koštunica to soften its stand on Kosovo.

In exchange, according to Serbian media, Mišković asked the US government to remove him from a so-called “blacklist”, a US Treasury list of businesses and people banned from entering the country or conducting business. The embassy claimed the document was false, as did Mišković and the Serb government.

But it became major news across the country, with B-92 and Blic running the entire document on the Internet. The letter has never been authenticated.

OCCRP examined every US Treasury Office of Foreign Assets Control report from 1994 until 2007. They show that Delta Bank was placed on the banned list in 1998 as part of sanctions over Kosovo. Delta was one of dozens of financial institutions from the former Yugoslavia and Serbia on the list, and there is no indication that Delta was singled out for special sanctions.

Delta was tentatively removed from the list in 2001 and was never mentioned again, according to OCCRP’s review. Still, the rumored document continues to be reported on in the local media when Mišković’s empire is discussed.

Serbian National Bank Responds to CIN-Serbia Story
Universal Bank's Silent Majority
Out of Options: How One Man Came to Dominate Serbia's Grocery Business
From Belize to Belgrade, a River of Cash