The investigation was based on the social media accounts of Uulkan Turgunova, the wife of Raimbek Matraimov, Kyrgyzstan’s former deputy chief of customs. Among friends and on social media, Turgunova goes by the name “Amanda.”

Between 2015 and 2019, Turgunova posted multiple collages on Instagram and the Russian social network Odnoklassniki showing her and her children at the Karven Four Seasons resort.

We know where these photos were taken because she added the label “Karven 4-Season”: 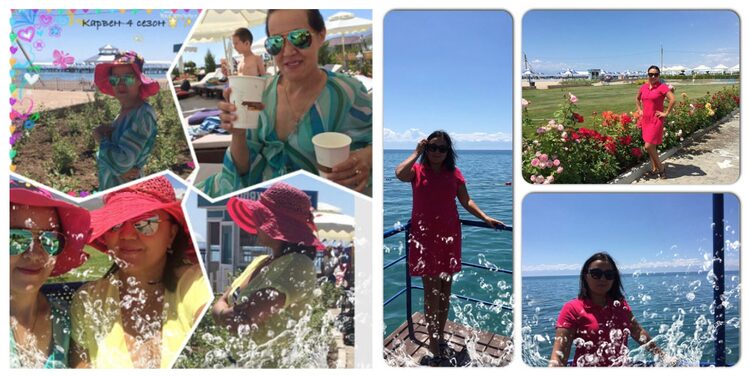 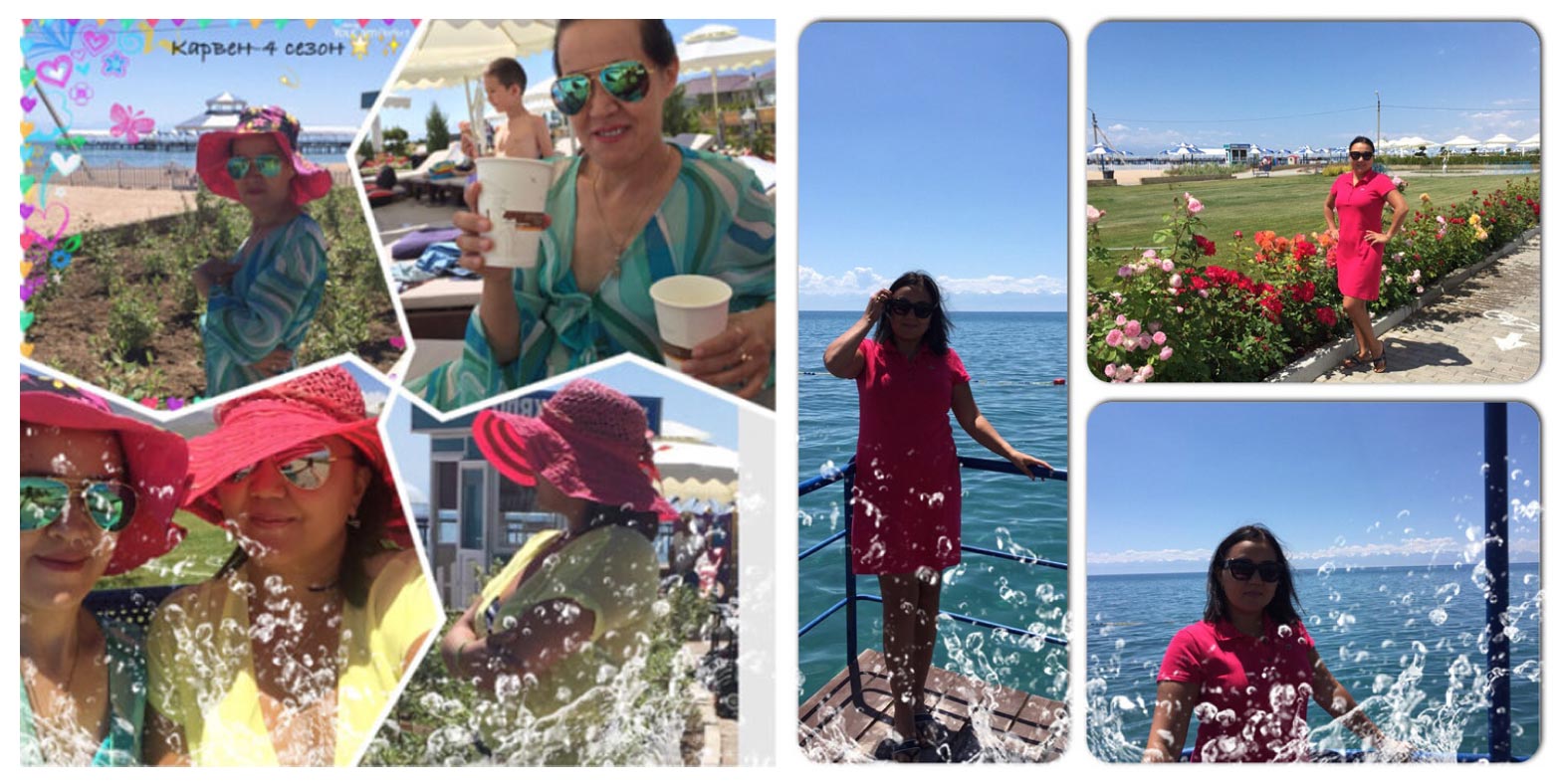 But are they just visiting the beach, or does the Matraimov family own one of the cottages at the Karven resort?

Some of Turgunova’s photos show her with a friend, Cholpon Mederova. The two women frequently appear in each other’s photos and exchange comments.

One photo posted by Mederova in August 2014 shows her posing with a pregnant Turgunova, with a caption saying “Thanks to Amanda for a beautiful vacation.” In another photo from the same summer, Mederova posts a photo of a boy surrounded by bicycles with the caption, “Amanda has a whole parking lot.” 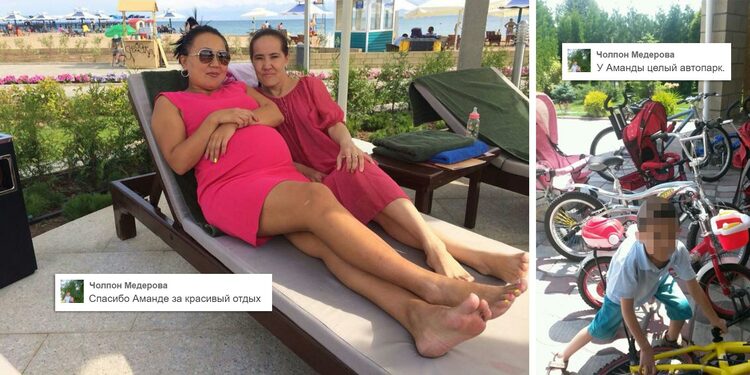 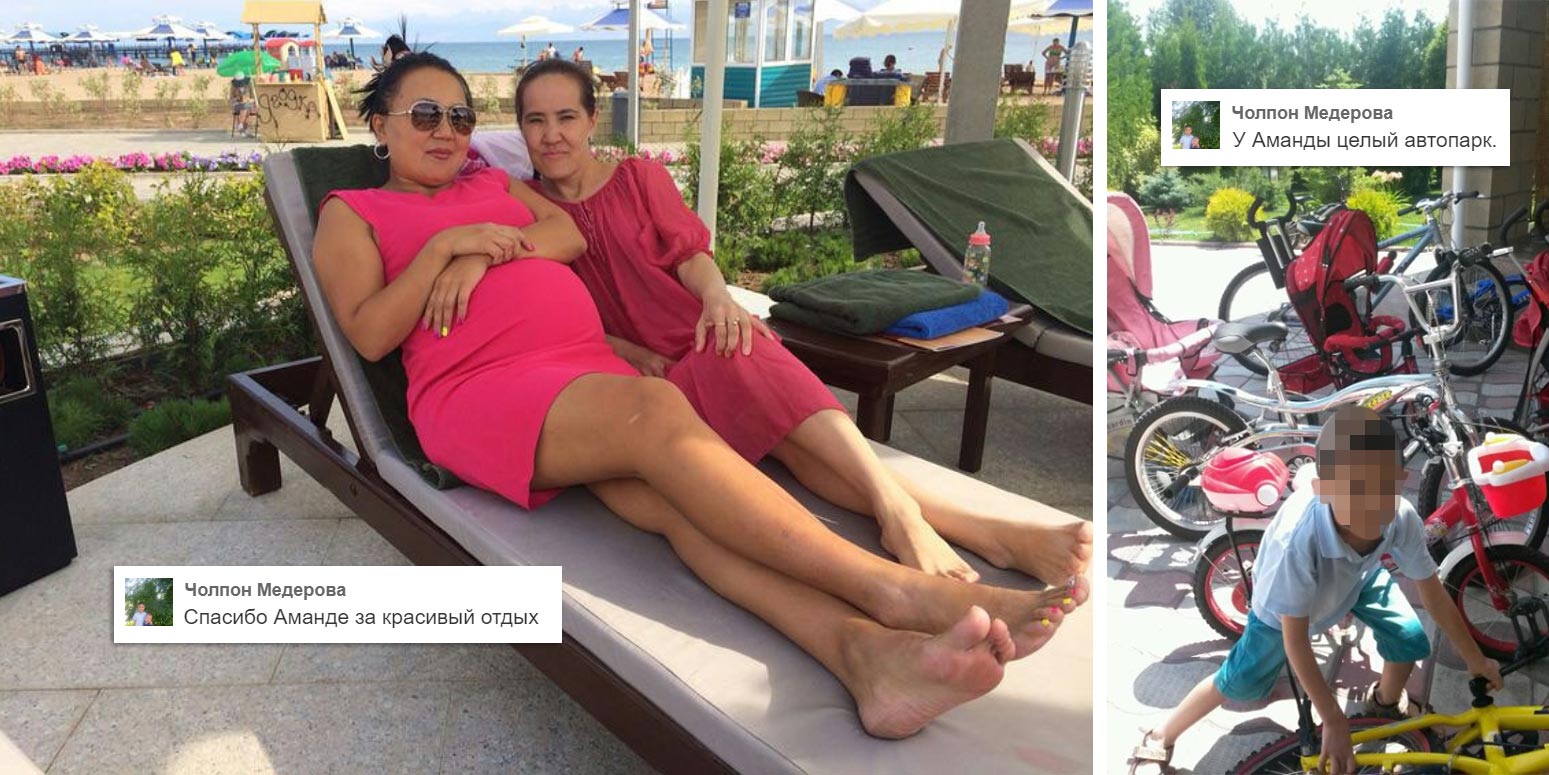 Both comments imply that Mederova is staying at a place she considers to be Turgunova’s.

A photo posted on Instagram by Turgunova last summer offers additional clues. The brick pattern is the same as in the photo posted by Mederova years earlier. The yellow bricks, the white arch, and the distinctive brickwork are identical to the architecture of a typical cottage at the Karven resort (pictured on the right from a real estate ad). Moreover, the glass wall installed under the white arch is a modification not common in rented cottages, leading reporters to suspect the cottage was owned by the family.

Now we know that Turgunova appears to have frequented one of the Karven cottages, and that she was unlikely to be renting it.

A satellite map of the resort from 2014 shows that half of the currently existing cottages had not yet been built. The left side of the image, in shadow, shows the still uncompleted houses.

Reporters focused on the cottages on the right side.

Another photo posted by Turgunova at the cottage, along with one of Mederova’s photos, provide an additional clue: a green hedge that surrounds the house. A screenshot from a drone video posted on YouTube shows that only a few of the Karven cottages are surrounded by greenery: 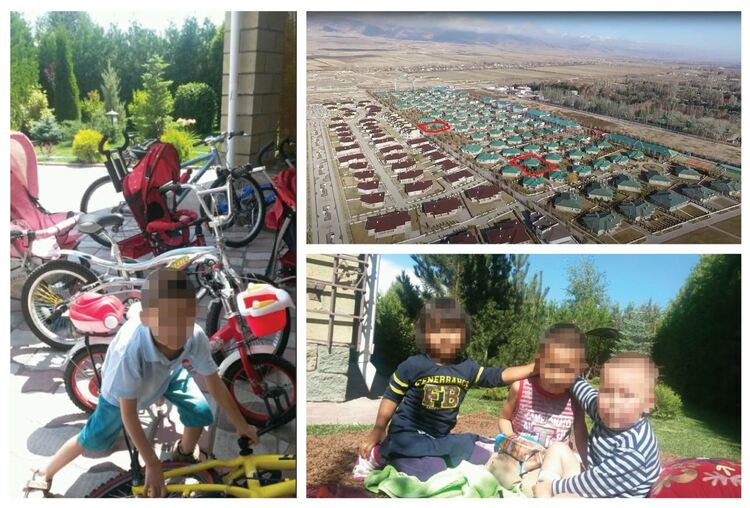 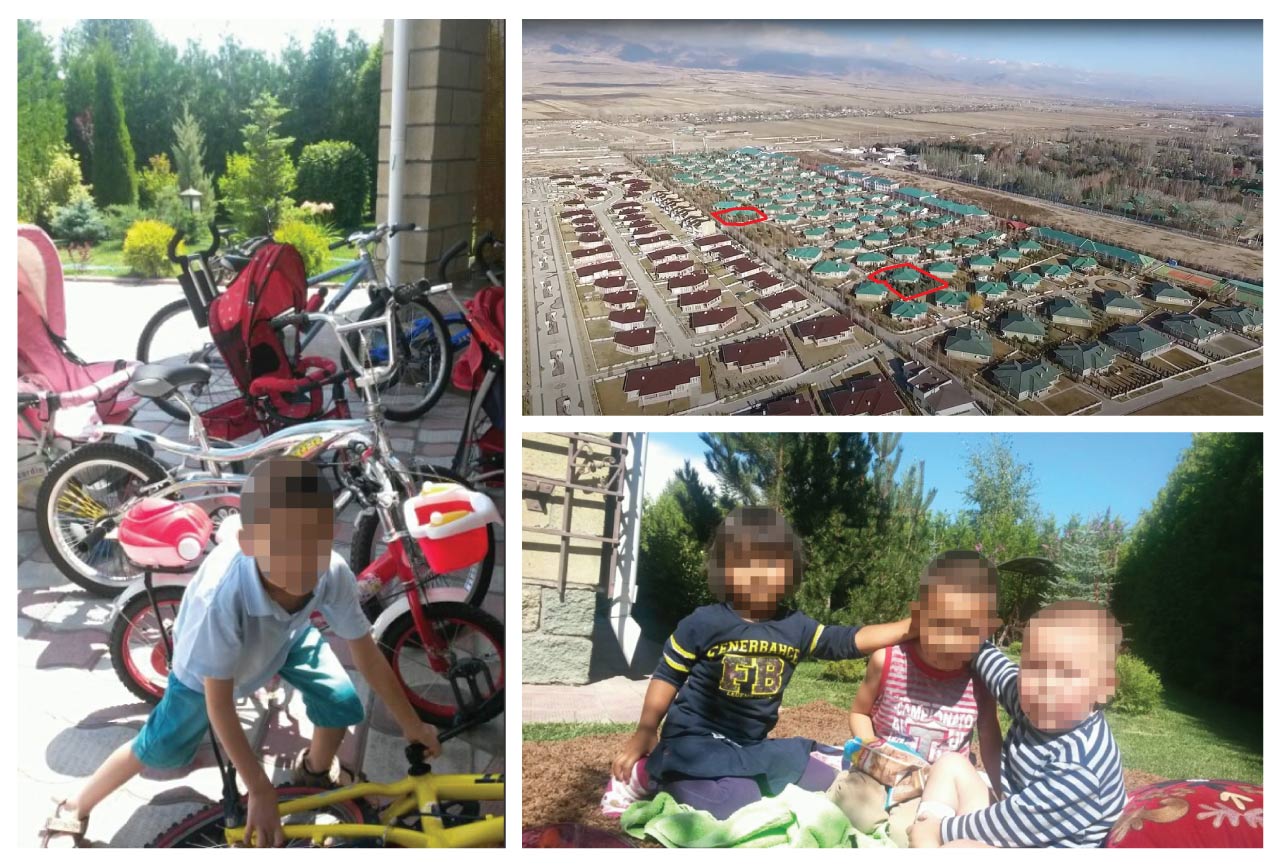 Examining a different drone video, reporters found that one of these cottages is clearly surrounded by a similar-looking hedge, making it a likely candidate to be the Matraimovs’ property:

Finding this cottage on Google Maps, reporters found that its driveway, which is not directly perpendicular to the walls of the house, appears to match the Mederova and Turgunova photos:

Having identified the cottage, reporters requested land records, confirming that it belongs to the Matraimov family. It’s registered to Dinarkhan Alaichiyeva, the wife of Raimbek Maitraimov’s older brother Tilekbek Matraimov.

While reporters have not seen Turgunova posting from Karven since 2019, at least one member of the immediate family visited the resort this summer.

In June, a Twitter user posted that he saw Matraimov’s son Bakai driving an Aston Martin into the Karven resort. He also posted a photo of a Porsche Cayenne in the Matraimovs’ driveway. 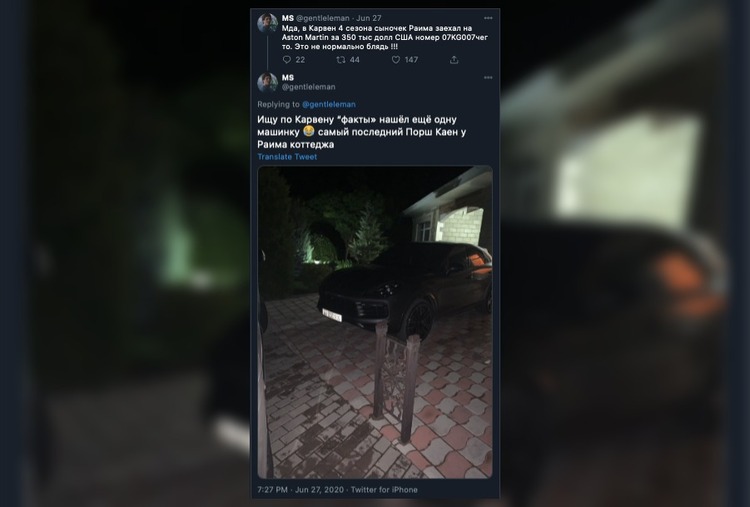 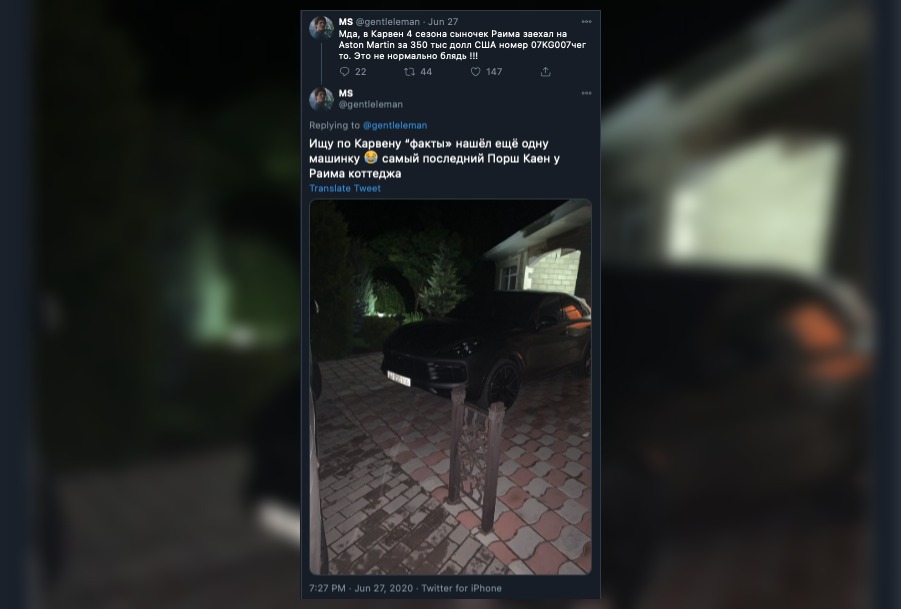 Credit: gentleleman/Twitter A screenshot from Twitter showing a Porsche Cayenne in what appears to be the driveway of the cottage the Matraimovs used at the Karven resort.

Read more: The ‘Beautiful’ Life of a Kyrgyz Customs Official.