In the autonomous Azerbaijani exclave of Nakhchivan, Vasif Talibov’s word is law. He has ruled over the isolated territory through fear and violence — even as his sons held millions in their Swiss bank accounts.

Yafez Hasanov, an Azerbaijani journalist, was on the trail of a horrific story: A young airport technician, accused of spying for Iran, had been summoned to the national security ministry only to turn up dead, and gruesomely disfigured, the following day.

But Hasanov’s reporting was abruptly cut short. Speaking from Germany, where he’s been granted asylum, he explained how the authorities in the autonomous Azerbaijani republic of Nakhchivan disposed of him.

Security agents bundled him into a car, drove him across the Iranian border, and released him there. He suspected their plan was to betray him to the Iranian secret services and fled for his life, heading for the Azerbaijani capital of Baku.

“I took four taxis,” he says. “I switched taxis so they couldn’t follow me.”

The plot sounds far-fetched. But a Nakhchivani security agent who fled the country the following year confirmed to Voice of America reporters that it had almost been carried out.

“The plan was to inform [Iranian intelligence] a few hours after the deportation that an employee of the American radio had come to spy on Iran. In that case, the Iranian intelligence would arrest and execute him,” the agent said. “Then someone changed [the department head’s] mind. I heard he got a call from Baku.”

Hasanov’s cross-border odyssey took place in 2011, but little has changed since. The Autonomous Republic of Nakhchivan is still ruled by brutality — and a wide gulf still separates it from the rest of Azerbaijan.

This mountainous, isolated exclave is cut off from the rest of the country by a strip of Armenian territory. Its residents are Azerbaijani citizens, and prominent Nakhchivanis are well-represented in their nation’s corridors of power. But it is ruled as a kind of private fiefdom by Vasif Talibov, a one-time manager in a Soviet garment factory who was lifted out of obscurity by Heydar Aliyev, Azerbaijan’s first post-independence president. 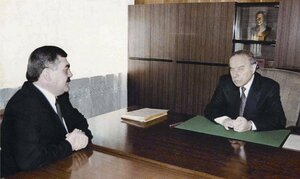 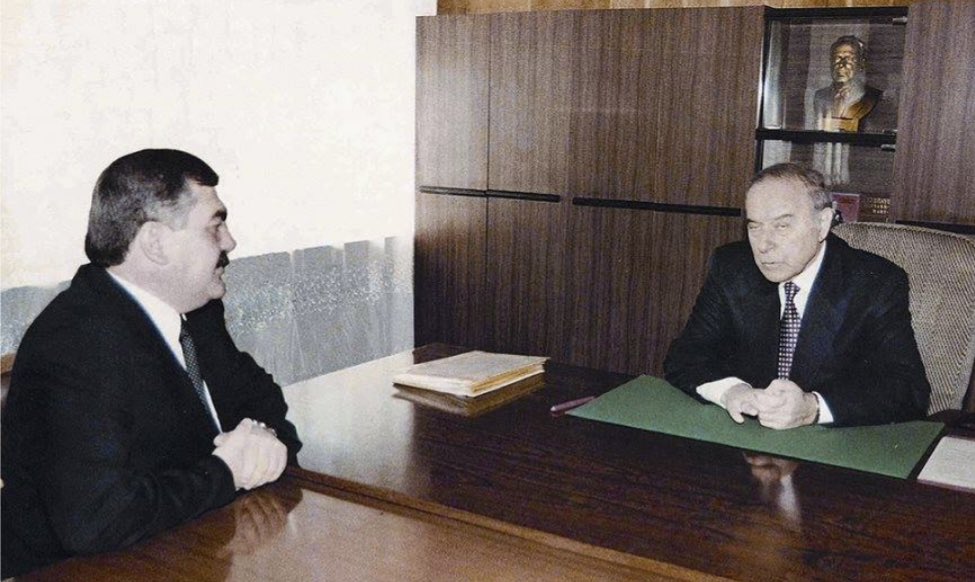 “Aliyev gave Nakhchivan as a gift to Talibov,” says an Azerbaijani human rights activist who has fled the country. “Baku has basically no authority there.”

Left largely to his own devices, Talibov has built a regime that rivals North Korea in the opacity, brutality, and arbitrariness of its rule.

Talibov and his family have a stranglehold on local business. State workers must spend their Saturdays cleaning the streets or harvesting vegetables. And locals say that the territory has emptied, with a huge proportion of Nachchivanis seeking greater freedom and economic opportunities in mainland Azerbaijan and Turkey.

Talibov’s sons received over $20 million in suspicious wire transfers in foreign bank accounts, even as the people of Nakhchivan suffered under their father’s dictatorial rule.
Read more

News of these abuses has trickled out over the years, but up-to-date information is hard to come by: The last prominent human rights report about Nakhchivan was published by the Norwegian Helsinki Committee in 2010.

Little of what goes on day-to-day is known, even in the rest of Azerbaijan.

“There’s almost no news coming from Nakhchivan,” says the exiled human rights activist. “They’re on their own. Whatever is happening there is completely obscure. Whoever wants to travel there — I’m talking even local Azerbaijani journalists or human rights defenders — they’ve been deported, kidnapped, badly beaten.”

The territory is a no-go zone even for some Azerbaijani ministers and other senior officials from the capital.

“The head of the central bank traveled there,” the activist said. “He was not allowed [to visit]. He was kept for five hours, and he just took a taxi, got on a plane, and returned to Baku.”

Even a member of the Azerbaijani parliament who represents Nakhchivan has learned better than to criticize Talibov’s rule. “He was accused of sticking his nose in the domestic affairs of Nakhchivan,” the activist said. “Imagine, the MP from Nakhchivan!”

Credit: president.az Special Forces of the Nakhchivan Army take part in a victory parade in the Azerbaijani capital of Baku after the country’s victory over Armenia in the 2020 war.

To hear locals tell it, Nakhchivan’s ruler is not a sophisticated man. Hasanov, the deported journalist, recalled an episode when a speech prepared for Talibov included a reference to the 21st century, written as “XXI.” When Talibov read it, he pronounced the letters individually as “X-X-I.”

But though Talibov may not write his own speeches, he has shown a penchant for micromanaging the lives of Nakhchivanis. In 2017, he signed an order listing 30 works of literature as required reading for the territory’s youth. 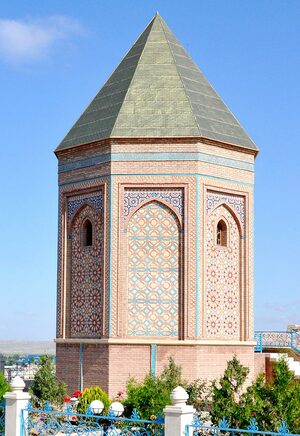 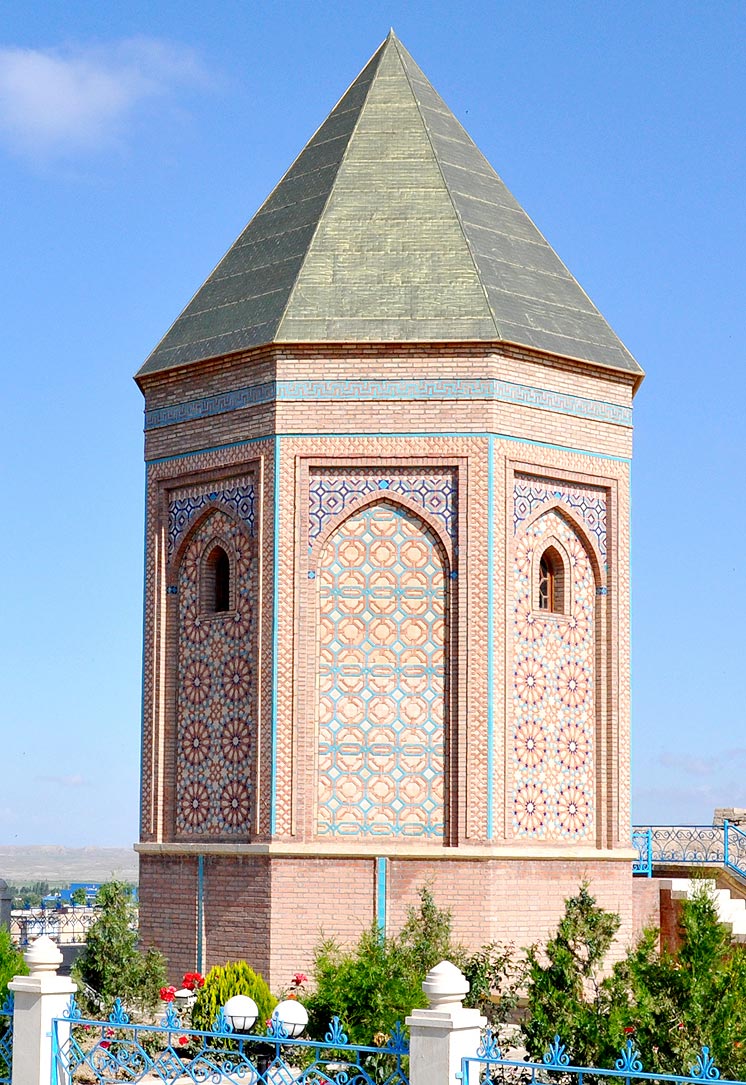 Credit: Toghrul Rahimli (CC BY-SA 4.0) The Tomb of Noah in the city of Nakhchivan is one of the territory’s top tourist attractions. The biblical prophet’s ark is said to have come to rest on a nearby mountain after the Flood.

He has also reportedly banned people from hanging laundry on balconies or baking bread at home in traditional “tandir” ovens. Strict dress codes dictate how women employed by the public sector may dress: no colorful tights or blonde or red hair dyes are allowed.

There’s also the widely despised iməcilik, a holdover of the Soviet subbotnik, when people were encouraged to “volunteer” to clean up trash or do other unpaid labor on Saturdays.

In Nakhchivan, though, the work is mandatory for public employees, takes place every Saturday — and can involve harvesting produce for Talibov and his family.

“Subotnik. You know what that is?” Hasanov, the deported journalist, said. “That is slave labor.”

“On the weekend you should stay home, have free time. But there, they have to work for Vasif Talibov … the teachers, doctors, everyone.”

These bizarre demands are some of the only news items from Nakhchivan that are reported in the outside world, often treated as a kind of curiosity.

But for most locals, the more relevant reality is deep, grinding poverty.

Believable numbers are impossible to come by. The official statistics claim, incredibly, that Nakhchivan has almost no unemployment. But independent observers say that most Nakhchivanis barely make ends meet.

“There is no life there, economically,” the exiled activist said. “There are no factories … There is no operational work in them … Or you have to give a lot of bribes to work there, and there’s no guarantee they keep you.”

As a result, the territory has emptied. Though the official population count is nearly half-a-million according to the last Azerbaijani census, locals say the real numbers are starkly lower.

Hasanov, the deported journalist, says that 70 to 90 percent of the population has left. This seemingly unbelievable figure was echoed by several others, including a prominent politician originally from Nakhchivan.

“Whoever finds an opportunity or any job or whatever, they run to Baku,” says the exiled activist. “In Istanbul … there are ‘Nakhchivan streets,’ loads of people from Nakhchivan who ran and found shelter and work, and ended up living there.”

“It’s not only because of low salaries,” Hasanov says. “But also because of the dictatorial regime. People don’t feel free.”

Petty corruption is ever-present. Police offers throughout the territory enjoy the impunity to terrorize citizens and demand bribes.

“The police enjoy carte blanche to intimidate, extort money and commit all kinds of violent acts against ordinary people,” said a local university professor in an interview with the Norwegian Helsinki Committee for its 2010 report. “No one ever holds [them] accountable for such misdeeds and ill-treatment.”

The organization’s report, which calls Nakhchivan “Azerbaijan’s Dark Island,” also describes a litany of abuses against anyone who dares to criticize Talibov’s all-consuming regime. This can include loss of employment — or much worse.

“Beating with truncheons, use of electric shocks, pulling out nails, asphyxiation with gas masks, and sexually demeaning methods are widely used,” the report says. “A former prisoner said he was kept in a penitentiary … under the common yet vague accusation of having ‘resisted the police.’ He was left for six days without food and hung from his legs when he refused to make a forced public confession of a crime that he was not involved in.”

The exiled activist mentioned a case, also cited in the report, when the authorities cracked down on a village called Bananyar after clashes between locals and police.

“There were eyewitnesses [who said] that the minister [of national security] himself was peeing on detainees. Some of them were forced to lay in the snow and he was peeing on them. He was forcing someone’s son to pee on his father.”

There’s no reason to think that such abuses have waned in recent years.

In the last few months, information from Nakhchivan has been trickling out through a new project — a Facebook page called Gündəlik Naxçıvan (“Daily Nakhchivan”) — run by an anonymous exile.

Just last month, the page posted a story of a local resident, previously tortured by the local police chief, who was summoned for questioning after voicing public criticism of the regime.

“[He] was… one of the two policemen who tortured me,” the local man said. “He personally hanged me and beat me until I lost consciousness. Now he says that if I continue to criticize Nakhchivan, it’ll be the same. [He] will repeat the torture.”

For the foreseeable future, such anonymous efforts will be the only way of learning what’s happening in Talibov’s territory.

Hasanov, the journalist who was deported to Iran in 2011, initially continued reporting on the territory for the Azerbaijani service of RFE/RL from the relative safety of Baku. But even there, he says, he and his family were hounded by Talibov’s agents.

“I was offered a lot of money to stop my work,” Hasanov says. “But I rejected them all. And then they said, it will become worse for you. You will be killed, and your family.”

He fled the country at the end of 2014, just a day after RFE/RL’s Azerbaijani bureau was ordered shut.

Vasif Talibov did not respond to a request for comment.