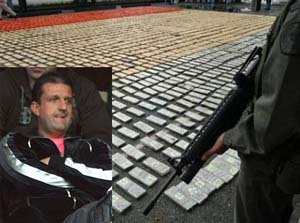 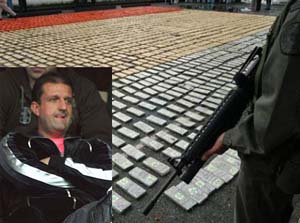 The address listed on Total Security System’s matches the Belgrade apartment of Duško Šarić, Darko’s brother. MUP did not specify in its reply whether the firearm licenses have been revoked. The police searched an apartment on Arsenije Čarnojević Boulevard in Novi Beograd in February 2010, and at the same time a neighboring apartment that police believe was owned by Darko Šarić. That apartment was sealed and impounded by the police.

According to the records of the Serbian Business Registtry, Total Security System was established on June 2, 2005 by Marko Šarić, who was born in Pljevlje in 1955. Pljevlje is the same small town where Darko Šarić is from but it is not clear how or if the two are related.

The company was registered at the same Arsenije Čarnojević address in June 2007. Phone records are in the name of Duško Šarić. The newspaper Blic published photos in March of a passage between the two apartments connecting them together.

According to documents received from MUP under the Freedom of Information Law, Total Security System was issued firearms licenses March 27, 2006 and September 19, 2007 allowing the firm to possess four guns with each permit. However, the police declined to release the document granting the permits even though it should be on file at the Novi Beograd police station. The Novi Beograd police referred reporters to the Police Bureau of Information, which cited privacy laws for not releasing the documents.

CINS observed security guards with Total Security insignias in several locations, indicating the firm appears to be still active in the security business.

Logo of the agency and the owner Marko Šarić.

The director of the firm is a former police officer, Danilo Odović, also born in Pljevlje in 1976. No one from the firm returned calls from CINS.

Also at the same address is a consulting company called Municipium S. According to law enforcement agencies and prosecutors, Darko Šarić took part in a number of privatizations in Serbia via the firm including the privatization of a number of hotels (check out CINS’s scheme of Šarić’s business here). The majority owners is a United States based company in the State of Delaware called Mateniko LLC. The same company also owns Šarić’s business in Montenegro via Pljevlje-based Mat Company. The minority owner of Municipium S company is Nebojša Jestrović, former director of notorious tobacco smuggler Stanko Subotić’s firm Futura Plus.

According to the records from the Serbian Central Registry of Securities, “Municipium S” owns a majority stake in the trading company “Forum-Plasman A.D.” and is also a minor shareholder in a Novi Sad bank Maestral Bank. Municipium S got rid of its shares in hotels Vojvodina and Putnik, but the president of the Boards of Directors in both hotels is Radovan Štrbac, who was arrested on February 8 and accused of laundering Šarić’s cocaine proceeds.