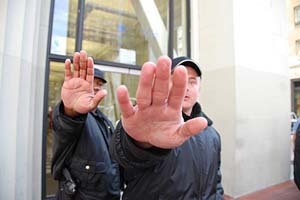 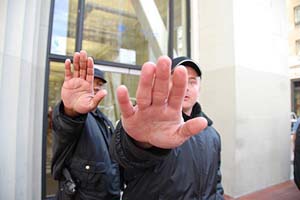 Reporters from the Organized Crime and Corruption Reporting Project (OCCRP) spread out across South East Europe to find out who really controls the industry. Researching court records, tax rolls, business registers and government contracts, the reporters found that some of the most powerful figures in organized crime hide behind security companies in order to arm thugs and intimidate their foes.

Killers, drug dealers and racketeers operate security firms with impunity across the region, often with the aid of political figures and police officers who are supposed to protect the public. Laws are weak, allowing gang leaders to hire and arm convicted felons who otherwise couldn’t carry a weapon. In Serbia, there are no laws at all regulating the security sector.

In Moldova, a minister was caught on tape rallying the heads of security companies to pressure and intimidate the population to back the communist party government. If not, they would lose lucrative government contracts. In Macedonia political parties directly control some security firms.

Security agencies are Bulgaria’s largest private employer – 130,000 people or one in 11 adult males in the country, work in security-related jobs. It’s also a haven for racketeers and enforcers who records show force their way into the very companies they are hired to protect, taking shares and money from owners by threatening their families and handing out beatings.

Perhaps no country has had more troubles with its security sector than Serbia. Dating back to the breakup of Yugoslavia when accused war criminal Arkan owned a security company he used to run drugs, gambling houses and kill rivals in the 1990s.

Today a new generation of criminals are doing much the same. A gang leader opened a security company just four months after going to jail for murdering Serbia’s prime minister. The government routinely gives gun permits to security companies run by mobsters; records show a security firm controlled by a man who tried to import 2.7 tons of cocaine into the country was twice given permission to arm its eight employees. Still, Serbian politicians have done nothing to curb these abuses, staying oddly quiet and possibly attesting to the power and influence of these private armies.

While aspects of the security sector differ in each Balkan country, there are common themes. Money, power and political influence are opening the door for crime bosses and making security firms more powerful.

Little is likely to change soon. Laws are weak or non-existent, and politicians have shown little will to change them in the face of opposition from some of the armed and dangerous figures who really control private security in the Balkans.