by OCCRP
Tweet this Share this on Facebook DONATE
Above: The Appleby building in the Cayman Islands, where Marina Sechina's company was registered. Credit: Arch and Godfrey

Marina Sechina was once married to the second-most powerful man in Russia. Her ex-husband, Igor Sechin, has been a devoted subordinate to Russian President Vladimir Putin for more than 25 years.

Since asset declarations began in 2008, Sechina had no personal income, no significant assets, and was not involved in any businesses until 2013. Now things have changed.

Sechin is important in Russia. When Putin became vice-mayor of St. Petersburg in 1991, Sechin was his chief of staff, and when Putin left St. Petersburg for Moscow in 1996, Sechin was quick to follow. “When I moved to Moscow, [Sechin] asked [me] to take him with me. And I took him,” Putin wrote in his autobiography, First Person.

Since then, Sechin has continued to follow every step Putin took up the ladder to power. From 2004 until 2008, he was deputy chief of Putin’s administration. When Putin headed the government in 2008, Sechin was appointed deputy prime minister. In 2012, he was appointed head of the oil giant Rosneft.

Sechin is not known as a friendly, jovial character. In fact, his ruthless, icy demeanor and ties to the secret services have earned him the media nickname “the Darth Vader of Russian politics.” Yet in modern Russia, his name can open many doors and solve many problems.

This can be both a boon and a burden to someone building a business empire.

After Sechin and his wife divorced in 2011, she might have concluded that his name was more help than hindrance because she did not take back her maiden name, sticking with “Sechina” instead. Like Coke, Kalashnikov, or other well-known brand names, it could be the most valuable asset in her rapidly growing business empire.

And yet, there’s a problem. For years, as a public servant, her ex-husband was required to disclose his and his wife’s incomes. Until 2011, Sechin reported zero income for his wife in his annual declarations (and no extravagant amounts for himself).

But after their divorce, Sechina started acquiring stakes in telecom, electricity, agriculture, and real estate companies in Russia. Though her name had never been associated with any major companies or other sources of income that would point to any large wealth, in 2013 alone she acquired stakes in a number of Russian companies that showed assets worth over €55 million (US$ 76.7 million) on their balance sheets by the end of that year.

And it wasn’t only in Russia. It appears that one of the first things Sechina did after her divorce was to establish a company in the Cayman Islands. Its purpose was to invest in a Russian real estate project run by businessman and banker Julius Meinl V, the heir of the global coffee empire, who expected investors to contribute tens of millions of euros. Meinl had previously been accused of defrauding investors.

Documents detailing Sechina’s Cayman business come from a massive leak of internal data from Appleby, a law firm based in Bermuda. The data was leaked to the German newspaper, Süddeutsche Zeitung, and shared with the International Consortium of Investigative Journalists (ICIJ), which organized a global collaboration with hundreds of media partners around the world, including the Organized Crime and Corruption Reporting Project (OCCRP).

It is not known whether the planned investments actually took place. Neither Sechina nor Meinl responded to requests for comment.

If Sechina reported no significant income before she joined the business world, where did she get the money for these plans?

It’s possible that she received a settlement from her husband after their divorce – but reporters found no large properties or other major assets in her possession in 2012 that would explain her ability to make significant real estate investments.

Her husband’s declared income in the years prior to her divorce was also not very large.

According to Appleby’s internal documents, the Cayman company of which Sechina was the ultimate beneficiary was called S Holdings Ltd.

The Cayman Islands lie south of Cuba in the Caribbean Sea, about 450 miles from Miami, Florida. Three hundred years ago, the notorious pirates Henry Morgan and Edward Teach, better known as Blackbeard, operated in these waters; it is believed their buried treasure is still secreted on the islands.

Secrecy and big money remained a Caymans specialty until recently, when the jurisdiction began to cooperate more closely with tax authorities around the world. But in terms of company ownership, it remains among the most popular and secretive offshore locations in the world.

In 2012, Sechina’s company was established with the help of officers from Austria’s Meinl Bank, part of the business empire of Meinl, the coffee heir. According to the Appleby documents, his bank managers intended for Sechina’s company to invest in Meinl’s real estate business, which specialized in Russia and Eastern Europe. But the files provide no evidence that the bank or Appleby ever inquired into the origin of Sechina’s money.

The proposed investment into Meinl’s businesses wasn’t cheap. A PowerPoint presentation and a plan to invite investors to join the project suggested possible amounts starting at €40 million ($55.6 million). This project marked the banker’s attempt to attract additional funding to his second try investing in Russian and Eastern European real estate.

Credit: Arch and Godfrey Appleby's office in the Cayman Islands, where Marina Sechina's company was registered.

The case began in 2002, when his real estate company, Meinl European Land, sold shares to the public and was listed on Vienna stock exchange. By 2007, the company had raised a total of €4.3 billion ($6.28 billion), mainly from Austrian retailers, as reported by Reuters.

But in 2007, the share value of Meinl European Land started to fall dramatically. According to Austrian prosecutors, a buyback had been organized in which Meinl European Land bought $2.4 billion of its own shares to artificially support its share price. In 2008, the company was sold.

In 2009, Julius Meinl was arrested on suspicion of fraud and breach of trust and was later released on a world-record bail of €100 million ($134 million). He has denied wrongdoing, and the investigation continued.

But according to the Appleby files, Meinl didn’t give up on the idea of investing in real estate markets. A couple of years later, he organized a complex scheme to invest in Russian real estate using companies from the Cayman Islands, the British Virgin Islands, Malta, and Cyprus.

That is when Sechina came in.

Day of the Grey Jackal

A PowerPoint presentation created by Fulcrum Ltd, one of Meinl’s companies, as well as a “briefing note” received by Appleby, spells out his plans. 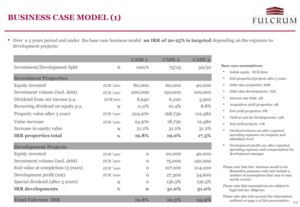 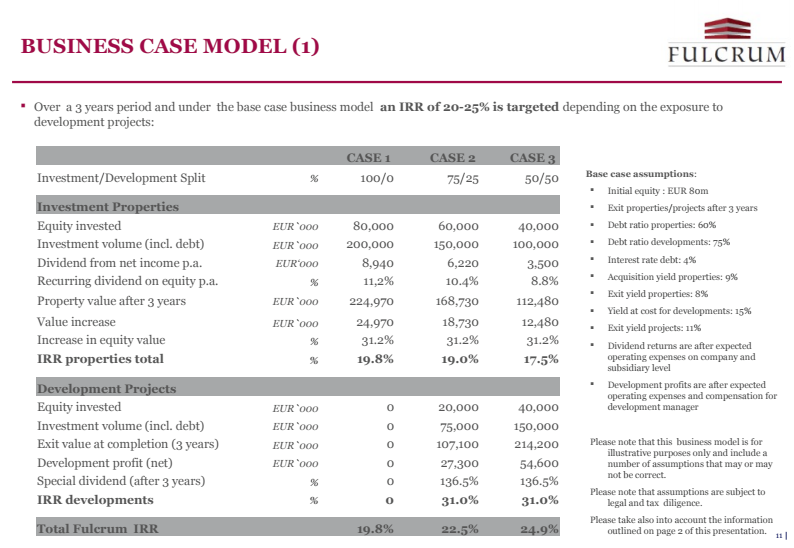 Fulcrum, which is registered in Malta, is described as “a platform for investment in emerging markets” and in Russian real estate in particular. It was owned by another company Meinl established in the British Virgin Islands called Gray Jackal Ltd.

According to the “briefing notes,” an investment fund from the Cayman Islands associated with several Meinl family trusts was to transfer the first €40 million ($55.6 million) through Gray Jackal to Fulcrum. Then a Russian company called Soyuz, owned by Fulcrum, was to buy part of an unfinished shopping mall in the Russian city of Ufa, a medium-sized town just east of the Ural Mountains some 845 miles east of Moscow.

But the Appleby files don’t disclose how much money, if any, Sechina ever actually invested in Meinl’s project. According to the presentation, he suggested amounts of €40, 60 or €80 million (US $55.6, $83.4 or $111 million) as an entry investment from each outside investor.

Fulcrum was looking to acquire distressed but promising assets, intending to buy them at a cheap price, to develop and sell with profit. The financial crisis had seriously reduced prices for commercial real estate. Many real estate companies have problems. And Fulcrum is aimed to get advantage from it, purchasing such companies or their real estate projects, the presentation said. 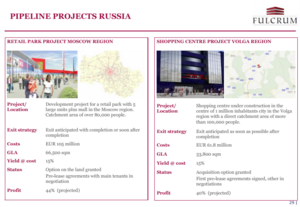 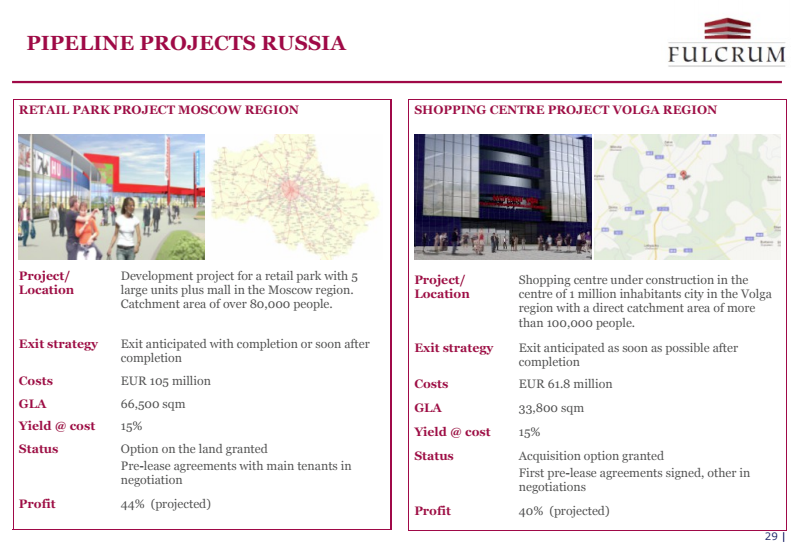 After many years of reporting no income, Sechina reported less than 9 million rubles, or about $280,000, in 2011 – the last year of her marriage. Typically, declarations of a spouse’s income do not indicate its source. Igor Sechin’s income for that period was also modest: about $360,000 from 2009 until 2011.

Even the couple’s combined income wouldn’t have been enough for the entry investment of €40-80 million in Meinl’s real estate project. It is unclear how Sechina could have come up with such a sum.

Being the ex-wife of the second-most powerful man in Russia made Sechina a “politically exposed person,” or PEP: a category that includes former and current officials and politicians, their relatives, friends, and ex-spouses. Banks and legal service providers like Appleby are obliged to conduct comprehensive analyses of companies and banking accounts which belong to PEPs to prevent money laundering, corruption, and tax evasion.

It’s clear from the documents that Appleby knew who Sechina was. But the documents show that officers of the law firm asked no questions about where her money came from.

In 2012, the Appleby documents show an acknowledgment that Sechina was a PEP – and that the investor indicated in the project had changed. Her Cayman Islands company was withdrawn from Meinl’s project and replaced by Summit Trustees (Cayman) Ltd, an even less transparent offshore structure which conceals the names of its real beneficiaries.

Julius Meinl was personally aware of these changes, according to Appleby files.

Summit Trustees (Cayman) Ltd. is a Cayman subsidiary of Summit Trust, a financial management firm that provides services to clients all over the world. The Cayman entity provides trustee services that hide the names of real beneficiaries – the people truly behind the company. This is a popular option among rich Russians.

For example, Summit Trustees (Cayman) Ltd was already used by the ex-wife of at least one other top-ranking Russian official. Olga Slutsker, once married to former Russian senator Vladimir Slutsker, held her London real estate through Summit Trust (Cayman), which was a trustee of her own trust.