A data leak from Appleby, a law firm based in Bermuda, sheds light on the business and real estate empire of Nenad Popovic, a Serbian minister found to be worth at least US$ 100 million – and possibly more.

Appleby declared Popovic and Politically Exposed Person or PEP and a “high risk.” The firm also dug deeper into his backround and noted his connections to notorious financier Marc Rich and his companies’ activities in Russia. The request was never completed after being scuttled at some point by one of the parties.

The minister is widely known in Serbia as “Russia’s man” in the government. In fact, according to media, one of his first meetings after being named to his post last June was with Russia’s ambassador to Serbia, Alexander Chepurin.

The Serbian People’s Party, which he founded in 2014, advocates closer relations between Belgrade and Moscow and opposes Serbia’s plans to join the European Union. Moreover, he built his business empire, controlled by his company, ABS Electro, in Russia.

Popovic’s Russia ties go back years. In 2008, he supported selling Serbia’s public oil company, NIS, to Gazprom, the Russian state-owned oil giant. According to his biography, he lectured at two universities in Moscow. And he recently told an interviewer that he is “proud” of the support he receives from United Russia, Russia’s ruling political party.

Popovic is minister-without-portfolio in charge of innovation and technology. It is not clear how he got the post, given that the Serbian government calls the country’s integration into the European Union (EU) a priority.

The Paradise Papers is a set of millions of internal documents and emails from Appleby, an offshore law firm, that were leaked to the German newspaper Süddeutsche Zeitung and shared with the International Consortium of Investigative Journalists (ICIJ), the Organized Crime and Corruption Reporting Project (OCCRP), Serbia’s KRIK, and 92 other media partners from 67 countries.

The papers relating to Popovic show that, despite his admiration for Russia and his career as a Serbian politician, he has been a legal resident and taxpayer in Switzerland since 2008.

They also show that he is very rich. Popovic has made no secret of his wealth, but the leak has, for the first time, made its extent clear. An audit by the accounting firm PricewaterhouseCoopers AG (PwC) discussed in the papers estimates his worth at least $75 million.

The documents show that he controls offshore companies registered in Cyprus and the British Virgin Islands (BVI), companies in Russia, and property in at least three countries.

They also indicate that, while Appleby was initially eager to help Popovic manage his empire, it appeared to stall and delay finishing the job after discovering more about his history and his associates. It is unclear from the leaked documents which side backed away although Popovic has claimed it was him.

According to the leaked documents:

But Appleby never finished the job. The leaked emails show that, after digging deeper into Popovic’s background, the firm found Russian media reports tying his businesses to shady characters and a famous corruption case. He was marked as “high risk” in Appleby’s records and, in 2015, expunged from a list of clients. 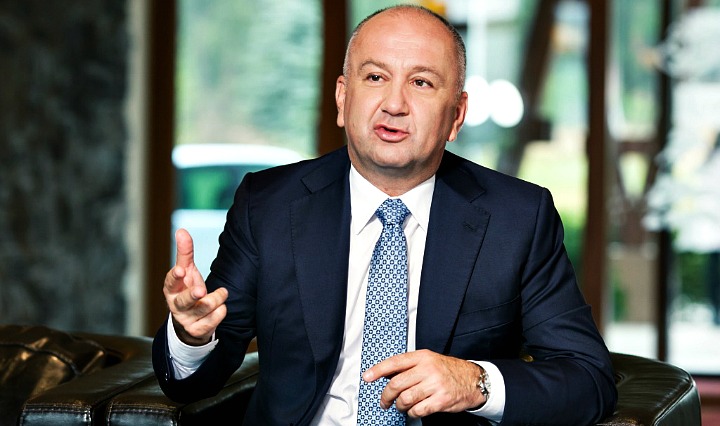 Popovic was vice-president of the National Parliament of Serbia when the first approach to Appleby was made on his behalf.

In an initial email correspondence, PwC’s Bezborodov didn’t name Popovic. Later they would identify him as “Mr. P,” though it’s clear from the emails that Appleby knew who their client was.

“Our client, of Eastern European origin but living and tax resident in Switzerland for many years, intends to transfer his wealth (operating companies and private real estate) into an asset protection structure,” Bezborodov explained.

A document he sent to Appleby, titled “Reorganization of Private Wealth Structure,” showed Popovic’s intention to create two offshore companies through which he would control his businesses and real estate assets.

Popovic wanted Appleby’s expertise in setting up companies on the Isle of Man.

Popovic also wanted to register a trust in Hong Kong that would hold the two Isle of Man companies, but only become active and take control of them after he and his wife died. The trust would ensure that his family members would inherit his wealth after his death.

“The client dislikes trusts, as during lifetime he wants to actively run the business and is not ready to give up control to a trustee,” Bezborodov wrote. “We therefore came up with a combined structure” to meet his needs.

According to Andres Knobel, an analyst for the Tax Justice Network, these structures could be useful for two reasons: protecting assets from creditors and maintaining secrecy.

“Trusts are even better for asset protection purposes than the other types of entities such as companies”, Knobel said. “A protector can be used to ‘control’ the trustee’s discretion”, he said.

The trusts are useful for secrecy, too. “No one may know who owns a trust or what assets the trust holds, because trusts are hardly ever registered,” Knobel said. “Another part is that authorities or anyone else will never know [who] is behind the trust or other structures, in case the persons are involved in any illegal activity.”

In its emails to Appleby, PwC described the wealth of “Mr. P.”.

“For Swiss tax purposes, we assessed the overall value of the business assets at approx. 65 million [Swiss francs] (US$ 65 million),” one of the employees wrote. “The true and fair market value is probably considerably higher. [Popovic] is currently negotiating a sale of a division of the business and the base negotiation price was assessed at US$ 100 million.”

The company also estimated the value of his real estate in Russia, Serbia and Montenegro as at least 10-15 million Swiss francs ($10.7 - $16 million).

Not Your Average Politician

When Appleby researchers began looking into Popovic’s history, they found a number of controversies. Their findings led them to double down and look harder.

They discovered that Popovic was no ordinary client, but rather a politician who belonged on a special “politically exposed persons (PEP)” list. Legally, people designated as such require more extensive investigations, as they are connected to controversial or powerful figures.

“During these checks it has been highlighted that there are allegations that the client has not filed reports to the Anti-Corruption Agency,” wrote an Appleby agent in an internal email, referring to a 2011 report by Global Integrity, an NGO that advocates for transparent governance.

The report states that “three companies owned by Nenad Popovic signed 19 public contracts in 2010 and 2011, but failed to file [contract] paperwork [with the Agency].”

According to Serbian legislation relating to the Anti-Corruption Agency (ACA), state officials must report to the body when their companies participate in public procurement.

That set off alarm bells for an Appleby senior compliance officer, who wrote, “I notice that as part of the new structure one of the (Isle of Man companies) is set to hold the client’s operating companies – potentially they might be ones that were involved with the contracts that were not reported? … There is a risk for us, in that instance, that we might be involved with the proceeds of crime,” he wrote.

When OCCRP/KRIK reporters contacted the ACA, the agency said that it had taken no action against Popovic because they have no knowledge that his firms have concluded contracts with the state. But, it said, two other actions had been filed.

In one case, Popovic failed to transfer the management of his companies to a third party as required of public officials. The ACA filed a case against him in 2013, but after he provided documents proving that he had earlier transferred control to Irina Kharisova, a Russian citizen, the case was subsequently closed.

Khrisova had also been designated as a director of one of Popovic’s Isle of Man companies in the scheme he had been planning.

A second case against Popovic, regarding alleged illegal actions he undertook while privatizing a company, is ongoing. The ACA notified prosecutors about potential violations in 2014, but no decision to open an investigation has yet been reached.

As for the one mentioned in the Global Integrity report, PwC told Appleby that Popovic had been cleared and that “no formal court proceedings were taken.” Appleby was still suspicious.

They were also concerned because his companies were registered in Cyprus. “A particular feature of illicit money laundering activity conducted in Serbia is via investment into real estate and money flows through Cyprus.  A part of this particular structure is apparently investment in property which is held by company’s incorporated in Cyprus”

At one point they note that Popovic had made his fortune from state-run projects in Russia.

Early in his career, in 1995-1996, he worked for the late Mark Rich, the owner of the Glencore Group, who died in Switzerland in 2013. Popovic opened a representative office for Rich in Moscow and was president of a company that partnered with Glencore.

Glencore is a major commodity trader with a history of controversial dealings, including doing business with apartheid South Africa and trading in Iraqi oil in violation of UN sanctions. Rich fled to Switzerland to escape charges of tax evasion, racketeering, and dealing with Iran even as it held American hostages. He was infamously pardoned by President Clinton as one of his final acts in office.

“Mr. Rich was previously indicted in the US for tax evasion and trading with Iran (Glencore),” Appleby wrote in an internal report. “It is noted that in this same period [Popovic] was apparently associated with Mr. Rich and he was also the President of Koalko International, which entered into contracts with Glencore.”

Its subsidiary, Harvintеr, was involved in the construction of “Putin’s Palace,” an Italianate mansion on the coast of the Black Sea which had allegedly been funded by improper use of state funds, according to the internal Appleby report.

Appleby also noted another controversial Popovic connection in Russia which had been exposed by OCCRP partner Novaya Gazeta.

The newspaper reported that Popovic’s Harvinter was a subcontractor hired to help build facilities for the 2014 Winter Olympics in Sochi. It is alleged that over half of the $51 billion used in the resort’s construction disappeared, with some going to bribe top Kremlin officials who had influence over tenders.

A criminal investigation was launched into allegations that Vladimir Leshevski, an official working for the presidential administration, had received bribes, but was never convicted. Leshevskiy’s son worked as a director in Popovic’s company, ABS Constructor.

In an Feb. 17, 2015 email, Appleby’s assistant manager told his colleague that the Popovic case “can be closed.”

The Serbian government did not find Popovic too high risk to be appointed minister. After he took on the role, he did report the Cyprus and BVI-based companies mentioned in the leaked documents to the state ACA, as OCCRP/KRIK reporters saw in his file.

OCCRP/KRIK journalists contacted Minister Popovic for an interview a month ago. His chief of staff answered that Popovic was on a business trip and was too busy to meet. Ten days ago reporters sent him questions which he never answered.