Wringing Profits from the Russian Railways

Aleksey Krapivin, the son of a close associate of Vladimir Yakunin, the former president of Russian Railways, runs a business empire built with state contracts that control several hundred million rubles in government funds spent on railroads in Russia.

Details about these and other transactions are buried in the Panama Papers, an internal database maintained by Mossack Fonseca, a Panamanian legal firm providing offshore tax havens for clients who want to hide their identities and/or holdings.

The data was obtained by the German newspaper Süddeutsche Zeitung and shared by the International Consortium of Investigative Journalists with the Organized Crime and Corruption Reporting Project and more than 110 media partners from 82 countries.

One of those partners is Novaya Gazeta, which has dug into the details of the Krapivin’s offshore empire. Aleksey Krapivin is the son of Andrei Krapivin, who was reported to have died in 2015, although his death has never been officially confirmed.

According to the documents, Aleksey Krapivin controls the largest contractor on the Baikal-Amur Mainline (BAM), the biggest, most expensive construction project in the Russian Railways system. The 2,671-mile (4,300 km) BAM runs north of (and parallel to) the Trans-Siberian Railway.

Companies affiliated with Aleksey Krapivin are also involved in suspicious transactions with a major Russian Railways partner, Bombardier Transportation, a global giant in the field of transport.

A Decade of Business

The Krapivin family has played a major role in Russian Railways since 2005, when Yakunin, known as family friend, took over the top railway job. But the scale of Krapivin’s involvement in public procurement has gradually become more clear since 2010.

The elder Krapivin was not a public person. He did not respond to media inquiries, he didn’t attend high-profile social events, and virtually no photos are available in the public domain. When he applied for Russian Railways tenders, he did so through shell companies, and he owned assets in Russia through offshore companies.

His son Aleksey has long played a key role in the Krapivin business empire. Documents in the Mossack Fonseca trove reveal a part of the Krapivin family’s hidden offshore empire. While they don’t reveal the true extent of the network, they show what kinds of deals Yakunin’s friends made as they built their fortune.

In 2014, Reuters received data about bank accounts for a large number of companies that between 2007 and 2010 won public contracts worth billions of dollars from Russian Railways. The Reuters investigation revealed that some of these companies didn’t perform the work they were supposed to; some of the money was funneled offshore; some was deposited in banks, and only some went to actual companies that performed the work for Russian Railways.

The data that Reuters received came from Russian banker German Gorbuntsov, who fled Russia after a conflict with his business partners. He claimed that all of the companies were controlled by one group of people, which was headed by Andrei Krapivin. Gorbuntsov was later shot in London in a complex affair that involved Moldovan crime groups, Russian politicians and the Russian Railways.

The Reuters investigation showed that most of the companies that won Russian Railways tenders for millions of rubles couldn’t be found at their legal addresses, while the true owners hid behind dummy directors that had no clue about the companies. One of the fake founders confirmed that the actual owner of the companies was Andrei Krapivin.

Also in 2014, the Russian web portal Slon.ru analyzed all the tenders from the Russian Railways website in 2012 and 2013, and calculated that in just those two years, the companies controlled by Krapivin and his partners could have received as much as 120 billion rubles (nearly US$ 3.7 billion) from the state.

The Mossack Fonseca documents connect Aleksey Krapivin to at least 11 companies in Panama, the British Virgin Islands and the US state of Delaware, all jurisdictions popular with those seeking to evade taxes or hide their wealth.

It isn’t clear what all of the companies do, for example those registered in the US. But others conduct commercial activity with some of the world’s largest and best-known corporations.

The Canadian company Bombardier Transportation is a major global producer of trains and airplanes that is traded on the Toronto Stock Exchange. As with many global corporations, it is proud of its high ethical standards.

The company didn’t just sign the UN Global Compact that demands the world’s corporations fight corruption while respecting the environment and human rights, its ethical code also applies to suppliers.

In theory, only companies that share Bombardier’s values can be its partners. But the values of Bombardier, like those of many other multinationals, are put to a difficult test in Russia. The Mossack Fonseca data indicates Russian Railways and Bombardier’s joint venture was involved in questionable deals with offshores affiliated with Aleksey Krapivin.

Bombardier Transportation is a corporation that supplies a microprocessor interlocking system for railway switches and signals called the Ebilock-950. The company came to Russia in the mid 90s. By that time, Russia’s computing sector was lagging behind the rest of the world, and domestic developments in the field of automation systems were far behind foreign competitors.

The Ministry of Railways was looking for a partner that would supply microprocessors and also invest in Russian production of automatic traffic control systems. This partner ended up being Bombardier.

In 1996, together with Russian Railways, Bombardier created a joint venture Bombardier Transportation (Signal) Ltd. On Bombardier’s side, the founder was the Swedish subsidiary of Bombardier, which is named as the main producer of Ebilock-950 systems.

Over the past 15 years, the joint Russo-Swedish company installed Ebilock-950 systems in Russian railway stations with additional contracts in many former Soviet nations.

The production of Ebilock units is gradually being transferred to Russia. In 2011, the joint company bought a 50 percent (minus one share) stake in Elteza, which owns five factories that produce railway automation equipment. 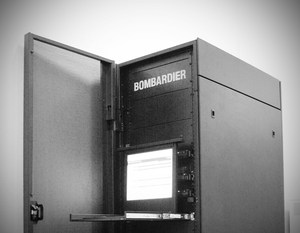 But some of the equipment is still being imported. And for some reason, the trail of equipment being imported from Sweden into Russia passes through the British Virgin Islands and the United Kingdom.

To Russia through Britain

Rambo Management sold Ebilock-950 equipment, produced by Bombardier Transportation, to Multiserv, which in turn was supposed to deliver the equipment to 13 railway stations in Azerbaijan connecting Baku with the Georgian border.

When the Azerbaijani government held a 2013 tender for the delivery of the Ebilock equipment, the winner was consortium of companies led by Bombardier Transportation. But works were also conducted by Russian joint venture.

So this means that in essence, the Bombardier Transportation might supply its equipment to Azerbaijan through at least two offshores, Rambo and Multiserv.

Multiserv was registered in London in 2010. According to its accounts, it is small company with offshore companies as shareholders, which several times was almost struck off for not providing annual returns. But there is an interesting thing connecting the small British company and Russian Railroads: the first director of the company was Yury Obodovsky, known as one of the key partners of the Krapivin family.

The routing of the trade makes no business sense and allows for unnecessary costs to be added or prices to be marked up for no added value. Selling products to yourself or close business partners is a technique often used in many countries to evade taxes, embezzle funds or launder money.

Ebilock-950 equipment apparently gets to Russia by a similarly serpentine path. From 2012 to 2014, the Russian branch of Bombardier Transportation (Signal) bought Ebilock-950 microprocessor centralization equipment from Multiserv for tens of millions of dollars. Additional money was paid to Multiserv by Bombardier’s affiliate Elteza.

OCCRP sought comment from the Russian and Swedish offices of the company but they refused to respond.

Billions of dollars in different pockets

Most of the other companies registered offshore are used by Aleksey Krapivin as his “wallet”, giving loans to various offshore companies, including funds to make purchases in Russia. The loans are not commercial, the interest rates are low, the borrower does not have a monthly sum to pay, the conditions for the loans are constantly changing, and the interest rates sometimes actually drop.

Similar activity can be seen in offshore companies affiliated with Sergey Roldugin, a close friend of President Putin.

“Each time a layer of secrecy is successfully peeled back, investigators are confronted with yet another layer of secret offshore entities, accounts and sovereign laws that must be addressed and overcome.”

Mossack Fonseca documents demonstrate that between 2012 and 2015, more than 200 million dollars passed through companies controlled by the Krapivin family. And some of the loans are quite interesting.

In May 2014, the Krapivin company Gordox Corp. loaned US$ 100.5 million to Evling Business Inc., registered in BVI, for the purchase of Sterema Ltd. At the same time, Sterema took control of the Russian company Bamstroymekhanizatsia, one of the primary contractors on the Russian Railways’ massive Baikal-Amur Mainline project.

From Siberia to the British Virgin Islands

In 2013, Putin approved the plan for the reconstruction of the Baikal-Amur Mainline and the Trans-Siberian railway, one of Yakunin’s most grandiose projects.

The total cost was to be 562 billion rubles (US$ 17.2 billion). All the funds come from the state budget.

When tenders were offered in 2014, the largest Russian Railways contract in history was won by a consortium led by the management company Bamstroymekhanizatsia, with most of the work to be performed by a joint-stock company with the same name.

The joint stock company has a more than 40-year history. For a long time the company belonged to the founder, Vasily Tarasenko, but right before it took part in the largest Russian Railways tender ever, it changed owners. Now the ultimate owner of the largest construction company in Russia that receives millions from the state budget is obscured offshore.

The controlling stake is owned by Cyprus-based Sterema Ltd., which in turn belongs to Evling Business Inc., registered in the British Virgin Islands. The ultimate owner isn’t known, but according to the Mossack Fonseca documents, Evling received the money for the purchase of Sterema from Krapivin’s company Gordox. Krapivin is also affiliated with several other companies that control contractors on this project.

How Krapivin controls the BAM project

In reality, Krapivin’s role in the BAM construction could be even larger. Two other companies are also contractors (Energomontazh and Transstroymontazh), and they are owned by companies from Cyprus. At various times Krapivin was co-owner of almost every one of them. But then their ownership was transferred to more closed jurisdictions — British Virgin Islands, Belize or Panama. The Mossack Fonseca documents don’t show the ultimate owners of these companies.

Reporters repeatedly sought comment from Krapivin, but his representatives declined to make him available.