Over the past 13 months, at least 68 cargo flights from Serbia, Slovakia, Bulgaria and Czech Republic have carried thousands of tons of munitions to Saudi Arabia, the United Arab Emirates (UAE) and Jordan, three key suppliers of the Syrian rebels.

The most recent airlift was on July 4, 2016, with the largest number of flights originating from Belgrade, the capital of Serbia.

Cargo flights from Central and Eastern Europe to the Middle East, and particularly military bases, were extremely uncommon before late 2012, when the upsurge in weapons and ammunition purchases began, according to EU flight data and interviews with plane-spotters.

The frequency of the cargo flights – on average one every six days – reveal a steady flow of weapons from Central and Eastern Europe to military bases and airports in Middle East, BIRN and OCCRP’s analysis shows. Eleven different cargo carriers were used with Ruby Star Airways from Belarus, accounting for almost half of the flights. The most commonly used aircraft - the Ilyushin II-76 - can carry up to 50 tons of cargo or approximately 16,000 AK-47 Kalashnikov rifles or three million bullets. Others, including the Boeing 747, are capable of hauling at least twice that amount. 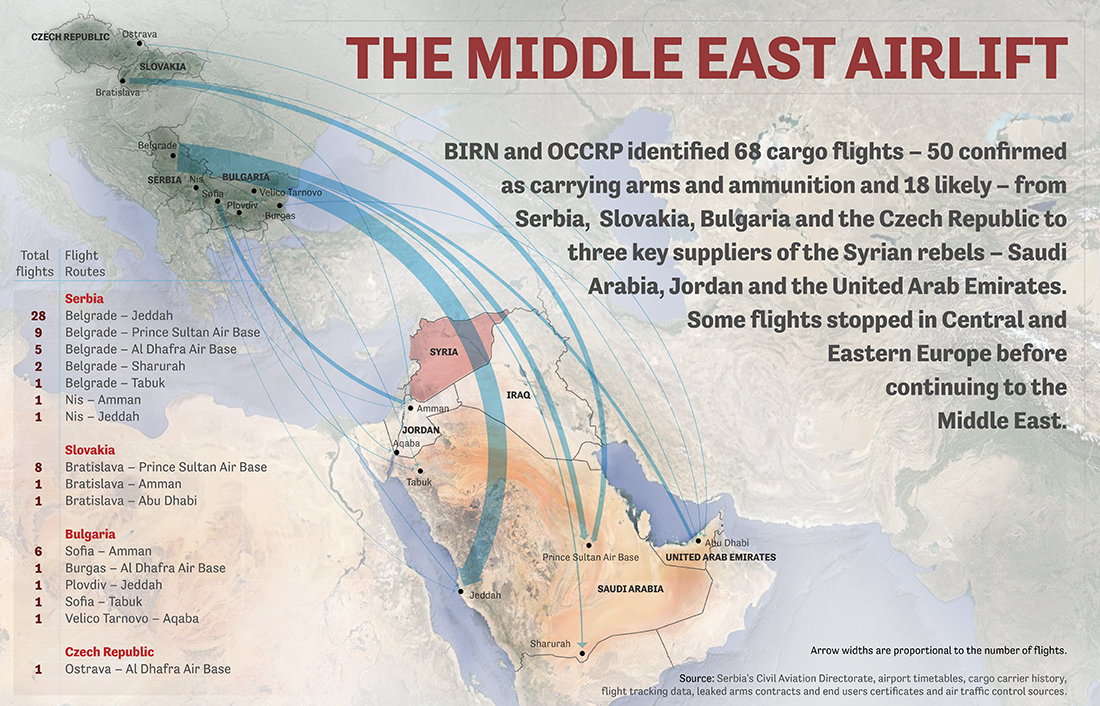 Of the 68 flights identified, 50 were officially confirmed to have carried arms and ammunition:

An additional 18 flights were identified as very likely to have been carrying arms and ammunition based on one of three variables: the air freight company’s history of weapons supplies; connections to earlier arms flights; or a destination of a military airport: