The Black Sea Route to Syria

by Lawrence Marzouk and Ivan Angelovski
Tweet this Share this on Facebook DONATE
Above: A ship carrying ammunition bound for Turkey and Jordan was observed by reporters in Burgas, Bulgaria in September 2016. Credit: Ivan Kolev, BIRN

The dozens of vast metal containers being loaded onto the MV Norfolk barely stood out amid the bustle of Bulgaria’s busiest Black Sea port on September 22, 2016. But the orange explosive warning signs on each box being carefully craned from the quayside of Burgas’ docks suggested the shipment was far from routine.

The commercial cargo ship was commissioned by the Pentagon’s Special Operations Command (SOCOM) to haul 1,600 tons of ammunition to Syria’s neighbors Turkey and Jordan, and from there almost certainly on to US-backed rebels fighting the Islamic State (ISIS).

The September shipment was the fourth of its kind in less than 12 months that together transported some 6,300 tons of Eastern Bloc weapons and ammunition from ports in Constanta in Romania and Burgas in Bulgaria to the military ports of Aqaba, Jordan, and Agalar, Turkey, according to procurement documents, ship tracking data, and two cargo lists obtained by the Balkan Investigative Reporting Network (BIRN) and the Organized Crime and Corruption Reporting Project (OCCRP).

Weapons and ammunition were delivered to the ports from across Central and Eastern Europe, mostly by truck.

The transportation operation is part of one the Pentagon’s biggest buy-ups of Soviet-style weapons in its history – as much as $2.2 billion by 2022 – as it seeks to arm Syrian rebels fighting the Islamic State. 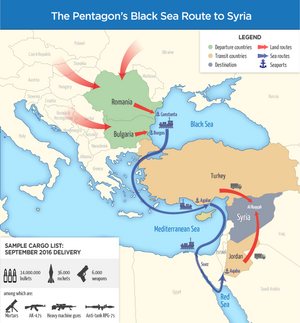 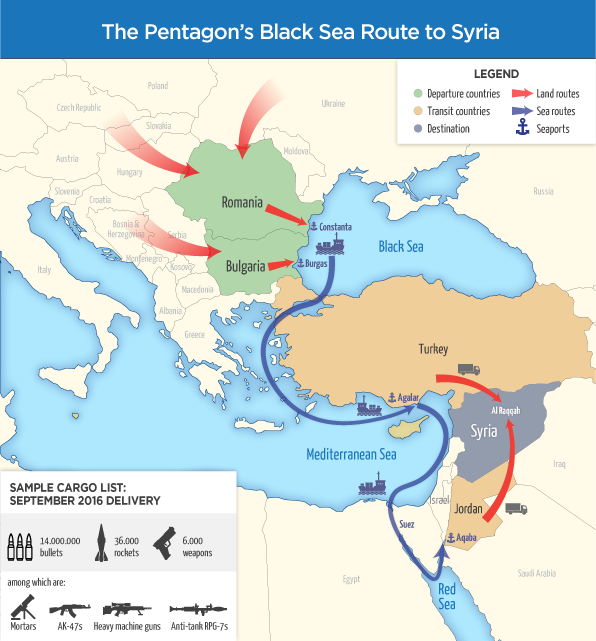 While SOCOM admits to having commissioned the ships, it refused to confirm the weapons’ final destination. However, the only groups in the region SOCOM is currently supplying with large volumes of Soviet-style weapons are Syrian rebels in the north (through Turkey) and in the south (through Jordan).

The Pentagon told BIRN and OCCRP that in 2016 it delivered equipment to “vetted Syrian Opposition” groups in 20 airdrops, 100 cargo flights, and 500 truckloads. It added that the pace had increased as efforts to retake Raqqa, the so-called capital of ISIS, had been upped.

The sea route is not the only one the Pentagon has been using to transport arms and ammunition to Turkey and Jordan, and from there to Syrian rebels. The US airbases at Mihail Kogălniceanu airport in Constanta, Romania, and Ramstein in Germany were also key delivery points, according to the Pentagon’s internal correspondence and a contractor speaking on condition of anonymity.

“The corridors of MK (Mihail Kogălniceanu) are piled high with SOCOM deliveries which are due to be exported,” the contractor said, adding that on some occasions, they were expected to charter their own cargo planes for delivery.

Romanian arms export reports for 2016 and the first quarter of 2017 confirm that authorities in Bucharest have approved five licenses for Eastern Bloc weapons and ammunition to transit from Bulgaria and Serbia to the MK airport. The final destination is declared as the “United States,” a technique used by SOCOM to facilitate the transfer of weapons to Syria. (See: The Pentagon’s $2.2 Billion Pipeline)

The base is publicly acknowledged as a logistical center for Central Command, the US military division that conducts operations in Syria.

From Romanian and German military bases, the cargo is transported by giant C-17 military cargo planes to logistical hubs in Turkey, Jordan and, since 2017, Kuwait. From there, it is transported by road or air to fighters in Syria or used in training, according to a Pentagon report and sources involved in the process.

The governments of Romania and Germany told BIRN and OCCRP they were unaware of their role in the Syria supply-line, but in December 2016, the Pentagon ordered its contractors to stop delivering weapons to German bases amid growing concern from Berlin. (See: German Concerns)