Paying so-called commissions to intermediaries – including armored cars – is one way to win lucrative arms deals. He had done so himself, boasted arms trader Marc Morales.

“You just gotta be smarter than the government,” he said.

Unfortunately for him, he was talking to an FBI informant.

Today, Morales’ US firm, Global Ordnance, is one of the most important players in the Pentagon’s efforts to arm Syrian rebels fighting the Islamic State in Iraq and Syria (ISIS). He and 13 other US contractors are set to deliver up to US$ 2.2 billion worth of Soviet-style arms and ammunition by 2022.

The arms were sourced mostly from state-owned firms in the Balkans and Eastern Europe and were often negotiated over drinks and dinners in the restaurants and bars of Belgrade, Prague, Budapest, and Bucharest.

But Morales is not the only Pentagon contractor with a questionable past. Senior employees of three others – Vose Technical Services, Purple Shovel, and Regulus Global – have been convicted of fraud, sued for providing dangerous ammunition that caused the death of an instructor, and indicted for bribery, respectively, according to an investigation by the Balkan Investigative Reporting Network (BIRN) and the Organized Crime and Corruption Reporting Project (OCCRP).

The firms were selected, vetted, and contracted through two channels: the Picatinny Arsenal, a New Jersey weapons facility; and the Pentagon’s Special Operations Command (SOCOM). (See: The Pentagon’s $2.2 Billion Pipeline)

Most of the contracted firms are classified as small businesses owned by veterans or service-disabled veterans, which gives them priority in obtaining US contracts.

All but three had little or no experience before securing multi-million-dollar Pentagon deals.

For many of the firms, the contracts they won as part of the Syria program represented enormous increases over their previous Pentagon business.

The findings raise questions about the Pentagon’s vetting process, according to experts interviewed by BIRN and OCCRP. 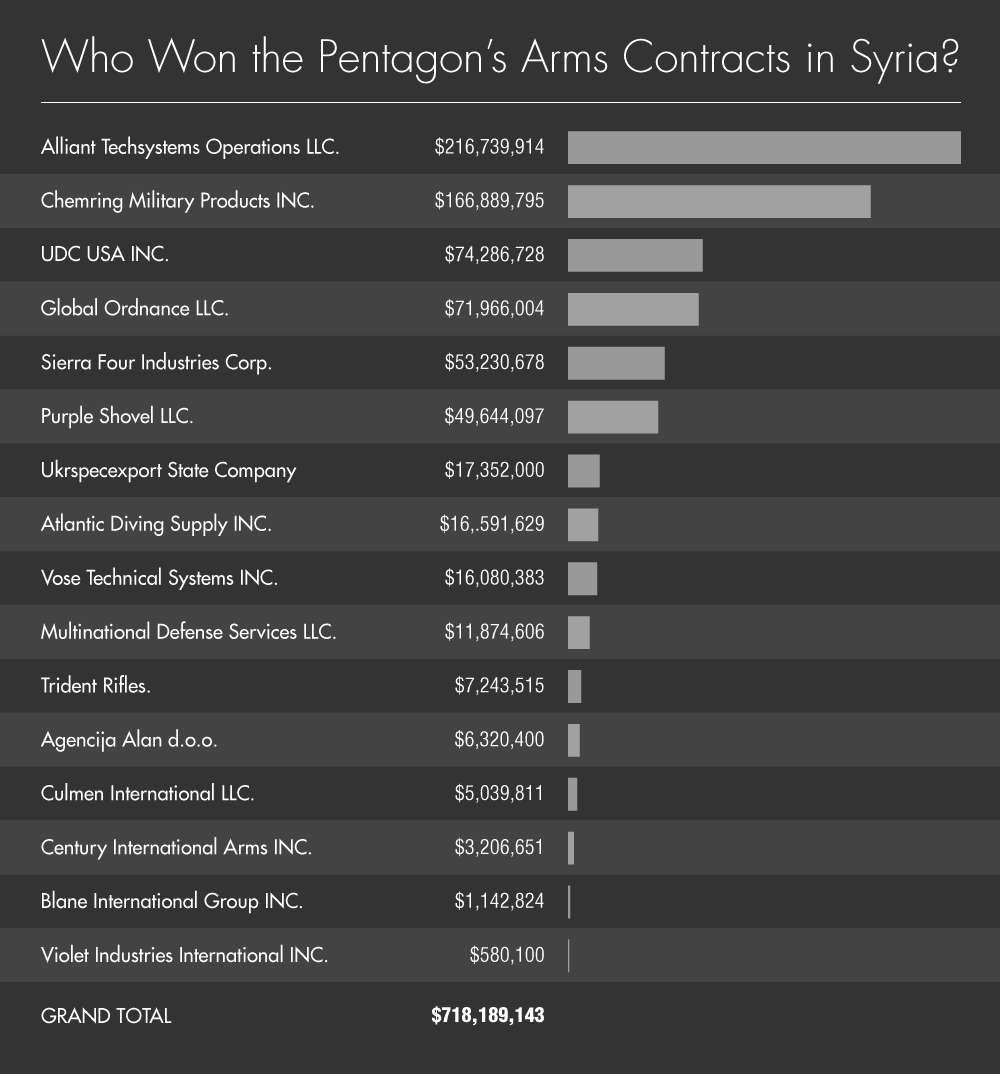 “The arms trade itself is highly corrupt and highly corruptible,” said Jeff Abramson, head of the Washington, DC-based Forum on the Arms Trade, a network of experts who monitor all aspects of the weapons business.

“The US has systems in place [to prevent deals] with those shady characters but clearly it does still occur,” he said. “Desire to complete the sale and get something to the area can outweigh the last ounce of due diligence that’s needed.”

As the Pentagon’s need for armaments has outpaced supply, they are increasingly being sourced from the former Soviet Union, including Kazakhstan and Georgia.

One contractor who asked not to be identified said the rising demand has made competition steep, forcing contractors into bidding wars to secure the arms and creating “chaotic dealings.”

In 2010, Morales was among 22 arms executives indicted for trying to bribe Gabon’s Minister of Defense to secure a $15 million arms deal. But the Gabon deal wasn’t real. In fact, it was an FBI sting aimed at rooting out bribery of foreign officials.

Two undercover agents posed as representatives of Gabon’s Ministry of Defense and explained to Morales and his partner, John Gregory Godsey, that they would inflate the price of the deal by 20 percent and call it a “commission.” Half of the extra money would go to the defense minister, with the other half split among intermediaries, according to court files. 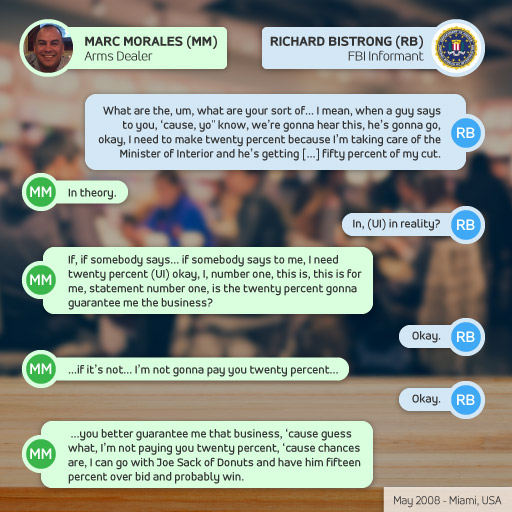 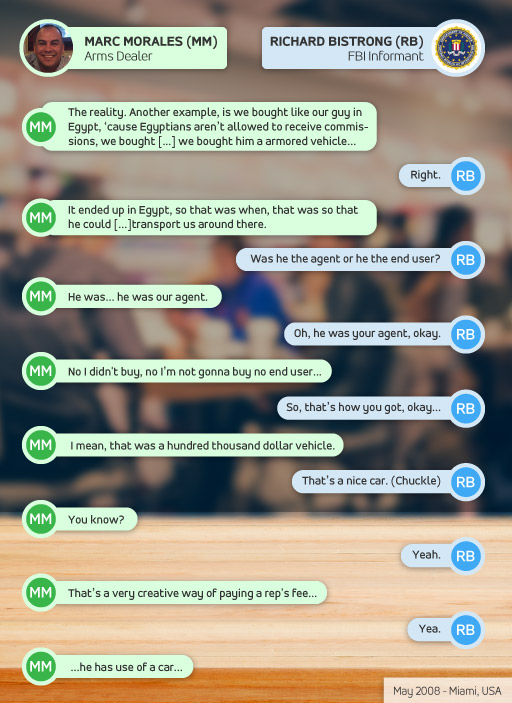 Previous Next
Excerpts from a transcript of a conversation between Marc Morales and an undercover FBI agent. (Credit: Edin Pasovic)

“If somebody says to me, I need 20 percent … I … (say) is the 20 percent gonna guarantee me the business?” Morales was recorded saying to the agents in an unnamed restaurant in 2008. “Nobody wants to violate the FCPA [Foreign Corrupt Practices Act] … but everybody knows it happens.”

During the meetings, Morales described “creative” ways he had previously paid “commissions” to foreign agents to secure weapons deals, such as justifying the gift of an armored car for an Egyptian middleman as a business expense.

After learning that he won the first contract to procure 30,000 rounds of ammunition from Gabon, Morales and his partner Godsey wired $2,705 – a fraction of the promised “commission” – to the undercover FBI agent.

Twenty-one other dealers were caught agreeing to pay “commissions” as well. It was the biggest-ever case of its kind.

Three of the dealers admitted to bribery. But in an unusual step, prosecutors dropped all 22 charges after juries failed to reach a verdict on seven defendants and cleared three others. 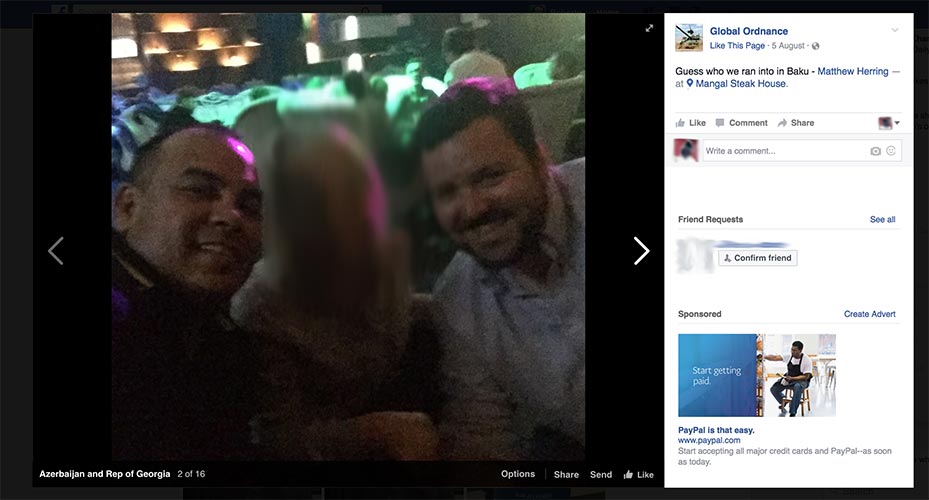 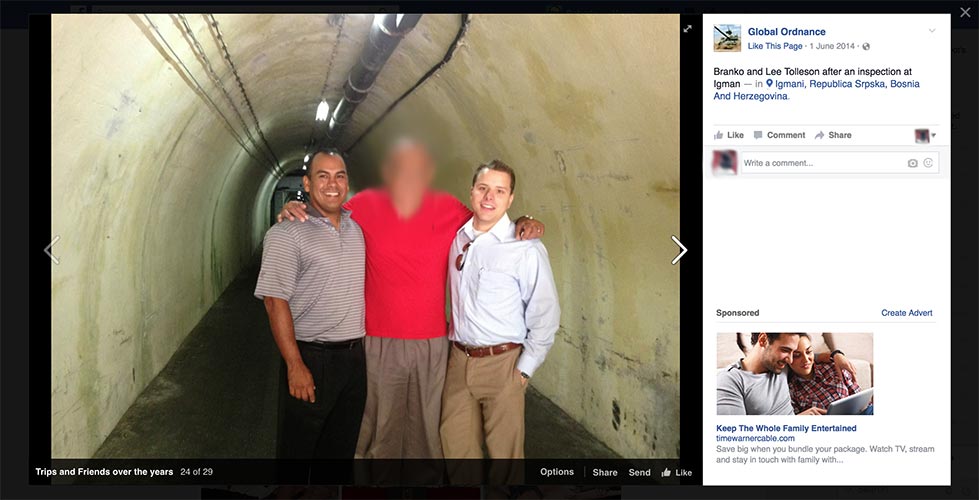 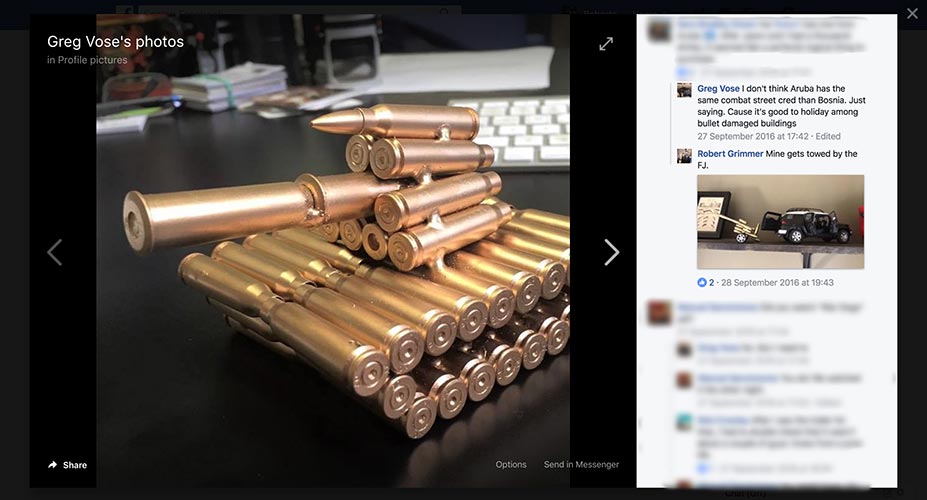 Previous Next
Marc Morales, president of Global Ordnance, posted Facebook photos showing his meetings with his arms industry contacts in the restaurants and bars of Belgrade, Budapest, and Bucharest. (Photo credit: Facebook)

Having escaped prosecution, Morales was free to resume his arms dealings. In 2013, he founded Global Ordnance, which since then has won contracts to supply SOCOM with nearly $72 million in munitions. The arms, which include machine guns, mortar rounds, and other weapons and ammunition from Serbia and Bulgaria, are likely intended for Syrian rebels.

The Florida-based firm is also working with British military giant Chemring, one of two firms which have secured the largest Pentagon contract to supply munitions to Syria, worth $750 million over five years and signed in April 2016.

That contract is run through the Picatinny Arsenal in New Jersey.

Asked if Chemring had any qualms about working with Morales on the deal given his comments in the FBI wiretaps, a Chemring spokesman said, “The defense industry is one of the most highly regulated in the world, especially when it comes to exports. For that reason, all Chemring Group companies operate strict sale-of-goods and anti-bribery policies which ensure that they are fully compliant with all relevant legislation.”

Morales declined to speak to reporters for this story.

Vose Technical Systems, another contractor that supplied arms for the Pentagon, employed an executive who had previously been convicted of fraud and obstruction of justice and sentenced to five years in prison in 2008.

Jeffrey Howard Stayton, then a Pentagon employee, had ensured that a $4.7 million government contract to supply and refit Russian helicopters would go to a company owned by a long-time friend, William Curtis Childree. Stayton approved the final payment to the company though it hadn’t completed the work. Subsequently, Childree wired him $61,000.

Stayton did not disclose the payment and described it as a loan from a friend to pay off the second mortgage on his house.

His fraud conviction was overturned in 2011.

After his release from prison, Stayton was hired as director of aviation for Vose Technical Systems. The company subsequently secured Pentagon deals totaling $15.6 million. 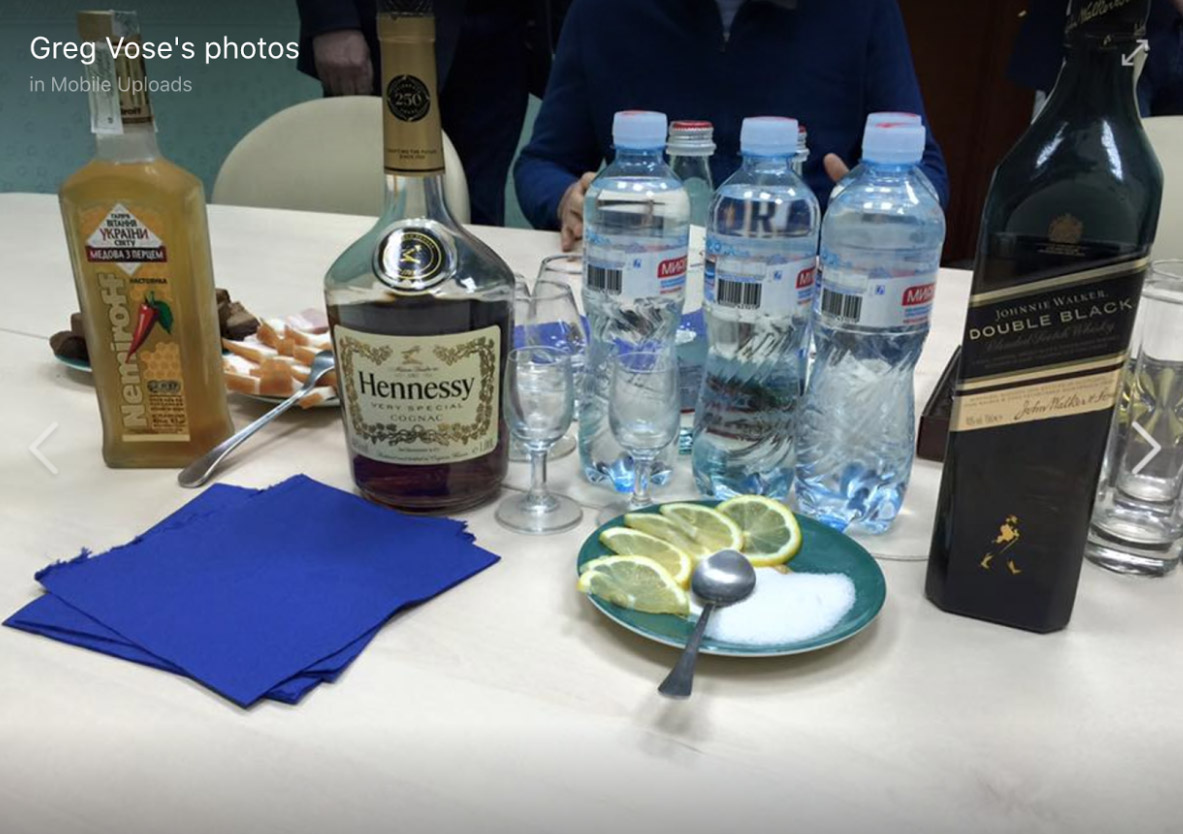 A Facebook photo posted by Greg Vose, the head of Vose Technical Systems, at a meeting in Kyiv, Ukraine. Credit: Facebook

The firm is run by Greg Vose, an experienced arms trader, and his sister, Deborah, who is the firm’s president. This qualifies Vose Technical as a woman-owned business, which qualifies it for preferential treatment under Pentagon procurement rules.

In response to reporters’ questions, Greg Vose said that Stayton works for a sister company and was not directly involved in the SOCOM contracts. But records show Stayton worked for Vose Technical until June 2016, when he transferred to VTS Aviation, another company run by the Vose siblings.

A Deadly Blast and Links to Organized Crime

One of the most successful and controversial contractors for the Syrian program is Virginia-based Purple Shovel, which had only $1.9 million in annual revenue before securing its first major weapons deal – worth $27 million – in December 2014. Since then, the value of its SOCOM contracts has almost doubled.

In December 2014, the company was contracted by SOCOM to provide training and weapons, including rocket-propelled grenade (RPG) launchers and anti-tank weapons, for Syrian rebels.

Purple Shovel hired two other companies, Regulus Global and Skybridge Tactical, to help with the job. (The president of Regulus Global, Lee Tolleson, was among the 22 executives indicted for bribing foreign officials to secure the Gabon arms deal. The charges were later dropped.)

As part of the contract, Regulus Global outsourced some of its work to a Sofia-based firm, Alguns Ltd. The owner of the firm, Alexander Dimitrov, is a former business partner of Bulgarian organized crime figure Boyan Petrakiev, nicknamed “the Baron.”

The munitions provided by the firms soon led to tragedy. In June 2015, a fatal explosion at an arms testing ground in Bulgaria killed instructor Francis Norwillo, a US Army veteran, and injured two others. Norwillo’s widow and one of the injured are now suing all three companies in a Florida court.

They allege that the firms provided 30-year-old RPGs for testing despite knowing that the same grenades had been rejected by the US government as “defective, unstable and dangerous,” according to court documents.

During the trial, Purple Shovel denied responsibility, claiming the explosion had happened during a recreational shoot. Skybridge Tactical said that the blast occurred during official training and that victims should receive US government compensation. Regulus Global denied the allegations.

Regulus Global and Skybridge Tactical did not respond to multiple requests for comment.

In a statement to reporters, Purple Shovel insisted that it was well-qualified for the job and had done all it could to help the families of the injured and deceased.

The US has also faced other scandals involving its procurement of Soviet-style ammunition for Iraq and Afghanistan.

In 2004 and 2005, the Pentagon lost track of some 190,000 weapons it had supplied to Iraqi security forces, according to a 2007 report by the Government Accountability Office. Many of these weapons originated in Bosnia and Herzegovina and Serbia.

And a 2015 Hollywood film called “War Dogs” told the true story of how a tiny firm from Miami run by a 22-year-old landed huge contracts to supply the Pentagon with ammunition for its operations in Afghanistan.

That deal ended in court after it emerged that the owner, Efraim Diveroli, had been supplying Chinese-made bullets by repackaging them in Albania. Chinese munitions have been under US sanctions since the crushing of the 1989 pro-democracy demonstrations in Tiananmen Square.

In the wake of that scandal, the job of securing ammunition was largely turned over to the Picatinny Arsenal, which boasts of its successes on its website and even criticizes SOCOM for the 2015 explosion in Bulgaria. But one of its contractors, Chemring, is working with Morales’s Global Ordnance, and this year Picatinny awarded two contracts to Global Ordnance directly.

Experts say the findings by BIRN and OCCRP cast doubt on the Pentagon’s claims that it has cleaned up its act.

Abramson, head of Forum on the Arms Trade, said that given the history of corruption in the procurement of arms and ammunition, the Pentagon should be extra diligent with its vetting.

A source working in the supply chain told reporters “It appears that the lessons learned from ‘War Dogs’ did not serve as a cautionary tale but instead proved to be a blueprint.”

Chemring, Vose, and Purple Shovel responded to requests for comment for this story, Global Ordnance and another contractor refused to comment, and none of the remaining contractors made any response.

Pentagon spokesman Mark Wright said that contractors are subjected to a “rigorous vetting process.” This includes checking the quality and source of the arms and ammunition to avoid supplies from “unapproved sources” such as North Korea, Iran and Syria.

But “mistakes are still possible,” he said, and the vetting process does not routinely include checking the criminal records of company executives.

“They have to follow the rules in hiring people that are eligible,” he said.

Correction, Sept. 19, 2017: The transcript infographics have been updated to correctly reflect the name of the FBI informant. OCCRP regrets the error.