Zagreb sold a record amount of aging weapons and ammunition to Saudi Arabia in 2016, ignoring evidence the arms are regularly being diverted to Syria.

Croatia has drastically increased its sales of decades-old arms and ammunition to Saudi Arabia despite mounting evidence that the deliveries are being diverted to Syria in breach of European Union (EU) and international law. 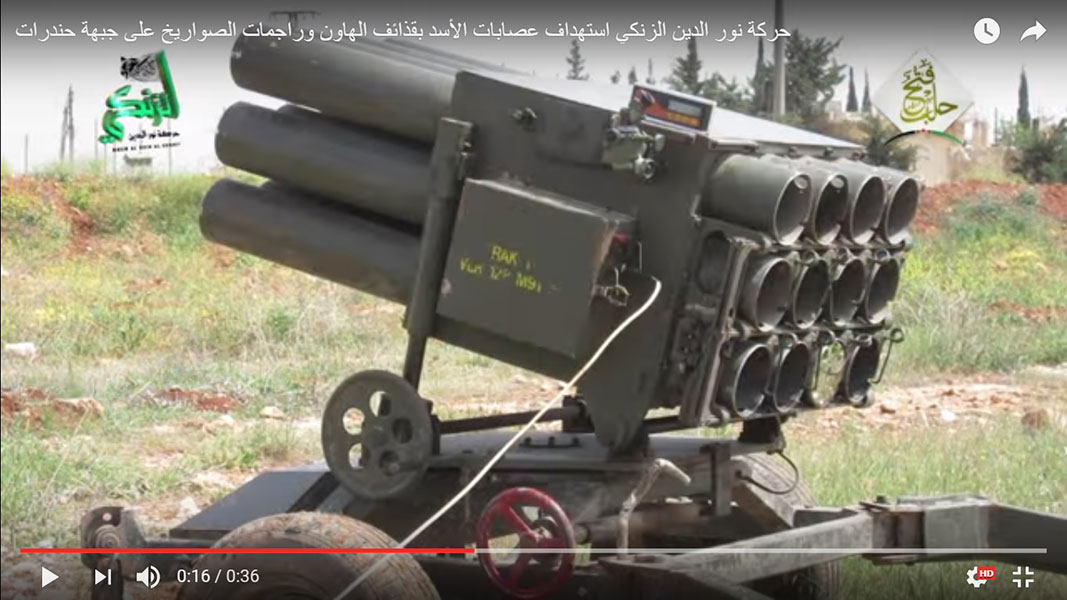 Though it has one of the best and most expensively equipped armies in the Middle East, the Gulf Kingdom imported US$ 81.7 million in aging ammunition, including bullets, mortars, rockets, and rocket and grenade launchers worth $5.8 million from Croatia during the first nine months of 2016. This total is already double Croatia’s sales to Saudi Arabia over the previous four years, and the final value will likely be higher, as figures for the last quarter have not yet been published.

Igor Tabak, a Croatian defense analyst, said that the country does not currently produce ammunition. “It is quite likely that the exports come from old ammunition,” he said, “possibly from the inventory of the former Yugoslavia and Eastern [Bloc] production.”

While Croatia has consistently refused to acknowledge that it is profiting from liquidating its old stocks on the Syrian battlefields, defense ministry documents reviewed by the Balkan Investigative Reporting Network (BIRN) and the Organized Crime and Corruption Reporting Project (OCCRP) show a major surge in sales from its stockpile coinciding with the start of the civil war in 2012.

According to those reports, the Ministry of Defense, which has a stockpile of around 18,000 tons, sold at least 5,000 tons of surplus ammunition in 2013 and 2014—as much as it had sold in the preceding decade.

The Ministry of Defense did not respond to a request for additional information on who bought the armaments and whether additional sales were made in 2015 and 2016.

A still photo on the left from a video posted by Sword of al-Sham on May 18, 2016, shows Croatian-made RAK-12 rockets marked “AL.” The right photo shows a Croatian soldier with an identical rocket showing the same markings.

Croatia was among the first countries to supply weapons to Syrian rebels in the winter of 2012. The shipment was routed via Jordan with logistical support from the CIA and paid for by Saudi Arabia, according to a 2013 investigation by the New York Times.

Following a flurry of embarrassing news coverage, Croatia abruptly started removing key information, such as the final destination of its exports, from official reports in an attempt to keep the details of this trade out of the headlines. 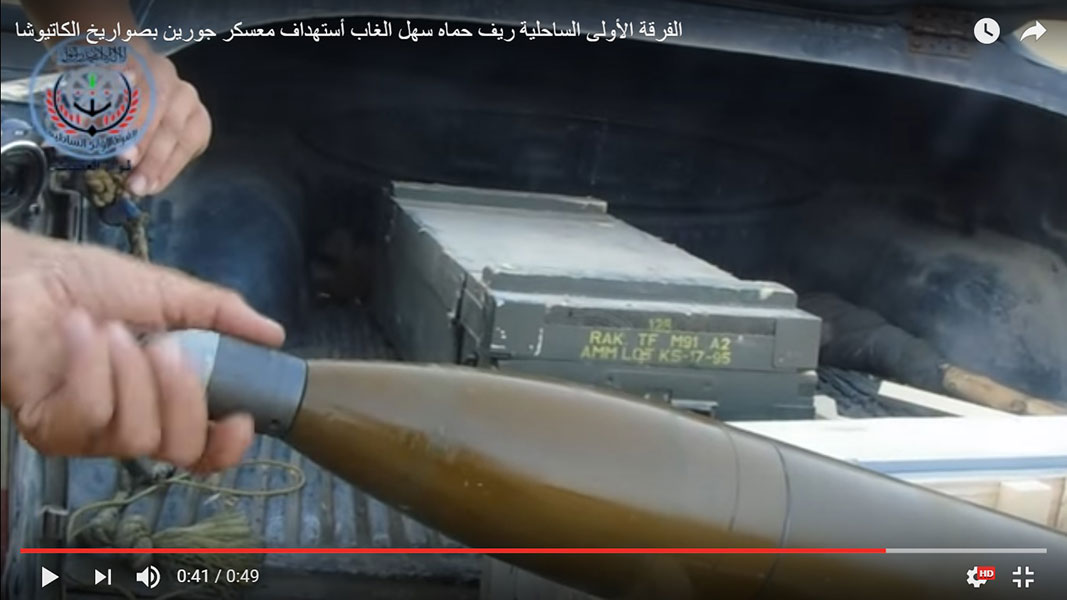 A still from a video published by the Fist Coastal Division on August 5, 2015, shows a box containing RAK-12 rocket marked KS (believed to indicate the defunct Koncar factory in Sesvetski Kraljevec, Croatia) produced in 1995. Credit: YouTube

The Ministry of Economy, which is responsible for issuing import/export licenses for weapons and ammunition, told BIRN and OCCRP that a 2012 law on personal data protection prohibits it from giving out this information. This is disputed by the Croatian Data Protection Agency, which said the legislation applies only to individuals, not to companies or governments.

Five non-governmental organizations described the removal of information as a “troubling decline in transparency” in their submission to a United Nations (UN) Human Rights Panel on Croatia in March 2015.

Reporters, however, obtained the data via a little-known UN database, Comtrade, which contains annual international trade statistics from more than 170 countries. 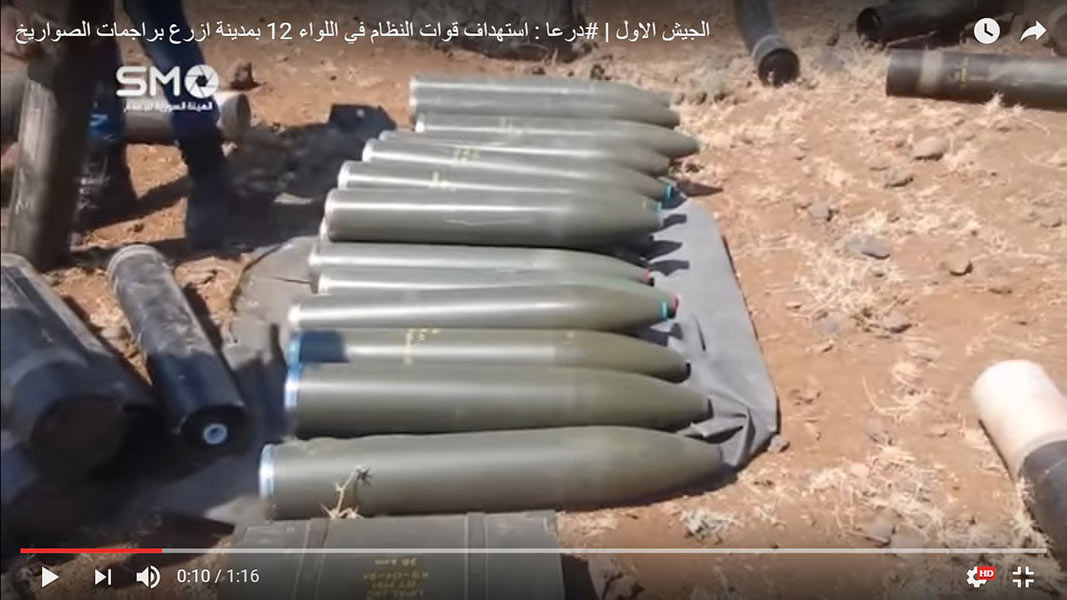 The two countries also imported more than $21 million in weapons, including rocket and grenade launchers, since 2012.

Prior to 2012, the arms trade between Croatia, Jordan and Saudi Arabia was virtually nonexistent. Since 2012, all but a few hundred thousand dollars of Croatia’s ammunition sales have gone to Jordan or Saudi Arabia.

A spokesperson of the Croatian Ministry of Economy said that the latest exports took place in accordance with licenses approved in 2015. He also added that some export licenses to Saudi Arabia were rejected in 2015, and none were issued in 2016 but refused to provide any further detail.

An earlier investigation by BIRN and OCCRP revealed that Croatia approved $302 million worth of arms export licenses over this period. Unless these licenses are revoked, millions of dollars in future exports are approved to go forward.

Falling Into the Wrong Hands 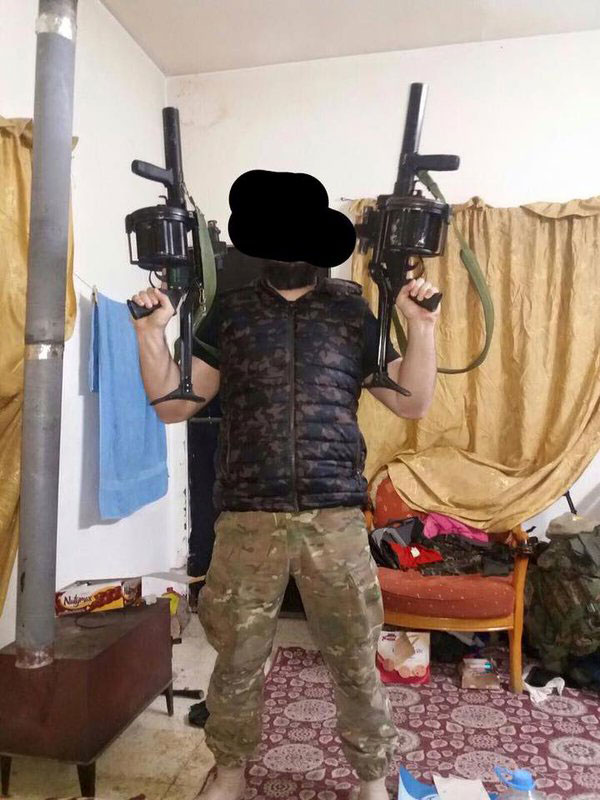 This photo, posted on Twitter on March 7, 2016 by @BM21_Grad, one of the most reliable weapons monitors in the Syrian conflict, shows a fighter from the Imarat Kavkaz, a Caucasus-based Islamist group, with a Croatian-made RBG-6 grenade launcher. Credit: Twitter: @bm21_grad

While experts have previously highlighted video and photographic evidence of Croatian-made RBG-6 grenade launchers and RAK-12 multiple-launch rocket systems in Syria, Croatian officials have disputed their origin, pointing out that similar weapons are produced elsewhere.

However, new analysis by BIRN and OCCRP of the social media profiles used by brigades fighting in Syria, as well from online enthusiasts who monitor the spread of weapons, provide clear evidence that these weapons are Croatian-made.

Among the weapons and ammunition identified in large quantities in Syria are the RBG-6 grenade launchers and RAK-12 multiple-launch rocket systems, as well as rockets and mortar shells manufactured in the mid-1990s, after Croatia seceded from Yugoslavia: 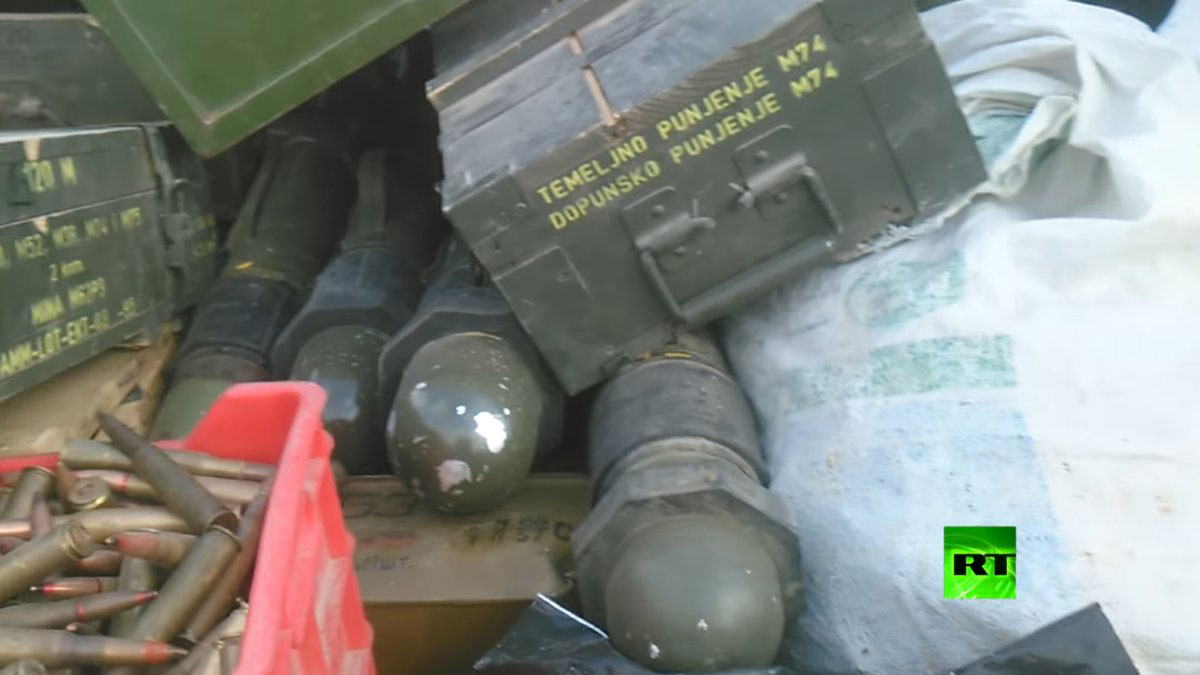 This photo, a still from an RT report, was taken from a December 2, 2016 tweet by @CT_operative. It shows a 120mm mortar captured by the Syrian army following a rebel retreat. The mortar was likely manufactured in the “Elmech” factory in Krapinske Toplice, Croatia. Credit: Twitter: @CT_operative

But so-called moderate Syrian opposition groups are not the only military formations to have secured Croatian-made weaponry. “We’ve now seen groups like ISIS and Jabhat al-Nusra using these weapons, although how they acquired them is unclear,” said Eliot Higgins, a London-based citizen journalist. 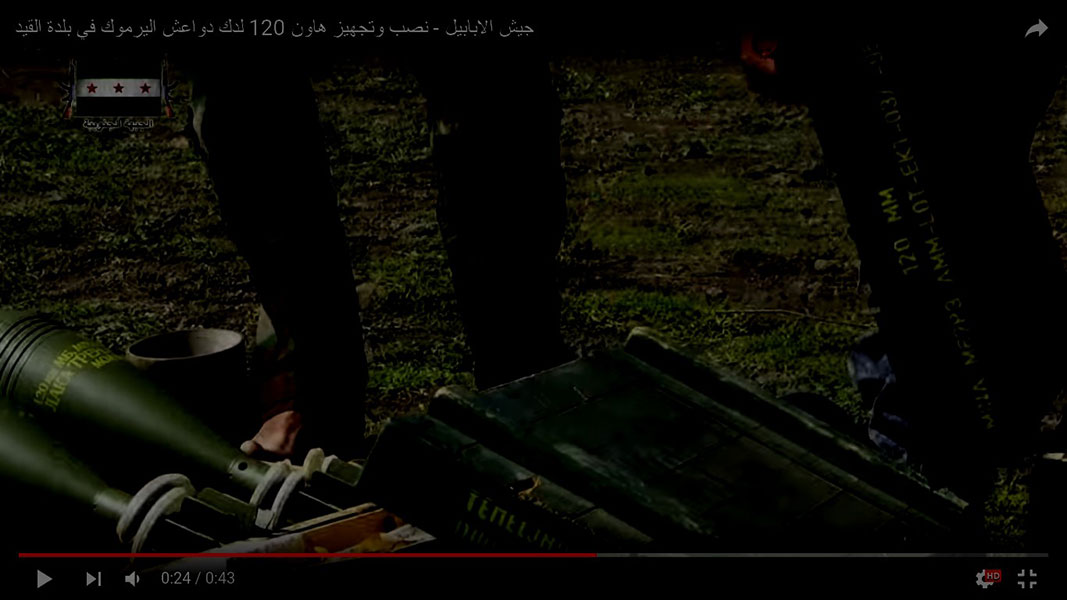 A still from a video published on April 24, 2016 by Alobabil Army shows Croatian-made 120mm mortar rounds produced in 1990 in the “Marko Oreskovic” factory in Licki Osik, Croatia. Credit: YouTube

“[These weapons] could have been looted from other groups, sold between groups, or provided directly (…)” he said. Higgins is the founder of Bellingcat, which uses open source information and social media to track weapons in conflict areas. He was one of the first to identify Balkan-sourced armaments in use in the Syrian war.

Both Amnesty International and the Washington Institute for Near East Policy reported that ISIS and Jabhat al-Nusra obtained Croatian and Yugoslav-made rocket and grenade launchers as early as 2013. 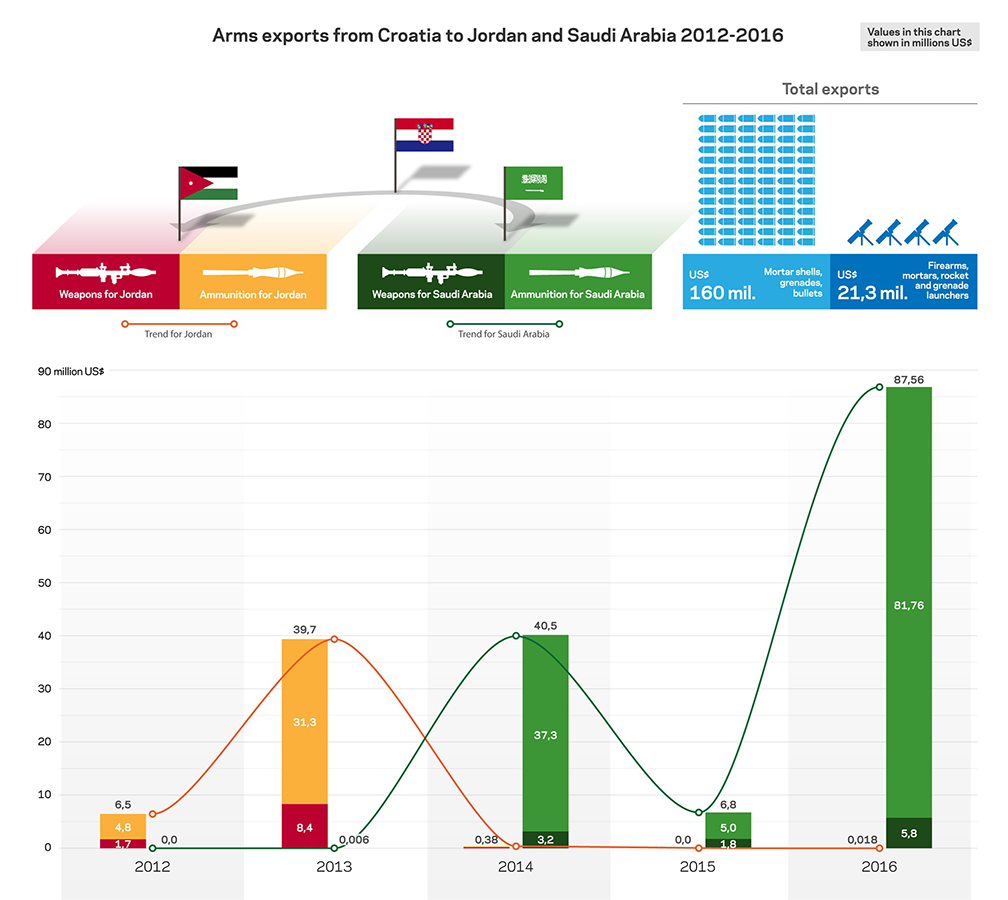 Darko Kihalic, head of Croatia’s arms licensing department at the Ministry of Economy, told BIRN and OCCRP that Zagreb has no qualms about selling arms to Saudi Arabia as long as it provides the correct documents.

He said there were no restrictions on exporting to Saudi Arabia and Croatian firms have a right to earn an income. 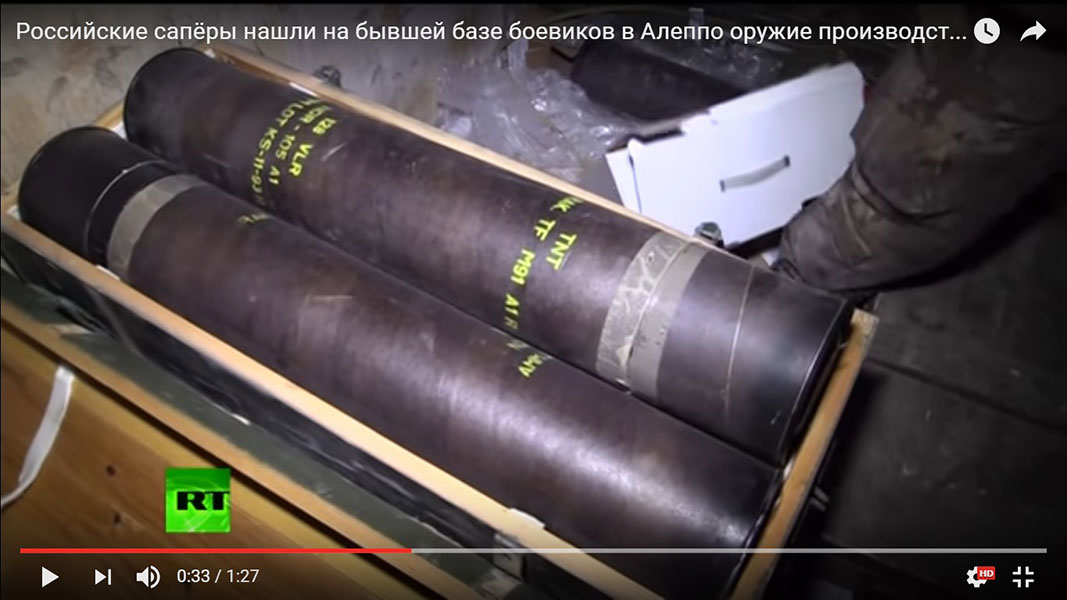 A photo from a December 28, 2016 RT report about a captured rebel arsenal shows a RAK-12 rocket marked KS (believed to indicate the defunct Koncar factory in Sesvetski Kraljevec, Croatia) produced in 1993. Credit: Youtube

Asked whether he was aware that Croatian weapons bought by Saudi Arabia were turning up in Syria, Kihalic said: “There is nothing more for us to check, as the [export] document says their ministry of defense or police forces [in Saudi Arabia] will use it [the weapon] and that they won’t resell it or export it.”

Human rights groups dispute Kihalic’s view. Patrick Wilcken, an arms researcher for Amnesty International, said that Croatia is obliged to take measures to prevent both weapons from being diverted to another country, and from being used to commit serious human rights violations. Given the mounting evidence of the systematic diversion of arms from Saudi Arabia to armed groups in Syria, Croatia’s failure to take due diligence to prevent further diversion could result in a breach of the EU Common Position and the Arms Trade Treaty.

Bodil Valero, a Green Party member of the European Parliament from Sweden and the parliament’s rapporteur on arms, criticized Croatia and called on the EU to tighten its grip on its members’ arms exports.

“Croatia has used Saudi Arabia as it is not allowed to export to Syria, and it ends up in the hands of ISIS and the Kurds,” she told BIRN and OCCRP. “We have to do much more.”