Tiny Moldova, sandwiched between Romania and Ukraine, was deluged by a financial tsunami. For four years starting in 2011, secretive Russian companies poured more than $20 billion into just a single bank in the republic – more than double the country’s GDP. 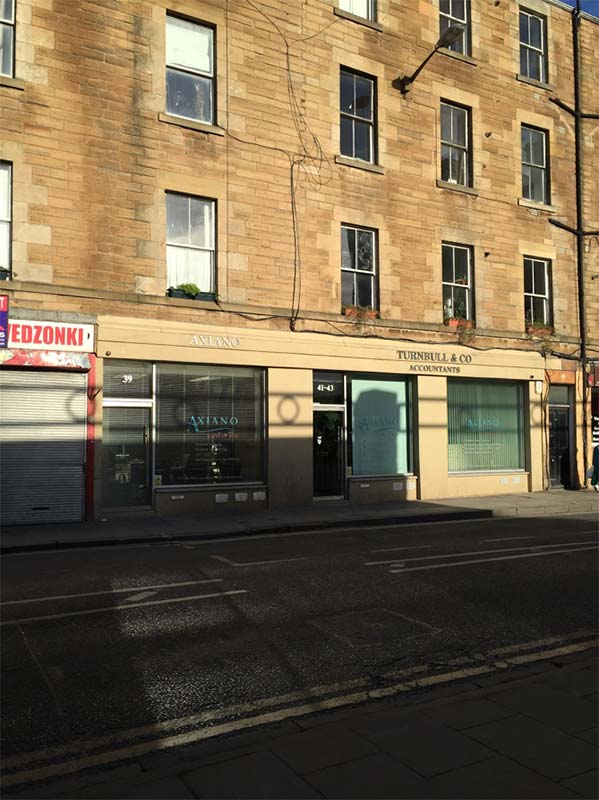 Axiano is the UK formation agent who created companies that were used both in the Laundromat and the “theft of the century” in the Republic of Moldova. Credit: Iggy Ostanin

Spotting what turned out to be a massive, global fraud – dubbed the Russian Laundromat by journalists and investigators – should have been a snap.

The Laundromat appears to have been an all-purpose financial crime vehicle used by its Russian creators to launder ill-gotten gains, steal funds from companies, move assets out of Russia and into offshore jurisdictions or the West, evade taxes or import duties, and more.

The fraud was bold; the tip-offs numerous.

Ghost companies without a single human employee, without physical offices and involved in no real economic activity sent billions out into the world – ultimately into accounts held in some of the world’s most prestigious banks.

Despite glaring alarm bells, these big banks allowed, fell for, could not, or did not stop the scam. This may be in part because money launderers have learned to manipulate bank rules, international laws on incorporating businesses and setting up offshore locations, and company registry regulations. In addition, some banks fail to enforce “know your customer” rules or even their own anti-laundering rules.

Among the banks receiving hundreds of millions of stolen or laundered dollars sent from Russia to Moldindconbank in little Moldova were Danske Bank, HSBC, Deutsche Bank, UBS, Bank of China, and The Royal Bank of Scotland.

What Do The Banks Say?

Latvian banks were among the biggest recipients of Laundromat money. Trasta Komercbanka was shut down in the spring of 2016 while local regulators warned others and put them under close monitoring.

Credit: Niels Ahlmann Olesen/Berlingske, Denmark The Chișinău headquarters of the Moldovan bank that sent dirty money all over the world.

Maija Treija, director of the Compliance Department in the Financial and Capital Market Commission, described for the Finnish Broadcasting Company, an OCCRP partner, the steps that the country has taken to clean up its act.

She said that to prevent money laundering, it is not enough to “know your customer.” Banks need to know their customers’ customer.

“Banking officials can only claim to have done proper due diligence if they thoroughly understand the nature of a client’s business, who it sells to and who it buys from,” she said.

On the other hand, representatives of Moldindconbank maintain their bank did nothing wrong. Even today, when much more is known about what happened, they refer to their 2014 press release which says OCCRP’s news stories were aimed at tarnishing the bank’s image.

“Moreover, BC Moldindconbank S.A. informs that all transactions made by the Bank since the beginning of its activity are completed in strict accordance with the legislation of the Republic of Moldova and regulations of the National Bank of Moldova,” it says. 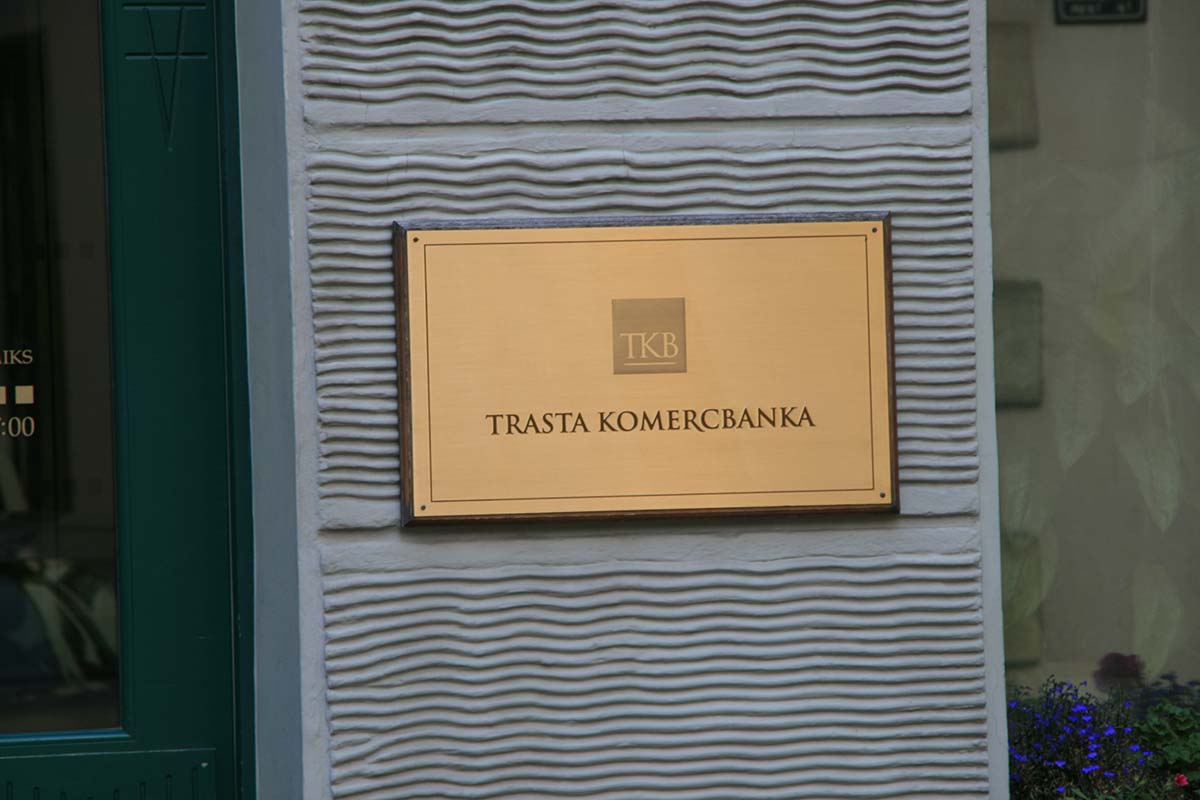 The Latvian bank was shut down for not complying with money laundering regulations. Credit: Paul Radu/OCCRP

Reporters for OCCRP and its partners asked dozens of banks, including big international outfits, for comment on the Laundromat-associated payments that came to them. Most responded that they take laundering seriously and reiterated their commitment to stop the flow of dirty money. But most went no further than that. Some cited the privacy of their customers as a reason for this reticence.

HSBC, which handled more than half a billion US dollars from the Laundromat’s companies, said: “HSBC is strongly committed to fighting financial crime … This case highlights the need for greater information sharing between the public and private sectors, each of whom holds important information the other does not.”

In 2012 HSBC was caught up in another multi-billion-dollar scandal over lax anti-laundering policies that let money flow into the US from terrorists, drug cartels, and rogue regimes. That scandal revealed how easily bank policies could be ignored by the affiliates of the international bank with no consequences from regulators.

Johan Wallqvist, head of group media relations at Handelsbanken, a large Swedish bank, said, “The transactions you mention are four years old and we are well aware of them. The necessary actions have been taken which included closing our relations with Trasta Komercbanka in 2013.”

Danske Bank of Denmark said that some of the transactions were due to employee failures in their Estonian branch.

In general, financial industry regulators require banks to write and follow an anti-money laundering compliance program which sets up rules and procedures to report transactions detected as suspicious and possibly part of a crime.

Aside from regret and promises of reform, the banks offer little explanation for how the Laundromat got away with what it did for so long. 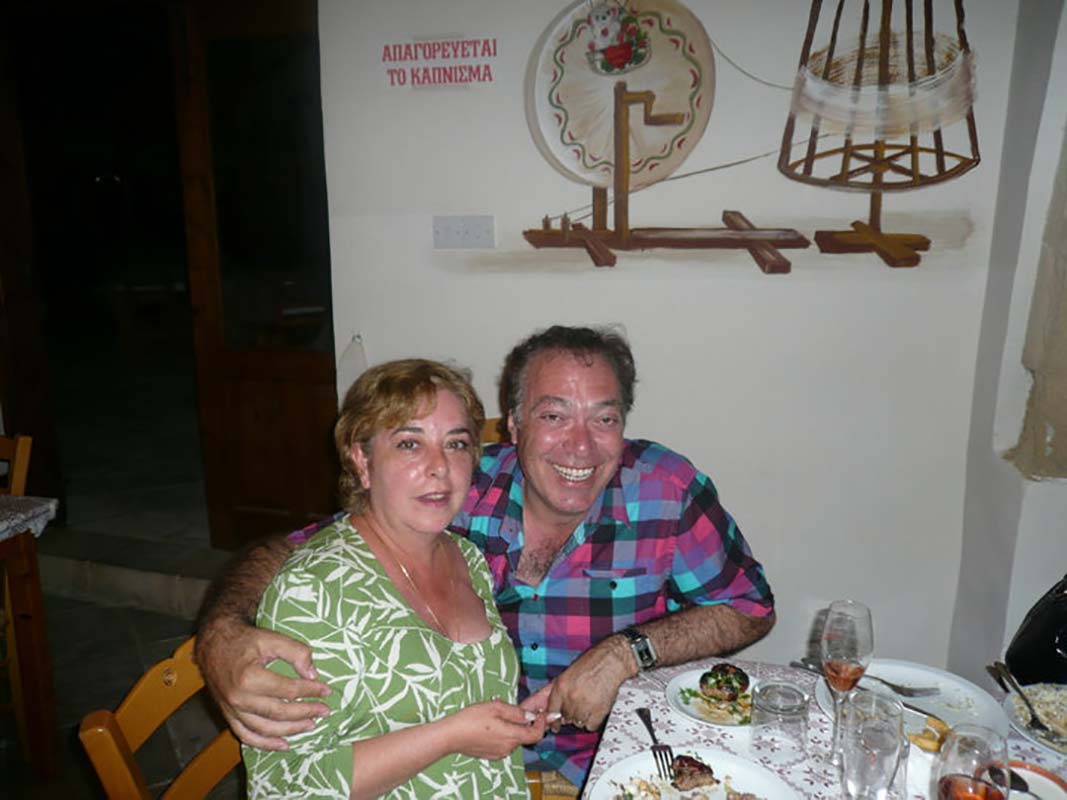 The companies that comprised the Laundromat grew out of the offshore registration industry that services dodgy and short term deals. From their inception, they should have raised flags.

In the spring of 2009, a mysterious exchange of emails took place between lawyers for the law firm of Mossack Fonseca and someone who used the signature “768” and the email address 68@hushmail.ch. Number 768 wanted a list of “shelf companies” from Mossack Fonseca – the law firm notoriously involved in the Panama Papers leak.

Shelf companies are a popular tool among money launderers and other crooks. They are companies that do no business, are incorporated by dodgy lawyers and registration agents in offshore tax havens, and are then aged “on the shelf” until needed, so that anyone checking business registries is duped into thinking the company has been in business for years.

The Mossack Fonseca lawyers helpfully responded with an Excel file of shelf companies they had on sale in various jurisdictions, including the United Kingdom. Four of these companies played an important role in the Russian Laundromat a few years later.

The email exchanges reveal that 768 was an administrator of Prospera Lithuania, a big “formation agent” – a company that helps business people, generally foreigners who are unfamiliar with local regulations or without legal standing, establish companies.

After the lawyers sent the Excel file, they got back a note saying: “Thank you for your prompt answer. Please note that I shall liaise with my client in this matter and revert you accordingly. With best regards. Katrin Taho, PROSPERA.”

It is unknown how or even whether Prospera acted on information from the law firm, but the email exchange highlights a common practice. Formation agents sell shelf companies and provide nominee directors or proxies who can throw off law enforcement agents trying to identify who really owns or benefits from such companies.

One company in the file sent to Prospera was Westburn Enterprises Ltd., established in March 2004 in Scotland by a local formation agent, Axiano Company Secretaries Ltd.

To show how complicated this can get, Axiano is run by a former tax official in the tax haven of Cyprus, Marios Papantoniou. Papantonoiu was a nominee director or manager in 66 other British companies, including some used in what has been called the 2014 Theft of the Century in Moldova – the siphoning of $1 billion from three of the country’s banks.

Axiano, a formation agent, provided a beneficial owner for Westburn’s account in Moldindconbank
View on DocumentCloud

Between 2004 and 2011, Westburn accounts were dormant, according to the UK company registry. It never reported a profit and only reported expenses amounting to £ 3,250 in administrative costs. It also reported a share capital of £ 1. It looked for all the world like a typical shelf company.

Papantoniou served as nominee director between 2004 and 2014, and Axiano was listed as shareholder. In March 2014, Papantoniou resigned and was replaced by Stiv Kalinin, a Ukrainian. Soon thereafter British authorities dissolved the company.

But Westburn was extremely busy between March 2012 and the spring of 2014, taking in more than $2.25 billion in Russian money to its accounts in Moldindconbank. A chunk of this was spent directly out of the Moldindconbank account, and the rest was wired to Trasta Komercbanka in Latvia.

Almost $1 million of the funds that swelled Westburn’s Moldindconbank account was used to buy shares in another Moldovan bank.

Documents OCCRP reviewed indicate that Papantoniou’s company also provided a fake owner for the Westburn Enterprises account at Moldindconbank: Maurice Walters. He is an Axiano director and was or is a director in another 116 companies Axiano established. Walters is listed as the beneficial owner of the bank account, and a copy of his passport is attached to the banking documents.

Neither Axiano nor Papantoniou or Maurice Walters responded to requests for comment. 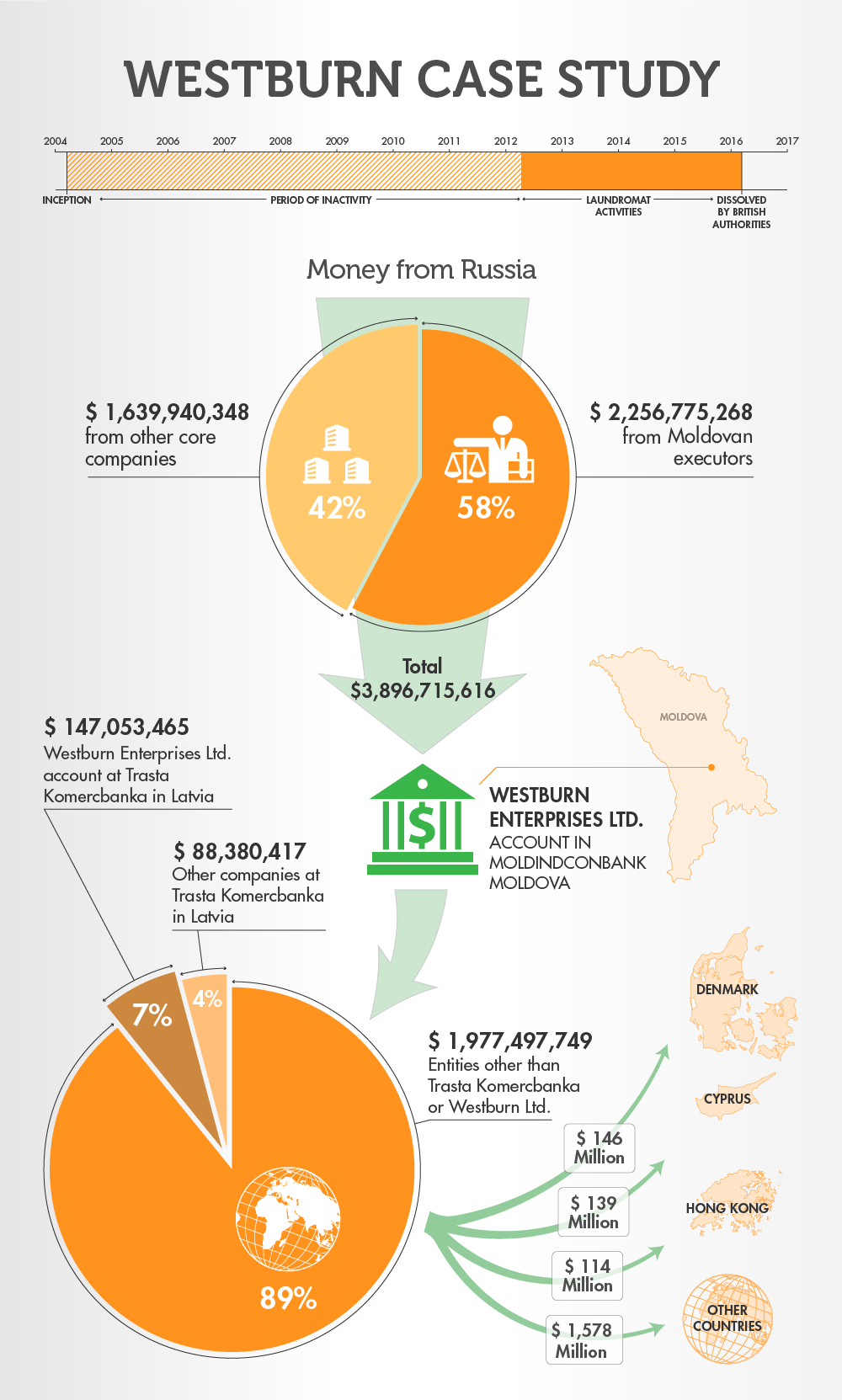 How one of the Laundromat shell companies worked Credit: OCCRP

Like Westburn, 20 similar, secretive companies received money from Russia then spewed out billions to the rest of the world.

Thousands of firms holding accounts in giant and prestigious banks around the globe received the Russian billions via Westburn and the accounts of its sister ghost companies.

Moldovan authorities, in search of local culprits responsible for orchestrating the massive money laundering scheme, instead last summer arrested representatives of the National Bank of Moldova (NBM) who they say at least abetted it. This month, the bank’s former deputy governor and three former executives were sent to court for “allowing, by not fulfilling their work duties, the laundering of enormous money volumes.”

This story was corrected to more accurately convey how much money Westburn received on its Moldindconbank accounts. OCCRP regrets the error.