Latvia is sick of being seen as the Land of Money Laundering, and is working to shore up laws and crack down on violators, according to a top regulator.

“Our goal is to be a regional financial center, and we want to be fully compliant with the highest standard of international regulation,” Maija Treija told reporters, adding, “[We] are taking very serious action to lower the risk” of money-laundering and other financial fraud.

Treija is director of compliance control for the Latvian Financial and Capital Market Commission (FCMC), which oversees the country’s banking system. She spoke recently with the Finnish Broadcasting Company (YLE) investigative program MOT about her country’s efforts to clean up its banking system.

It is an effort that has picked up steam over the past 18 months, she told reporters. 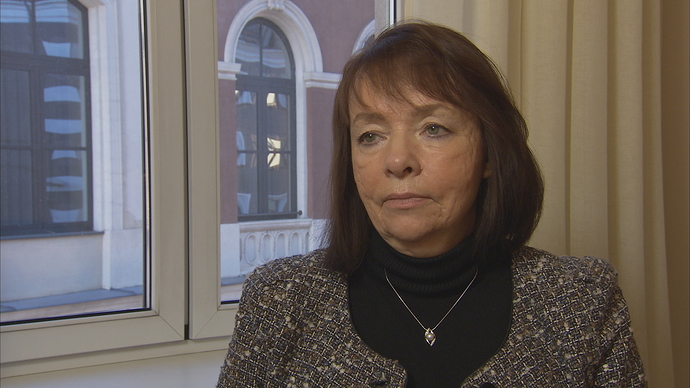 Maija Treja is director of compliance for the Latvian Financial and Capital Market Commission (FCMC) which regulates the country’s banking system Credit: yle.fi

In 2014, the Organized Crime and Corruption Reporting Project (OCCRP) revealed details of the Russian Laundromat, a massive money-laundering and financial crime ring that moved more than $20 billion in stolen money from Russia to the European Union via banks in Moldova and Latvia. Then in July of 2015, OCCRP reported on the theft of $1 billion from three banks in Moldova, some of which moved through Latvian accounts.

And in October 2015, the Organization for Economic Cooperation and Development (OECD) criticized Latvia for moving too slowly against corruption and money laundering.

Finnish TV became interested in the Latvian experience after its investigators probed documents showing that $26 million in Russian Laundromat money flowed through banks in Latvia and Moldova and into 28 Finnish companies in 2013 and 2014.

Treija, who joined the FCMC in mid-2015, said that Latvia had long been a favorite destination for money leaving the former Soviet Union. Western banks rushed to set up shop in Latvia after its early break from the USSR, as funds poured in from international financial organizations to bolster the fledgling democratic government.

The country’s strong IT sector and its familiarity with Russian language and culture were additional draws, she said. The spa town of Jurmala near the capital of Riga long served as a summer home for Soviet premieres.

Money continued to flood in as eastern neighbors went through the convulsive process of privatization, and Latvia’s entry into the European Union in 2004 made its banking system still more attractive. “All this results in such specific money-laundering basics as bribery, laundering of criminal, illegally gained funds [and] tax evasion,” she said. “So it all came together.”

Weak laws and lax regulation combined with extensive criminal activity in surrounding countries to fuel a boom in financial services in Latvia, she said. A decade ago, more than 50 foreign banks operated in Latvia, offering all kinds of sophisticated services. Most were legitimate but some skirted if not outright broke the law.

Depositors concerned about instability in the former Soviet states moved to get their money into safer institutions in the EU, and Latvia grew increasingly adept at helping them. It offered “Russian-speaking staff, people who had common history with these potential customers from Russia, and understand the way that they think, their worries, why they want their money outside of their resident country, for what reason,” Treija said.

But closer integration with the EU and other Western institutions brought with heightened scrutiny, and as western regulators raised their own standards, they began to demand that Latvia pass tougher laws and fully obey those on the books.

Treija says Latvia has done so, noting that since the end of 2015 the country has levied substantial fines on six banks, thrown one Estonian bank out of the country and revoked the license of Trasta Komercbanka, the bank made notorious by the Russian Laundromat and the massive Moldovan bank theft.

She concedes that enforcement was lax prior to the crackdown. Fines, when levied at all, were inconsequential. Seven banks were fined between mid-2014 and the end of 2015, but the fines were so small they had negligible impact, she said.

By mid-2016, she said, the situation was drastically different.

A crisis arose when western “correspondent” banks–large international institutions legally authorized to transact currency conversions, transfers and other business services–began cutting off Latvian banks tarred by allegations of money-laundering. That meant the banks could no longer serve clients who wanted to turn rubles into dollars or euros.

Latvia beefed up its own anti-money-laundering laws, following the international trend to stronger regulation, and sharply increased fines for non-compliance, Treija said. In some cases, they set even stricter rules than necessary.

For example, most countries require financial institutions to pay extra attention to activities of “politically exposed persons” – elected or other high-level public officials – and their immediate relatives. In Latvia, Treija says, that extra level of scrutiny extends to grandparents and domestic partners who are not spouses of these officials.

The agency has quintupled its Financial Integrity Division personnel working on money laundering from four in mid-2015 to 20.

And her agency is paying closer attention to auditing banks, levying fines, and requiring banks to more closely examine activities by depositors from countries considered at high risk for criminal activity. That include keeping track of what percentage of their deposits come from high-risk individuals or countries, she said.

They must also prove they know the source of the money deposited with them and they must keep track of risky activities–such as “credits, loans with financial collateral, trust deals, [and] private banking services” to demonstrate to regulators that such actions are kept to a safe percentage of their business, she said.

As a result, Latvia today has about half as many foreign banks as it did a decade ago. “Today, we have 26 banks and branches of foreign banks … [which is] a positive sign.”

“We are requesting annual testing of money laundering risk exposure, which means that banks have to perform tests for such things as” being cut off by international correspondent banks and being fined for failing to meet anti-money-laundering standards.

Latvian banks are now also required to look more closely at “shell corporations,” companies created in offshore tax havens that exist only on paper and are commonly used to launder illicit funds. (Suspect money can be wired quickly between a series of such fake companies, obscuring its ultimate destination or the person who actually owns it).

If a given bank has too many shell companies as clients–say, if it earns 30 percent of its income from them–“the bank immediately … is put under enhanced supervision.”

Treija says the shutting down of Trasta Komercbanka demonstrated the weakness of the previous system and the need for heightened diligence by regulators. Initially regulators were not paying much attention to what the bank was doing, but when they did start to take notice and warned the bank, its officials did not pay much attention either.

Regulators have learned that because criminal tactics constant change, regulators have to keep up. “This fight against money laundering is a permanent issue, because the schemes are being modified, the schemes are being amended, and new technologies, all these electronic monies, all these Bitcoins and [similar] things, they are unfortunately being used specifically for these money laundering [purposes].”

She said it is essential to keep on fighting, “because money laundering brings a lot of evil, starting from corruption, from criminalization. It causes a lot of harm to economies,” facilitating criminal activities and distorting true business competition.

The ultimate victims, she said, “are the countries, the people, also the governments.”