Prosecutors in Montenegro halted an investigation into nearly 22 million euros illegally paid to privileged clients of a failing financial institution while it was under the management of the Central Bank, even as smaller account holders lost their savings.

The state prosecutor’s office ended its probe into the Central Bank’s management of Atlas Bank, it said in response to a member of Parliament who requested an update on the investigation.

“We inform you that the decision was made in this case and that the criminal complaint was rejected,” prosecutors wrote in an Oct. 11 letter to parliamentarian Aleksandar Damjanovic.

Damjanovic, who confirmed the authenticity of the letter, which OCCRP obtained from a third party, said it was “unbelievable” that prosecutors had decided to stop investigating, and he vowed to raise the issue again in Parliament. 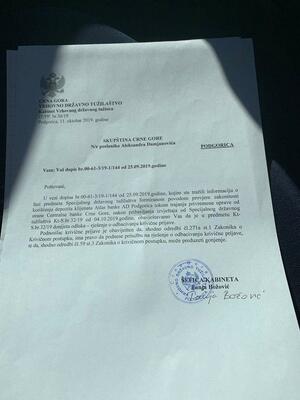 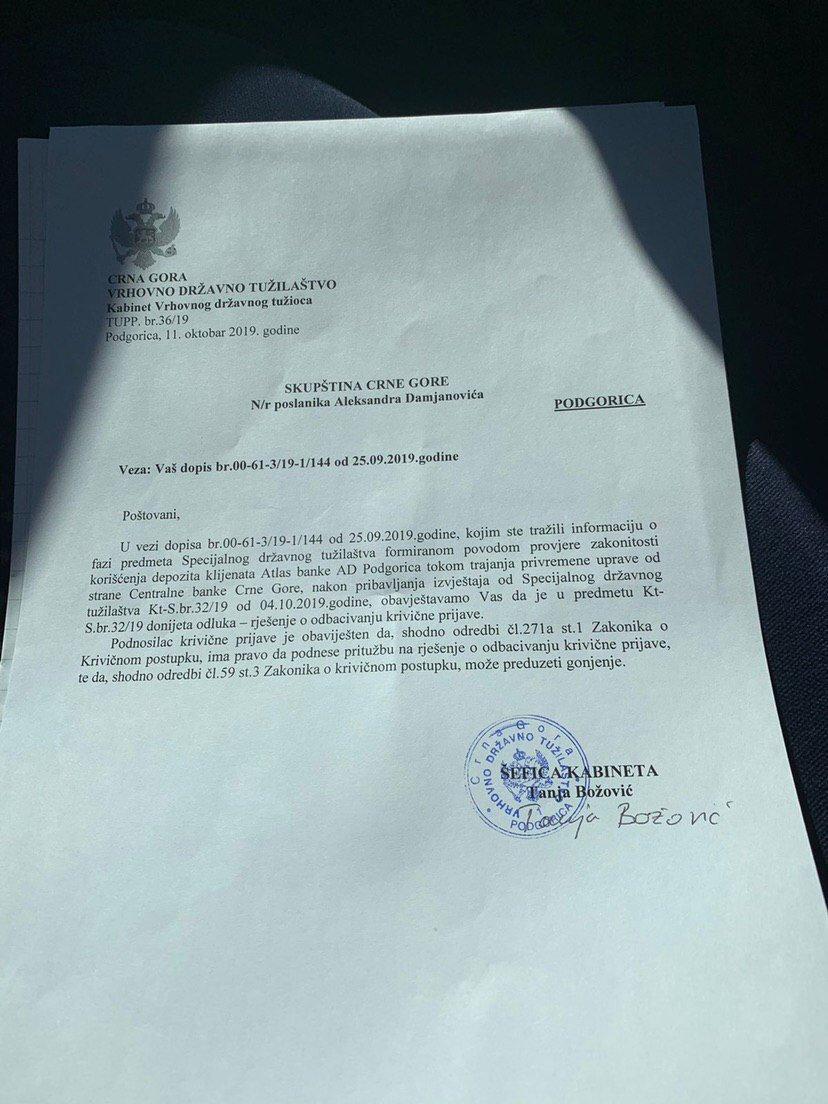 Credit: OCCRP The letter from the state prosecutor’s office to MP Aleksandar Damjanovic.

Questions about the investigation into Atlas Bank are just the latest surrounding the financial institution, which declared bankruptcy in April after years of mismanagement and questionable transactions.

The episode highlights Montenegro’s struggle with high-level corruption and crime, which the country has pledged to tackle as part of its process to join the European Union.

In June 2018, state prosecutors ordered Atlas to freeze about 63 million euros of funds suspected of being laundered through an e-commerce system. Publicly available data analyzed by OCCRP indicates that about 4.4 million euros of those frozen funds disappeared from Atlas’ books after the Central Bank imposed interim management.

Atlas was on the brink of collapse when the Central Bank took it over on Dec. 7, 2018 and managed it until April 5, when Atlas went into bankruptcy.

Montenegrin law requires financial institutions under interim management to cease almost all transactions. Account holders can be reimbursed a maximum of 50,000 euros covered by an insurance fund.

Yet analysts say the mismanagement continued under Central Bank administrators, who set up a scheme that allowed privileged clients to reclaim much larger amounts. People with smaller accounts and no connections were only able to reclaim 50,000 euros and lost the rest of their savings.

Damjanovic told OCCRP that, after hearing that some Atlas clients were reclaiming large sums, he put the question to two Central Bank officials who appeared with him on an April 15 program on Montenegro’s public broadcaster.

The officials, Tanja Teric and Dejan Vujacic, said 21.8 million euros had been transferred out of Atlas using a process called “netting.”

This practice is normally used by international banks for, among other reasons, settling accounts between companies by combining multiple invoices into a single payment. In this case, however, the definition was “stretched” beyond what is accepted, according to Mila Kasalica, an economist in Montenegro’s capital, Podgorica.

Kasalica said she was shocked when she watched officials admit to the practice on the live broadcast.

“I screamed at my television: you can’t say that!,” she said.

The actions at Atlas were both improper and illegal, said Kasalica, who works with the consultancy firm E-novativa.

It was applied to transfers between loan holders and depositors within Atlas, which is prohibited under international banking standards. Secondly, according to Montenegro’s banking law, no transfers should have been taking place at all during interim administration.

Kasalica said the transfers could only have occurred with oversight by Central Bank officials, and each transfer would have involved several transactions — leaving a trail of data that prosecutors could have requested as evidence.

While detailed data is not publicly available, Kasalica said that Atlas balance sheets posted to the Central Bank web site corroborate the admission the officials made on television. The balance sheets show that assets and loans held by clients decreased during the period of interim management by about 21.8 million euros.

Based on her research, Kasalica said, the illegal transfers appear to have occurred in two ways.

One way, she said, is for a company holding a loan at Atlas bank to connect to another company holding deposits. The depositor would then pay off at least some of the loan holder’s debts, even if they exceeded the 50,000 euro minimum — a negotiation that Central Bank managers would necessarily have participated in.

The loan holder would then regain ownership of the collateral it had put up, which could then be sold and the proceeds split by both parties. Alternatively, Kasalica said, the parties could make a separate contract outside Atlas in which the loan holder would agree to make payments to the depositor.

Damjanovic said he spoke with bank clients who were able to reclaim cash from their accounts that way. He did not identify the clients.

A second method, Kasalica said, allowed the owner of a company account at Atlas to open another account under the name of a second company. The first company could then transfer funds to the newly opened account. Both companies could then be reimbursed up to 50,000 euros each, said Kasalica.

“Somebody selectively has gained,” she said, referring to the beneficiaries of these schemes. “We don’t know who, and we don’t know why that was allowed.”

But it is clear who did not benefit: people who lost savings because they had no connections with Central Bank interim managers.

“If data from netting would be publicly available, that would be the basis for a class action [lawsuit] of small depositors,” Kasalica said.

“They could actually approach the court with clear arguments that they were not treated the same as other depositors within the bank.”

Illegal practices were allegedly occurring at Atlas long before the Central Bank took over administration.

The millions of euros prosecutors ordered Atlas to freeze were held in the bank’s e-commerce platform, which had been running since 2011.

By the time prosecutors ordered the freeze, about US$760 million of suspicious funds in various currencies had passed through it, according to a January 2019 report by Montenegro’s Special Police. The funds were in euros and British pounds, as well as US and Canadian dollars. (The $760 million figure is at current exchange rates.)

The 63.7 million figure is included in Atlas’ balance sheet dated Dec. 31, 2018, the month interim management began. The balance sheet on March 31 — just days before Atlas was declared bankrupt — shows that the amount had fallen to 59.3 million euros.

In response to detailed questions submitted by OCCRP to the Central Bank, the institution’s communications directorate said by email:

“All activities of the interim administration in Atlas Bank were in accordance with the law, public and transparent, as confirmed by the relevant prosecutor’s office and the Administrative Court.”

Damjanovic, the member of parliament, said he is concerned prosecutors are not carrying out a detailed forensic investigation into the suspicious e-commerce transactions.

“There’s a very big danger in that scenario,” he said, “a danger for the state if state prosecutors can’t prove the charges.”

Because Atlas is in bankruptcy, the frozen funds will be liquidated along with the rest of the bank’s assets, Kasalica explained. This means if prosecutors fail to prove the money is criminal, it cannot be reimbursed to the account holders, who could then sue the Montenegrin state to reclaim the funds.

Damjanovic said he also wants prosecutors to thoroughly investigate the approximately 21.8 million euros worth of transfers that Central Bank officials admitted took place during interim management. He said he is determined to push the issue in Parliament.

But Kasalica said she has “no hopes that proper forensic analysis would take place,” especially as the state prosecutor’s office stated in its letter that the investigation is closed.

“That answer actually was a clear indication that the prosecution is not willing to do their job, especially regarding the financial forensic engagement,” Kasalica said.