Mexico: They Got Shorty 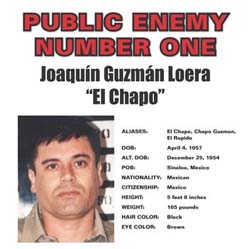 It was an anticlimactic moment in a legendarily violent career that spanned decades and cost untold lives. It will be the end if police can keep him in custody.

Guzman, 56, had been on the run since 2001, when he escaped from a high-security Mexican prison by hiding in a laundry truck. According to CNN, he avoided capture for more than a decade thanks to bribes paid to corrupt officials in Mexico.

“It is a significant arrest provided he gets extradited immediately to the United States,” Phil Jordan, a former US Drug Enforcement Administration (DEA) agent, told CNN. “If he does not get extradited, then he will be allowed to escape within a period of time.”

Jordan, who ran the DEA’s El Paso Intelligence Center, characterized Guzman’s arrest as a huge blow to the Sinaloa cartel’s operations “not only in the Americas, but Chapo Guzman had expanded to Europe. He was all over the place.”

He has enjoyed some luck along the way, or possibly some help from police sources, the AP says: police nearly caught him in 2012 at the resort town of Cabo San Lucas, where he was vacationing at the same time as an international meeting of foreign ministers attended by former US Secretary of State Hillary Clinton.

In 2013, Forbes Magazine reported Guzman’s personal fortune at more than $1 billion in an article on the world’s most powerful people, ranking him ahead of the presidents of Venezuela and France. The AP reported that rewards totaling $7 million had been offered for his capture. 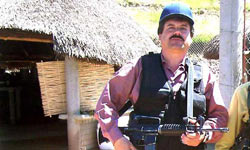 A senior US law enforcement official told the AP that the DEA and the US Marshal’s Service were “heavily involved” in Guzman’s capture, during which no shots were fired. An unidentified woman was with Guzman.

A second US source—a senior administration official—told CNN that Guzman’s arrest was “a Mexican-led operation, but one with very strong US government support. This has been a long time coming, and hopefully puts (an end) to the nonsense that this Mexican government isn’t focusing on security and that the US and Mexico aren’t working well together. They are, and we do.”

The New York Daily News called the arrest “a stellar victory in Mexico’s battle against criminal drug syndicates that control large sections of the country with violence and extortion” and noted that Guzman is “said to be responsible for the deaths of more than 10,000 people.”

Guzman faces “multiple federal drug-trafficking indictments in the US and is on the DEA’s most-wanted list,” AP reported. “His drug empire stretches throughout North American and reaches as far away as Europe and Australia. His cartel has been heavily involved in the bloody drug war that has torn through parts of Mexico for the last several years.”

Police sources told the AP that Guzman’s capture followed several weeks of intensive pursuit. In the past few months, a number of high-ranking Sinaloa members have been captured; in the last week, police picked up at least 10 lower-ranking cartel operatives.

Over the past decade, the Sinaloa cartel has grown richer and stronger, seizing trafficking routes along the US border including the cities of Juarez and Tijuana. But Guzman’s ambition came at a cost: ferocious battles with other drug cartels that left bloody bodies everywhere.

A struggle for dominance between the Sinaloa cartel and its major rival, the Zeta cartel, has taken a toll. By some estimates, more than 70,000 people have been killed since 2006, the AP reports. The conflict led to “the gruesome dumping of dozens of bodies by both organizations in their battlegrounds.”

In the immediate aftermath of Guzman’s arrest, police were saying little about how they had finally managed to track him down.

Still, said one former US law enforcement official, Guzman is no ordinary capture. “There’s no drug-trafficking organization in Mexico with the scope, the savvy, the operational ability, expertise and knowledge as the Sinaloa cartel. You’ve kind of lined yourself up the New York Yankees of the drug trafficking world.”