Behind the Demise of Somali Pirates 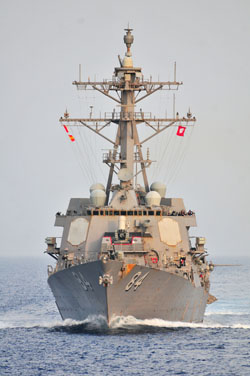 After dominating news cycles and captivating fans of maritime drama for the past five years, it appears the Somali pirates' reign of terror may be over.

In 2012, seaborne hijackers captured only five vessels, compared to 47 in 2010 and 25 in 2011, which was a year that saw a record 176 attacks. "The numbers speak for themselves," said Timo Lange, Media Operations Officer for the EU Naval Force in Somalia, who said the decrease points to "the downfall of piracy."

It began last summer, he said, and was a result of efforts in both local and international enforcement, as well as elective changes adopted by the private shipping industry. The way they teamed up to solve this seemingly impossible problem will likely serve as a prototype for managing such threats in the future.

To begin, international authorities stepped up their collaborative efforts, putting an emphasis on long-term intelligence-led operations rather than isolated shows of force. The EU Naval Force (EU NavFor) now receives Intel from NATO, the Combined Maritime Forces (CMF), the UK Maritime Trade Operations (UKMTO), and the International Maritime Bureau (IMB) Piracy Reporting Centre. That continuous flow of communication helped authorities keep track of trends and predict future actions, said Lange. "It enables us to have a much better picture of the situation internationally than when everybody works for himself," he said. That makes it easier for the agencies to stay a step ahead of the hijackers and help prevent attacks.

And their efforts at prevention received a boost in March of last year when the EU NavFor scored what Lange said was an important extension of its powers. A legal decision by the Council of the European Union granted the agency the right to destroy pirate supplies it encountered on shore, whereas previously that power was limited to the open waters. On May 15, the Force performed its first shoreline operation, destroying via aircraft a cache of equipment on the coast of Somalia where it had been gathered by pirates in preparation for a mission.

In addition to governmental efforts, the private sector moved to collaborate on fighting piracy. Shipping lines adopted en masse a comprehensive set of "best management practices" (BMP) for merchant ships, produced collaboratively by about fifteen private shipping industry and governmental organizations. Most important among them were guidelines for radio communication in the event of an attack, and directions for on-board security.

The BMP urged ships to set up physical barriers – razor or barbed wire around the ship's perimeter or high-pressured hoses – and to hire armed guards. Ship owners followed that advice. Although sea crafts in distress can theoretically rely on the support and protection of the navies that commands whichever waters they navigate, the reality is that there is rarely enough time for a third party to respond during an attempted hijacking. Hiring guards is a pricey investment for ships' owners, but is considered a worthwhile form of insurance, as no vessel with armed guards has yet to be pirated. "Pirates are deterred by this," said Lange. "As soon as they encounter a little bit of resistance, they will just look for easier prey."

The BMP also offers advice on the most strategic way to maneuver out of the path of an attack ship and guidelines for setting up a citadel, or safe room.

As the third part of this winning trifecta, Lange said, Somalian local authorities have become active in fighting piracy from within the country. Lange cited as an example the coastal town of Eyl, which was for years a pirate haven because of the town's history. Eyl, a fishing community, welcomed the early-2000s development of piracy because early pirates primarily acted to keep commercial fishing companies from poaching the town's livelihood. But, forces from the Somalian state of Puntland, of which Eyl is a part, managed to rid the area of pirate groups recently in a concerted military push, according to Lange and other officials.

Wrapping up the year on a triumphant note, maritime police in December freed the 22 sailors held hostage on the MV Iceberg I, which had been hijacked by pirates for a record 33 months.

But experts also warn against making too much of recent events. Captain Pottengal Mukundan, the director of the IMB Piracy Reporting Centre, stressed that it is too soon to declare total victory over Somali pirates. The summer rainy season may have skewed statistics, he said, and though the fall season proved quiet as well, he cautioned that it may take a few months still to offer a conclusive opinion on the state of piracy. Plus, many ships hijacked in recent years are still at sea, filled with hostage sailors only hoping they'll share the final fate of the MV Iceberg.

And another recent development may affect the long-term survival of these renegade seamen. In September Somalia held a national election for the first time in over 20 years, and many Somalis are hopeful that the new president, Hassan Sheikh, will help curb the government corruption that has propped up piracy for the past decade. "They're optimistic," said Captain Mukundan. "He is new to politics, and they like that he isn't part of the establishment."

But the culture of government corruption in Somalia is deeply entrenched, and most experts are much more cynical. "I don't think any change in the Federal government, especially a cosmetic one such as this, will have much of an effect on piracy," said Jay Bahadur, an author who spent several months living with pirates in Puntland while he wrote his book The Pirates of Somalia. "The TFG [Transitional Federal Government] is largely irrelevant in the fight against piracy, as they have never had effective control over any of the territory from which the pirates operate."

More likely, the pirates will change their tactics in the face of these new obstacles. They have adapted to changing conditions in the past, Bahadur said, and this time that could mean simply using heavier weapons.

Or it could mean getting in to a different business altogether. A June report by the U.N.'s Somalia and Eritrea Monitoring Group suggests that strengthened anti-piracy enforcement may be behind the increase it's seen in kidnapping for ransom on land. The trend toward such kidnappings "accelerated in September 2011," according to the UN's report, when "foreign tourists, aid workers and a journalist were abducted in Kenya and Somalia before being transferred to the custody of Somali pirates."