U.S. Attempts to Combat “Dark Side of Globalization” 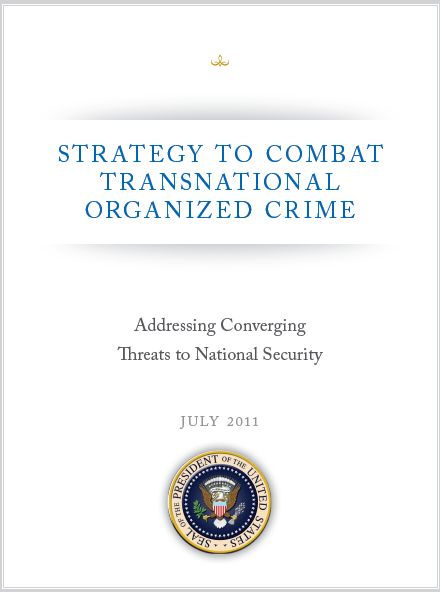 The White House Monday announced its intention to crack down on international organized crime networks that pose a threat to the security of the United States.

The Obama Administration’s new strategy to combat transnational organized crime said these groups, which can corrupt foreign governments, launder money, and illegally traffic drugs and humans, pose a great threat to American’s security because of their ties to terrorists.

“Organized crime is no longer a local or regional problem. It has become a danger to international stability,” President Obama said in a letter to Congress.

The new strategy consists of an executive order, legislative proposals, and a program with incentives for people to come forward with information about criminal gangs.  In the document, Obama asks Congress to amend racketeering laws to facilitate investigations and prosecutions of suspected gang members.

Obama’s team specifically identified crime networks from Mexico, Italy, Japan, and the former Soviet Union as a growing threat to American interests. The measure also  imposes sanctions on members of the networks, including freezing the gangs’ U.S. assets and  blocking entry into the country.

U.S. officials say that the criminal networks thrive on the high demand for illegal substances.

“The demand for illicit drugs, both in the United States and abroad, fuels the power, impunity and violence of criminal organizations around the globe,” says the document.

The decision empowers more government agencies to assist in the struggle against corruption.

“With the new executive order, U.S. Treasury Department has the authority to go after the bank accounts of international criminal networks and those individuals and entities who work with them, enable them and support them, by freezing any assets they may have within the United States, prohibiting any transactions through the U.S. financial system, and making it a crime for any U.S. person to engage in any transactions with them,” said David Cohen, the treasury’s Undersecretary for Terrorism and Financial Intelligence.

• Based predominantly in Mexico, Los Zetas has thousands of members throughout Central America, Mexico and the United States.  The gang “facilitates drug trafficking into the United States and has relationships with U.S. gangs,” the Treasury Department said.

The Zetas, founded by former Mexican special forces members, are also involved in extortion, human trafficking, intellectual property theft and murder and are widely regarded as the most violent of Mexico’s drug cartels.

• The Camorra, based in Italy, is believed to be the largest organized crime network in Italy.  It consists of a group of clans from the territory of Naples who specialize in counterfeiting money and selling narcotics.  According to the U.S. government, it earns up to 10 percent of its $25 billion annual profit selling counterfeit CDs, DVDs, clothing, power tools and software in the United States and Europe. PLEASE double check that $25 billion figure. I just think somebody’s lying.

• The Japanese Yakuza, has more than 80,000 members who sell methamphetamine and the sex on the black market.  Their revenue comes from sex tourism, human trafficking, and the exploitation of children and women. In the United States, the network is active in drug trafficking and money laundering.

• The Brothers’ Circle, is a multi-ethnic group based primarily in the countries of the former Soviet Union. Its scope extends into the Middle East, Africa and Latin America.

U.S. Officials emphasize the way organized crime has evolved to pose a large threat due to linkages to terrorist organizations, by supplying drugs, weapons, or ways to launder money.

“In years past, [transnational organized crime] was largely regional in scope, hierarchically structured, and had only occasional links to terrorism,” says the document.  “Today’s criminal networks are fluid, striking new alliances with other networks around the world and engaging in a wide range of illicit activities, including cybercrime and providing support for terrorism.”

The Increasing Role of Internet in Organized Crime

The strategy identified the growing threat of cybercrime -- crimes perpetrated through the internet. Cohen calls this “a dark side of globalization.” One goal of the strategy, he says, is to modernize law enforcement organizations  to be able to keep track of technology-savvy crime groups. . This will also involve intensive collaboration with the treasury department.

According to the strategy document, Central European cybercrime networks are estimated to have robbed Americans of about $1 billion during a one-year period, all on the internet.

“Virtually every transnational criminal organization and its enterprises are connected and enabled by information systems technologies, making cybercrime a substantially more important concern,” the document states. “Through cybercrime, transnational criminal organizations pose a significant threat to financial and trust systems -- banking, stock markets, e-currency, and value and credit card services -- on which the world economy depends.”

Obama said he seeks allies around the world.

“While this Strategy is intended to assist the United States Government in combating transnational crime, it also serves as an invitation for enhanced international cooperation.  We encourage our partners and allies to echo the commitment we have made here and join in building a new framework for international cooperation to protect all our citizens from the violence, harm, and exploitation wrought by transnational organized crime.”