Every quarter, members of OCCRP’s Accomplice program submit questions to an OCCRP journalist about one of their investigations. For our first Q&A, Co-Founder Paul Radu answered questions about our recent investigation into a Romanian criminal syndicate that we’ve dubbed the “Riviera Maya gang,” which made over 1 billion dollars from rigged ATMs, mainly in Mexico.

OCCRP Accomplices submitted questions about the investigation and Radu’s approach to reporting.

It takes a network to fight a network. So we're enlisting OCCRP Accomplices in the fight for truth, justice, and accountability.

Why did this gang from Romania choose Mexico as its home base?

The infrastructure for this business was set up by a fugitive convicted for skimming ATMs in Romania with arrest warrants in the EU.

Mexico was a perfect place to hide because the corruption levels in Mexico and Romania are similar. Also, both countries speak Latin-based languages, so it is easy for Romanians to learn Spanish.

Were you ever personally threatened by those who you investigated?

I wasn’t personally threatened. One of the [reporting] team members received some threats, but for security reasons we can’t say more about that for now.

This is an expansive investigation. What’s your favorite tidbit of information that you uncovered?

Probably this copy of a forged passport. The gang used this document to set up Top Life Servicios, the front company they used to set up rigged ATMs.

Credit: Sergiu Brega/OCCRP The forged passport (left) used by the gang to set up a front company in Mexico. It’s in the name of “Paul Daniel Ionete,” a person the gang knew back in their hometown of Craiova, but features a photograph of gang member Adrian Tiugan, whose temporary Mexican residency card can be seen at right.

They took a temporary Romanian passport that was issued to a Romanian citizen who actually went to jail for drug trafficking. Then one of the gang leaders — the fugitive convicted for skimming and organized crime — put his photo on it and extended the validity from one year to five years. But if you look carefully at the passport, the forgery is obvious because the name didn’t match the photo. Each passport has a code and you can also see the real one-year validity from this sequence of numbers.

The interesting thing was that our Mexican partners got his document from Freedom of Information requests to various municipalities and states in Mexico. But most municipalities redacted the passports so we couldn’t see the information. However, one municipality didn’t, and that’s how I was able to identify that it was a forgery.

The gang stole money by physically withdrawing cash from ATMs. Why didn’t ATM cameras catch them?

When the gang used copied cards in Mexico [to withdraw money], they used their own ATMs. So they were the ones with access to the camera footage. 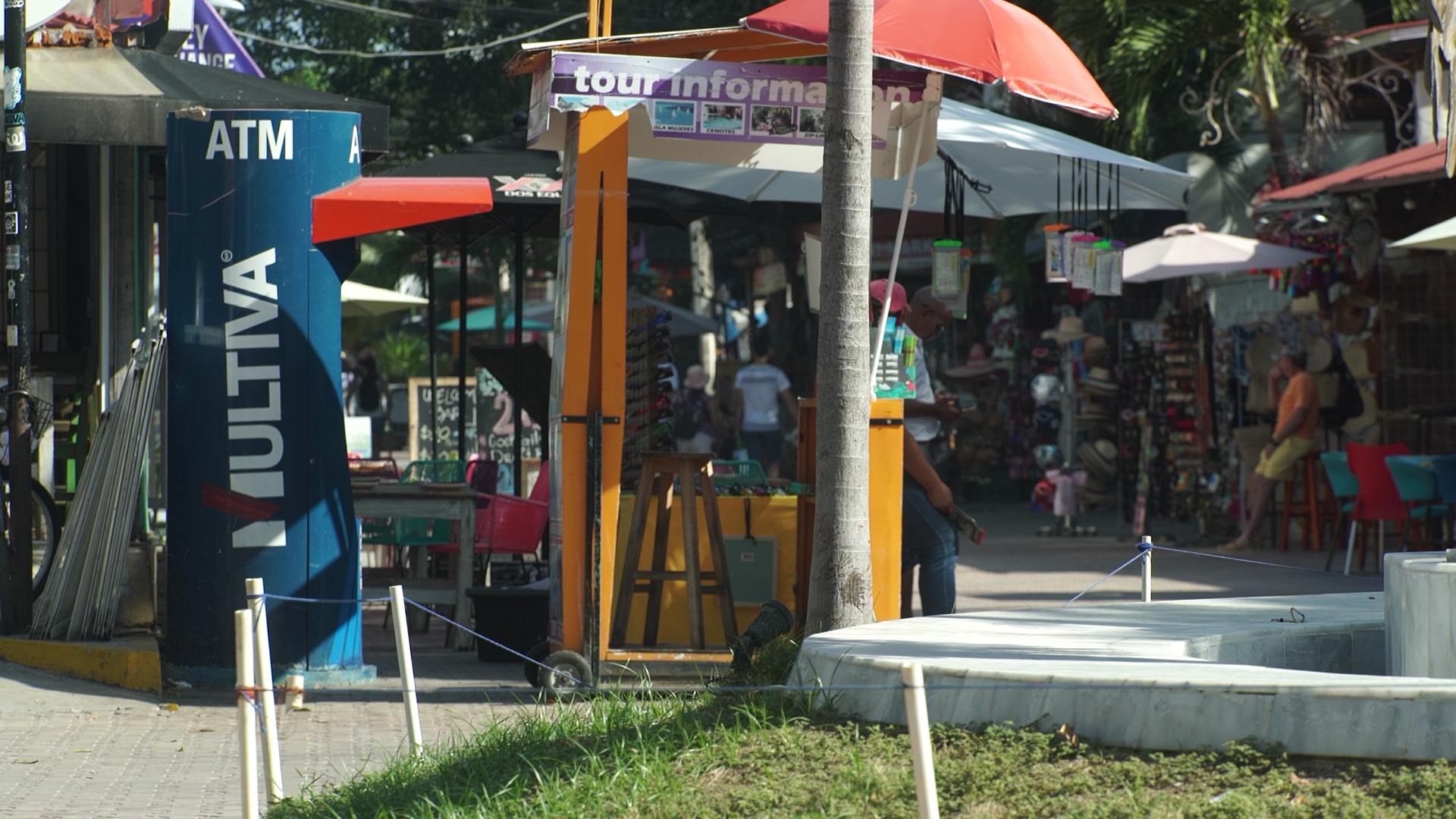 Credit: OCCRP One of many Multiva ATMs in the popular tourist destination of Playa del Carmen, Quintana Roo, Mexico.

Now, it’s a different story when they stole money outside of Mexico. We’ve seen skimmers use disguises, caps, wigs, and sunglasses to escape being identified on camera. I’m unaware of any instance when they were caught because of ATM cameras.

People were caught skimming in Barbados and in Indonesia, but only because Romanian police tracked their movements and alerted local authorities when they bought plane tickets to those countries.

Was there a critical mistake that led to the Riviera Maya gang being caught?

There were three mistakes. One was the passport. The fugitive used the forged document not only to set up Top Life Servicos (the front company) but also to get a Mexican ID.

The second mistake was that they killed one of their own. The gang killed a [former] member over a feud, but you can’t really hide someone being shot in the head in a major city like Cancun. That brought a lot of heat onto the gang: the Mexican police as well as journalists started looking into them.

The third mistake was uncovered by Brian Krebs, an American journalist, who noticed that many of the [suspicious] ATMs beamed out a bluetooth signal. The gang used bluetooth to collect card data, but the network was public, so anyone could see it from their phones.

They thought they were being smart by using this shortcut. Bluetooth made their lives easier but it also left them vulnerable.

Were the proceeds laundered? Did you speak with any accountants or attorneys who helped conceal the laundered money?

Many of the proceeds were laundered. We were able to track down money invested in property in Romania, Mexico, and the United States — blocks of flats, hotels, land, even a golf course — more on this will be coming out so I’ll save that.

We sent letters to accountants, attorneys, and even judges who allegedly helped them conceal money laundering, but we haven’t received any answers from them.

How is it that journalists are regularly able to uncover activities that police know nothing about?

The Riviera Maya gang project is a great example of the power and possibility of investigative reporting and some of the limits of law enforcement.

We put together a transnational team in Brazil, Mexico, Colombia, Romania, and Indonesia who exchanged information very quickly, and in a matter of months, untangled what this network was about.

Law enforcement, mainly in Romania and Mexico, had bits of information but the cooperation between agencies was very slow. So while they started investigating this group some time ago, they weren’t able to put together the pieces in a timely manner or stop them from developing a criminal infrastructure.

This speaks to the fact that law enforcement is always confined to national borders. They are funded by taxpayer money and must defend their nation’s interest. But criminals work across borders and don’t care about nation-states — and the same goes for journalists. We report in teams from different frontiers. This is why sometimes it’s easier for journalists to expose criminal enterprises across continents.

How do you marshall the facts and distill an accurate understanding of the big picture when hundreds of interviews and thousands of documents need to be reviewed?

You need to work in stages for an investigation this big. The first is the collection stage, where you gather documents and interviews. Throughout this process, it’s critical that journalists are communicating. That’s why you need to have a coordinator for a project as large as the Riviera Maya gang investigation — someone who keeps tabs on what reporters are doing. If a reporter finds someone who may be important, the coordinator needs to make sure that name is searched by reporters in other countries. You conduct research on a national level in order to connect the dots on an international level.

Then for the second stage, the coordinator and reporters can start visualizing the network being investigated. That helps you not only see the people involved, but also the crimes being committed, which might lead you to other players.

For the final third of the project, you want to start defining stories that are actually in the public interest. For a story about ATM skimming, you want to be able to tell the public exactly how the gang operated, why it’s important, and maybe how they can avoid this kind of fraud.

How do you avoid “groupthink” and stay objective in your reporting?

The main thing is to challenge every finding you think you’ve uncovered. When you have a cross-cultural team like this one, you realize that there are a variety of opinions. Sometimes there is arguing, and that’s good.

You must always be open to the idea of errors in your reporting. What’s crucial about OCCRP’s model is that our fact-checkers are not part of the investigative process. They come in at the end with fresh eyes, fresh minds — often from completely different geographic locations and different backgrounds, and can challenge the reporting.

Aubrey Belford Answers Questions about Investigations into the U.S. Administration